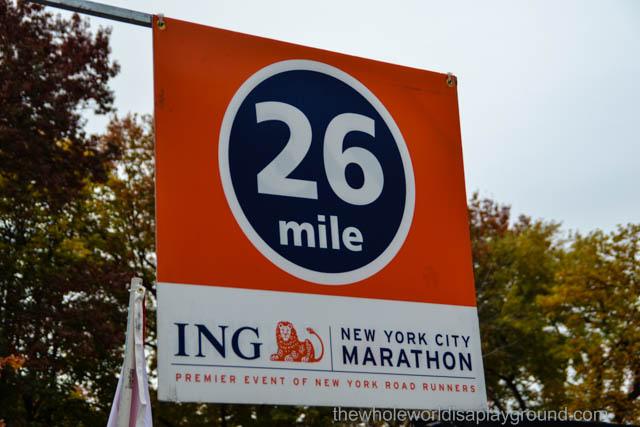 The 2013 New York City marathon: it’s been two years in the making and has taken 16 weeks and over 450 miles of hardcore training since July. On November 3, 2013 I finally got the chance to earn my marathon stripes and the coveted New York marathon medal.

I should start this race report by disclosing that the wifey has handed over the running section of thewholeworldisaplayground to me for the 2013 New York marathon action. This is a big day in thewholeworldisaplayground household, I’m usually only trusted with the photographs and technical workings so I’m determined to demonstrate how clever and witty I can be. That’s the plan anyway.

So here’s my recap of the ING 2013 New York City marathon:

We arrived in New York on Friday evening ridiculously excited as it was our first visit since we left our New York lives and hit the road at the end of 2012. A last minute injury ruled the wifey out of the race and she assumed the role of my Number 1 supporter and motivator.

Jetlag meant we we were able to take an early morning stroll up to the park on Saturday to check out the route and see the finish line all set up. Due to the increased security we could only get to within 400 yards of the actual finish line but it was great to see everything set up…even the much anticipated/dreaded 26 mile marker!

We did most of our running in Central Park while we were training for the 2012 NYC marathon, so I was aware of every little bump and hill the park had to offer. The last 400 yards to the finish line were flanked by the national flags of all the runners which looked great against the Autumn leaves and the last incline up to the finish line. It was great to see the Irish flag flying in the wind!

It was really nice to take some time out and appreciate the finish line as I had no idea what state I would be the next time I saw it! 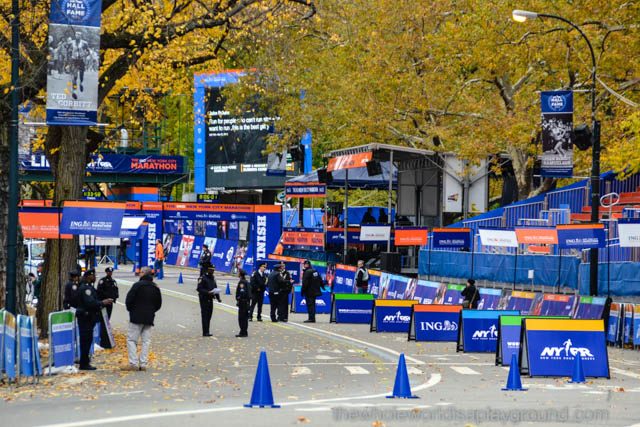 The marathon expo is held each year in the Javits Center on 11th Avenue between 34th street and 39th street along the Hudson River. The expo was open from 9am on the Saturday so we decided to head over early with the aim of beating the crowds. Free shuttle buses run each day to and from the expo to a few locations around the city (mostly mid-town hotels and Penn and Grand Central Station). We were too early for the buses so we walked over grabbing some much needed pre marathon carbs along the way! 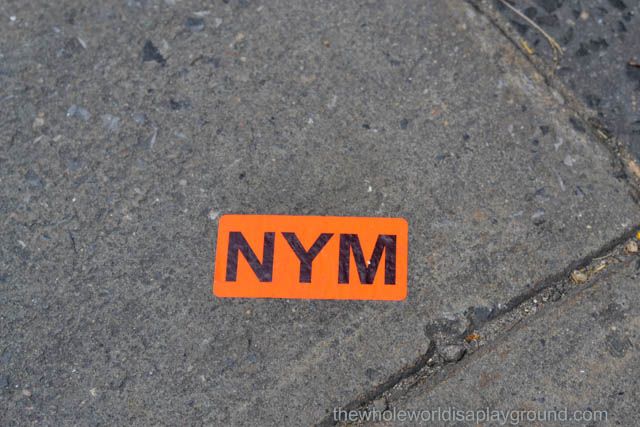 Arriving at the Expo:

The lines had started by the time we arrived at the expo around 9am, and with the extra security screening it took about 30 minutes to get into the actual expo.

Arrival at the expo:

A flash of our ID and race entries and onto bib pick-up:

We had a wander around the rest of the expo soaking up the pre marathon excitement:

And back to the hotel: 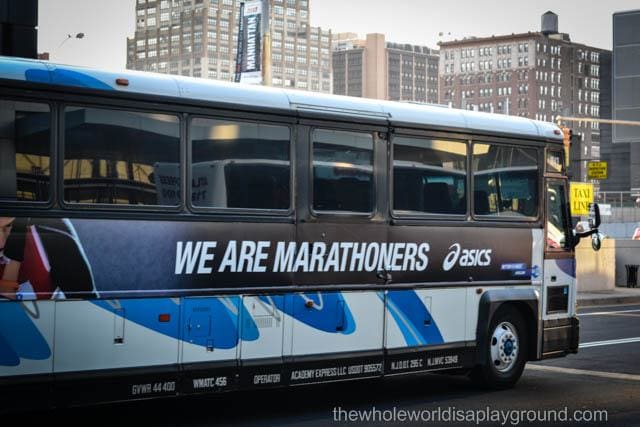 We spent the rest of the day catching up with friends and I enjoyed a beer or four to chill out. Without walking anywhere of course!

It’s an early start on race day but at least there was an extra hour in bed with the clock change. I woke up at 3am and quietly contemplated my race strategy. The wifey tells this story slightly differently. Her version involves me chatting incessantly about my race strategy from 3am while she tried to ignore me and keep sleeping.

Getting to the start line

There are only two ways to get to the start line of the New York marathon in Ford Wadsworth, Staten Island – either by official marathon buses or via the Staten Island Ferry. I travelled with an International Travel Partner which only gave the bus as an option. This was perfect for me as the bus pickup was at the Public Library at 42nd and 5th was close to the hotel we were staying at in Times Square.

After a ‘hearty’ breakfast of instant porridge (which is as good as you’d expect) I packed my bag and headed out to the bus pick-up a few blocks away. It was surreal seeing runners emerge from buildings along the way. It was still pitch black and the trickle of people slowly became a fully fledged concert crowd by the time I made it to the bus stop.

By 6am I was on a coach bound for Staten Island.

A few friends who had run the New York marathon had given me lots of advice about the race village. The best was to bring trash bags to wear in the village to keep warm. We had been warned about the more stringent security measures in reaction to the tragic events in the Boston marathon earlier in the year. Much to my bewilderment my innocent trash bag met an untimely end in the hands of an over zealous official at the check point despite not being a prohibited item. I was less than thrilled at the prospect of sitting on the damp ground for 3 hours in the freezing cold. Bear in mind we arrived at Fort Wadsworth at around 7am and my wave didn’t start until 10.30am It’s a long time to be standing/sitting around in the cold.

They almost got my BodyGlide too but there was no way I was giving it up having seen various chaffed body parts at previous races. I was not taking any chances on that one!

The race village is split into three areas: blue, green and orange. Each wave had an allocation of runners from each race village. I was assigned to Wave 3 and the Blue race village with a 10:30am start, hence I had some waiting to do! 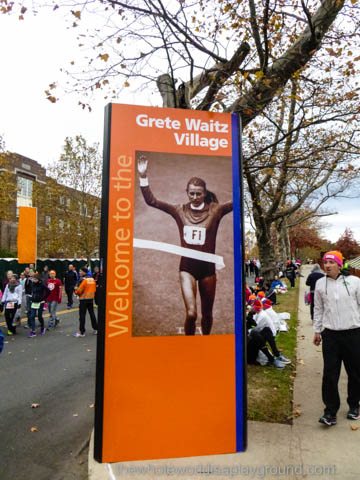 There isn’t a lot to do in Fort Wadsworth. There are food and drink stations and plenty of bathrooms (1,700 apparently!). There was lots of coffee, hot water, tea, bagels and energy bars on offer and so there were none of the usual race problems of queues for the loo or lack of food/snacks.

Mostly people tried to find a quiet area to rest ahead of the call to enter the race corrals. These runners were catching up on some sleep before the race. Bear in mind it was freezing cold…seriously! 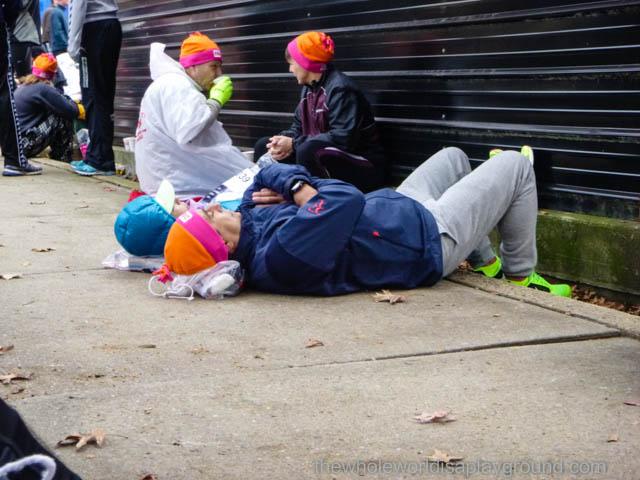 The organizers do their best to keep everyone fed and entertained but staying warm and relaxed in the race village is pretty difficult.

I opted for the No Baggage option which meant I could have an early exit from the park and would be provided with a lined poncho at the finish line. There is also the option of checking in an official marathon bag which is then transported to the finish line for pick up after the race.

The excitement levels picked up as the race got underway: first with the men’s wheelchair division at 8:30am, then the professional women. The professional men kick off the mass start to the race.

Eventually the 10:30am corral was called to the start line. At this stage everyone in the corral began shedding their extra layers and making final race preparations. Most of us kept our hats and gloves on for warmth. Lots of runners were sporting the classy pink and orange beanies that Dunkin Donuts were handing out in the race village. Not that I was complaining about the pink hat; I completely forgot to bring my own warm hat. And I looked pretty cool. Just sayin!

The crowd started the walk to the start line and I was on my way!

To read my New York marathon race report, click here. For some of my favourite funny sights and signs along the way, click here. 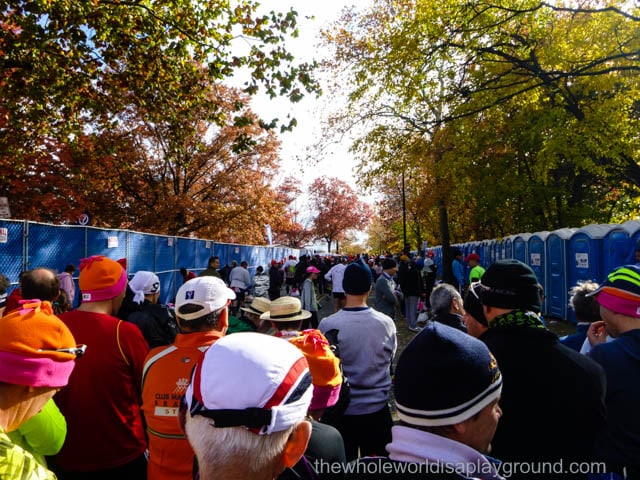