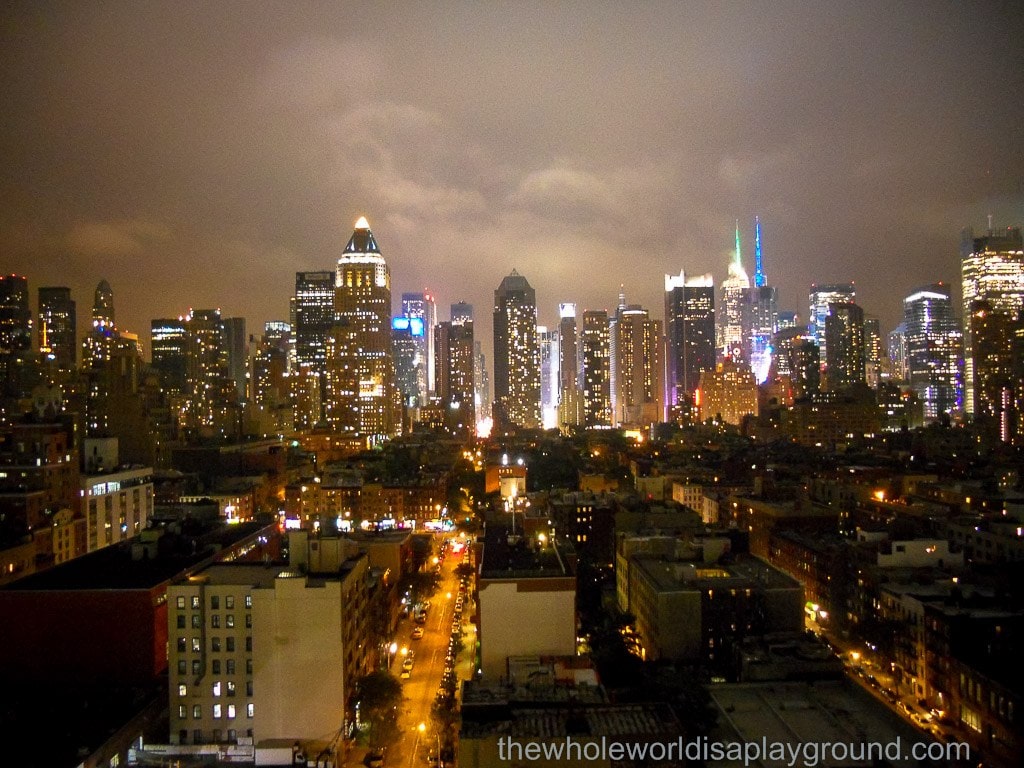 If you’ve been following The Whole World is a Playground you’ll know we’re partial to the occasional cocktail on our travels. Our love for cocktails began in Manhattan and we still believe there ain’t no cocktail like a New York cocktail! Having sampled a small (ahem!) selection in New York City over the years we’ve acquired a long list of fabulous must go venues!

So, as a treat for all you travellers, here are some of our favourite places to go for a drink when we’re hitting the New York sights and fancy somewhere a little special to recharge our batteries! Prepare to be wowed!

If you have discovered any contenders for the best bar on the NYC sightseeing trail let us know in the comments below! 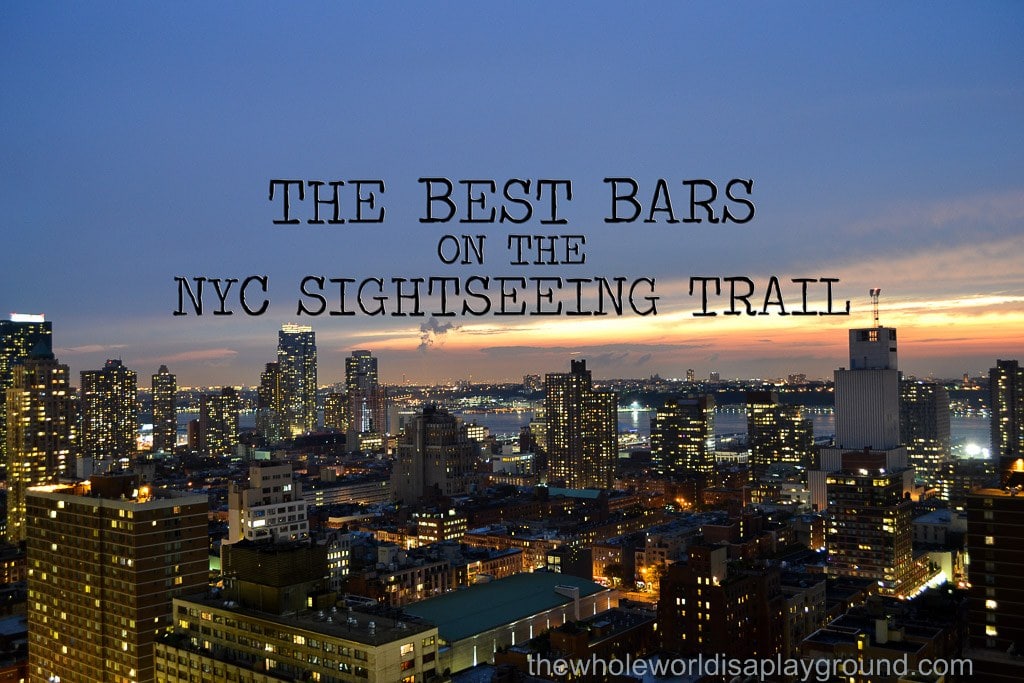 1 | WHEN IN TIMES SQUARE: THE R LOUNGE

The R Lounge has my all time favourite New York view. With its floor to ceiling windows this hidden gem is the most incredible vantage point from which to enjoy Times Square. The view is so spectacular that on New Year’s Eve the window seats sell for up to $5,000 per person!

Book a table, order a Cosmopolitan and sit back and enjoy being wowed by the beautiful bright lights of the crossroads of the world. 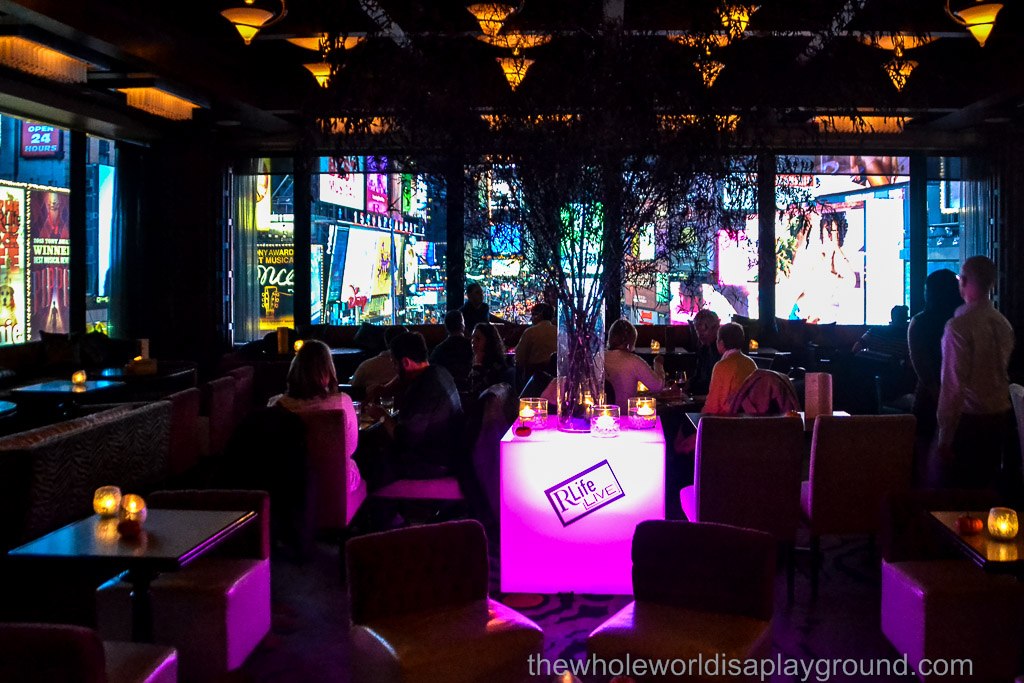 2 | WHEN AT MUSEUM MILE: THE MET ROOF GARDEN

The Met is one of the greatest museums in New York and what better way to round off a morning of culture than a Martini stop at the rooftop bar. The uninterrupted views of Central Park are spectacular and are beautifully framed by the backdrop of the city skyline.

The rooftop doubles as a sculpture garden and 71 year old New Yorker Dan Graham will create the art for the 2014 garden, on display from April 29, 2014. Sculptures, views and art, what more could you want?!

Remember, admission fees are recommended amounts so don’t feel under pressure to pay the full whack if you’re just stopping by for a drink.

3 | WHEN IN CENTRAL PARK: LOEB BOATHOUSE

Central Park is my New York happy place. So where better to retreat to on a sunny day than the iconic Central Park Boathouse? Grab an outdoor table and lose yourself in the the stunning lake and skyline views. 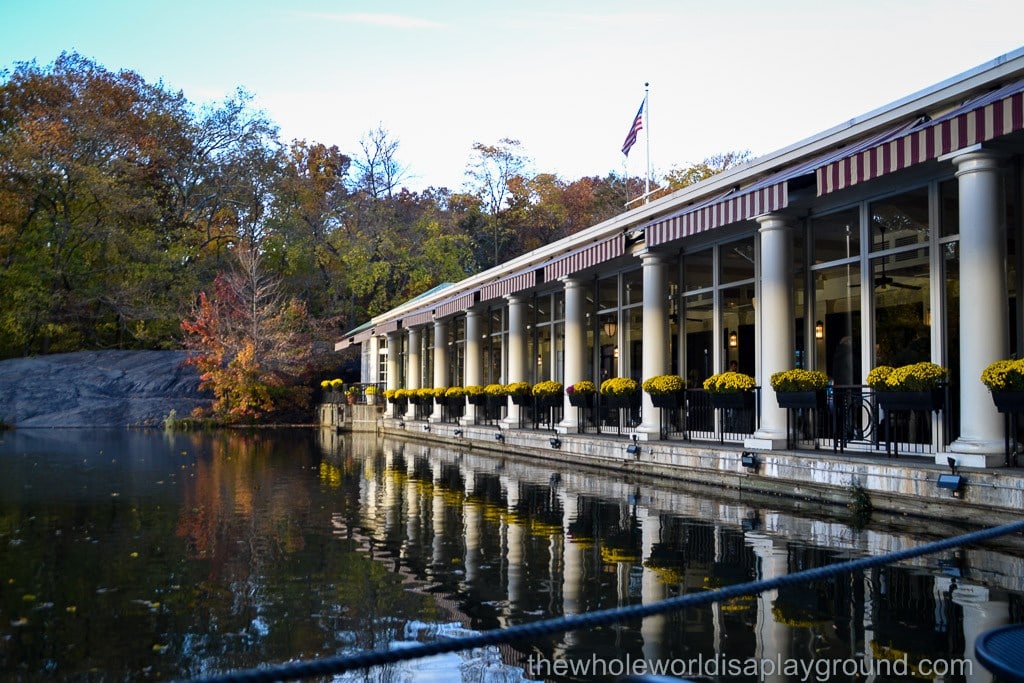 If you’re feeling energetic after the sit down, rent a row boat and explore the lake. Row, row, row your boat! 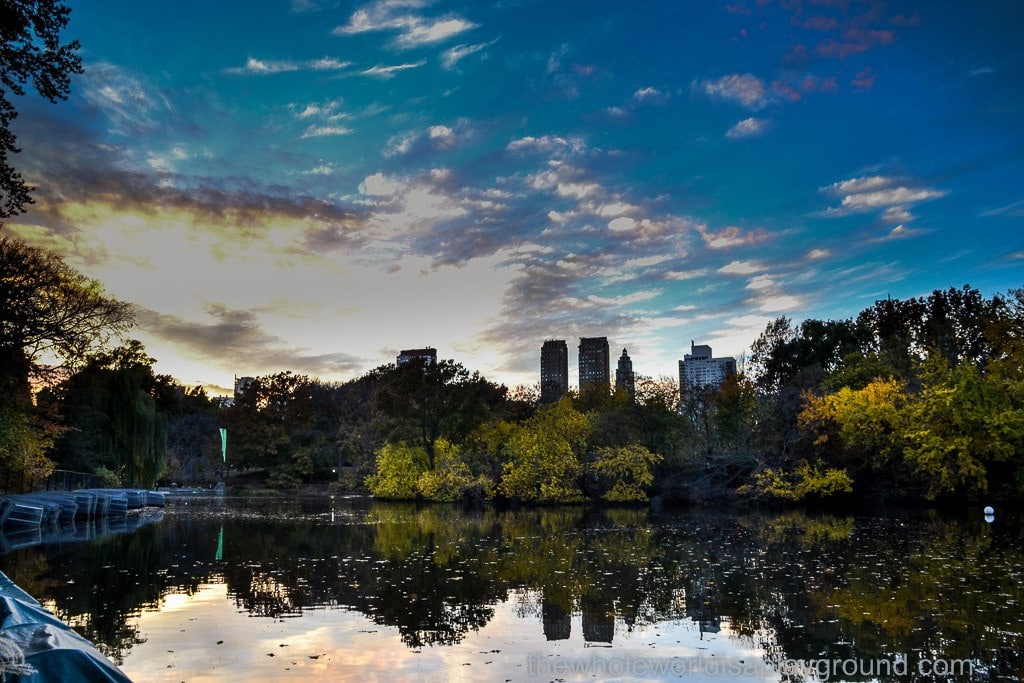 4 | WHEN AT COLUMBUS CIRCLE: LOBBY LOUNGE AT THE MANDARIN ORIENTAL

The Lobby Lounge, on the 35th floor of the Mandarin Oriental, offers an elegant retreat from the hustle and bustle of the city together with spectacular views of Columbus Circle and Central Park. The cocktails are on the pricey side, even by New York standards, but for me, it’s worth it for the views and the atmosphere. Book a table and try your luck at securing a window seat.

5 | WHEN AT GRAND CENTRAL: THE CAMPBELL APARTMENT

I always feel like I’m in a movie scene when I pass through the iconic Grand Central Terminal. The Campbell Apartment is hidden in the corner of the station and is housed in the restored offices of American tycoon John W. Campbell. The speakeasy is perfect for a time out from the crazy commuter rush and to enjoy a goblet of the Prohibition Punch. My favourite time to visit is on a Saturday afternoon when the commuters have left the building!

PS I dare you not to think of the famous Gossip Girl Scene where Serena and Nate acquaint themselves on the bar! 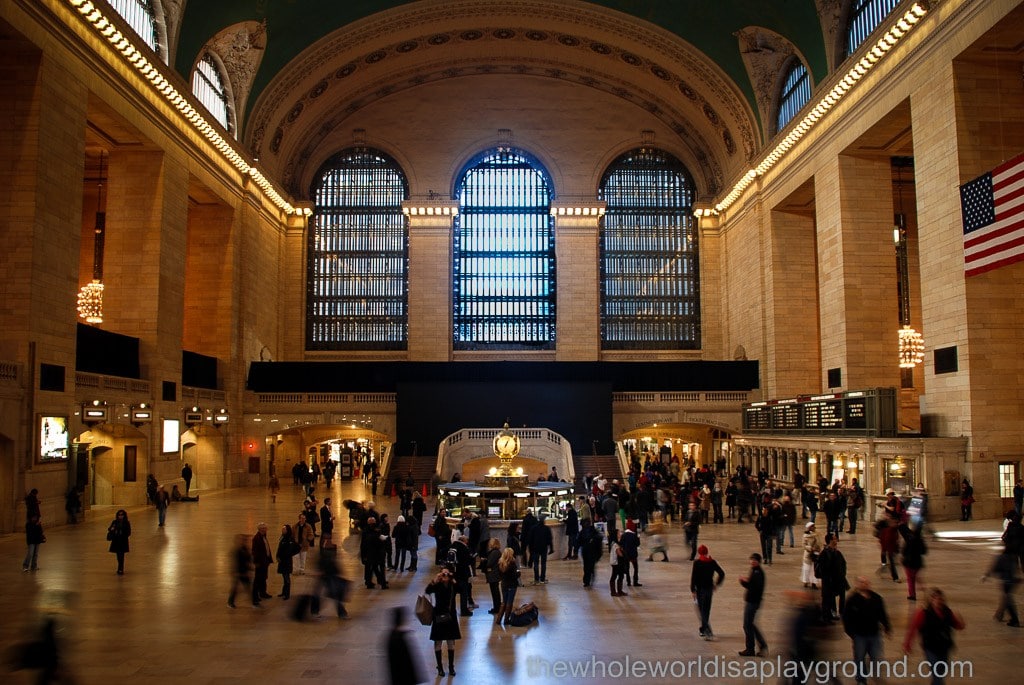 Byrant Park is synonymous with sunny lunch breaks, intense chess games, open air movies and the New York Public Library. The rooftop at the Byrant Park Grill is an amazing spot for some drinks, people watching and absorbing the beauty of the park. It’s the perfect spot for a sunny afternoon. 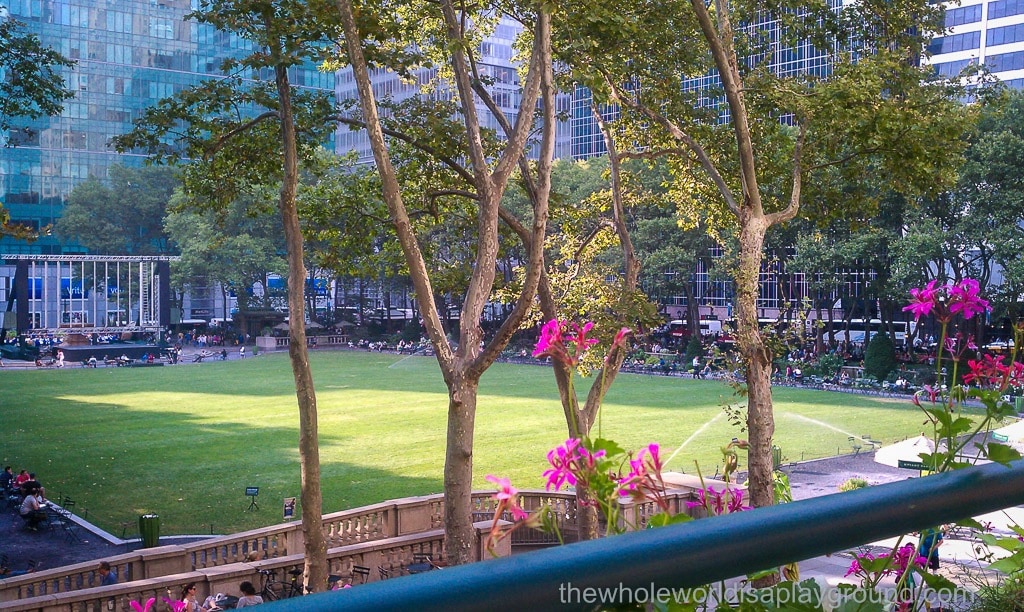 7 | WHEN IN THE FINANCIAL DISTRICT: THE DEAD RABBIT

Whether it’s to check out Wall Street and Battery Park or to indulge in a spot of retail therapy at Century 21, chances are you are going to be in Lower Manhattan. And if you are in the neighbourhood be sure to take a detour to the Dead Rabbit, owned by Irish duo Sean Muldoon and Jack McGarry who previously put the Merchant Hotel, Belfast on the map as a renowned cocktail destination. 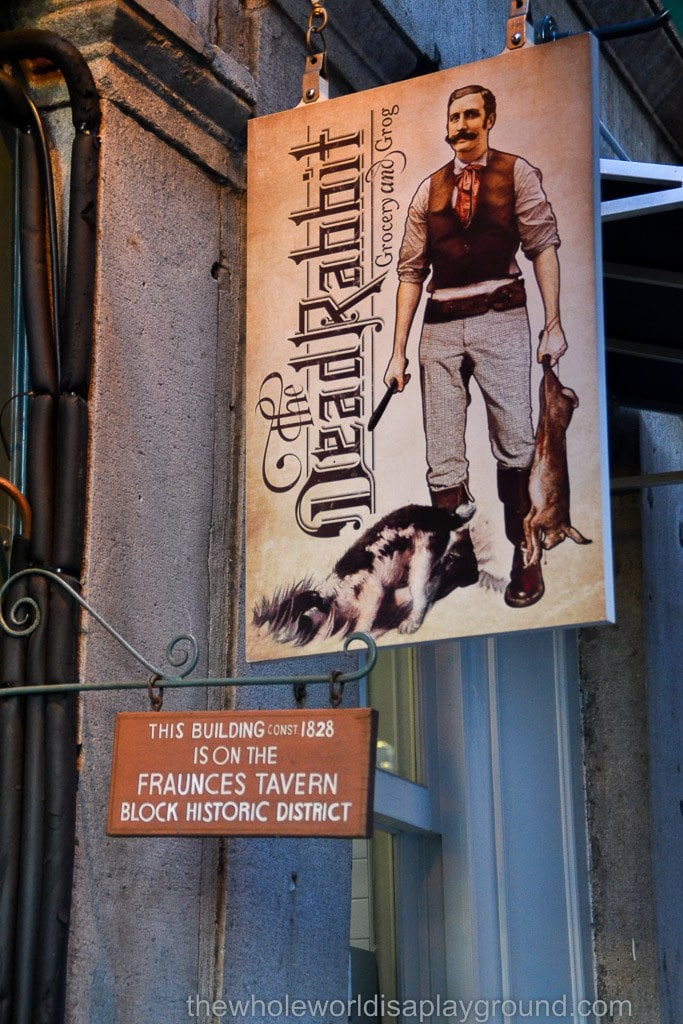 The menu takes the form of a graphic novel detailing the life of John Morrissey, whose 19th Century New York Street Gang, The Dead Rabbits, lends its name to the pub and whose story is immortalized in the movie Gangs of New York. Downstairs is the Taproom, a sawdust covered craft beer and whiskey bar, and upstairs the Parlor, serving 72 historical cocktails. Spoiled for choice!

Another rooftop bar, another spectacular view of the Big Apple! The views of the Empire State Building are spectacular.  The heated rooftop at 230 Fifth is perfect even on a chilly evening when you can wrap up in one of the signature red snuggies, order a hot chocolate and curl up under one of the heated lamps.

The vibe can be more nightclub oriented at the weekend so go early in the week to enjoy a quiet drink and avoid the weekend queues.

It might not be the coolest thing to admit but I’m a Midtown girl at heart. So if you find yourself in the vicinity of 54th and Broadway on a Tuesday evening book a table at the cosy and intimate Flute Champagne Bar in Midtown. 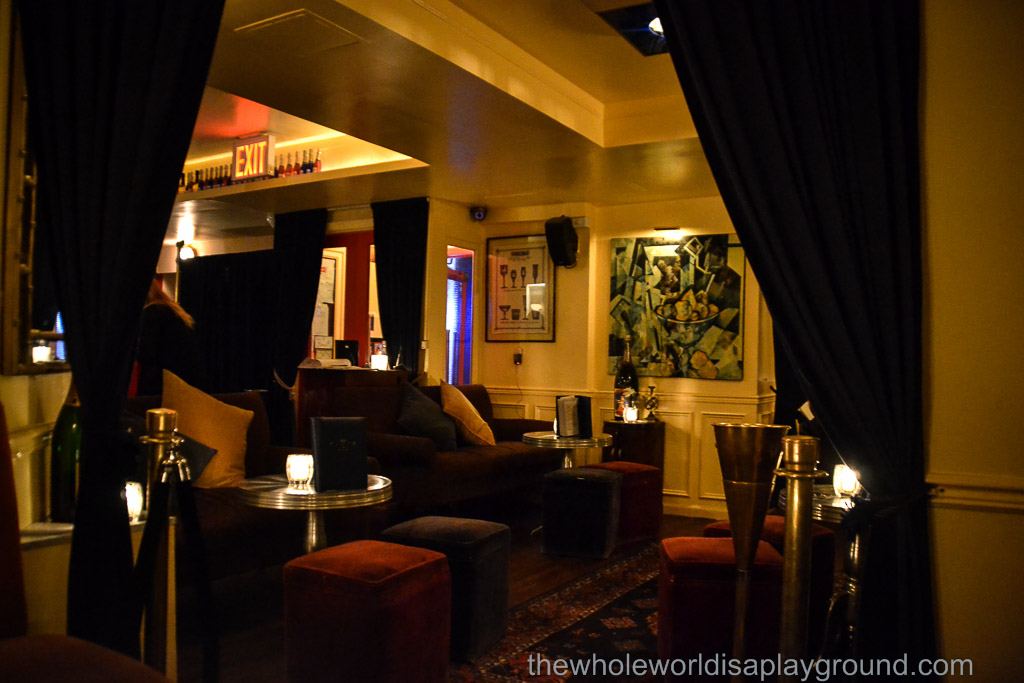 The champagne mojito is one of my favourite cocktails in New York and it’s best sampled during Tuesday evening happy hour at the bar. All drinks, including champagne, are 2 for 1 between 5pm and 8pm. 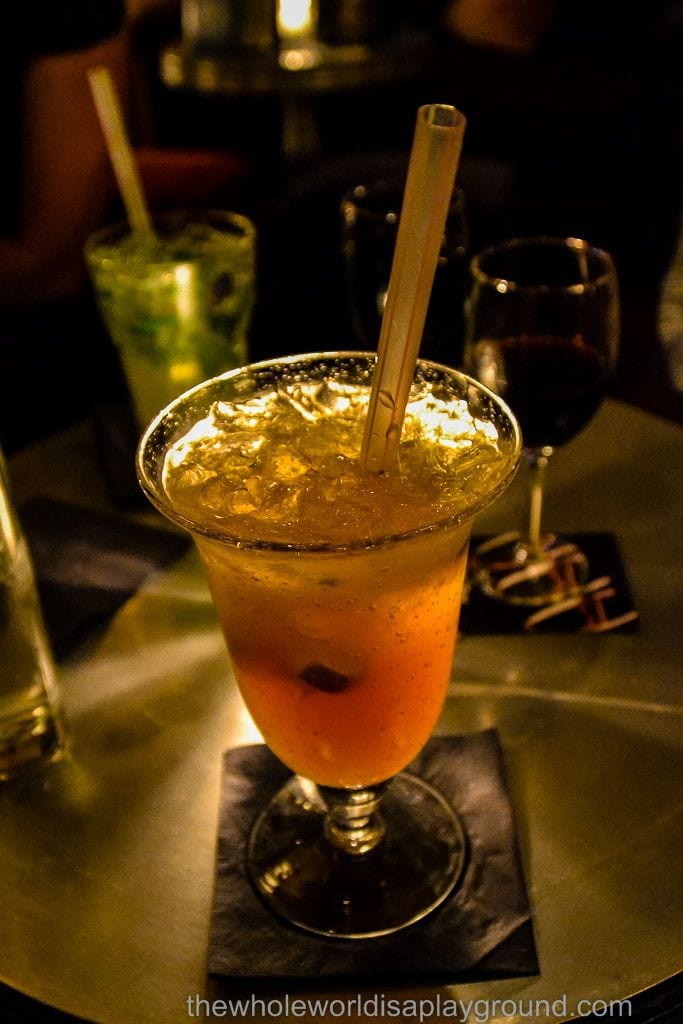 
10 | WHEN IN THE THEATRE DISTRICT: LANTERN’S KEEP

Tucked away behind the lobby of the Iroquois Hotel, the intimate Lantern’s Keep is in stark contrast to its Times Square surroundings. The vintage, Parisian inspired salon is devoted to the artful enjoyment of cocktails and the marble tables, blue velvet chairs and dark wood are the perfect decor in which to do so. Tell the server your favourite spirit and let them mix up something magical. And check out the ice cubes, in some cocktails they’re nearly as special as the drinks! Reserve a table as the small lounge can get very busy.

The Press Lounge at Ink 48 offers unrivalled views of Manhattan and the Hudson River. It’s a short hop from the Hudson River Park, the Intrepid Sea, Air and Space Museum and the Circle Line cruise terminal or a quick cab ride from the West 30th Street exit from the beautiful New York City High Line. Enjoy the ambiance of the cosy rooftop and the stunning views across Manhattan with a cocktail in hand!

12 | WHEN THE SUN IS SHINING: THE FRYING PAN

OK, so it’s a not as fancy as the other venues on the list but the rustic Frying Pan is the ultimate New York sunny day destination and is definitely worth a visit. Once a floating lighthouse, the sunken lightship was salvaged and is now docked close to Chelsea Piers. So grab a bucket of beer or a pitcher of sangria and enjoy the breeze and gorgeous views over the Hudson River.

13 | WHEN AT THE ROCKEFELLER: THE RAINBOW ROOM

The Rainbow Room cocktail lounge sits an ear popping 65 floors above the beautiful New York City, meant only one thing: amazing views while sipping cocktails in the sky! The floor to ceiling windows provide panoramic views of 3 sides of the city: Central Park and the George Washington Bridge are visible to the north and the Empire State and Freedom Tower to the south. The view from SixtyFive simply took our breath away. Read more about our visit to the Rainbow Room here! 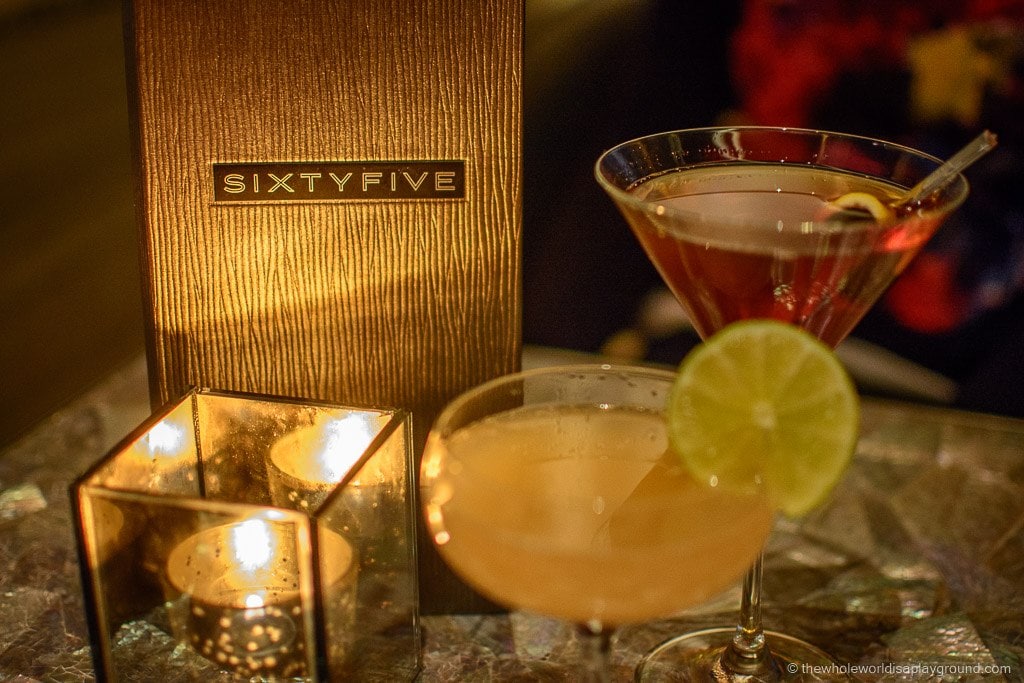 There you have it, 13 New York gems to ensure you will never go thirsty on the sightseeing trail!

20 thoughts on “13 of the Best Bars on the New York City Sightseeing Trail!”