The Best Photo Locations in Budapest

With it’s heady mix of historic monuments, ornamental thermal baths, gritty ruin bars and beautiful architecture Budapest has a huge variety of iconic photo spots just waiting to be captured. From what was originally two separate cities separated by the Danube river, Buda and Pest, Budapest is a must visit for any photographer. After a number of trips to this fantastic city we’ve put together a list of our 15 best photo locations in Budapest: it’s our guide on where to take the best pictures of Budapest!

For one of the best views of Budapest make the trip up the top of Castle Hill on the Buda side of the River to the neo-Romanesque terrace  known as Fisherman’s Bastion. The walkway on top of the terrace is one of the best viewing points in the city and offers panoramic views across the Danube to the Pest side. The views of the Hungarian parliament are breathtaking.

Budapest photography tip: some of the best shots can be captured using the natural frames of the terrace. 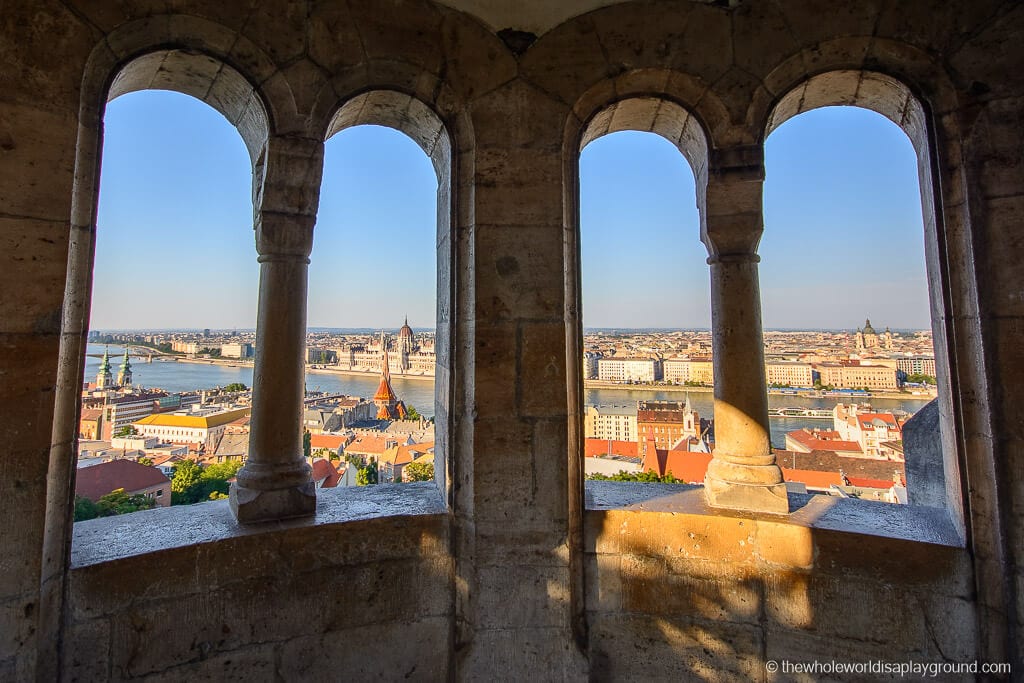 The natural frames of the terrace make for some great images

The terrace is also a great spot to photograph the unique roof of Matthias Church with it’s striking multi-coloured tiled roof which stands beside Fisherman’s Bastion. The kaleidoscope of the colour tiled roof of Matthias church is the crown of the city: it’s architecturally beautiful and almost glistens on sunny Budapest day. 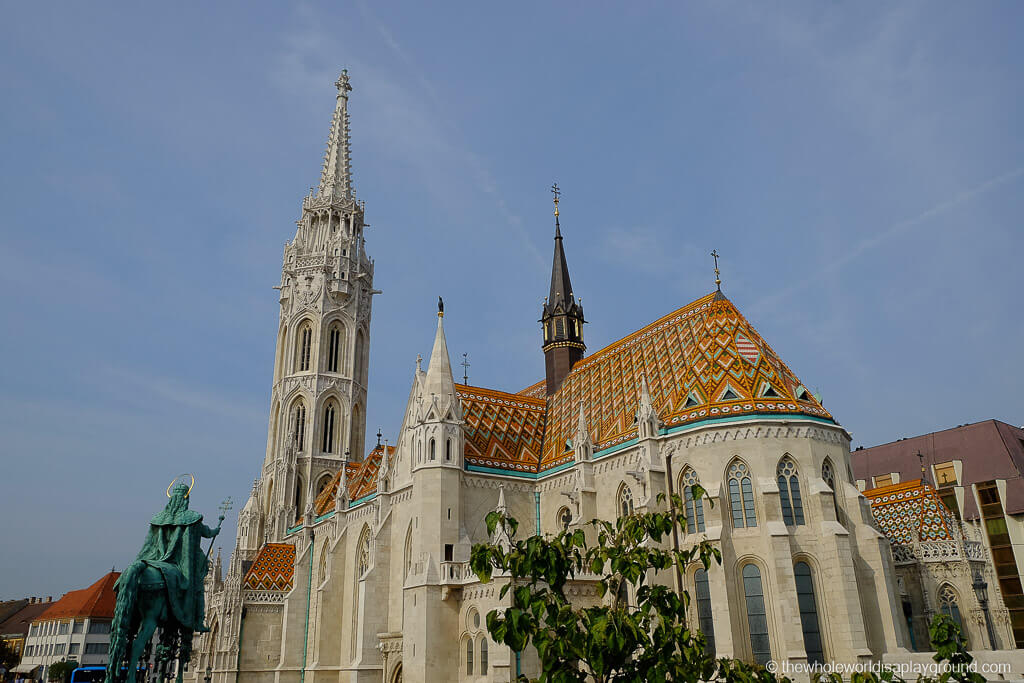 2 | The Chain Bridge at Night

This stunning bridge is one of the most iconic landmarks in Budapest. It spans the Danube, linking Buda and Pest, and is absolutely beautiful with its majestic guardian lions protecting the bridge. It features on almost every postcard and in every article about Budapest as it’s one of the most photogenic sights in the city. We found that the bridge is best photographed at night when the traffic eases and the bridge is illuminated against the beautiful backdrop of Buda castle.

The best location for a photograph is directly in front of the bridge at road level on the Pest side. From here you can get some beautiful symmetrical shots of the bridge and shots of the stunning lions guarding the bridge with Buda Castle in the background. There is a small island in the middle of the road where you can avoid the traffic and use a tripod. Using a cable release on your camera allows you to time the exposures perfectly for passing traffic in the shot. 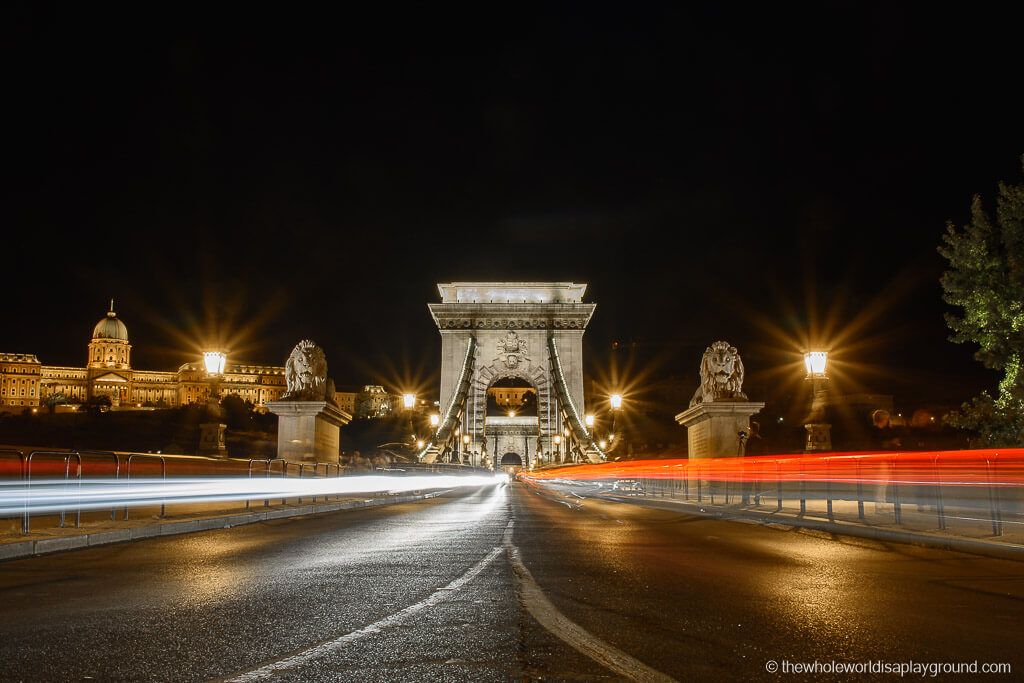 Another great location for images of the Chain bridge is from the banks of the river just north of the bridge itself. From here you get an alternative angle of the bridge against the backdrop of Buda Castle on the hill. 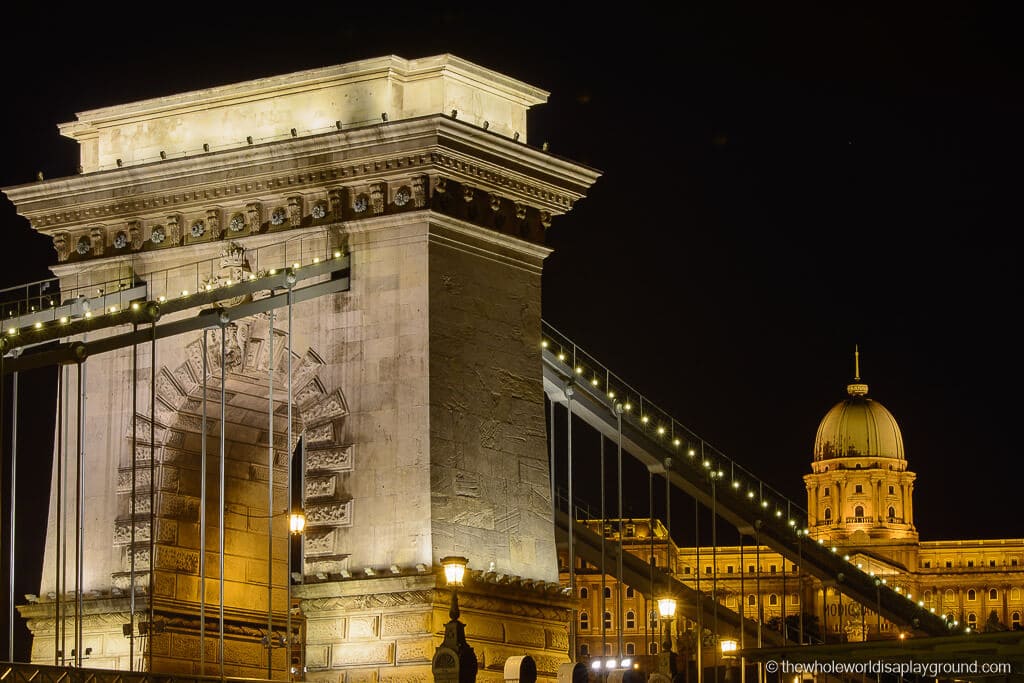 3 | View of Buda side from Pest

The historical sites of Buda can be captured beautifully from the Pest side of the river. For the best views over the Danube we loved our stay at the Budapest Marriott Hotel with its unbeatable views of Buda from the hotel’s concierge lounge on the top floor.  There are also some great rooftop bars along the river where you can get a good vantage point for a photo. 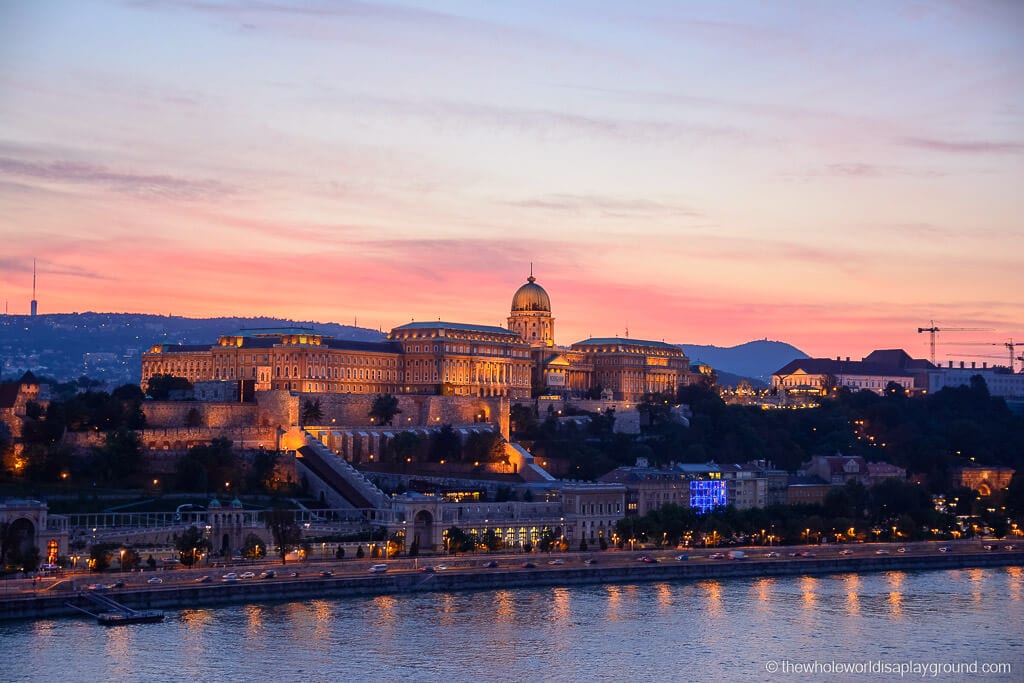 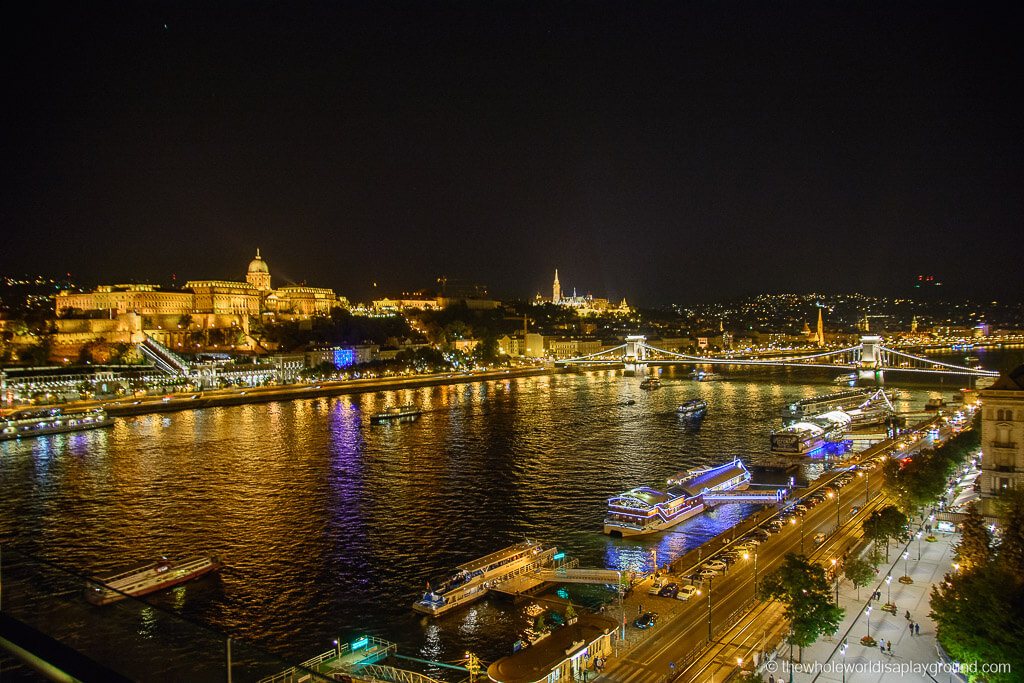 Budapest has loads of great hotel options in the city centre, perfect for the early and late photo walks necessary to capture the city at its finest. We’ve stayed in a number of hotels throughout the city and recommend the following.

Named after the first King of Hungary, St Stephen’s Basilica is a beautiful church in the heart of the city. It houses the most sacred relic in Hungarian Catholicism, the mummified right hand of King Stephen. There are excellent photo opportunities both in the church and from its roof: on a clear day the panoramic views of Budapest from the cupola are immense! 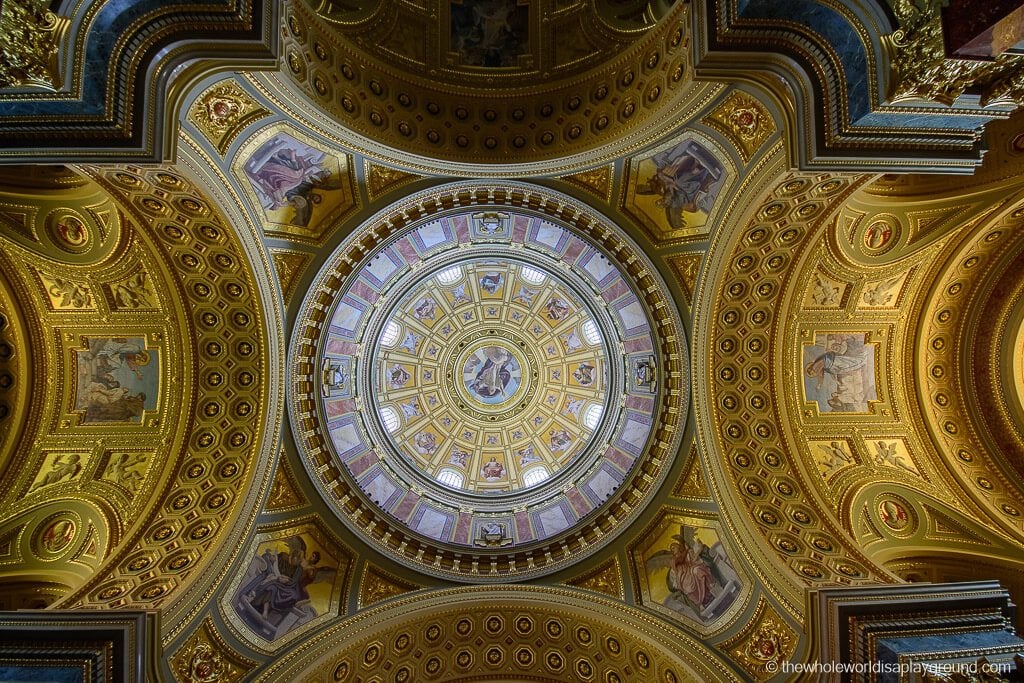 The ceiling of the Bascilica 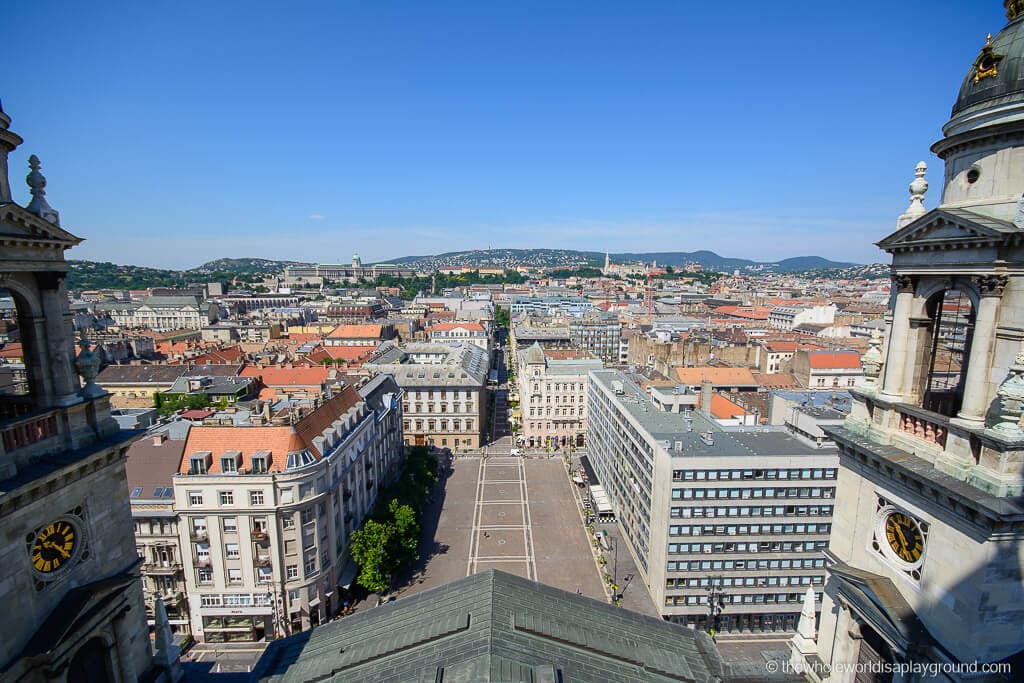 Panoramic views from the cupola

For the best panoramic view of Budapest get a taxi to the top of Gellért Hill on the Buda side of the city. Perched high above the Danube Gellert Hill is home to a Citadel and Liberty Statue. The Liberty, or Freedom, Statue commemorates those who died for the independence of Hungary and is one of the most impressive memorials we’ve seen.

The views across Budapest are unparalleled and it’s a great location for some panoramic shots of Budapest. 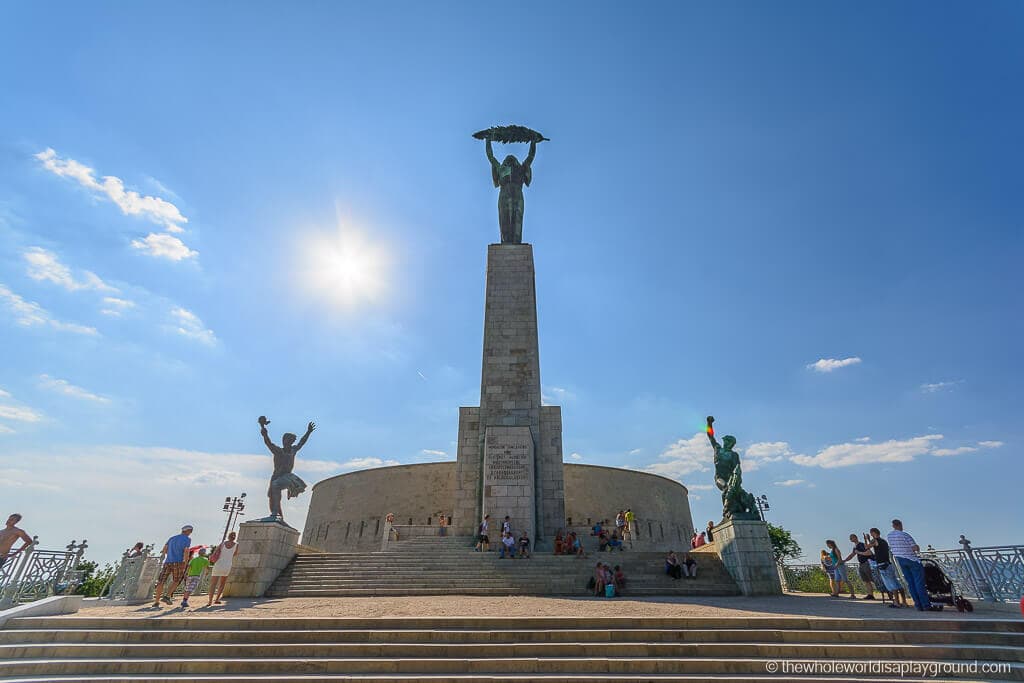 The Liberty Statue on the Gellert Hill 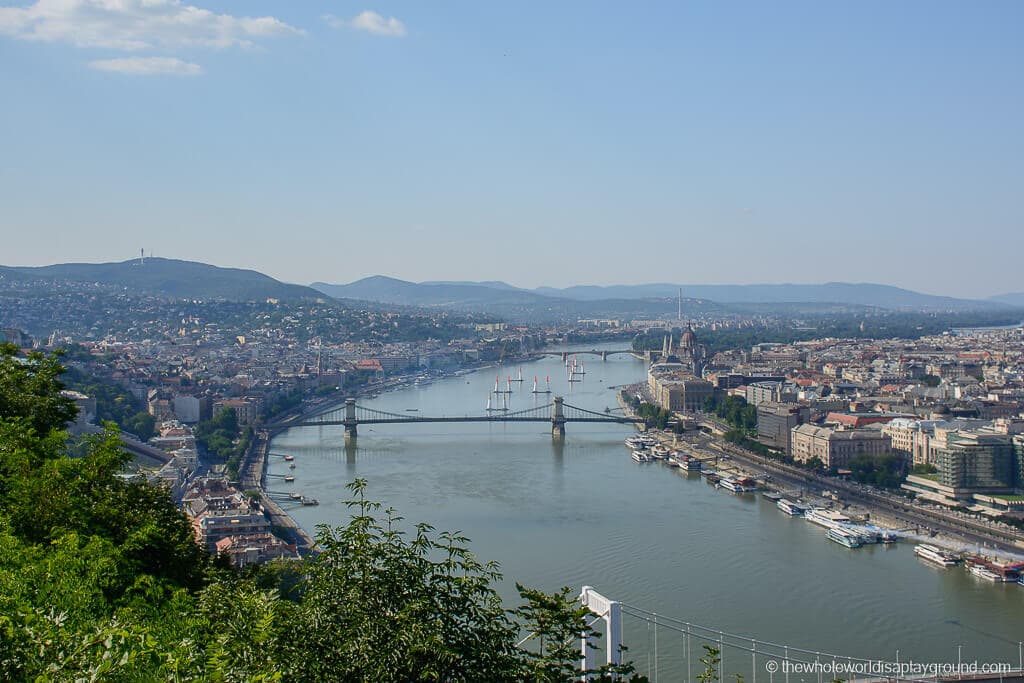 Panoramic views of the city 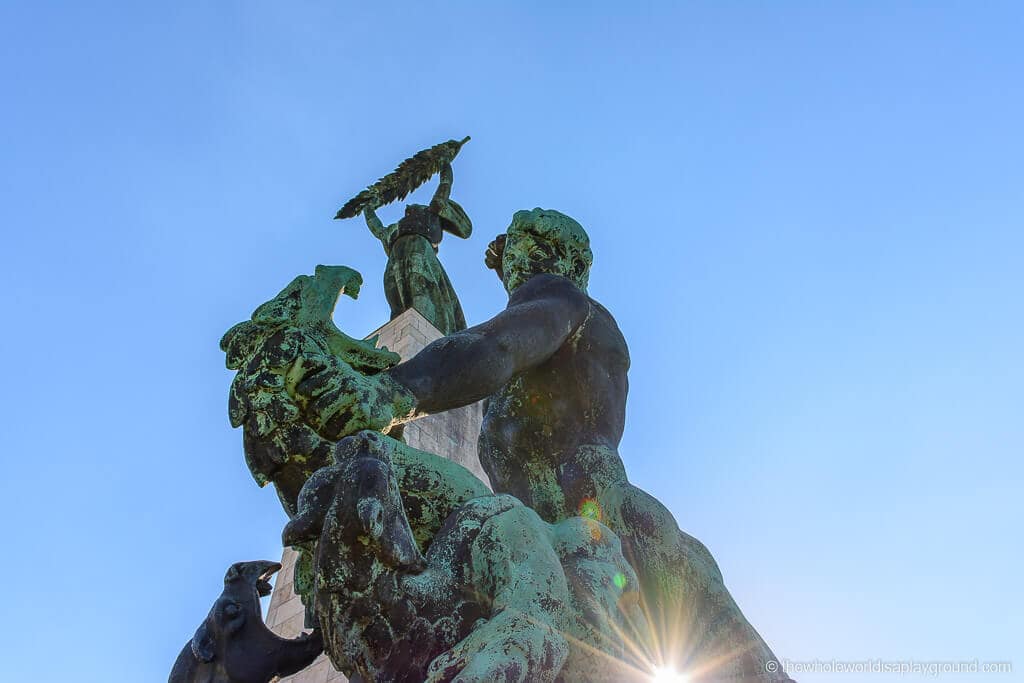 A close up of the monument

Budapest is famous for its ruin bars: the run down kitschy bars in abandoned buildings that are dotted throughout the city. Szimpla Kert is one its finest ruin bars and the quirky decor has to be seen and captured! The sheer quantity of cool and quirky stuff here can keep you occupied for hours and there are lots of photo opportunities while you enjoy a few beers.

Budapest photography tip: If you’re planning to photograph this famous ruin bar try to visit during the afternoon when it’s least crowded. 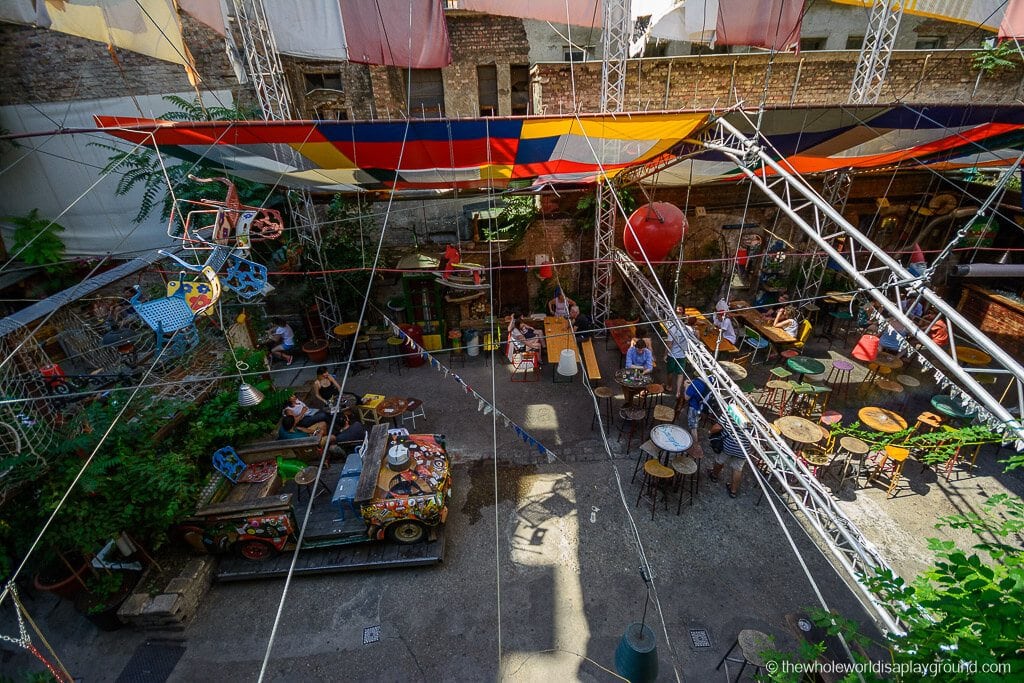 The quirky and colourful courtyard of Szimpla Kert

The tallest and largest building in Budapest, the Century old Hungarian Parliament building is simply stunning to photograph. One of the best locations to capture it is from the banks of the river on the Buda side, where you can get the this huge symmetrical building in frame.

Budapest photography tip: the inside of Parliament building is just as beautiful as the outside but can only be visited by guided tour. 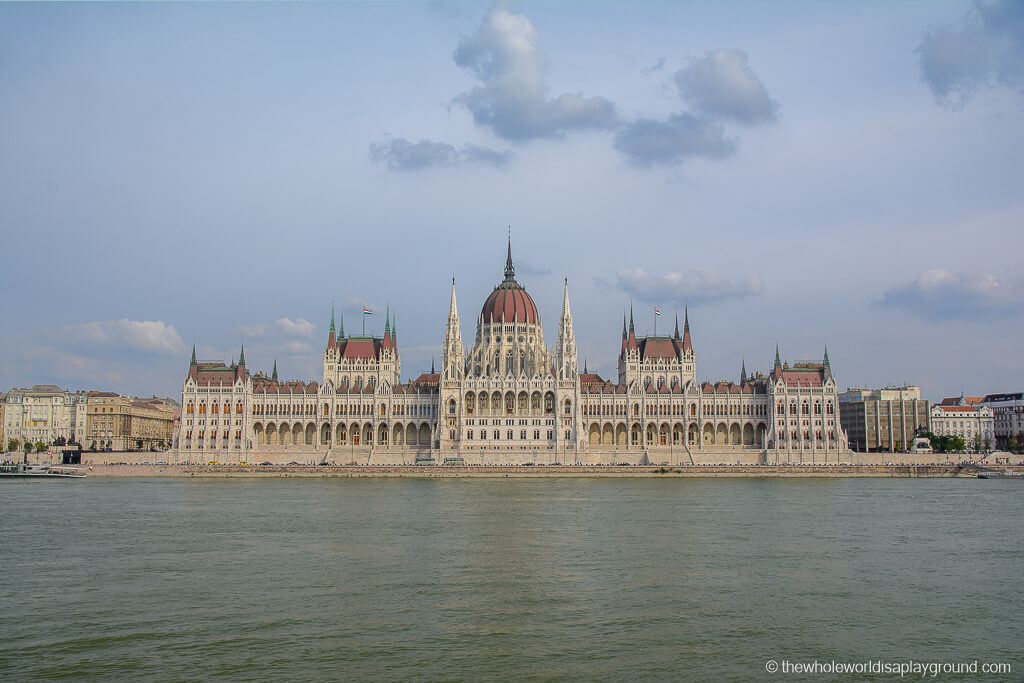 Parliament Building from across the river 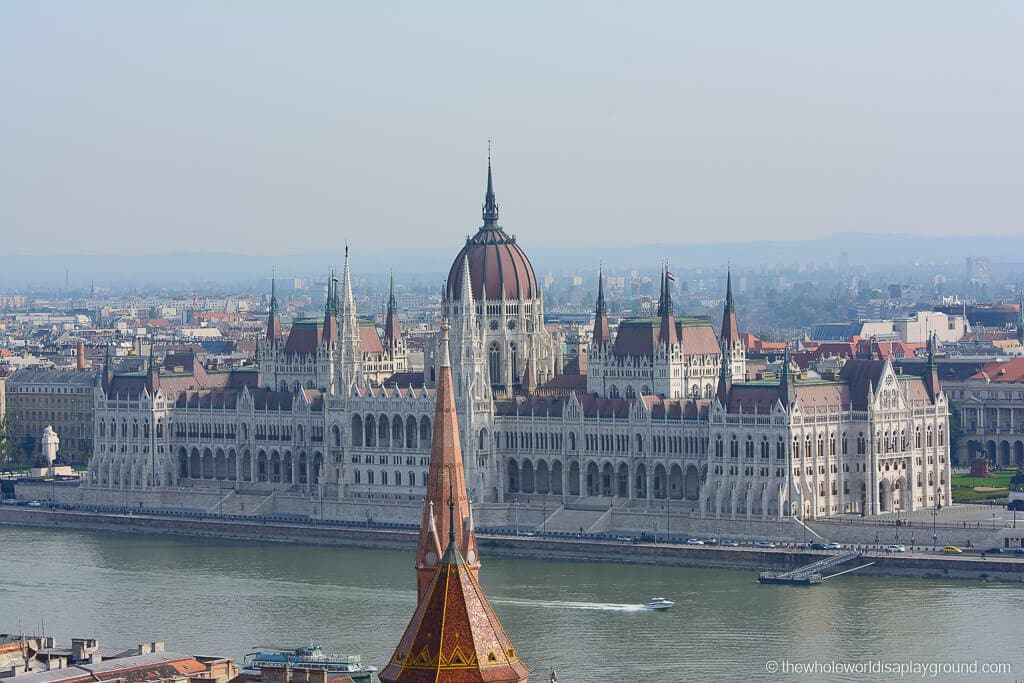 A poignant memorial to the souls who, during the second world war, were lined up along the Danube and shot. The victims were asked to remove their shoes before being shot so their bodies would be swept away when they fell in to the Danube. This haunting memorial represents the shoes they left behind and it’s one of the most iconic images of Budapest’s troubled history. 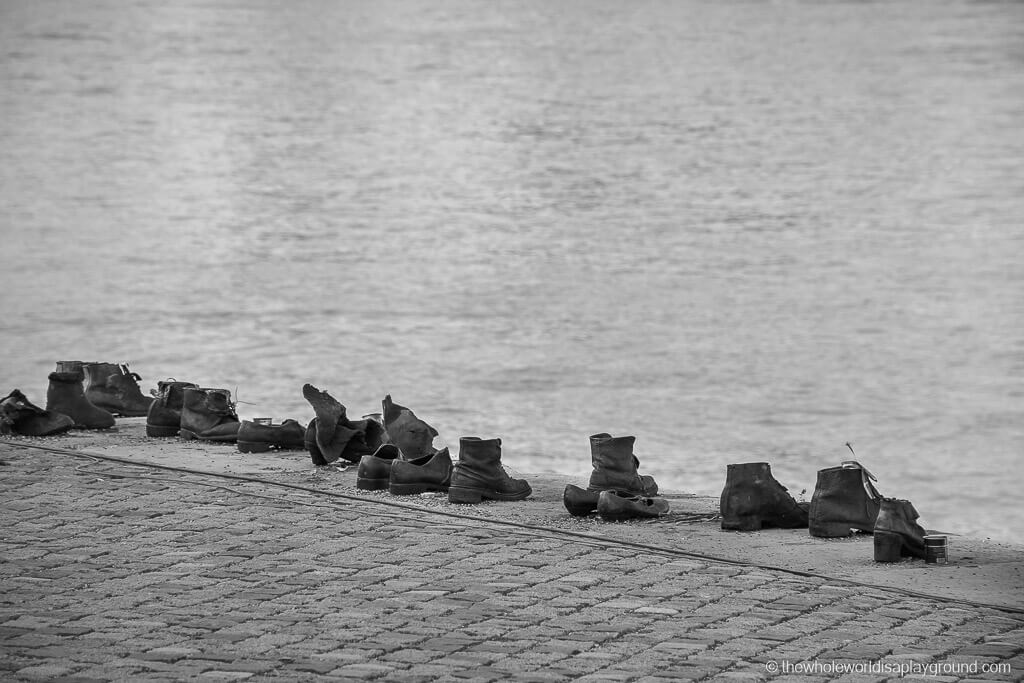 Shoes on the Danube

Momento Park is an open air museum which houses statues and monuments from Hungary’s communist period and is an unmissable sight in Budapest. The photo opportunities are amazing and it’s hard to appreciate sheer scale of the monuments until you’re standing beside them. One of the best photo opportunities is of the Republic of Councils Monument, based on a famous 1919 revolutionary poster, known locally as the cloakroom attendant.

Budapest photography tip: As the park is a little outside the city we rented scooters and rode out to the park from the city centre. There are also buses from the city which service the park. 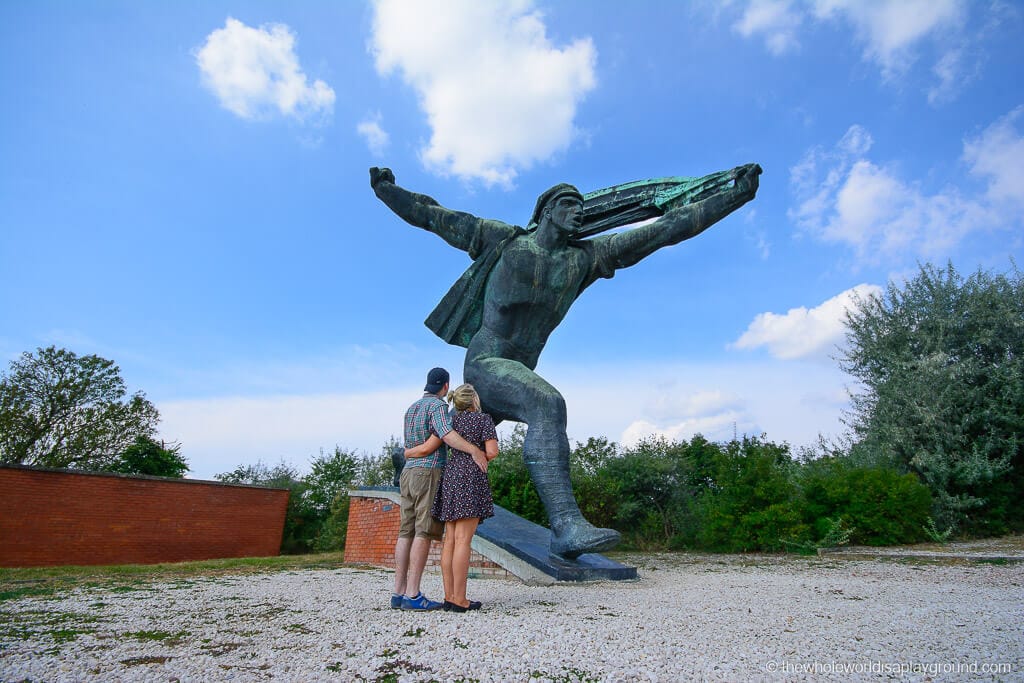 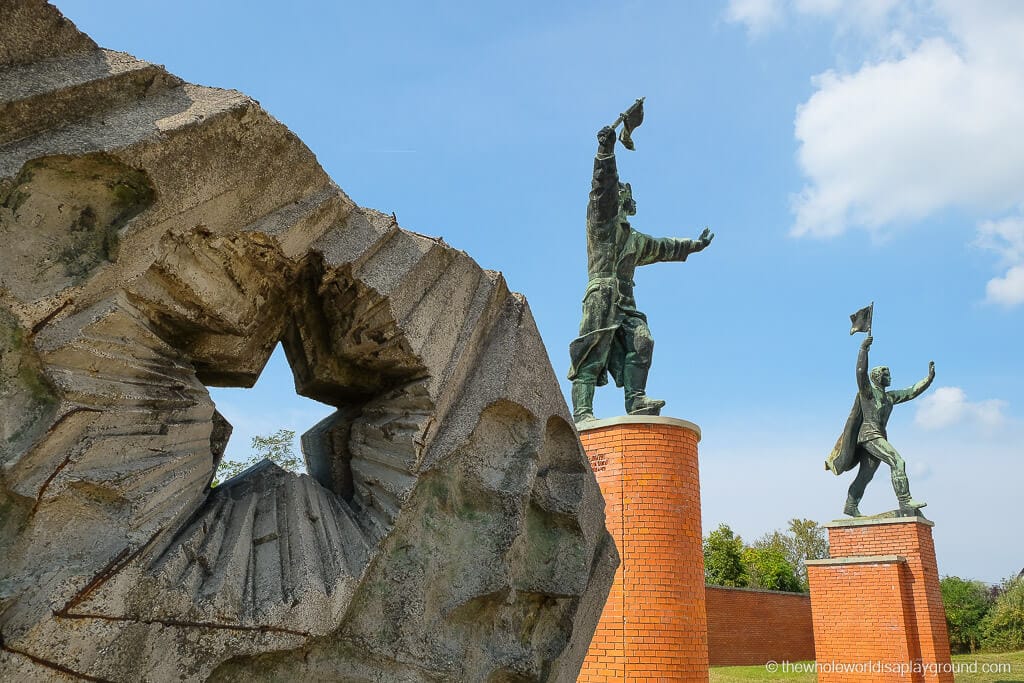 Known as the most beautiful café in the world, the New York Cafe certainly lives up to its reputation. The Italian Renaissance decor makes it feel like dining in the Sistine Chapel! The décor alone makes it worth the trip for photos!

Budapest sightseeing tip: we stayed at the Boscolo Marriott Hotel which adjoins the New York Café and our rate included breakfast in the café but everyone can pop in for food and drinks. 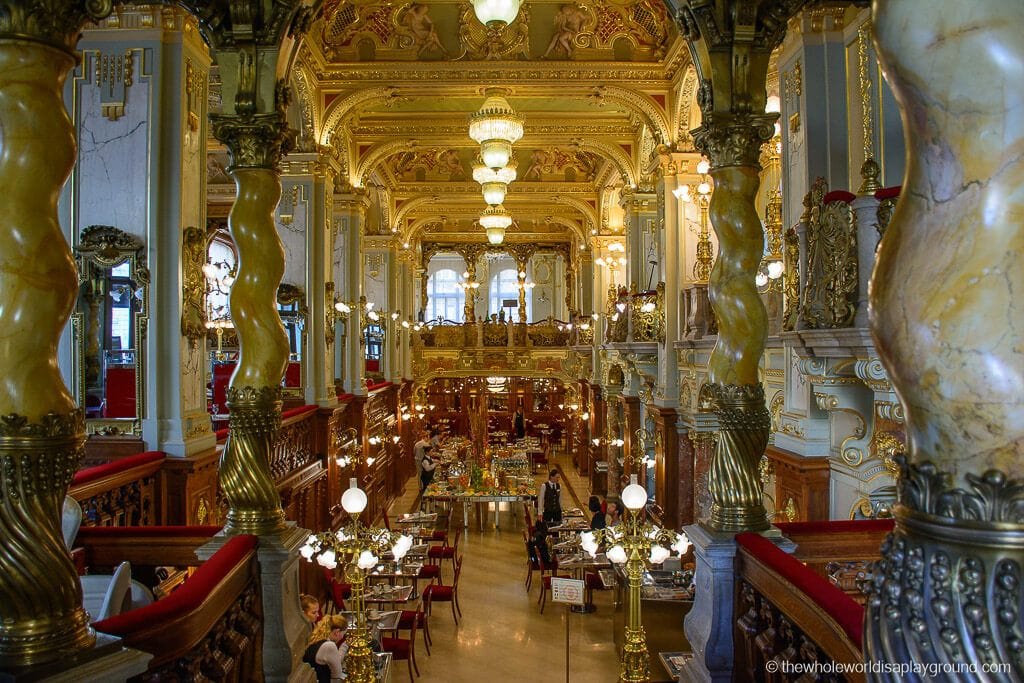 One of the biggest squares in Hungary, Heroes square is a fantastic photo location in Budapest. Archangel Gabriel stands on top of the Millennium Memorial, a monument in the centre of the square which commemorates the 1,000 year history of the Magyar, a Hungarian ethnic tribe. 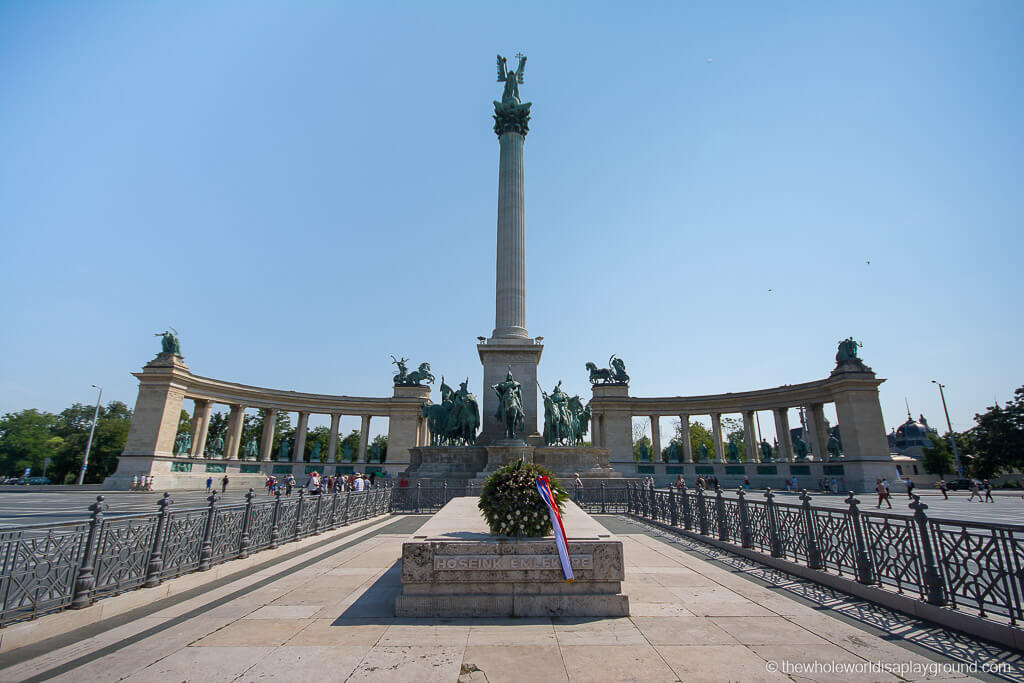 A thermal bath may seem like a strange photo location but the Széchenyi Thermal Baths is a colourful location with amazing architecture. It’s also the perfect spot to capture some great street style photography when the older men play chess in the pool over a few beers in the morning. As a bonus you’ll get to enjoy a relaxing soak in the thermal baths yourself. You can rent secure lockers for your gear while you visit the baths for a swim and cameras are allowed in the outdoor areas.

Another quirky ruin bar which is a joy to photograph. Almost every inch of its surface is crammed with drawings and notes that customers have pinned to the walls and ceilings. The beer is awesome as well! 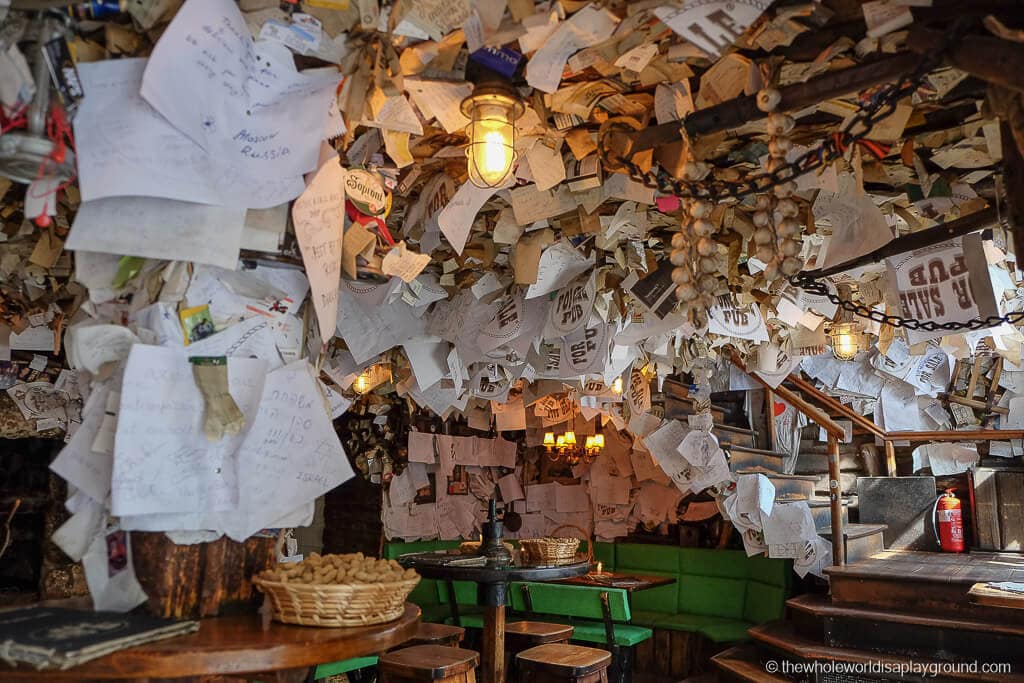 This huge indoor market is a great location for some more incredible architecture, street photography opportunities and indulging in some delicious breakfast or lunch! From the first floor you can get great angles of the entire building. The food here is incredible too, just make your way up the stairs to the first floor where the food stalls line the sides of the market 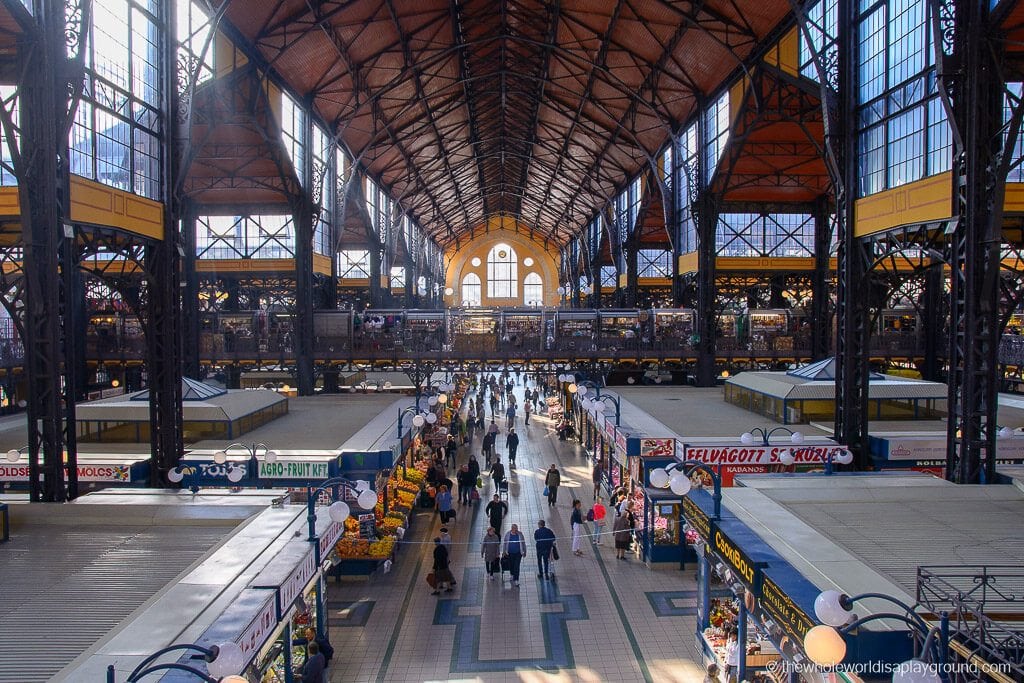 Another popular Budapest thermal bath is the Rudas Baths which are located just across the river from the Central Market. While no photography is allowed in the beautiful 16th Century octagonal bath in the old wing make your way to the roof for one of the most photogenic hot tubs we’ve ever seen! The hot tub on the roof has panoramic views across the Danube and the Budapest skyline. It’s one of our favourite photo spots in Budapest! 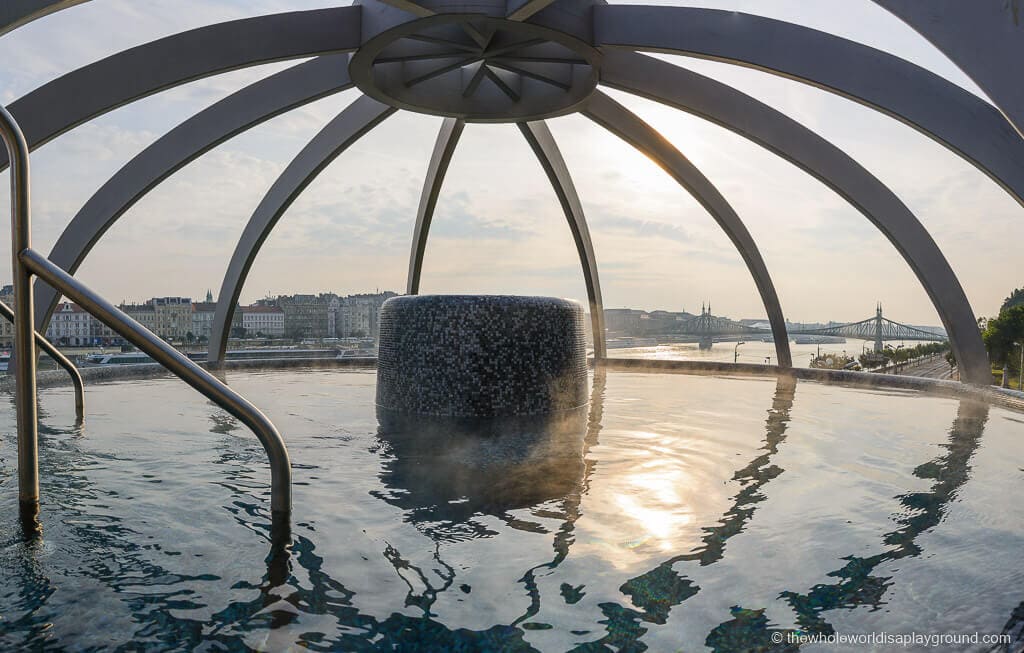 The rooftop at Rudas