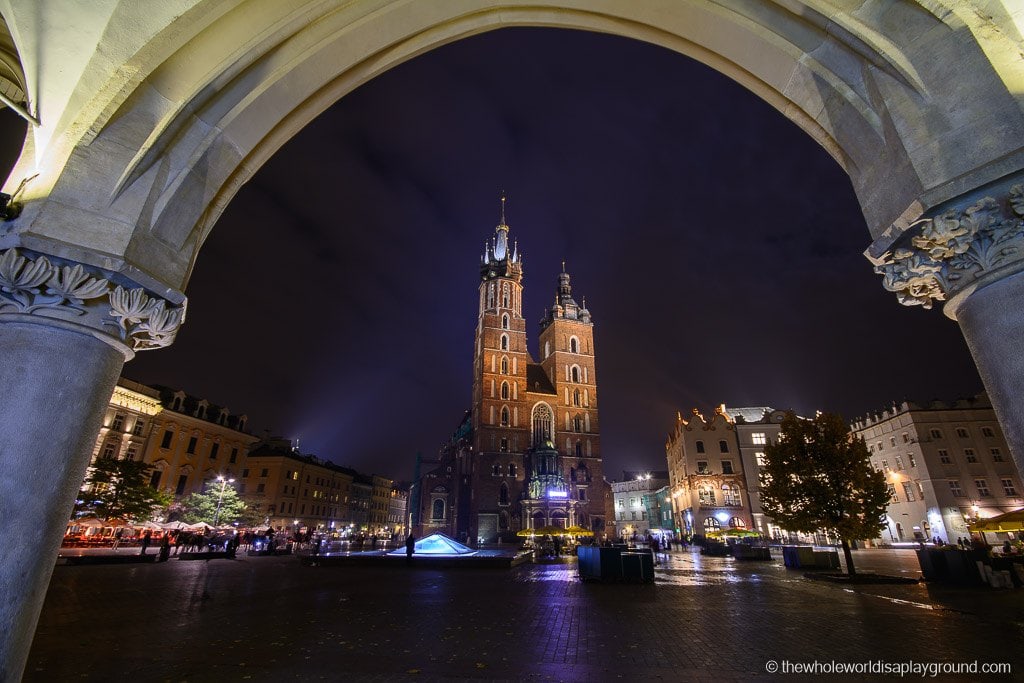 Historic, beautiful and fun Krakow is an Eastern European gem and each district of the vibrant city is unique and enticing and there are lots of things to do in Krakow. The former royal capital of Poland is full to the brim with museums, restaurants, bars, beautiful architecture and lively squares. Its reputation as inexpensive is justified as is its party town tag but beneath all that lies the heart of a bustling city built around Europe’s largest market square. Here’s our guide to the best things to do in Krakow with the best sights and experiences and its quirky hidden gems perfect for a weekend stop or a longer stay in the city. Enjoy!

Krakow’s main market square, Rynek Glowny, is the largest in Europe and is a focal point for any visit to the city. Set in a beautiful backdrop of historic buildings and churches the medieval Cloth Hall and the spires of St Mary’s Basilica dominate the square. It’s the perfect spot for grabbing a beer and indulging in some people watching and beautiful building admiration! 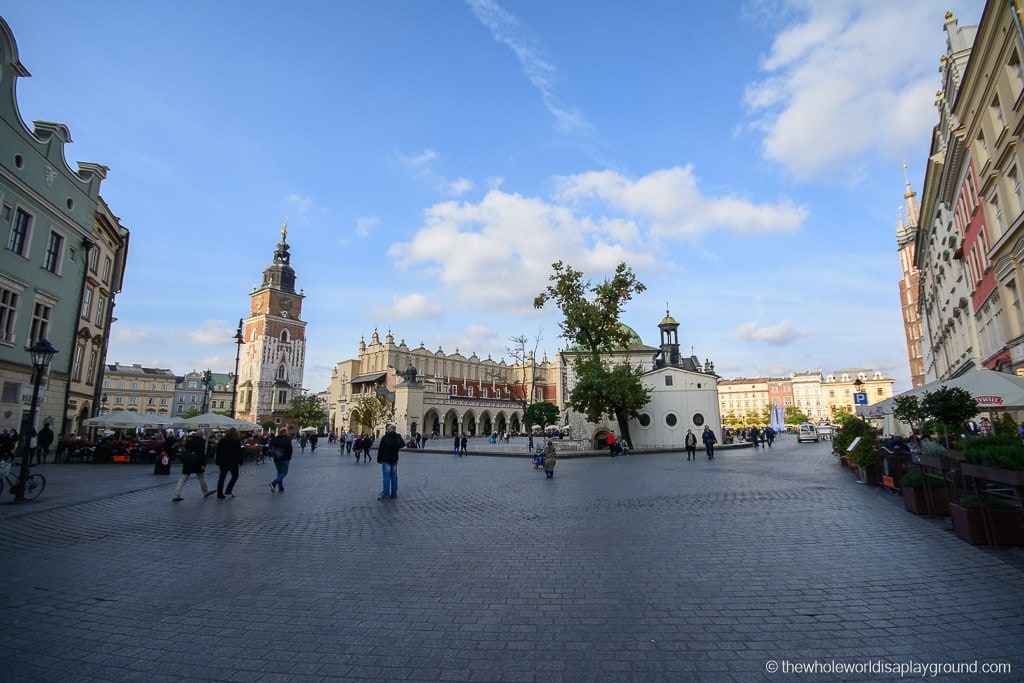 The 13th Century Gothic Clock Tower is a Market Square landmark and all that remains of the city’s Town Hall. It’s possible to climb to the top floor of the tower where the observation deck has great views of Wawel Castle and St Mary’s Basilica. 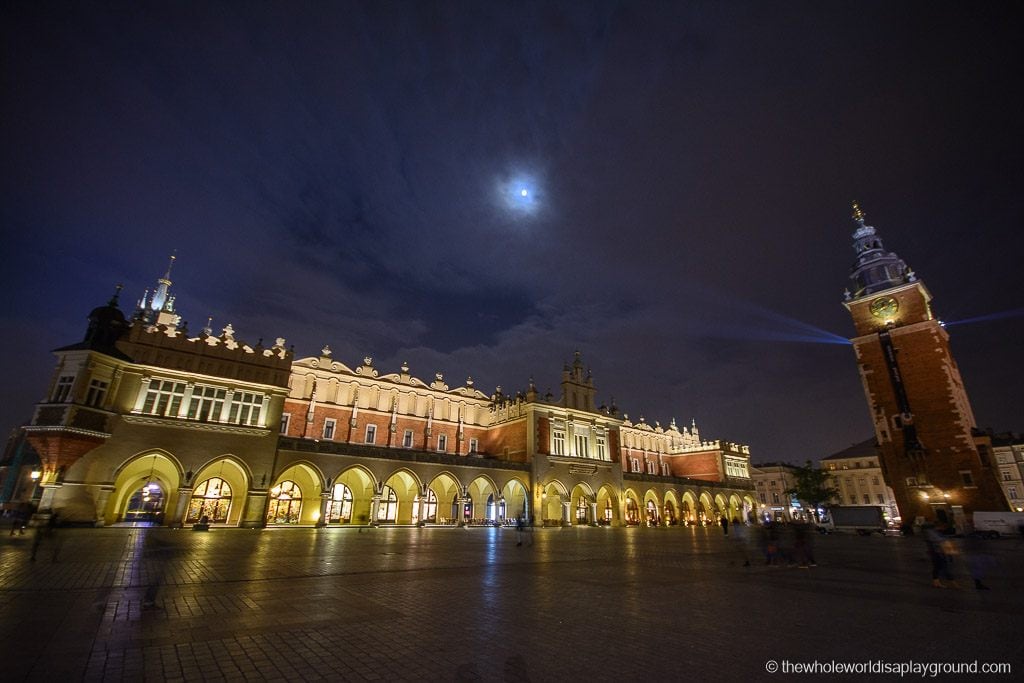 3 | St Mary’s Basilica, the Church of the Virgin Mary

Another Market Square gem, the unequal towers of St Mary’s Basilica dominate the surrounding area. The Church is as beautiful on the inside as it is the outside with its stunning stained glass windows, the carved wooden altar and stunning decorative porcelain.

Krakow sightseeing tip: try and catch the trumpet signal which is played on the hour at certain times of the day. The music cuts of mid tune to commemorate the trumpeter who was shot in the throat while sounding the alarm before a 13th Century raid on the city. 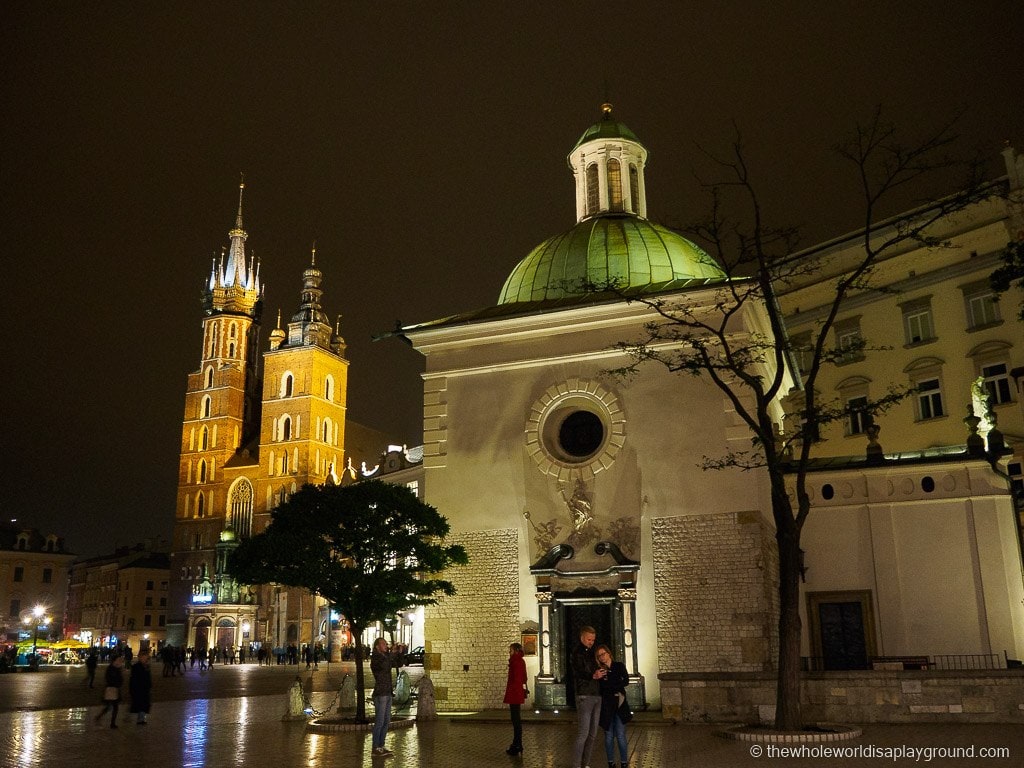 At the center of Market Square, the Cloth Hall is an iconic Krakow building and was once the hub of trading in the city. It now houses a selection of market stalls selling local souvenirs and trinkets.

One of the oldest and most well known churches in Krakow the Basilica of St Francis is also its most colourful. The stained glass window is exquisite and a visit to the church on a sunny day is rewarded with a rainbow of colours shining through.

The impressive statues of the 12 Apostles lining its entrance draw the crowds into the Church of Saint Peter and Saint Paul and, while the interior is worth a look, the real treat is in the classical concerts that the Church hosts.

Krakow sightseeing tip: The acoustics are stunning inside the Church and it hosts fantastic classical concerts. Try to attend one! 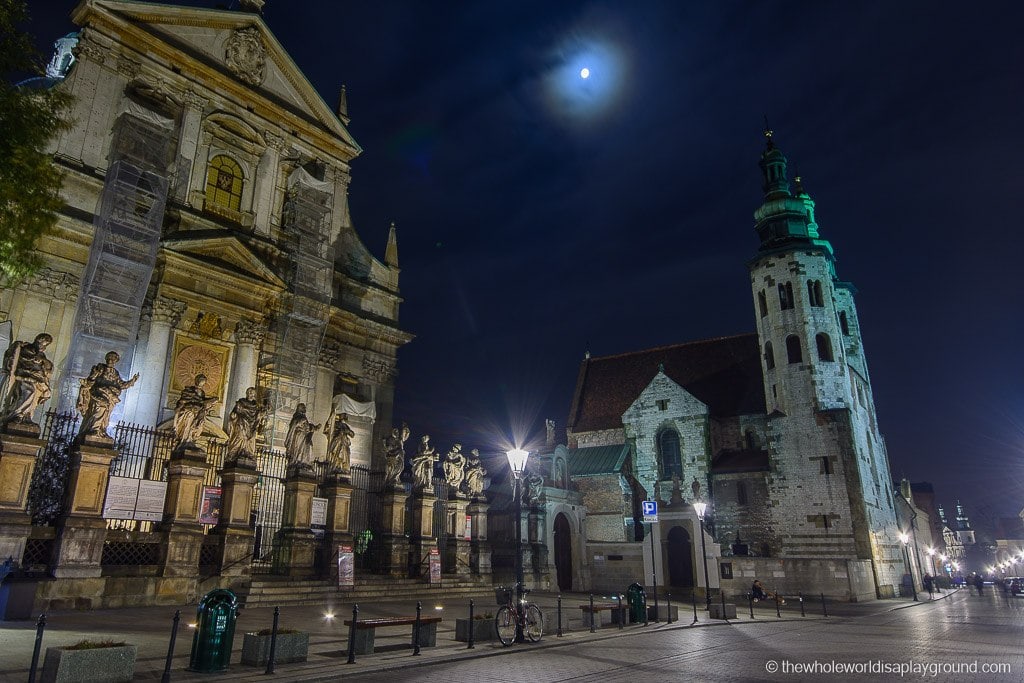 Perched on the top of Wawel Hill both the castle and the hill represent the most historically important site in Poland having once housed the reigning Kings of Poland. It’s possible to visit the Castle and the adjacent cathedral and the hilltop location boasts some lovely views of Krakow. The Castle is now an art museum and hosts the most expensive painting in the city, Da Vinci’s ‘The Lady with an Ermine’.

Krakow sightseeing tip: a limited number of tickets are sold each day meaning tickets can sell out. Arrive early if you want to secure tickets to all the exhibitions and note that a separate ticket is required for each. 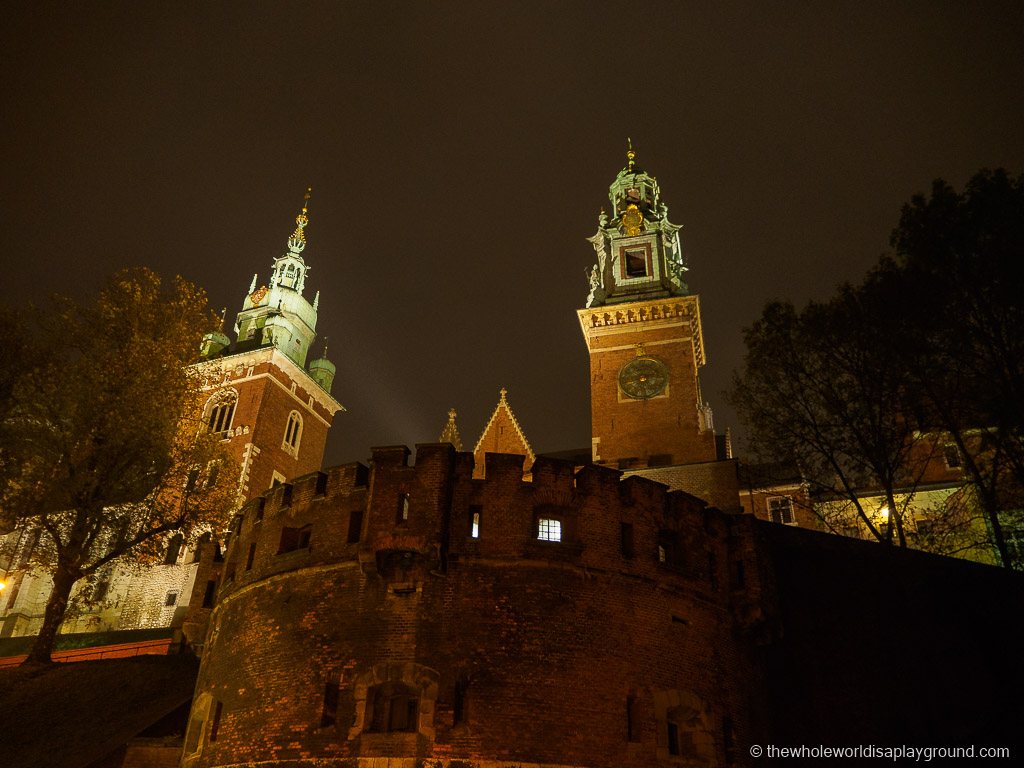 Our favourite statue in Krakow, the Dragon of Wawel Hill is dedicated to the mythical Wawel Dragon who, as legend has it, once lived in a cave at the foot of the hill and who is purported to be the owner of the bones hanging outside Wawel Cathedral!

Krakow sightseeing tip: make sure to hang around long enough for the dragon to breathe some fire! If you’re short on time send him a text message and he’ll breathe some on demand! 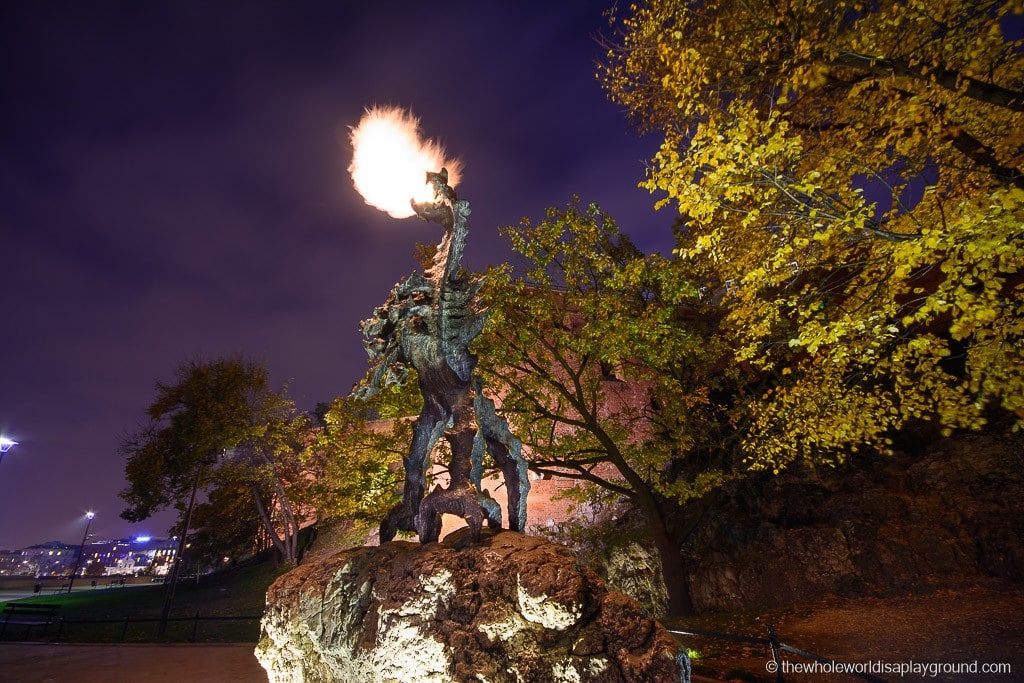 Medieval Krakow was once surrounded by two mile long city walls, 39 towers and 8 gates until the 19th Century when most of it was torn down.  A historic gateway leading into the Old Town of Krakow, the Barbican is one of the few remaining relics of this time and St Florian’s Gate, a Gothic style tower is another incredible survivor from the era.

Kazimierz is one of Krakow’s hippest neighbourhoods and is home to cosy cafes, quirky galleries, Gothic churches and synagogues.

Krakow sightseeing tip: venture a little further to Ghetto Heroes Square and its memorial of 33 empty chairs. The chairs are symbolic of the tragic fate of Krakow’s Jewish inhabitants who were imprisoned in the Krakow Ghetto during World War II and were subsequently murdered. 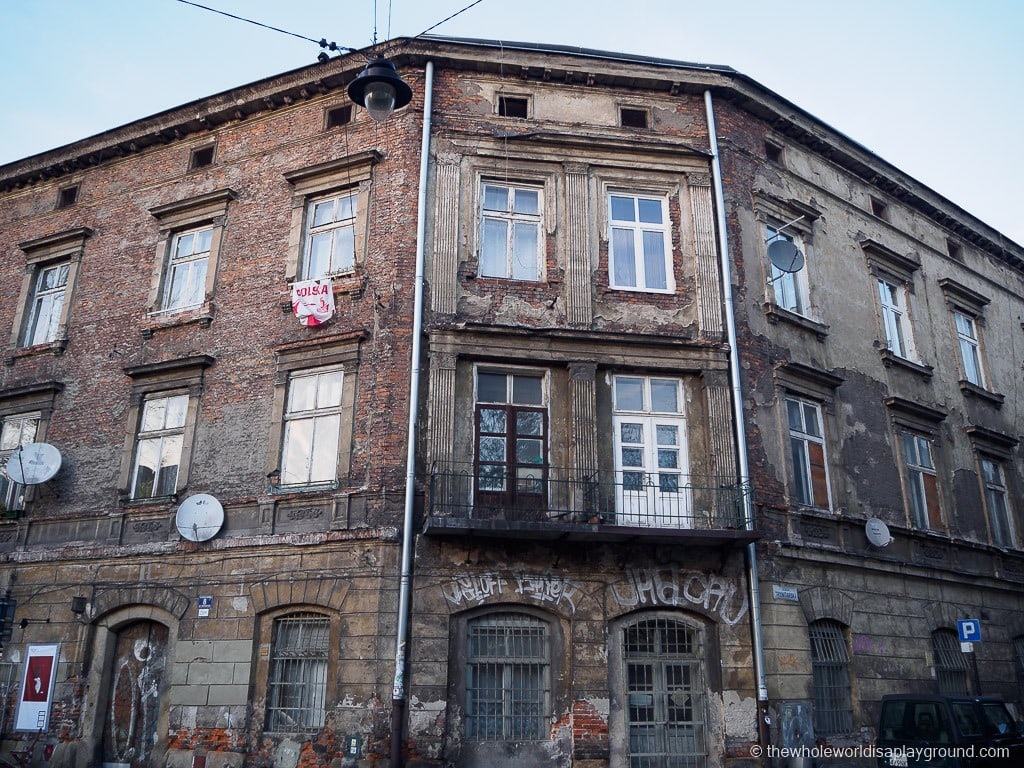 Krakow was the location of Oskar Schindler’s enameled vessels factory, a man who heroically saved the lives of a number of members of his Jewish staff during the Holocaust. Immortalized in Schindler’s List, the factory has been transformed into a museum documenting Krakow’s experiences and the fate of its residents and factory staff during World War II. 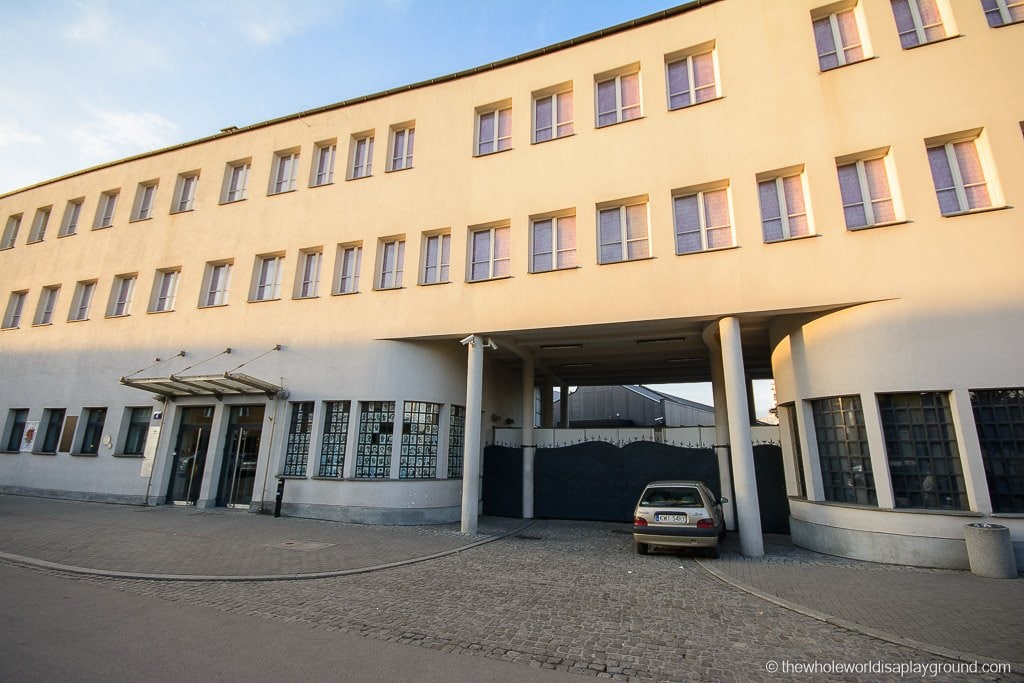 Love ’em or hate ’em love lock bridges feature in most cities across Europe! In Krakow lovers flock to the Bernatka Bridge to attach a padlock as a symbol of their relationship as they stroll hand in hand through the city. 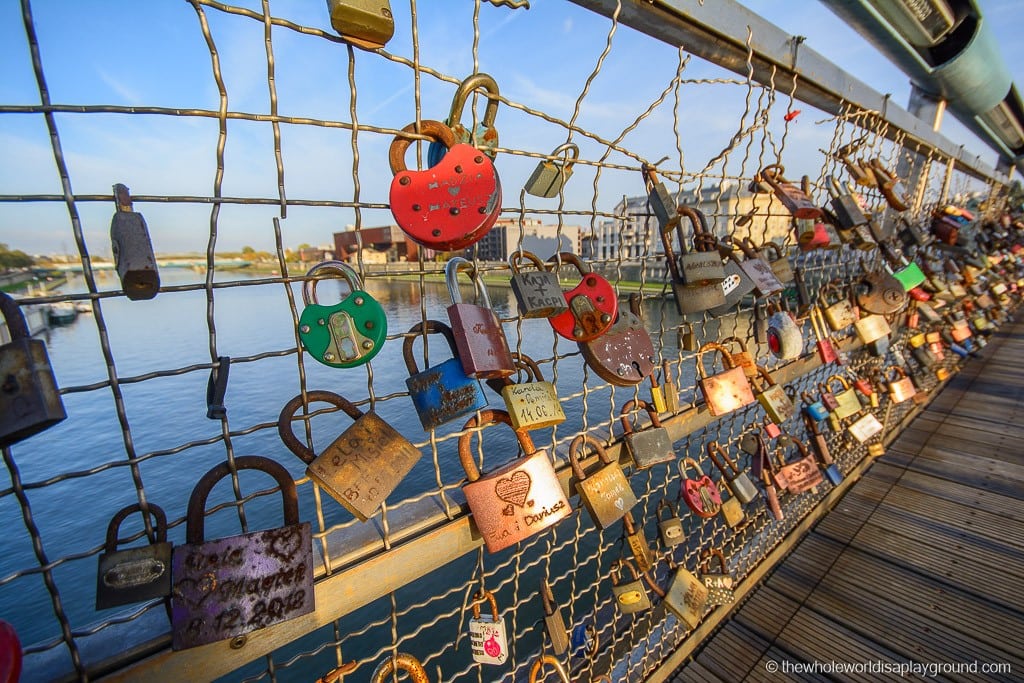 We don’t want to give too much away but if you want to experience 15 minutes of terror in Krakow then book a spot at Lost Souls Alley. The set up is a mix between a haunted house and an escape room and it is guaranteed to make you heart beat our of your chest!

Krakow is host to some beautiful sunsets and the Vistual River is the perfect vantage point from which to appreciate them. 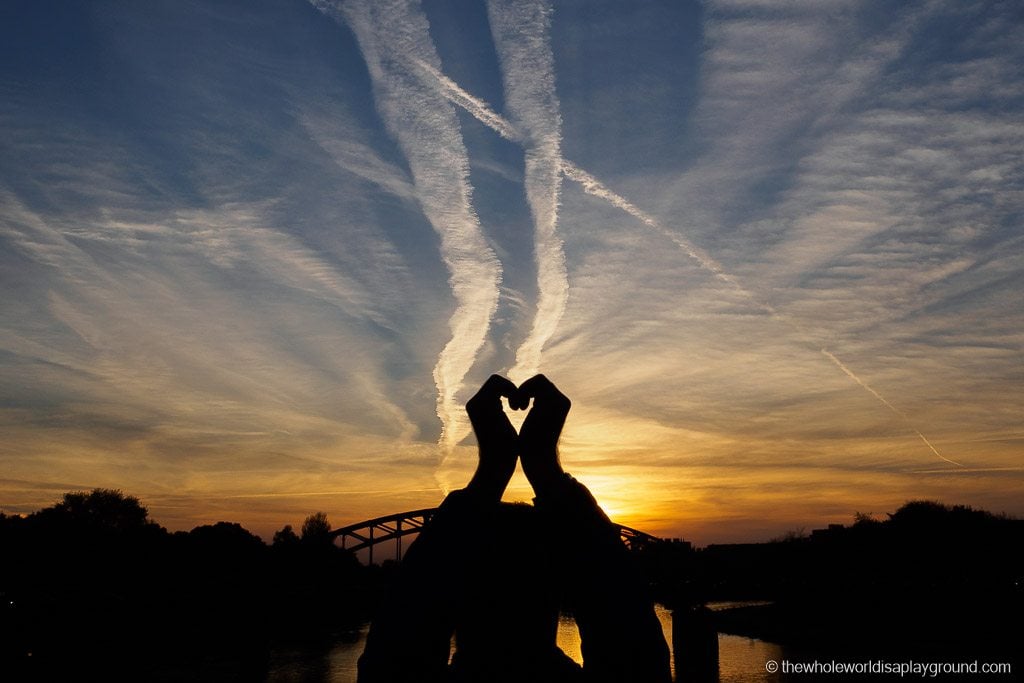 Krakow has an amazing dining scene: from kebabs to the pizza like Zapiekanka to the incredible Maczanka pork sandwich we can only recommend eating it all!

The Auschwitz-Birkenau concentration camp, where over 1.1million lost their lives, is located close to Krakow and a visit is both sombre and difficult but entirely worthwhile. Our hearts were well and truly broken as we learned the terror and death that happened within its confines. This explains how to get to Auschwitz from Krakow.

The  Wieliczka and Bochnia Royal Salt Mines, a labyrinth of passages and caverns with salt sculptures, are about 15 minutes outside the city and the Chapel, sculpted by two miners during their spare time, is the absolute highlight of a visit.

Another great option is Ksiaz Castle close to Wałbrzych where the tunnels were reportedly hiding the Polish Gold Train as well as these Krakow experiences.

Where we stayed in Krakow

We opted for the Senacki hotel on the edge of the Old Town and we were very pleased with our choice. The hotel had a boutique feel and our room, looking over the Church of Saint Peter and Saint Paul, was a real treat. The Old Town is a perfect location for accommodation and we were able to walk everywhere in town.

2 thoughts on “Best things to do in Krakow, Poland”