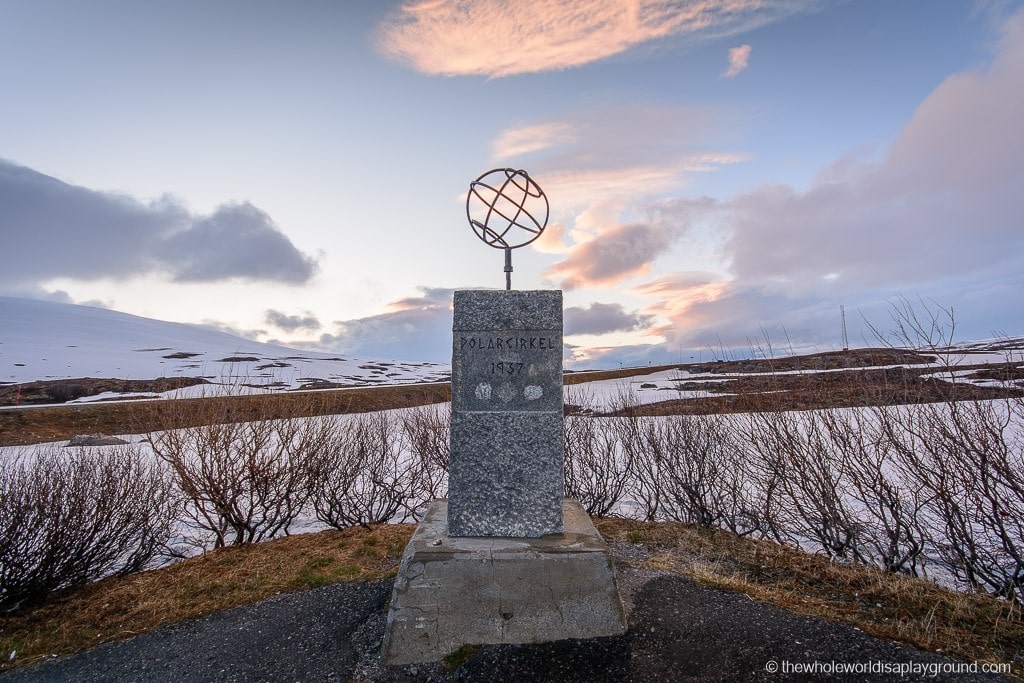 Driving to the Arctic circle in Norway. It sounded crazy, the distances were crazy and the timings were crazy but then, we’re crazy when it comes to our travel bucketlist! 24 hour brightness and the chance to stand in the Arctic were too great a temptation and, before we knew it, a visit to the Arctic Circle was penciled into our Norway route. As we started our road trip, which took us from Oslo, through the Fjordlands and onto Bud, it became apparent that distances in Norway should be measured not in kilometres but in units of full day drives! By the time we arrived in Bud, a town close to the Atlantic Road on Norway’s north west coast, our Arctic Circle dream had been put to bed and replaced with a relaxing 3 day drive back to Oslo taking in all the sights along the way.

Of course that didn’t turn out to be the case!

As we awoke to another stunning Norwegian sunrise in our cosy little Bud cabin Elaine planted the seed of possibility. ‘You know Dave we could totally make it to the Arctic circle tonight if we really wanted to’. You guessed it, we wanted to!! We were unaware setting out from Bud that morning that two days of the most exciting, white-knuckle, exhausting drives but ultimately one of the most unforgettable trips of our lives lay ahead of us. We experienced so many amazing moments in the 48 hours following our spur of the moment decision: beautiful countryside, a surreal encounter with a wild elk, a stay in one of Norway’s most beautiful cabins, copious amounts of coffee, a quick 12 hour detour to the UNESCO inscribed Vega Islands and of course….standing at the Arctic Circle itself.

Planning our drive to the Arctic Circle

A quick search revealed that the Arctic Circle Centre, located in the Saltfjellet mountains just inside the Arctic Circle itself, was almost 800km from our cabin in Bud. Our GPS was predicting a 14 hour drive including some sightseeing stops. The plan was to take shifts of driving, swapping when the other got tired and repeating this system until we made it to the Arctic Circle. In hindsight it was a crazy, spur of the moment decision but let’s face it: they’re always the best kind. This one most definitely led to an amazing adventure!

Renting a Car in Norway

Renting a car in Norway is the best way to explore the country. Driving conditions are really good with extremely good quality roads throughout the entire country. Having your own car gives you the flexibility to travel at your own pace through the Fjord lands and see places that are simply not possible on group tours or public transport.

We had spent the previous evening exploring the Atlantic Road and we loved it so much we returned that morning to catch one last glimpse before setting off for the Arctic! It’s easy to see why the Atlantic Road is known as the world’s most beautiful roads: for 8.3 kilometres it snakes up and around an archipelago of islands from Bud to Kristiansund. It was amazing to feel the power of the ocean as it relentlessly pounded and the wind howled around the small islands and structures supporting the Atlantic Road itself. It’s worth setting aside a few hours to marvel at this amazing structure which was voted Norway’s engineering feat of the century!

Our route took us from Bud in the Northern Fjordland region of Norway, across the magnificent Atlantic Road, through Trondheim and then up the long and winding road north to the Arctic Circle.

A Fly By: Trondheim!

By late morning we reached the outskirts of Trondheim and stopped for some snacks and a quick power nap. Due to the mammoth drive ahead of us we didn’t have time to take in the Trondheim sights and vowed to return. Once we were east of Trondheim it was a simple left turn and then north up towards the Arctic circle! We now faced the exciting 600 km trip north.

Leaving Trondheim in our rear-view we started to wonder what the next few hours held in store. The scenery was lush and green and just north of Trondheim we entered Nordland, the county separating southern Norway from Troms in the north.

Advancing north we both assumed that the countryside would become less inhabited and increasingly barren but it turned out to be the opposite. The scenery did change but it was for the better and we passed many picturesque villages and houses as we cruised on northwards. The highlight of the drive was the road itself.

Although it is the main road to Northern Norway, the E6 snakes north slowly, twisting and turning to the contours of the rugged, yet immensely beautiful countryside. Cutting through the middle of Nordland, the road runs the length of Norway and we were on this road for the majority of our final 3 days in Norway!

The E6 was entirely unforgiving as it continued to throw countless bends at us. There was very little other traffic on the road and there were periods when we didn’t meet another vehicle for over an hour or so. Like so many places in Norway, at times we hit patches of pure wilderness and there was nothing for miles and miles but us, the open road and the beautiful surroundings.

The relentless twists of the road meant we had to take frequent breaks to rest and snack but we continued on for the afternoon. We were aiming to reach the town of Mo I Rana, just south of the Arctic circle, by early evening and arrange a cabin for the night. From there we planned to drive towards the Arctic circle itself early the next morning.

After a caffeine fuelled 14 hour drive from Bud to Mo I Rana we finally reached our campsite at around 9 pm that evening. Having left Bud at 7 am to describe it as a long day was an understatement! Although tired and weary, once we discovered the gorgeous Ranfjorden views from our cabin balcony we completely forgot about the long drive earlier. A warm bed, hot water and a balcony affording us panoramic views across the fjord and we were all set for the evening!

As we sat down to relax and chat about the day’s events I leaned over to Elaine and jokingly told her of my conversation with the campsite owner. ‘You know the Arctic circle is only 90 minutes from here….we could definitely go tonight’ The stunning fjord views must have given us a renewed energy as, despite the long day and feeling depleted just minutes earlier, we grabbed some snacks and jumped in the car with one goal in mind. A final destination of the Arctic Circle!

We knew that we would reach the Arctic Circle after midnight. The cabin owner had told us that, although there would be no mid-night sun due the time of year the entire drive would still be bathed in a long sunset. The drive from Mo I Rana to the Arctic Circle was a trip we’ll never forget. As we passed the many reindeer farms the landscape started to change drastically. The surroundings became more barren with the countryside becoming noticeably less green.

At this point we were running on pure adrenaline and we were relived when we emerged from the ravine road out into the Arctic wilderness and were met with our first Arctic Circle sign: we were 2 kilometres from the Arctic Circle!

We finally arrived at the Arctic Circle and hopped out of the car into the freezing midnight temperatures to explore! Obviously at that late hour the centre was closed but we were happy to run around by ourselves and enjoy with the stunning views while high fiving at the success of our epic road trip!

We explored the area around the centre in the crisp midnight air and were amazed at how bright it still was. A line of rock pillars stretched into the horizon on either side marking the invisible Arctic Circle line of latitude. The only noise was the occasional passing car and the chirping of birds as they played in the eternal sunset.

We could have spent hours at the Arctic Circle simply staring at the sky with its rich and never ending sunset however by 1am we both knew that we needed to leave and get some sleep!

Like all return journeys the trip back to our cabin in Mo I Rana felt so much quicker. By the time we reached the cabin we barely had the energy to sit with a well earned beer, marvel again at the stunning fjord views and chat about our amazing day. It was truly one we’ll never forget.

The long trip back to Oslo

After a well deserved rest we set off on our three day adventure back to Oslo. It was sad saying goodbye to our incredible fjord views but we were ecstatic to have finally ticked the Arctic Circle off our bucket list. On the trip back to Oslo we visited two amazing UNESCO world heritage sites: a 12 hour detour to the Vega Islands archipelago and a stop at the historic mining town of Røros, both unplanned but hey, it worked out well for us!

Arriving back in Oslo three days later we were finally able to take time to appreciate what we’d accomplished. Since leaving Bud four days previous we had driven over 2,000 km, visited the Arctic Circle, seen two amazing and lesser known UNESCO World Heritage sights and had a crazy amount of fun. We’d call that a success! 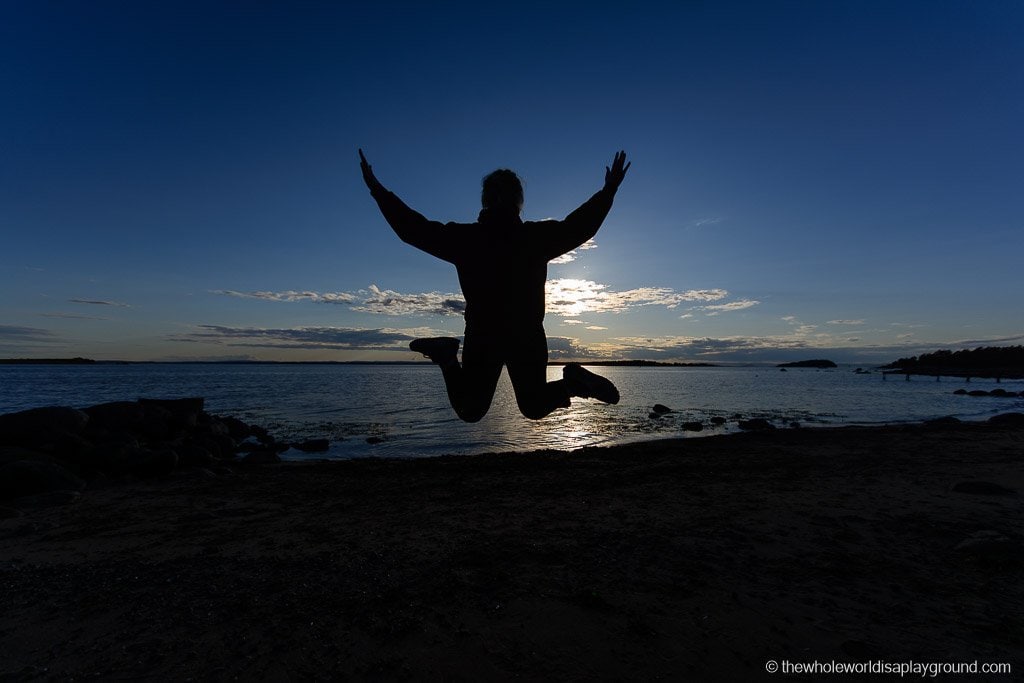 For more Norway adventures check our our Norway page here! Our fave is 39 pics of an epic roadtrip!