The Northern Ireland countryside is incredibly beautiful and has featured prominently in all 8 seasons of Game of Thrones. In fact, there are over 25 Game of Thrones filming locations in Ireland.

Two locations feature most frequently: the stunning Causeway Coast is home to numerous Game of Thrones filming locations in Ireland and the Titanic Studios are used to create interior scenes from the series.

Having spent years visiting the series locations in our home country, this is our guide best Game of Thrones filming locations in Ireland. We hope you have as much fun exploring as we had!

Map of Game of Thrones Filming Locations in Ireland

We’ve put together this map which shows all the Game of Thrones Filming locations that we’ve visited in Ireland and have included below. 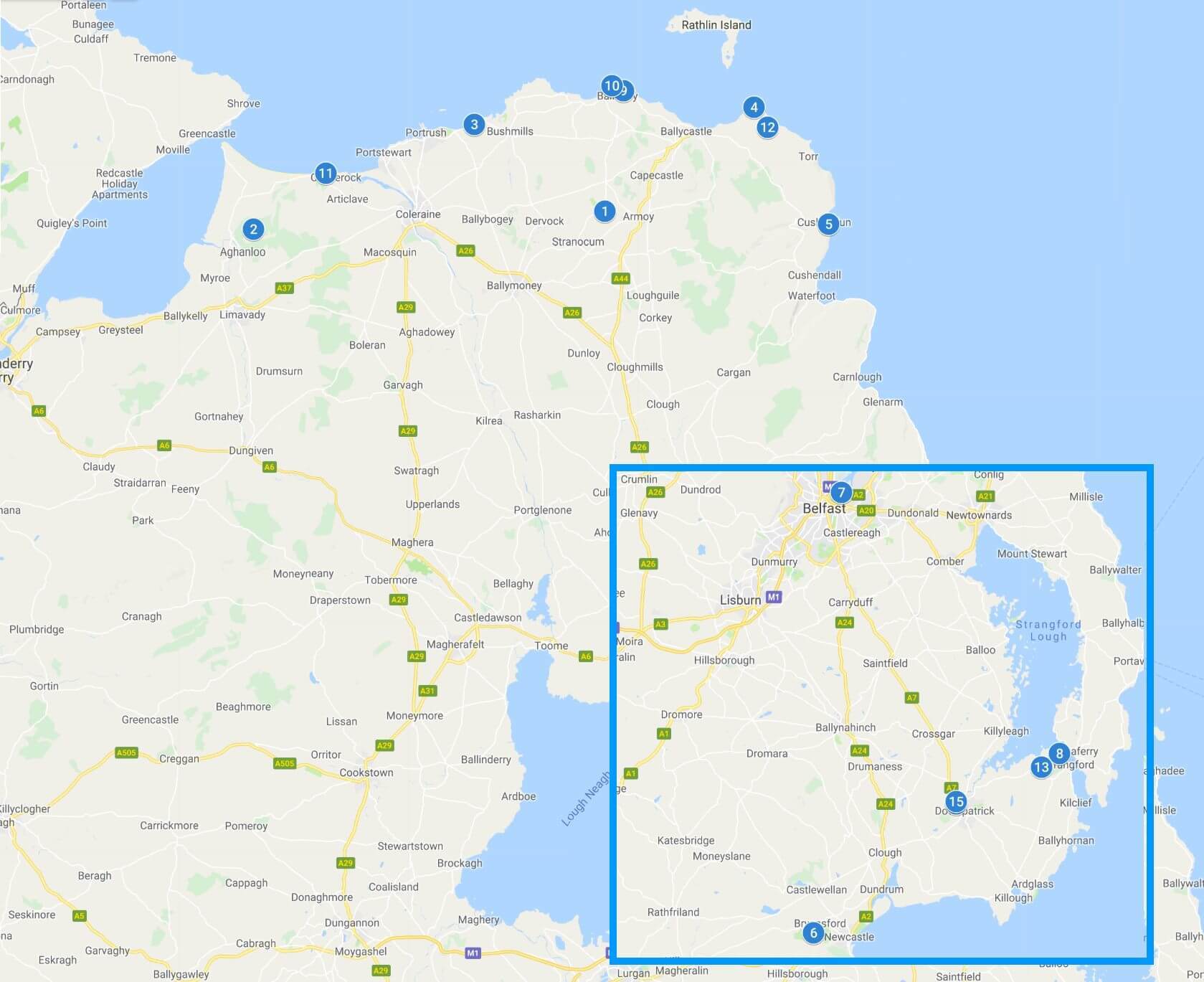 Map of the best Game of Thrones Filming Locations in Ireland

Click here for an interactive Google map of all these locations

Renting a car is definitely the best way to explore the Game of Thrones locations in Ireland. A rental car will allow you the flexibility to visit the locations when on your own schedule and plan ahead to avoid the tourist crowds. Driving in Ireland is easy by international standards and the road quality is excellent. Having your own car gives you the flexibility to travel at your own pace and see places that are simply not possible on group tours or public transport: for example, the lovely Ballintoy Harbour is not accessible by bus or coach.

If you prefer to join a tour, you can book a Game of Thrones day tour from Dublin or Belfast. The tours include many of the locations below and it is a fantastic way to see everything in one day.

Book from Dublin     Book from Belfast

From the Kingsroad, represented by the unique Dark Hedges, to the Dragonstone set on Fair Head Cliffs there are so many iconic locations to be explored.

WARNING! This Game of Thrones filming guide contains references to specific scenes from Game of Thrones (we won’t mention any spoilers from Season 8) so do exercise caution if you haven’t watched the episodes and want to avoid spoilers!

1 | The Dark Hedges as The Kingsroad

Location: Bregagh Road, between Armoy and Stranocum in Co. Antrim

The stunning avenue of 18th Century beech trees appeared in Game of Thrones Season 2 Episode 1 when Arya Stark escaped from King’s Landing disguised as a boy.

Until recently it was possible to drive down the actual road itself, however, access has now been restricted to pedestrians to help preserve the future of the trees.

Visitors are encouraged to use the car park at the end of the road and explore this incredible Game of Thrones filming location on foot. We had a lot of fun at the Dark Hedges and have visited Bregagh Road many times during our trips throughout Northern Ireland!

Game of Thrones Ireland Tip: The dark hedges are best visited early in the morning before the tour groups arrive at the site. This way you’ll have the road almost to yourself to explore and photograph.

The Dark Hedges all to ourselves at sunrise

If you’re not afraid of the dark, the dark hedges is a super spooky place to visit after dark. We were lucky enough to drive down the road after dark before the restrictions on cars started. Even when walking the trees are incredible after dark! 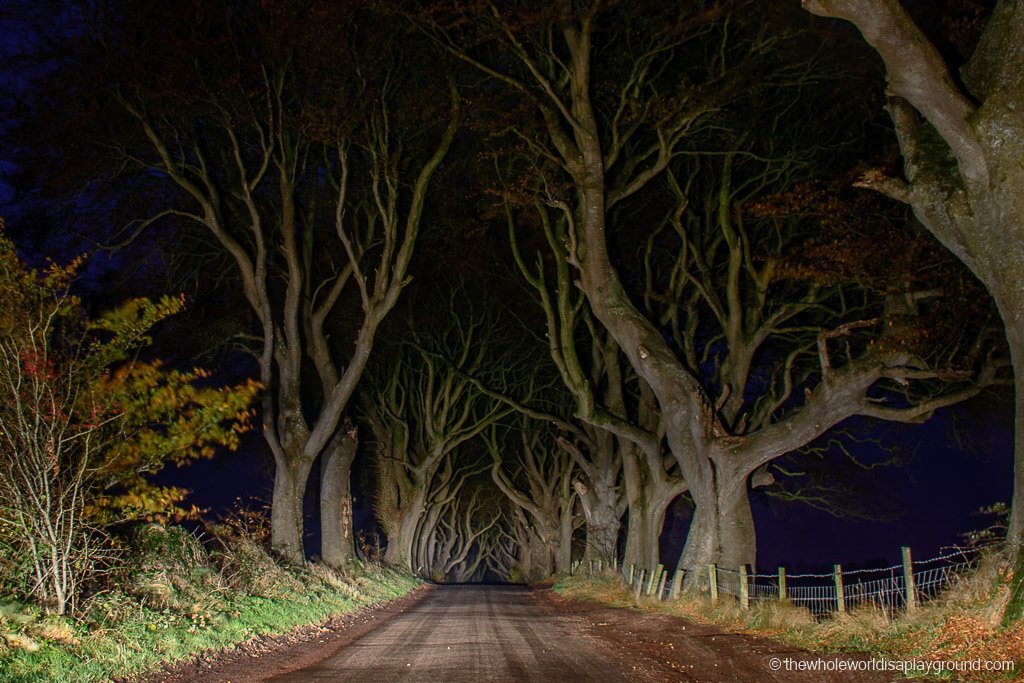 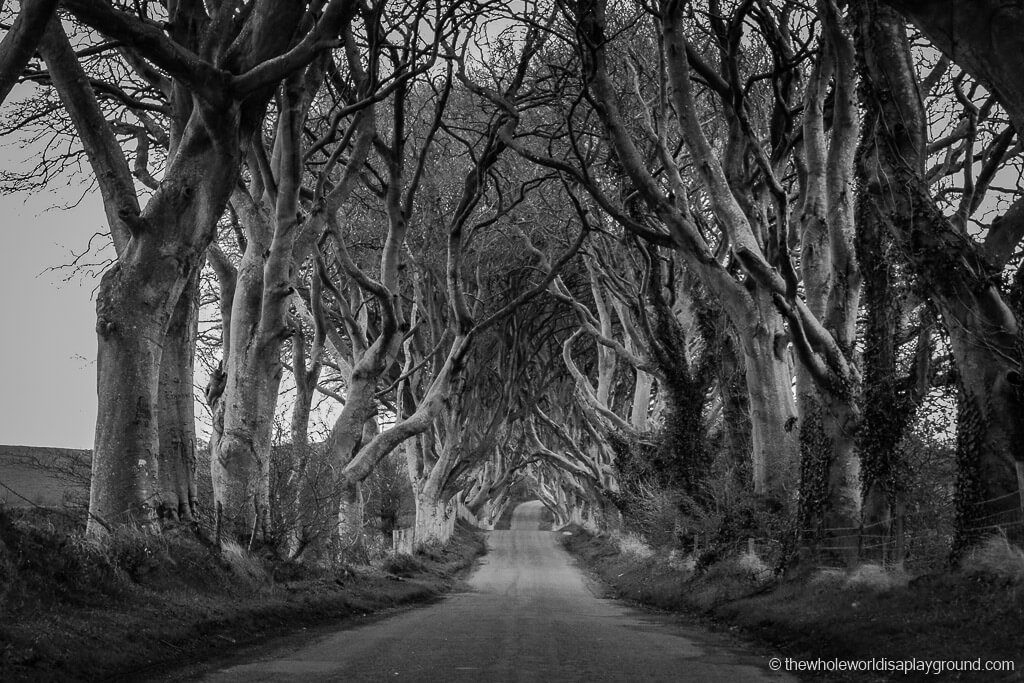 Where to stay on in Northern Ireland

The summit of Binevenagh showcases panoramic views across Lough Foyle and the Sperrin Mountains.

The area here was used for a number of different scenes, however the most memorable was when Daenerys, having been rescued by her dragon Drogon above the city of Meereen in Season 5 Episode 10, is spotted surrounded by a huge Dothraki horde. 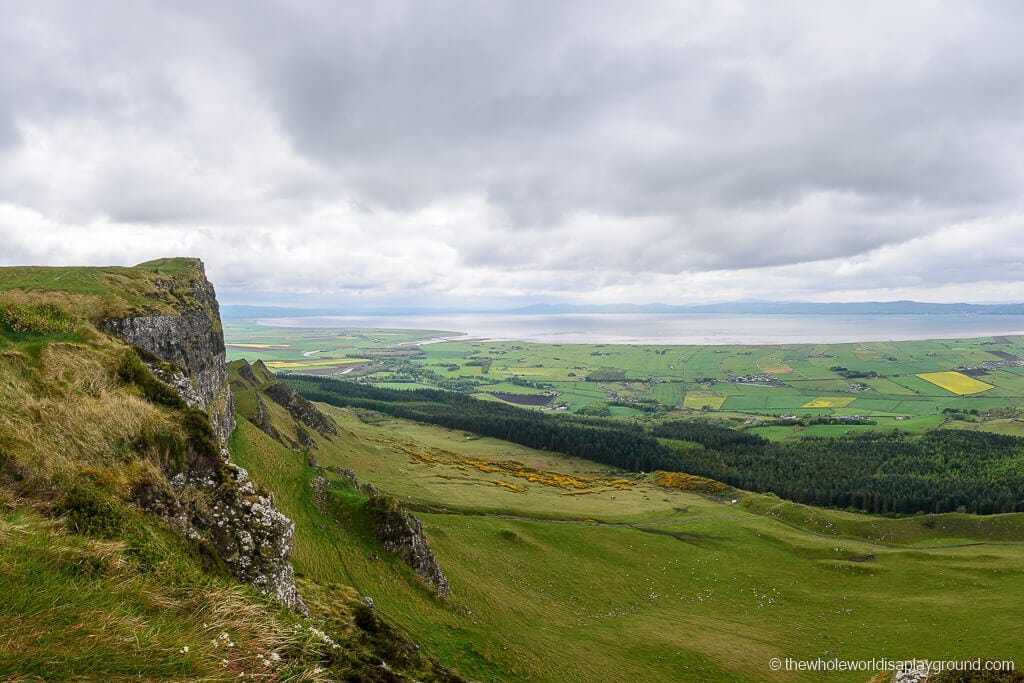 The view from Binevenegh close where Game of Thrones was filmed

The ruins of the medieval Dunluce Castle are perched on the edge of jutting coastal cliffs overlooking Northern Ireland’s stunning Causeway Coast.

The castle was built in the 1500’s and dramatic tales surround its history with stories of dark spirits inhabiting the castle and the kitchens tumbling into the sea on a stormy night in 1639.

The amazing ruins of Dunluce Castle were used for many of the scenes for the House of Greyjoy, ruler of the Iron Islands. It’s one of our favourite places in Northern Ireland and one we have visited many times, even before Game of Thrones was released.

Seeing the ruins in person is easy to see why the producers of Game of Thrones chose Dunluce Castle as one of the main filming locations. 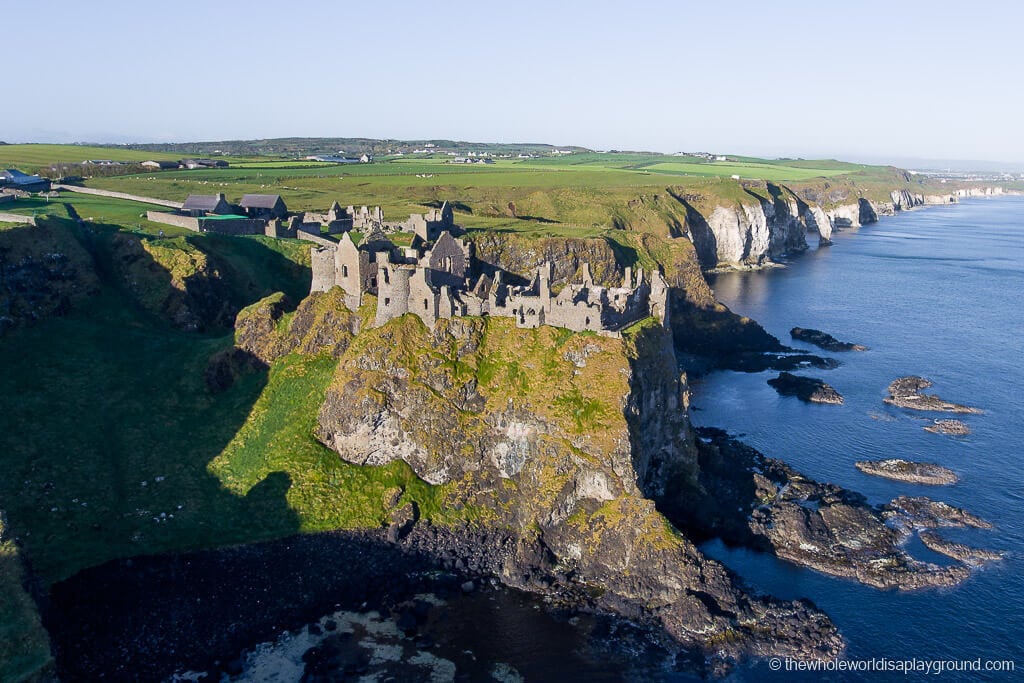 Dunluce Castle where Pyke Castle was set in Game of Thrones

Northern Ireland’s tallest cliff face, the Fairhead Cliffs rise hundreds of metres above the Causeway Coast. The cliffs appear in Season 7 Episode 3, The Queens Justice, when Tyrion asks Jon Snow if he can help and where Varys told Melisandre that they would both return and die in ‘this strange country’.

A short walk from the car park will bring you to the edge of these incredible cliffs where a lot of these scenes were filmed. 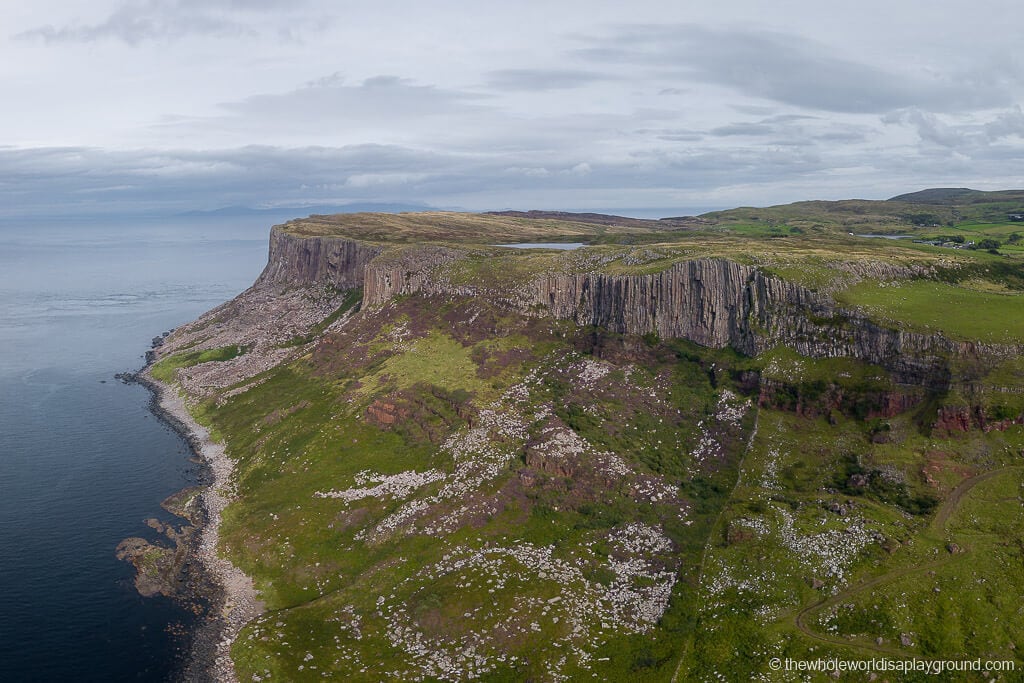 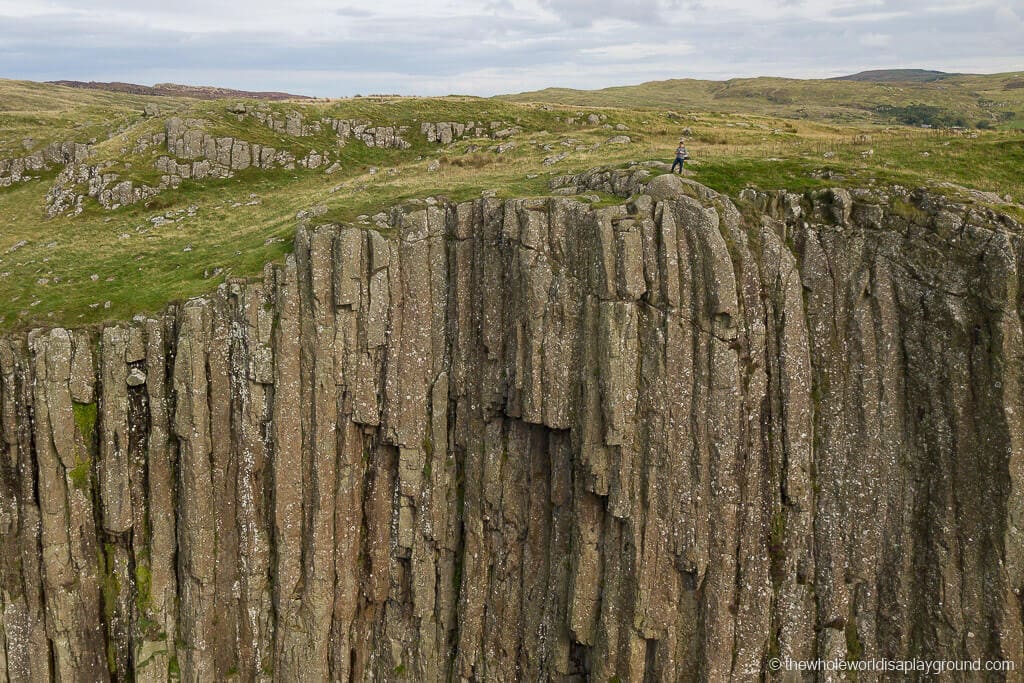 Located right on the eastern coast of Northern Ireland is the small town of Cushendun, the Cushendun Caves are where Davos Seaworth and Lady Melisandre landed ashore in Season 2.

The caves are also the location of the birth of the shadow baby. Make sure to spend some time or grab some lunch in the lovely town of Cushendun which is a short walk from the caves. 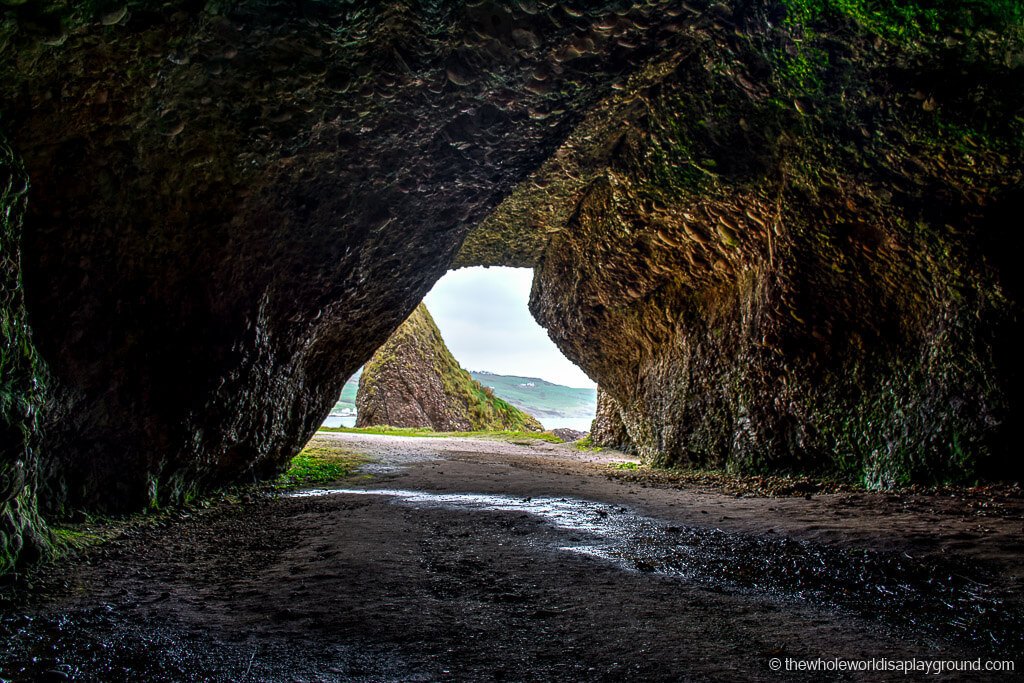 The view from inside the Cushensun Caves

Much of the filming of Game of Thrones takes place inside the gigantic Titanic Studios in the Belfast Docklands. The studios are some of the biggest in Europe and are built on the site where the original Titanic ship was built.

It is here that most of the fixed sets and indoor shoots are made and filmed. On occasion, there are larger sets constructed, including scenes for the upcoming Season 8. 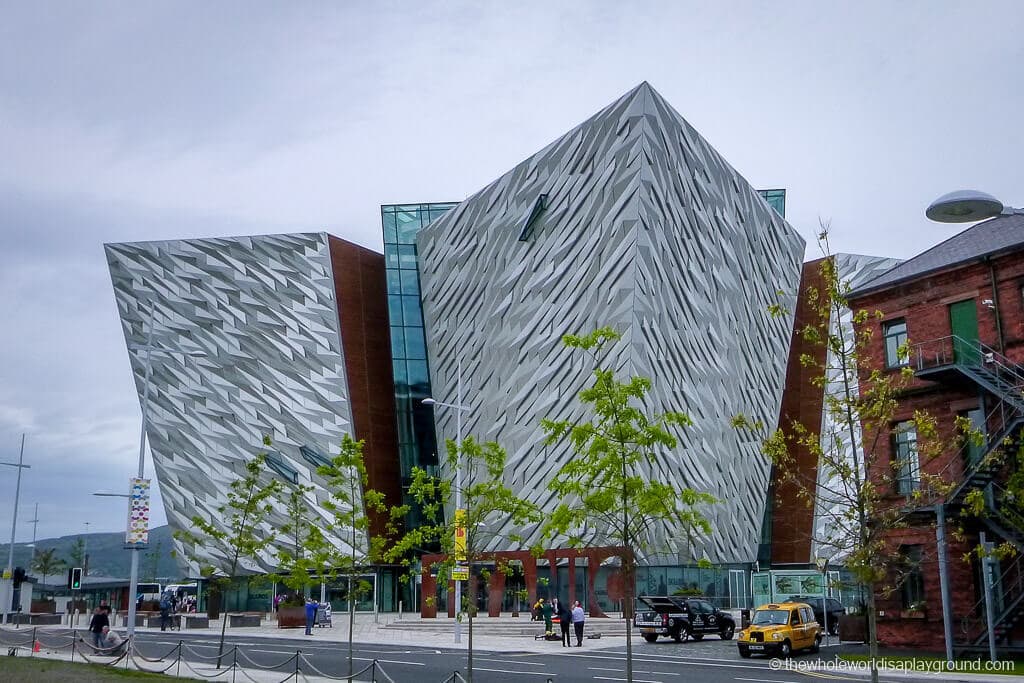 The Titanic Museum in Belfast

Tollymore Forest Park is one of our favourite places to visit in Northern Ireland as the walks and hikes throughout the park are fantastic. and it features regularly in Game of Thrones.

It’s the setting for The Haunted Forest where the Three Night’s Watchmen encounter a White Walker and it is also the scene of Theon Grevjoys escape attempt when he is pursued by Ramsay Snow. 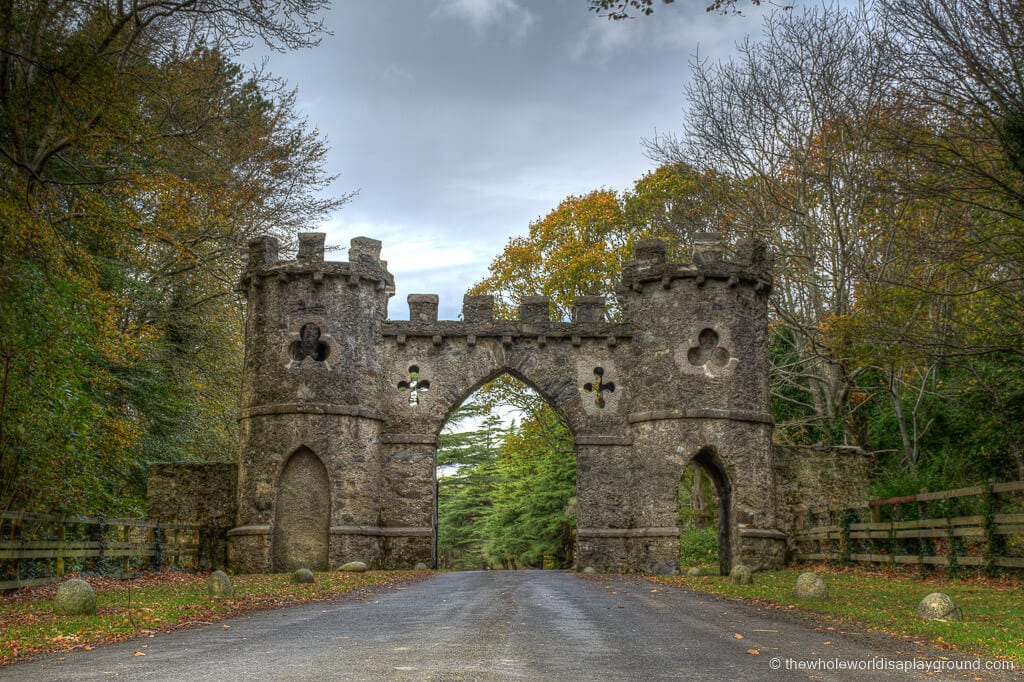 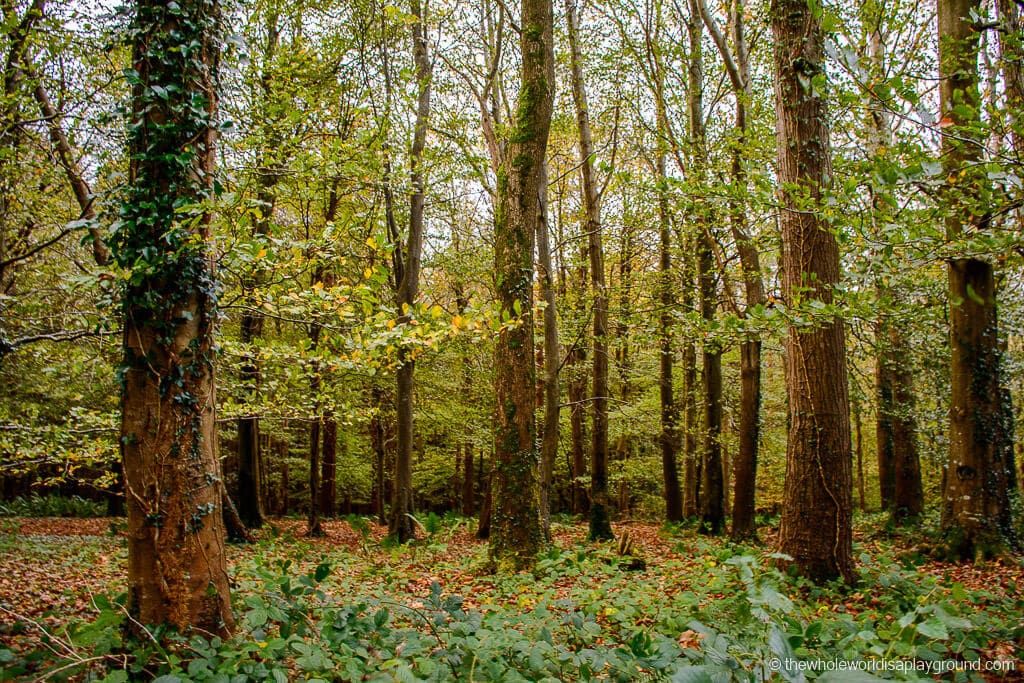 The forests of Tollymore Park

Audleys Castle at Strangford Lough was chosen as a filming location for several scenes from Season 1 and Season 2. It is the backdrop for King Robert Baratheon’s arrival at Winterfell in Season 1 and Robb’s Camp in Season 2.

Robb first meets Talisa here and it is where Alton Lannister was imprisoned. The area itself is really beautiful and worthy of an afternoon to explore and hunt out all the filming locations from Game of Thrones. 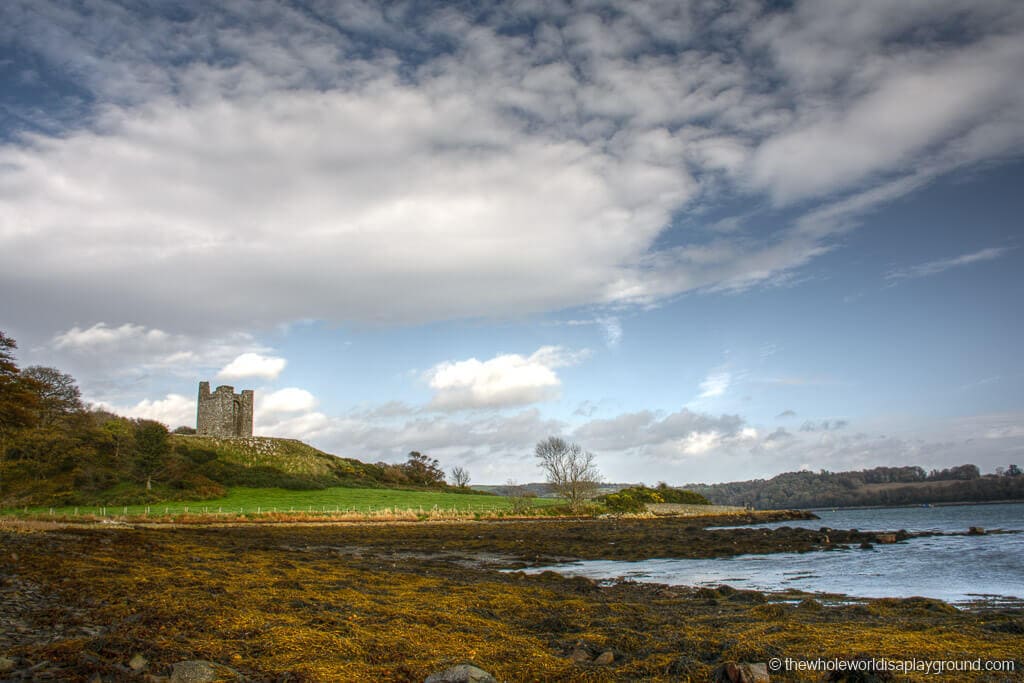 9 | Larrybane Quarry as The Stormlands

Located adjacent to the ever popular Carrick-a-Red Rope Bridge, the Larrybane Quarry is where King Renly set up camp in The Stormlands during Season 2.

The quarry is also where the tournament in which Brienne of Tarth was introduced took place. 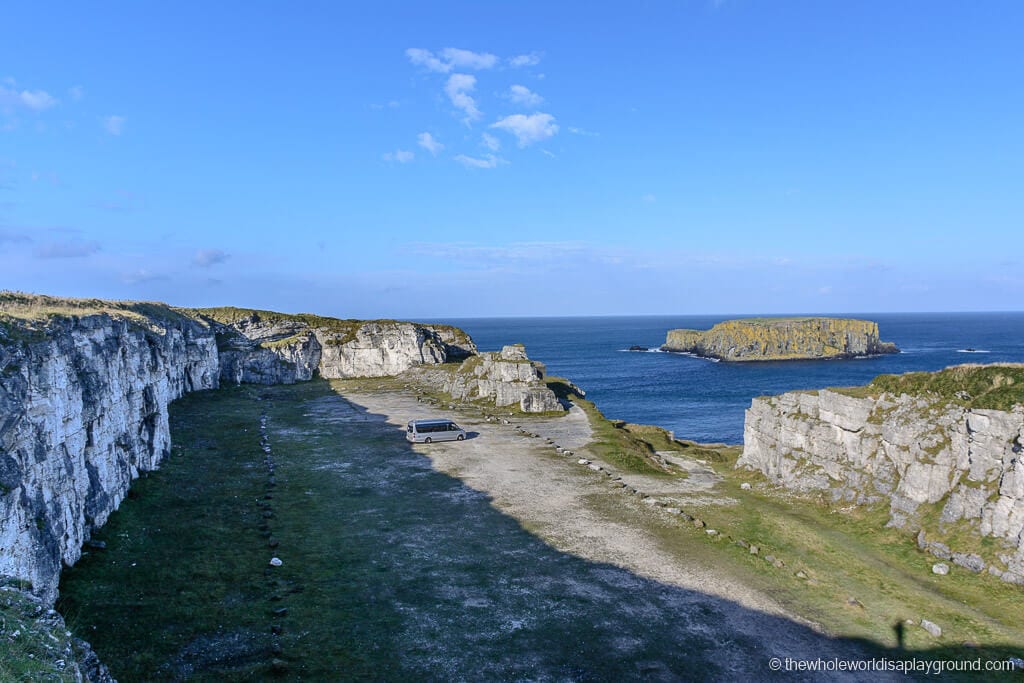 The Larrybane Quarry which was used for filming

10 | Ballintoy Harbour as The Iron Islands

Ballintoy harbour was the setting for a number of scenes which were based in the Iron Islands. One of the most notable was for Theon’s return to the Iron Islands as well as some of the areas around Dragonstone.

It was here that Theon first met his sister Yara, was baptised in the name of the Drowned God and paid homage to the ship ‘Sea Bitch’. 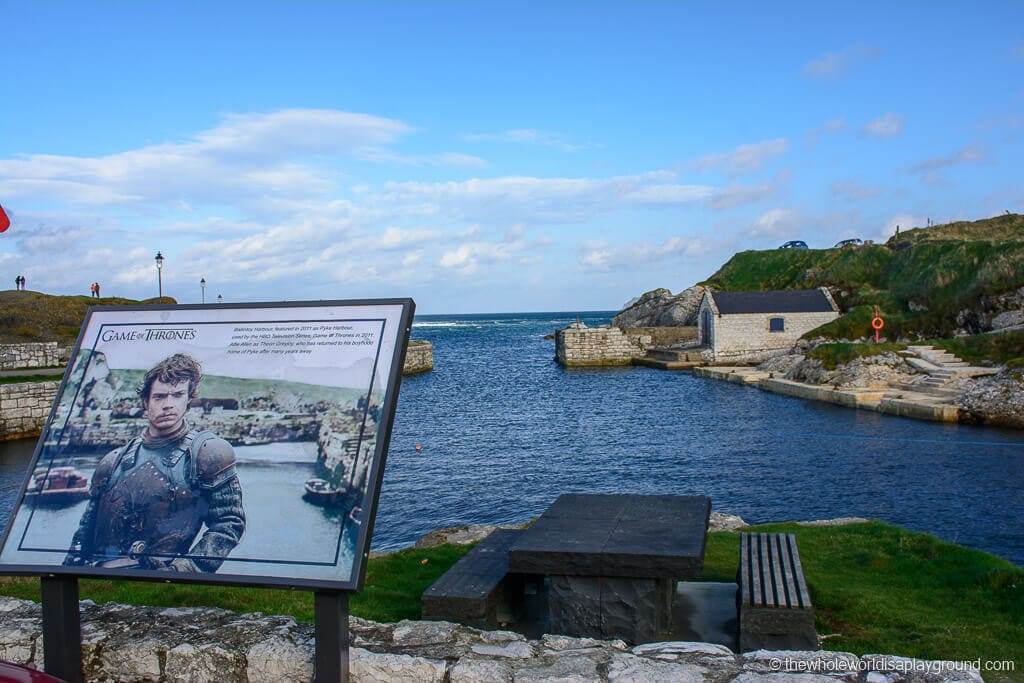 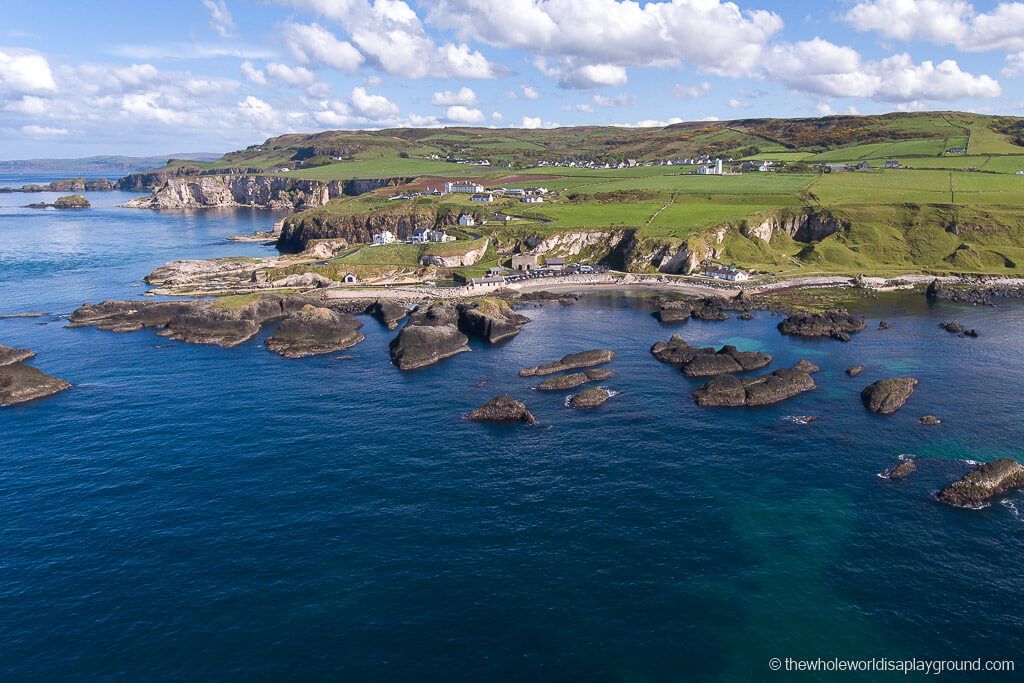 Ballintoy Harbour shot on our drone

Downhill Beach served as the filming location for Dragonstone, the place where the seven gods of Westeros were sacrificed by Lady Melisandre.

The instantly recognisable Mussenden Temple which overlooks the beach featured prominently in a number of scenes. 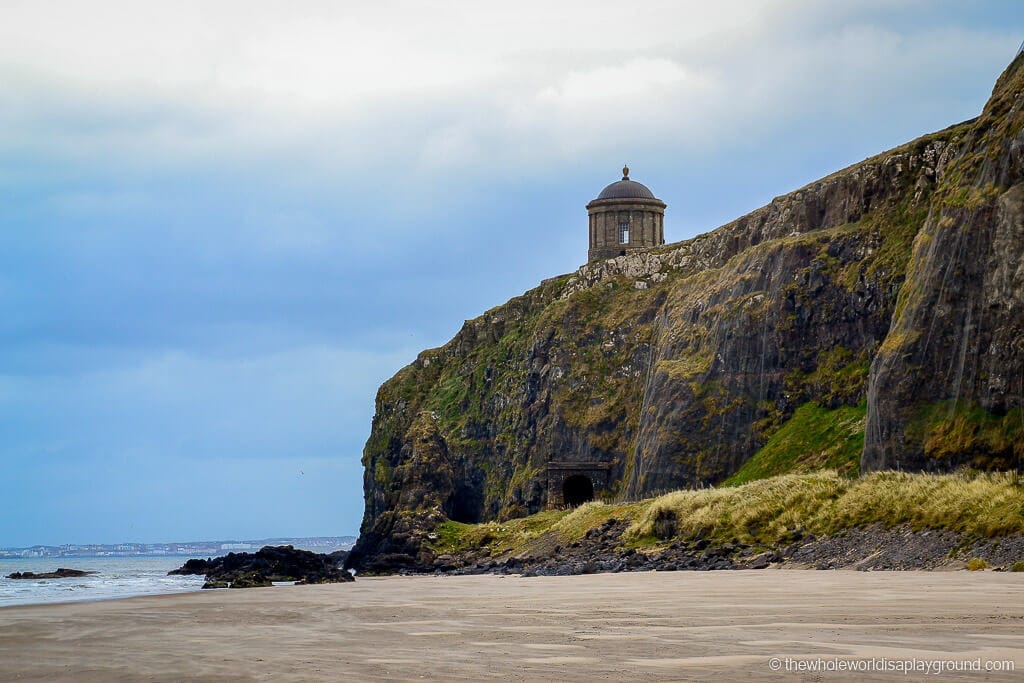 Downhill Beach and the Mussenden Temple 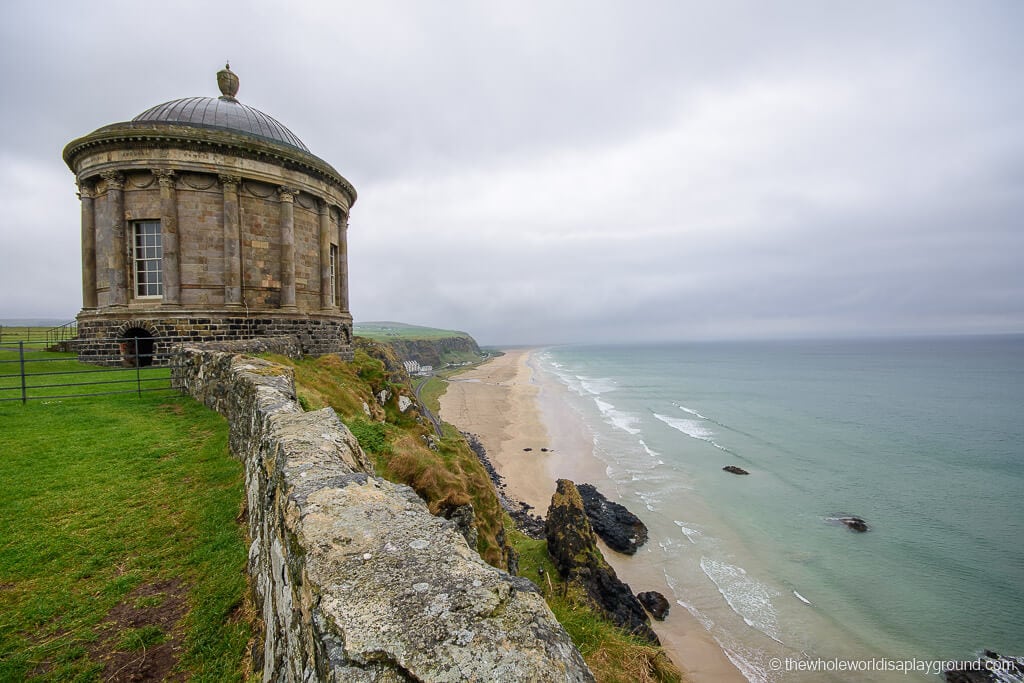 12 | Murlough Bay as The Road to Pyke

Hidden away on the northeast coast of Northern Ireland is the beautiful Murlough Bay. This secluded and relatively hard to visit bay was used as the filming location of Theon’s horse ride with his sister Yara and the scene where Davos Seaworth was shipwrecked after the Battle of Blackwater Bay.

It also features in Season 5, Episode 6 when Tyrion Lannister and Ser Jorah Mormont make their way to Mereen and are taken prisoner after being spotted by a passing slave ship. 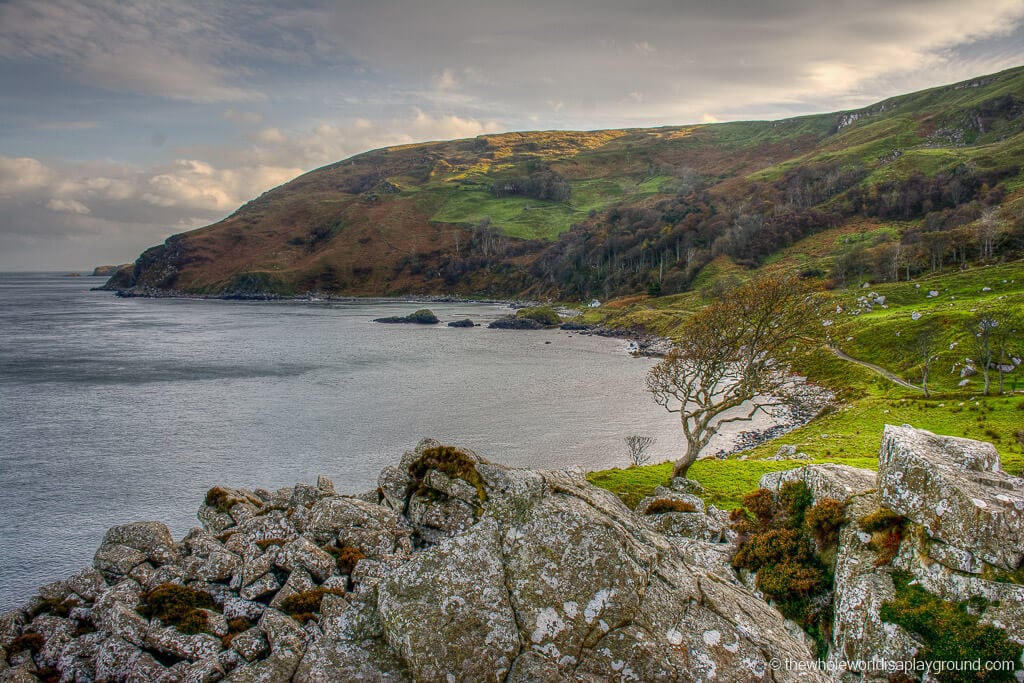 Castle Ward features as Winterfell’s Courtyard in Game of Thrones and featured a number of times in Season 1. It was here that King Robert Baratheon arrived at Winterfell and was met by Stark during Episode 1 and this was where they talked during the hunt in Episode 2.

Castle Ward made a return in Episode 10 when Bran and Osha were at Winterfell and it is also where Bran, Jon and Robb practised their archery skills. 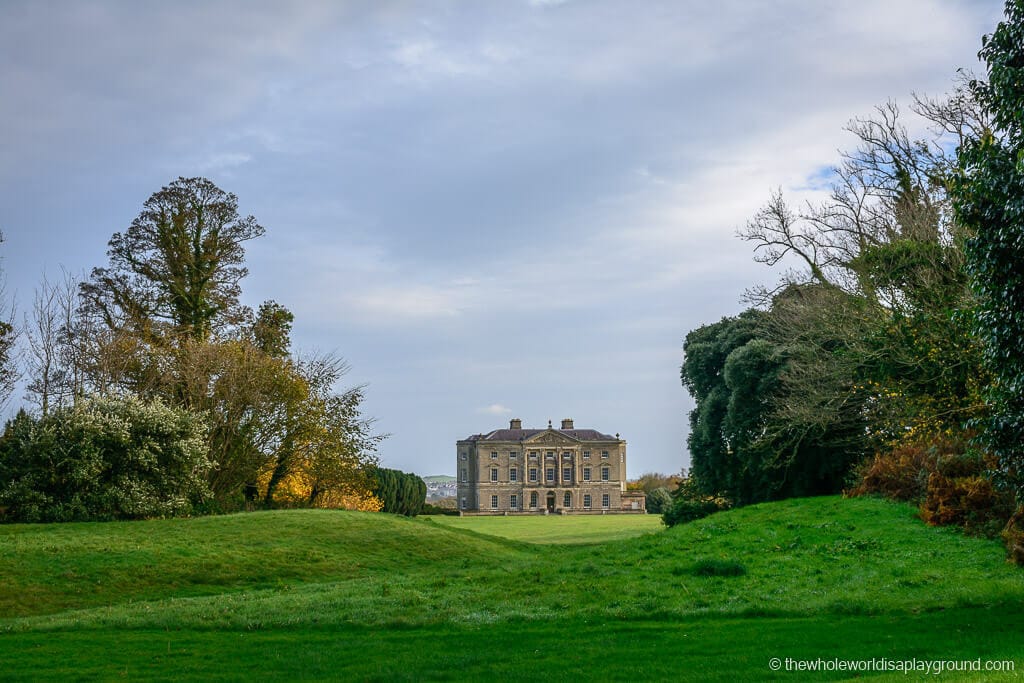 The Riverlands are home to the Tully’s and the scenes of Hoster Tully’s funeral were shot along the River Quoile. 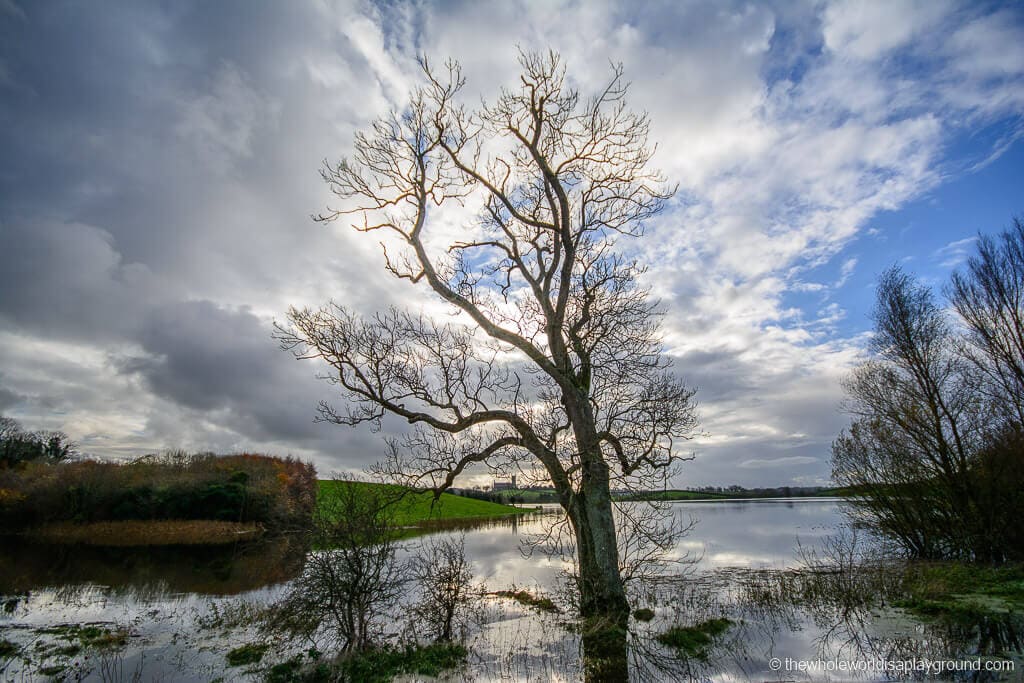 The River Quoile was where the Riverrun scenes were filmed

Inch Abbey is another regular filming location used in Game of Thrones. The first and main scene shot here was of Rob Stark’s camp which was located here in season one. It is where he was proclaimed the King of the North after the Battle of Whispering Wood. 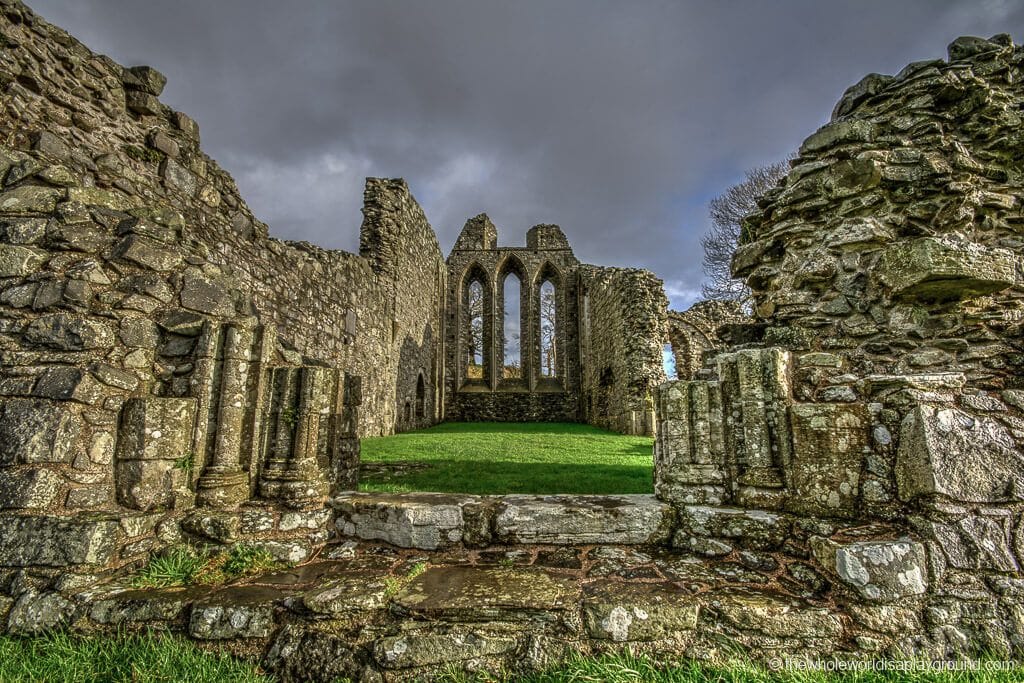