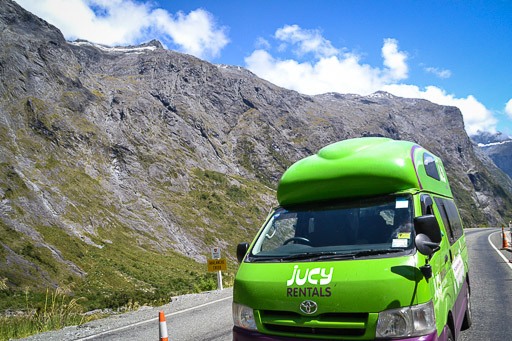 When Dave and I first started planning our year out we both made a list of our must sees and dos and then tried to meet somewhere in the middle.  We both wanted to see New Zealand.   I was thinking beautiful boutique hotels.  He wanted the campervan experience.  So we negotiated.  In return for my time in the campervan I would enjoy two weeks in a five star resort in Thailand.  Not a bad deal as it turned out, campervaning around New Zealand was one of the big highlights for both of us.

We were due to arrive in New Zealand in the summer peak season and the prices reflected this. A couple of our friends had rented a Jucy camper a few years prior and had a blast so we decided to check them out.  Their prices were cheaper than most of the others and we were able to pick up in the North Island and drop off in the South.  Even better, like their Facebook page for a 10% discount on the rental or check out @JUCYWorld for a twitter discount.  Some other rental companies that were well represented on the campsites and are probably worth checking out are Wicked, Appollo, Escape, Britz, Maui, Spaceships and Mighty Campers.

Getting Juced up! Picking up our Jucy

We were arriving from China into Auckland at some very early hour of the morning.  Be sure to check the office opening hours, when we were there the Jucy office didn’t open to 8 a.m. so we had to spend a few hours at the airport trying not to blow our budget on airport food and finding a free wi-fi provider to pass the time.  It was at this point I discovered Angry Birds, very entertaining!   We got through to the office around 8 a.m. and were picked up within about 30 minutes.

Overall, I’m a massive fan of the Jucy experience and customer service, they were outstanding on most occasions, but the Auckland airport branch was testing.  Jucy operate a same day turn around on rentals so despite the fact we had booked our van for 8 a.m. we were still waiting hours later.  The lady who served us was abrupt and unapologetic about the delay, and let’s face it, you don’t want to annoy the person allocating your home for the next month or two so we were pretty laid back.  There’s a supermarket and a few shops within a short walk so we were able to amuse and feed ourselves until eventually, well into the afternoon, our van was ready.

YAY! The Condo was ready and we got the grand tour from one of the Jucy reps.  We booked the Jucy Condo, it was a choice between this and the smaller Jucy Cabana, which is like a converted people carrier.  The Condo is a converted Toyota Hiace van with two double beds, a mini kitchen with a gas cooker, fridge, sink, cupboards and a chemical toilet (our toilet looked brand new and we never used it, unless you’re free camping there isn’t really any necessity.  It’s not like you’re going to sit and relax on a portable toilet on the side of the road.  And then clean it up!).   It’s marketed as sleeping up to 4 people but it was perfect for the two of us.  We used the upper double bed as storage for our rucksacks and for the bedding during the day and it meant we didn’t have to rearrange everything to the front of the car every night.  It was definitely a worthwhile extra for us. 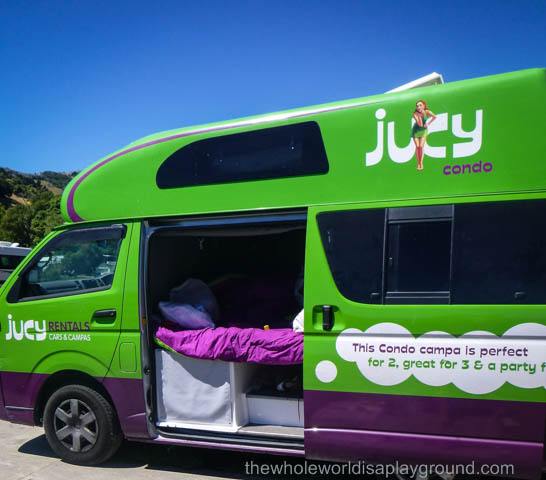 Our Condo was in really good condition and I have to admit, I’m fussy where I lay my head! For peace of mind we had gone for the stress free insurance option (NZD 25 per day) which meant there was no excess in the event of a claim, and this included insurance for additional drivers so the two of us so we could share the driving.  There were a few roads that were excluded from the insurance (Ninety Mile Beach – Northland, Ball Hut Road – up to Mount Cook and Skippers Road – Queenstown) but we didn’t travel on them so it wasn’t an issue for us.   Definitely check out the insurance options so see what is best for your trip.

In terms of branding renting a Jucy is like taking a EasyJet or Ryanair flight, you’re not going to forget how you’re travelling so you might as well embrace the bright colour scheme!  The outside of the van is bright green and even the bed sheets and duvet are green and purple.

The Condo was equipped with almost everything we needed for our stay and everything was very clean and relatively new.  According to the Jucy website the Condo interior was custom built in 2010. Included inside the Condo there was: 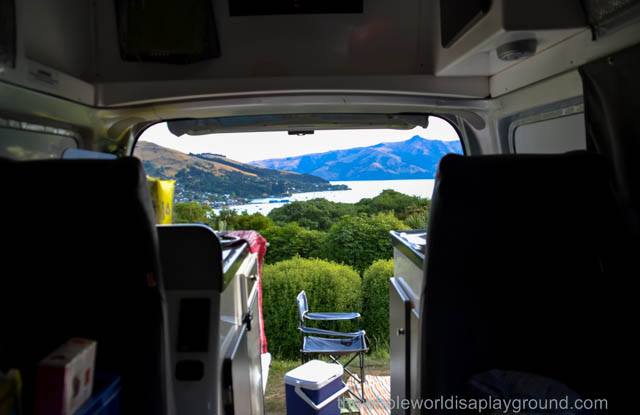 The Condo had around 140,000 miles when we picked it up.  It had a full tank of petrol (70 litres) and the 55 litre water tank was also full.  It was an automatic transmission and easy to drive.  The Jucy website states consumption of 10 to 12 litres per 100km. 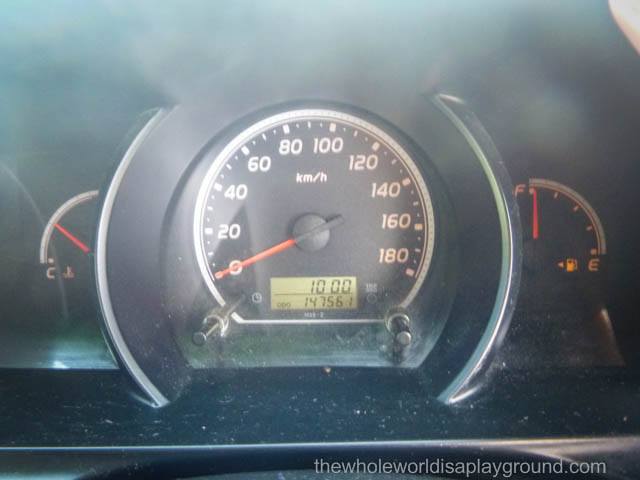 I was slightly worried about driving a camper van but the Condo is quite narrow so the adjustment from a car was relatively small.  We had no issues with the Condo during our trip.

Watch out for the other Jucy Condos or Cabanas on the road.  Most other Jucy drivers flashed their lights and waved when we met them, this amused us no end on long journeys, it brought me right back to my innocent ‘I spy’ car journeys as a child.  Unfortunately I’m not able to do two things at once when driving so I couldn’t partake but my husband is a lot more skilled than me and we had great fun playing this game!

The bench seat in the back pulled out to meet the single seats and form a very spacious, very comfortable double bed.  We used the spare duvet as a base and it was nice to have it to lie on.  There was another double above which we used to store our belongings and the bedding, it had a protective net in front of it to stop things flying around when we were driving.   We tested it out as a bed and it was identical to the downstairs bed in terms of comfort but I found it a bit weird being so close to the roof and not being able to sit up! 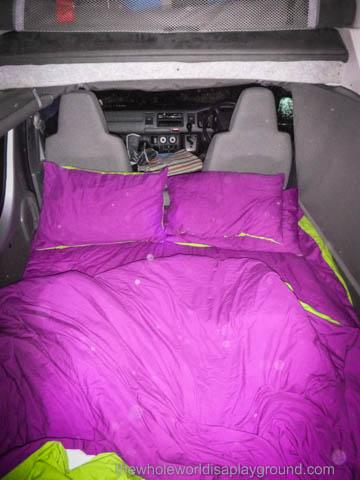 There were blinds on every window in the back and a pull down blind behind the front seat so the Condo was nice and dark for sleeping and had total privacy for getting dressed.

Once we had it figured out we were able to convert the Condo to a bedroom in less than 10 minutes and the same converting it back in the mornings.

Living in the Condo

It took us a few days to get our living arrangements organized and a system in place but, once we did, it was the perfect set up.

We cooked almost every day in the Condo as it was less hassle than taking all our stuff up to the kitchens in the campsite or when we didn’t have kitchen facilities.  During long drives we often pulled up for lunch in a scenic spot.  The kitchen was great for rustling up culinary treats like pasta, potatoes, beans, noodles and eggs.  Just remember to fill up the gas tank before returning the Condo. 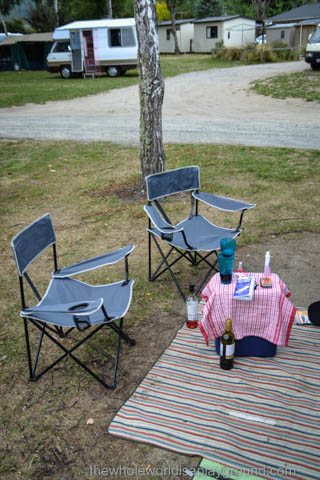 There are switches on the side of the kitchen which control the fridge, lights, radio and water and they have to be switched to on for each appliance to work.   It took us a while (and some spoiled food) to figure out how to work the fridge properly so its worth getting a demo on how to charge it when you pick up the Jucy.  There are two batters in the Condo, the engine battery and the domestic battery which powers the appliances.  The domestic battery is under the bench seat in the back of the Condo and the fridge doesn’t work if this battery is low.

I didn’t bring my hairdryer or straightening irons (I actually believed my husband when he told me it was pointless bring electrical items, in hindsight it did save me carrying them around for a year but my hair doesn’t look its best in the photos) so, if you’re as clueless as me, it is fine to bring electricals.  There is a power cable for hooking up to the power points on powered sites in the campsites and a few plugs in the Condo to run electricals off.

The Condo has a built in DVD player on the back wall, we didn’t use it but many campsites had DVDs to rent so it could be useful for entertainment.

We made a few purchases to make the Condo easier to live in while we were travelling, there’s plenty of the Warehouse stores around with all these items: 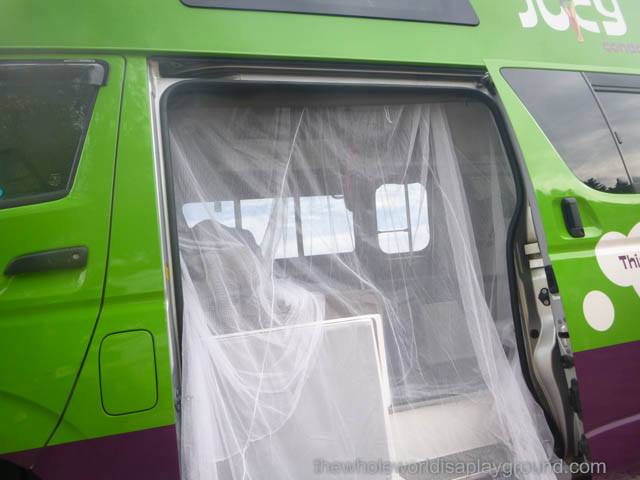 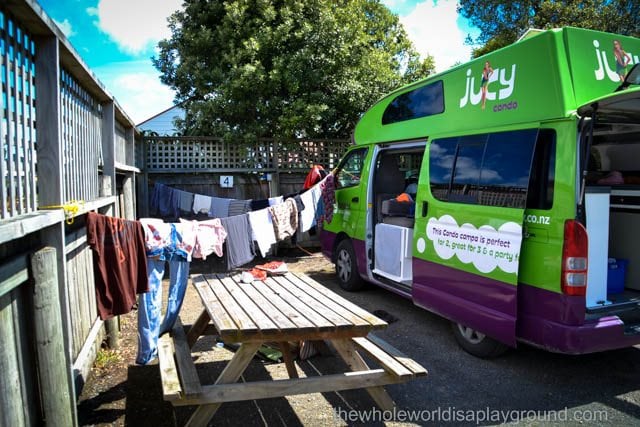 We read alot about the campervan experience before we left and there were a few reports of camper vans being broken into.  It wasn’t an issue for us and we always felt 100% safe in our Jucy Condo, but we did use some basic security tips to keep our Condo safe.  They worked for us:

Sadly, we had to part with our Jucy in Christchurch after over a month on the road.  It was easy to get the Condo ready for its return and took about 30 minutes the morning we left:

It was hard saying goodbye to our girl, hopefully her new owners treated her with the love she deserves! The Christchurch guys were great and the return was hassle free.  We waited about 10 minutes for a ride to the airport and we were on our way.