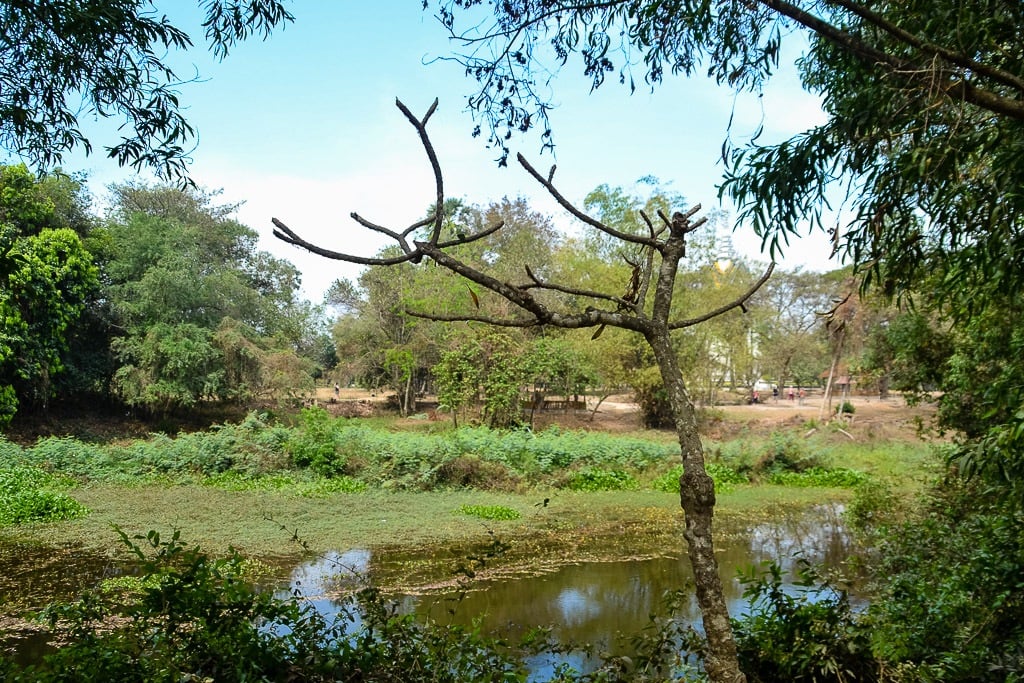 There are some travel days that change the way we see the world forever and discovering the dark past of Cambodia was one of those days.

A trip to the Killing Fields of Choeung Ek in Phnom Penh provided us with a devastating insight into the history of a country torn apart by war, political instability and mass genocide. Together with Angkor Wat, the Killing Fields are an absolute must visit while in Cambodia and, despite leaving with broken hearts for the country and its people, our trip to Choeung Ek still remains as one of the most memorable days of our travels.

Note: this article contains sensitive content and images which some may find upsetting. 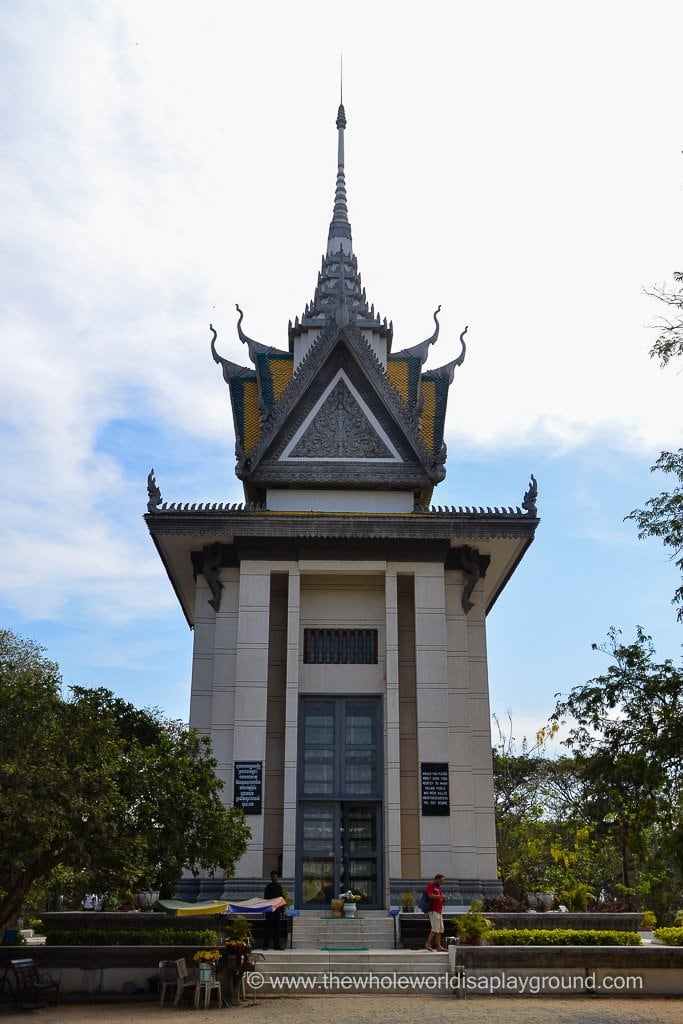 After a 45 minute tuk tuk ride from our Phnom Penh hotel we arrived at the Killing Fields of Choeung Ek.

I wasn’t entirely sure what to expect and, being mostly unaware of the true extent of the horrors that had occurred in Cambodia, I hadn’t at all prepared myself for what lay behind the gates of the once tranquil orchard: a mass grave for almost 20,000 men, women and children who fell victim to the Khmer Rouge regime and many of whom were tortured prior to their deaths.

It’s impossible to comprehend the horrors that transpired on this very ground in a regime which wiped out over 20% of the Cambodian population and claimed approximately 1.7 million victims in a 4 year period. 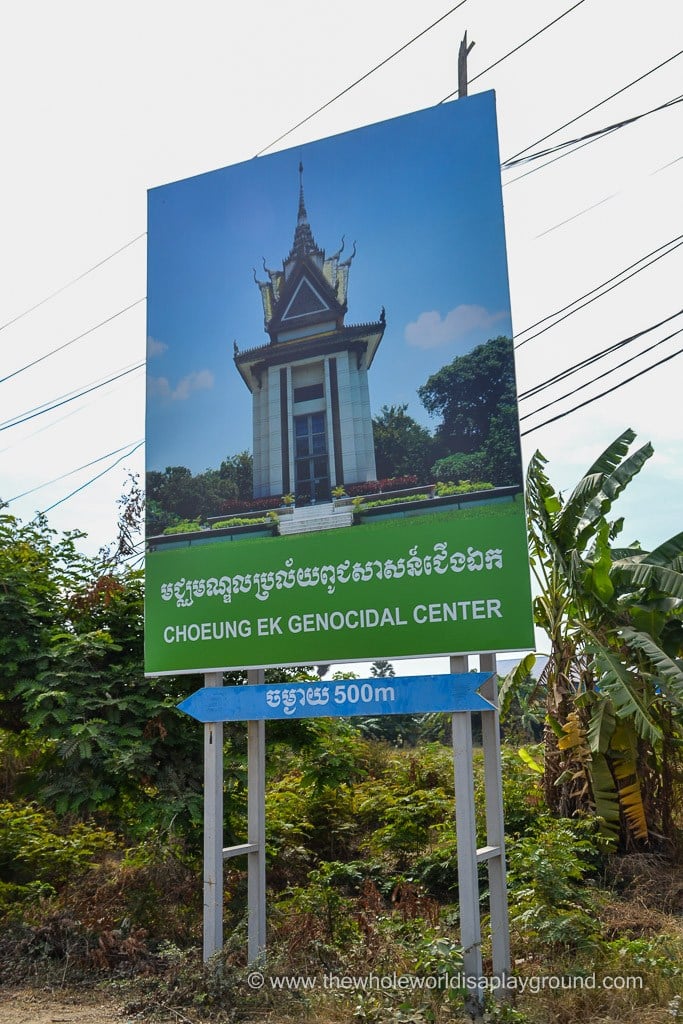 Choeung Ek is now a memorial which documents the passage of  the thousands of victims through the Killing Fields. It’s difficult to describe the incredible sadness that surrounds the site. Visitors wander around in silence listening intently to the audio tours, tears streaming down their faces. Fragments of bones surface during heavy rain and rags of clothing still protrude from the ground.

The majority of the victims were brought from S-21, Security Office 21, where they had been detained for months and were routinely tortured and interrogated. They were trucked out to Choeung Ek late in the evening where they faced execution. Two or three trucks travelled every month with each holding around 20 prisoners who would make their final journey to the Killing Field. 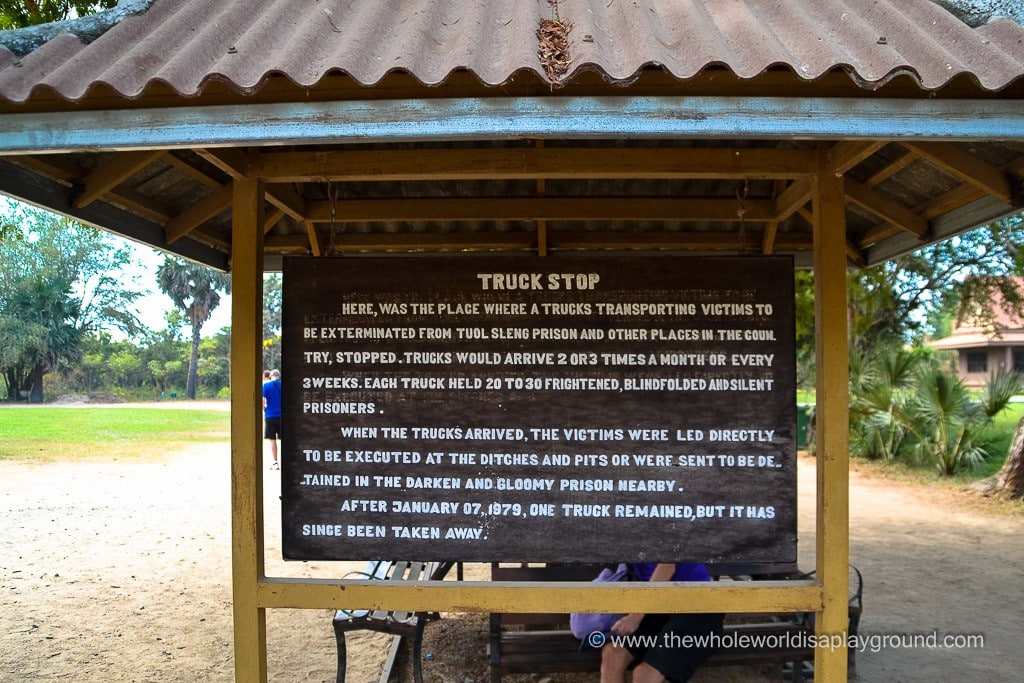 As bullets were deemed too expensive, the victims were clubbed to death and chemical substances were scattered over their bodies to ensure no one remained alive. 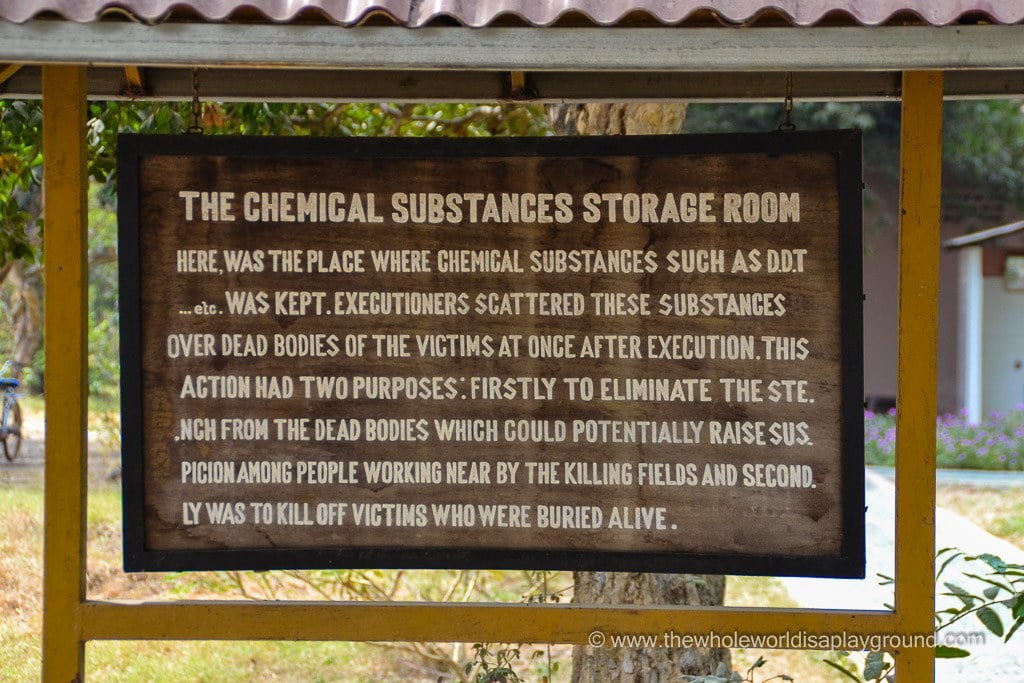 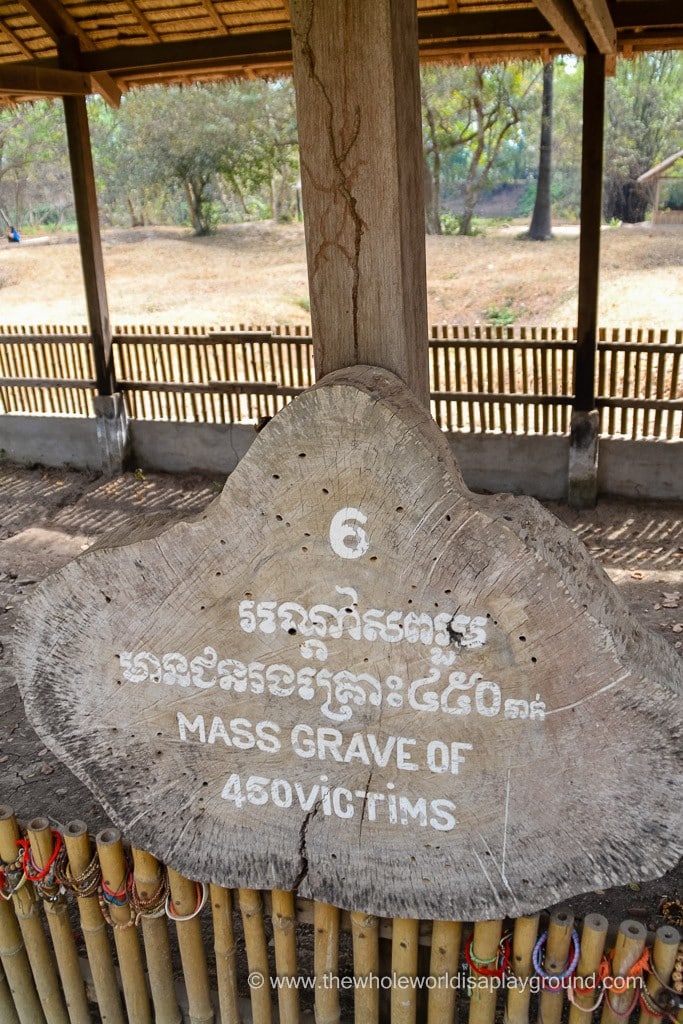 We reached the Killing Tree, a giant tree looming over the orchard, whose beauty belies the horrors of its past. The tree claimed the lives of many innocent children whose tiny bodies were bashed off the tree as a means of execution. The rationale was to stop them growing up and taking revenge for their parents’ deaths. 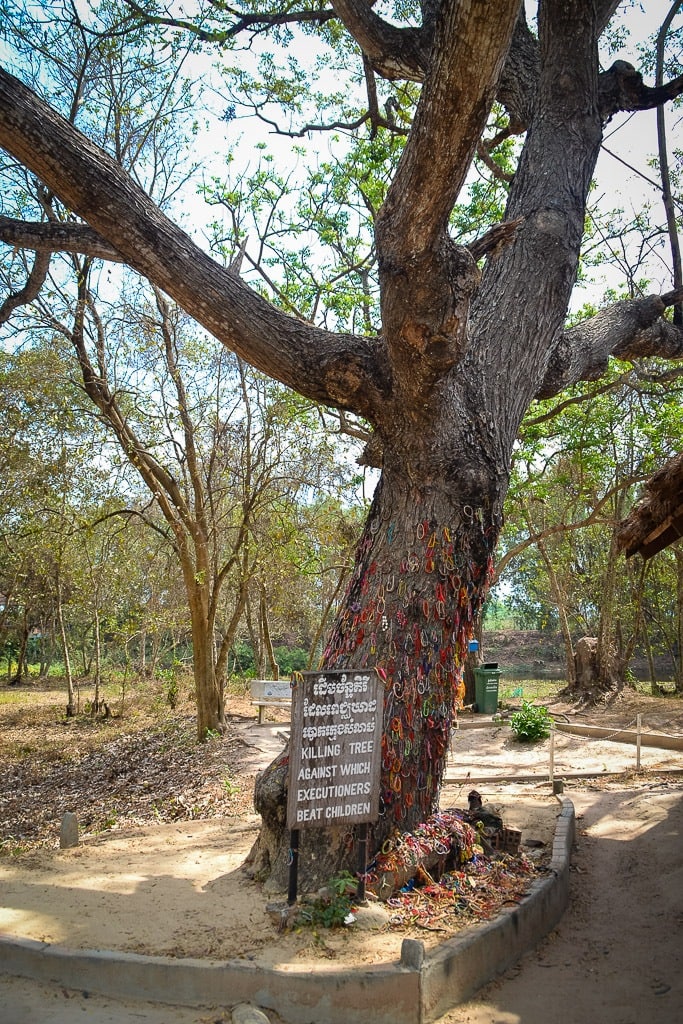 A huge collection of frendship bracelets adorns the base of the tree, a small gesture of solidarity from the visitors desperate to give something back to the victims.

The tour ends at the Buddhist Stupa, a memorial erected in memory of the victims of the Khmer Rouge regime. Thousand of skulls arranged in order of age and sex fill the memorial, many of which display visible signs of trauma. It’s impossible not to stare into the empty sockets and wonder what tortures they suffered and what horrors they witnessed before their death. 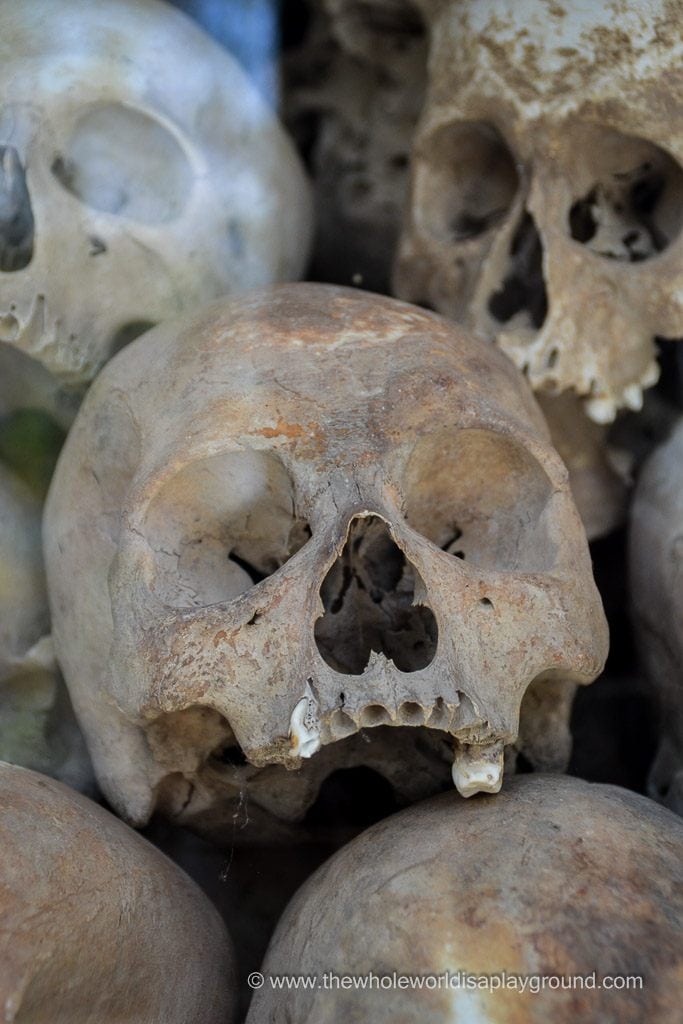 Today, Choeung Ek is a peaceful place and a respectful tribute to those who suffered so greatly at the hands of the Khmer Rouge. Despite it being an incredibly upsetting experience I wouldn’t hesitate to recommend it to anyone passing through Phnom Penh. The memorial documents a massive part of Cambodian history and is imperative to understanding what went on in Cambodia during those dark years.

I can honestly say it was one of the saddest sights I’ve ever seen and I shed many tears for the victims. I learned quickly that travelling is not all blue skies and finding myself. It’s about discovering as much as possible about a country, its history and, most importantly, its people who, despite their torturous past, are some of the loveliest and most welcoming we were lucky enough to meet on our travels.

In 1975 Cambodia was in the midst of a civil war between the US backed government and the Khmer Rouge, a communist group led by Pol Pot, when the capital city of Phnom Penh fell to the Khmer Rouge. Just three hours later, all civilians living in the city were forced to the country as they attempted to reset Cambodia to Year Zero by discarding all existing cultures and traditions. In Phnom Penh 2.5 million people were evacuated.

The Khmer Rouge wanted to eliminate anyone suspected of involvement in free market activities and purify Cambodia of capitalism. Residents were forced to relocate to agricultural labour camps where families were separated and inmates lived in destitute conditions. Those who came from the cities were brainwashed and children were alienated from their parents.

The Khmer Rouge ruled under the motto ‘To have you is no benefit, to lose you is no loss.’ Over 1.7 million lives were lost in the 4 year period through political executions, disease, starvation and forced labour. 17,000 people passed through S-21 before they were taken to the Killing Fields and executed. Only 12 survived. Around 20,000 mass graves have been discovered in Cambodia since the country was liberated by the Vietnamese from the Khmer Rouge after a 17 day campaign in 1979.


In 2006, with the backing of the UN, the Extraordinary Chambers in the Courts of Cambodia (ECCC) was founded to investigate the crimes against humanity during the reign of terror. In 8 years there have been just five indictments and one conviction at a cost of $200 million amid allegations of corruption.

The Killing Fields of Choeung Ek

Admission: US $6 including an audio tour available in several languages

Getting there: The Killing Fields of Choeung Ek are located 17km south of Phonm Penh and the journey takes about 40 minutes by tuk tuk (approximately US $10 – US$15 depending on how much you haggle )

5 thoughts on “Killing Fields of Choeung Ek, Phnom Penh, Cambodia: The saddest sight of all”