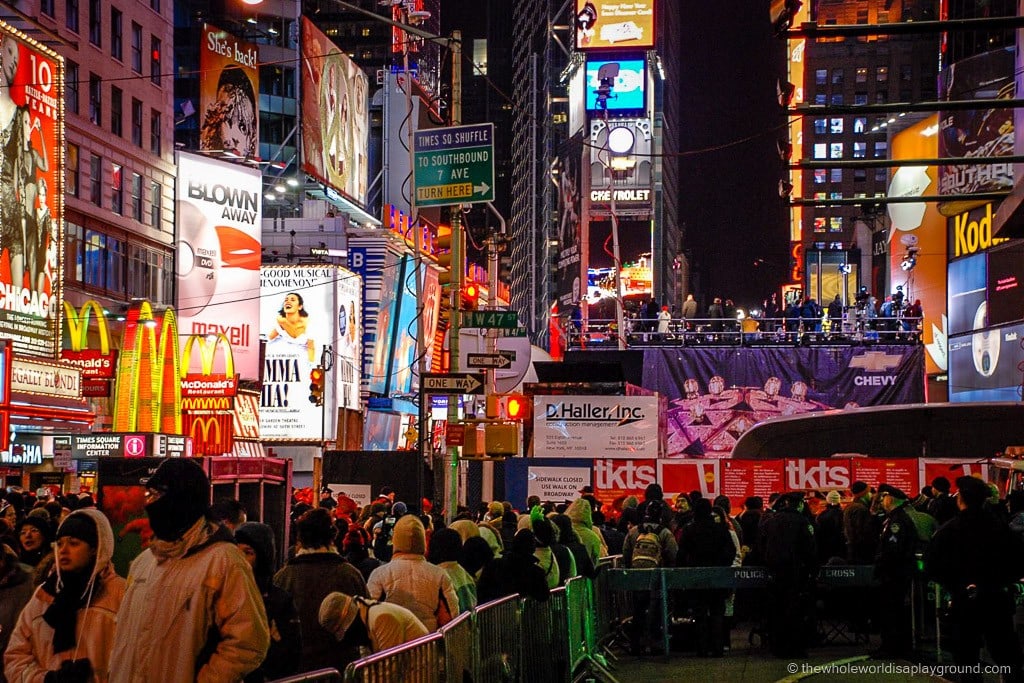 The ball drop on New Years Eve in Times Square has to be the most famous New Years celebration in the world! Given our fondness for a good party taking part in the celebrations have always featured highly on our bucket list. Every year we’d tune in with the other billion or so people across the globe, watch the clock strike 12 and sing along to Sinatra’s New York, New York. It looked like the greatest party in the world and we were ready to attend!

The Countdown to New Year’s Eve

We arrived in New York a few days before New Year and watched as the pens were assembled, security was tightened and the Chevrolet clock counted down to New Year. The excitement levels were building! 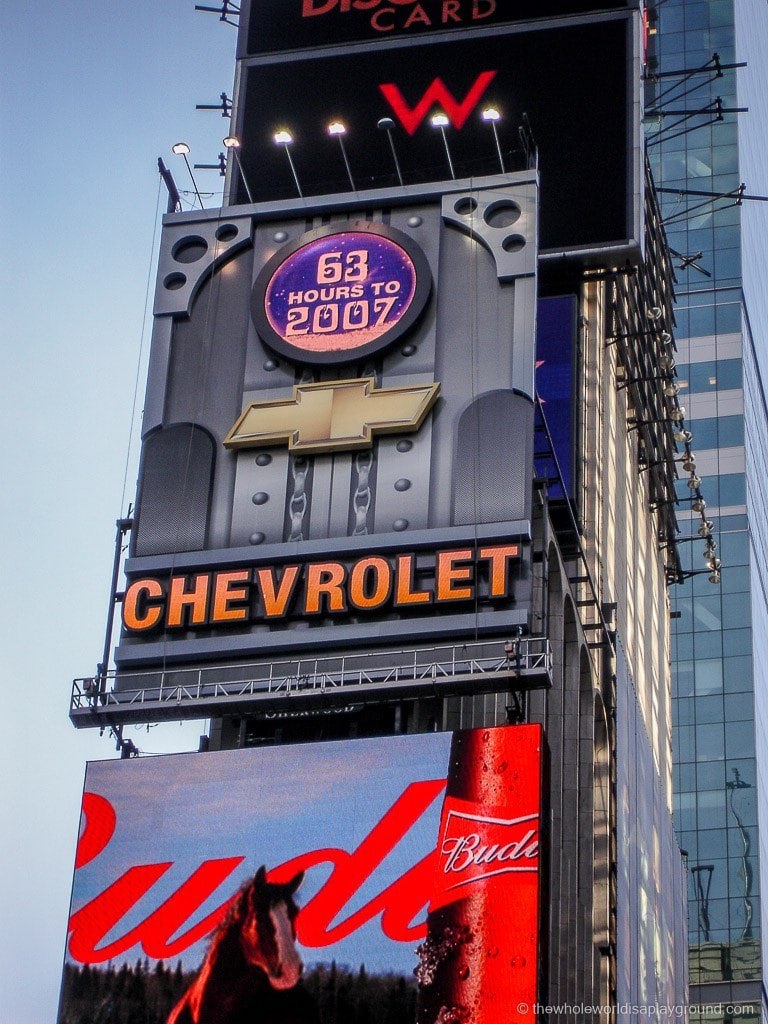 The big day was finally here! Times Square was crazy from early afternoon when the crowds began to arrive and the NYPD shut down access to Times Square. The Renaissance issued us with passes to allow us to pass through the NYPD checkpoints so we wandered in and out of the area as we pleased. Not that it was easy! The crowds were immense and everyone was trying to get somewhere!

The crowds gathering in Times Square: 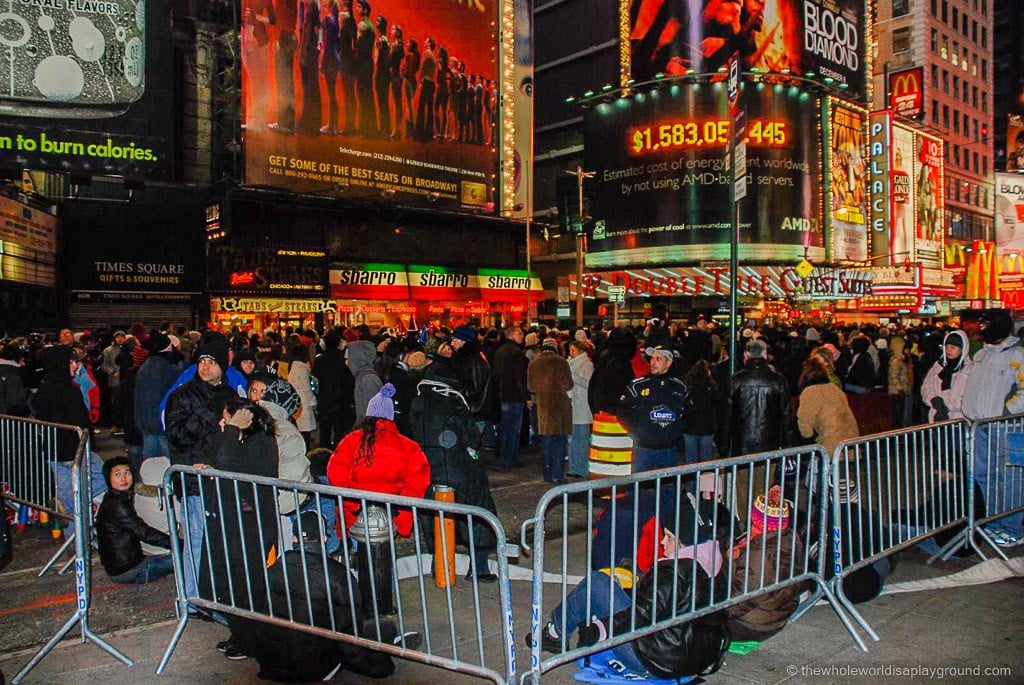 The Countdown to Midnight

We spent a fantastic evening enjoying good food and sipping bubbly with the noise of the Times Square crowds streaming through our open window. This was accompanied by impromptu visits down to the hotel pen to soak up the atmosphere and check out our favourite performers. The excitement levels were fever pitch and the crowd was incredible!

A trip down to check out the action! 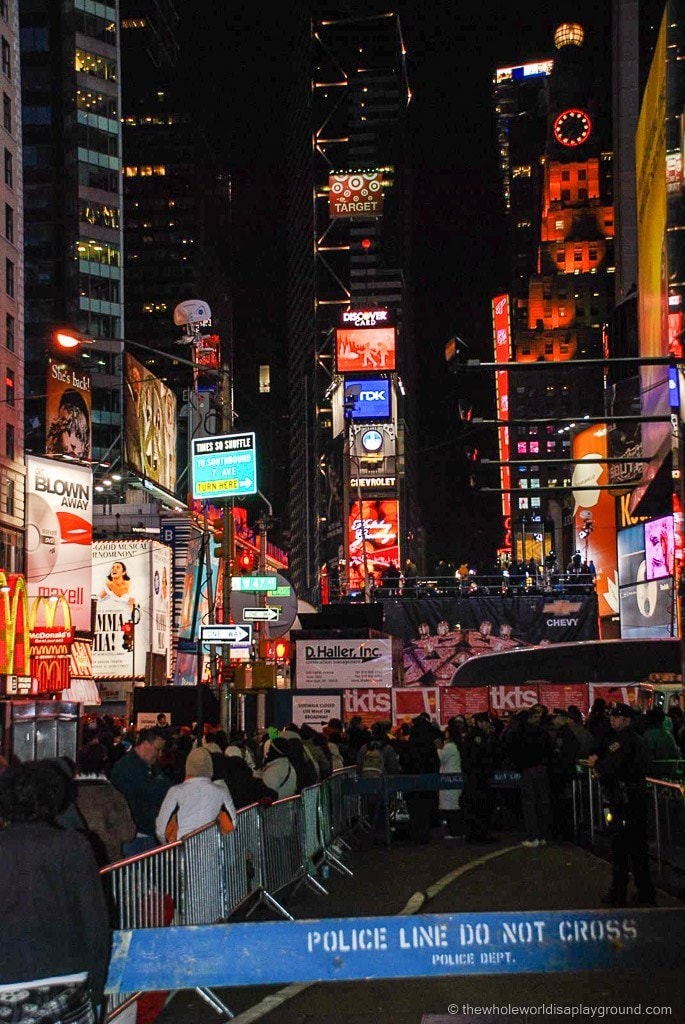 Soaking in the atmosphere (and a glimpse back to my dark haired days!) 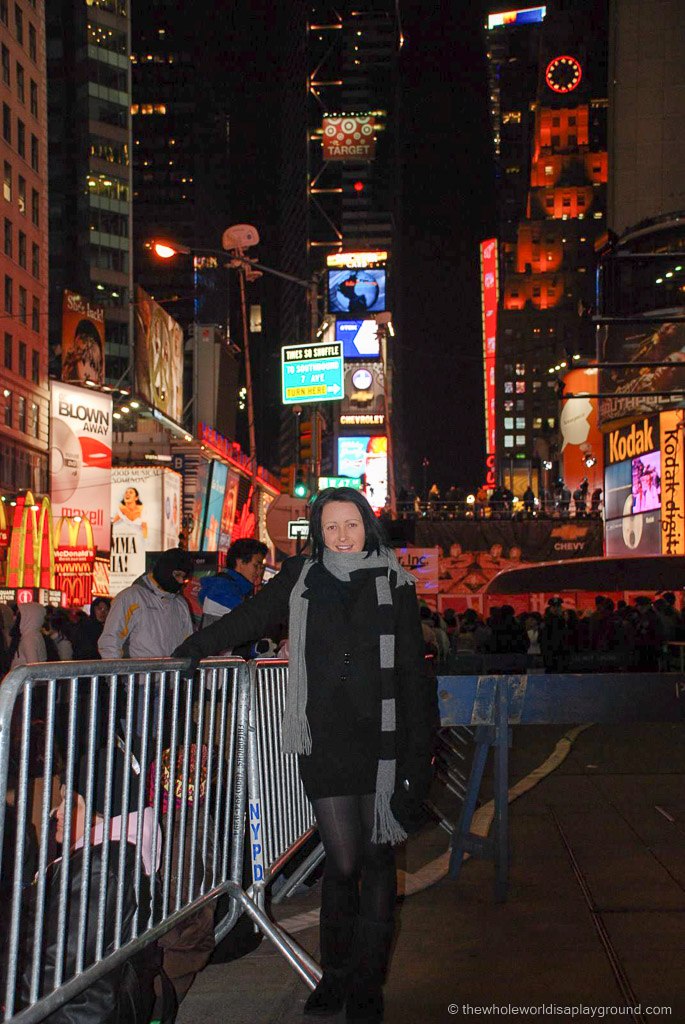 One million revellers crammed into the streets surrounding Times Square! 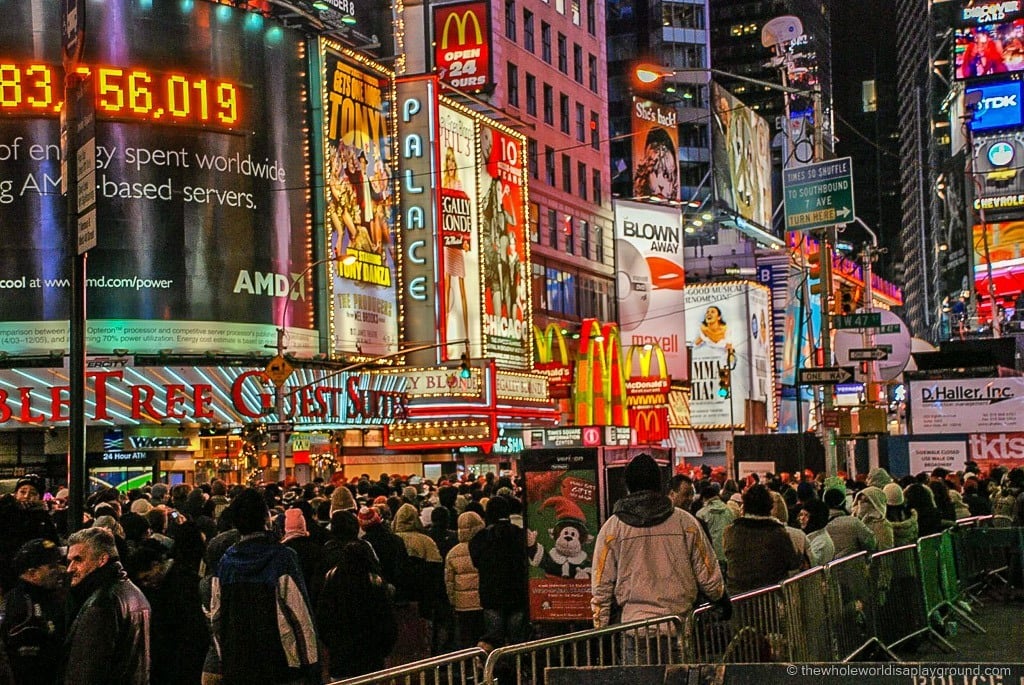 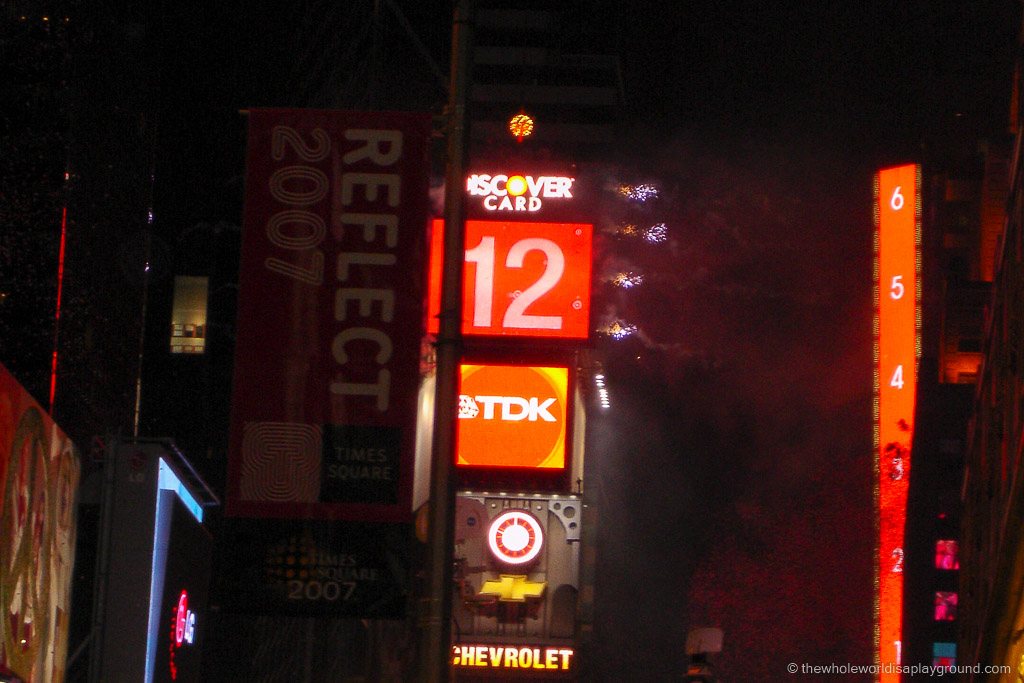 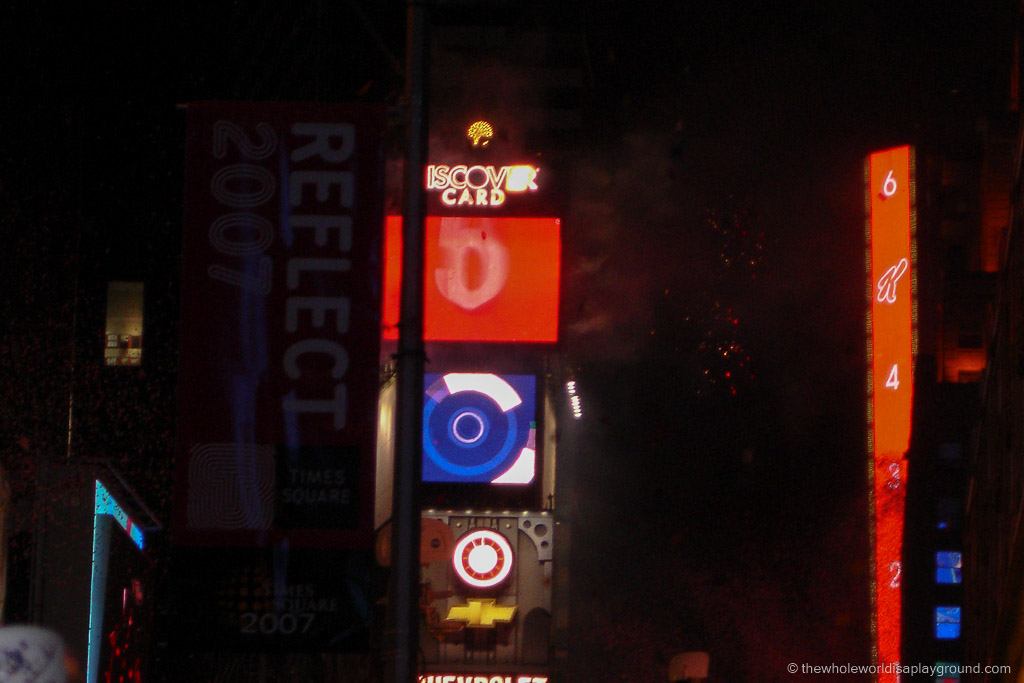 Millions of pieces of confetti fell from the sky as the fireworks exploded and a million people sang along to New York, New York. The place went crazy! 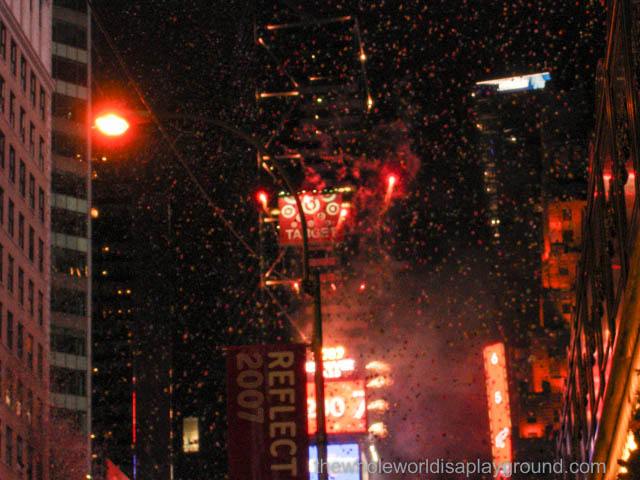 The New Year had arrived and we were bundled back into the calmness of the hotel as the celebrations ended. 30 minutes later we looked out our bedroom window and Times Square was empty as the street sweepers were called into action. There was no evidence of the massive party when we woke the next day, it was as if we’d dreamed it all!

It’s not just a matter of rocking up to Times Square for the midnight celebrations. Securing a good party spot involves arriving to Times Square in the mid-afternoon and being hemmed into a pen with other revellers until the clock strikes 12. No bathroom breaks, no food and, quelle horreur, no champagne to ring in the New Year. Houston, we have a problem! 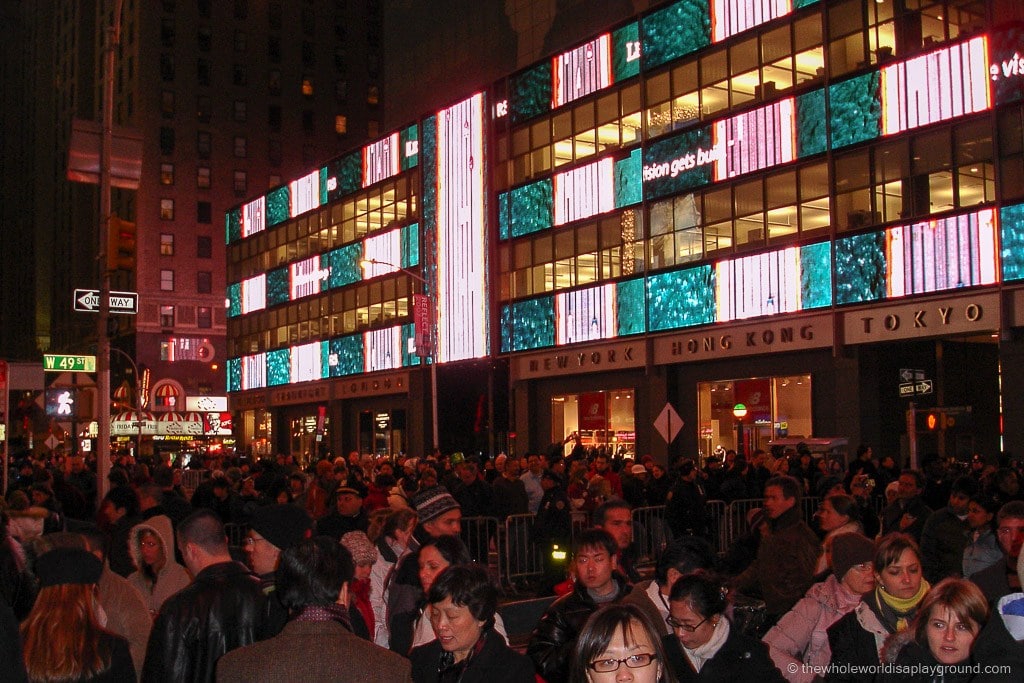 There are a few less time consuming alternatives. At a hefty cost of course! We opted for a Times Square hotel with a street entrance providing a ball drop view. The plan being to spend the evening sipping champagne and cocktails and then pop down at 11:45 p.m. to catch the countdown and ball drop. Perfect!


New Year’s Eve times Square: Is it worth it?

We had an absolute blast celebrating New Years Eve in Times Square. The crowds, the entertainment, the atmosphere and the countdown were amazing and we sang our hearts out (badly) to the iconic New York, New York. It was an incredible moment that we will remember forever! For us it was a once in a lifetime experience and we loved every second of it.

We did it the easy way! Standing outside for 10 hours in the cold with no access to toilets or food can’t be easy and is definitely not for us. We have massive respect for everyone who does, after all they are the reason ringing in New Year’s Eve in Times Square is such an iconic unmissable experience!

Where to celebrate New Years Eve in Times Square

We stayed in our favourite midtown hotel, the Renaissance Times Square. There are a number of hotels in the Times Square area with entrances offering a view of the ball drop and it is best to check with each hotel on their individual New Years Eve policy and view. Bars and restaurants in Times Square are also an option with venues such as Bubba Gump, TGI Friday and the Olive Garden (and many others) hosting New Year’s Eve parties. Do remember, access to the side walk is controlled by the NYPD so being able to watch the ball drop is not guaranteed even as a guest of the hotel/party venue.

The view from our pen: 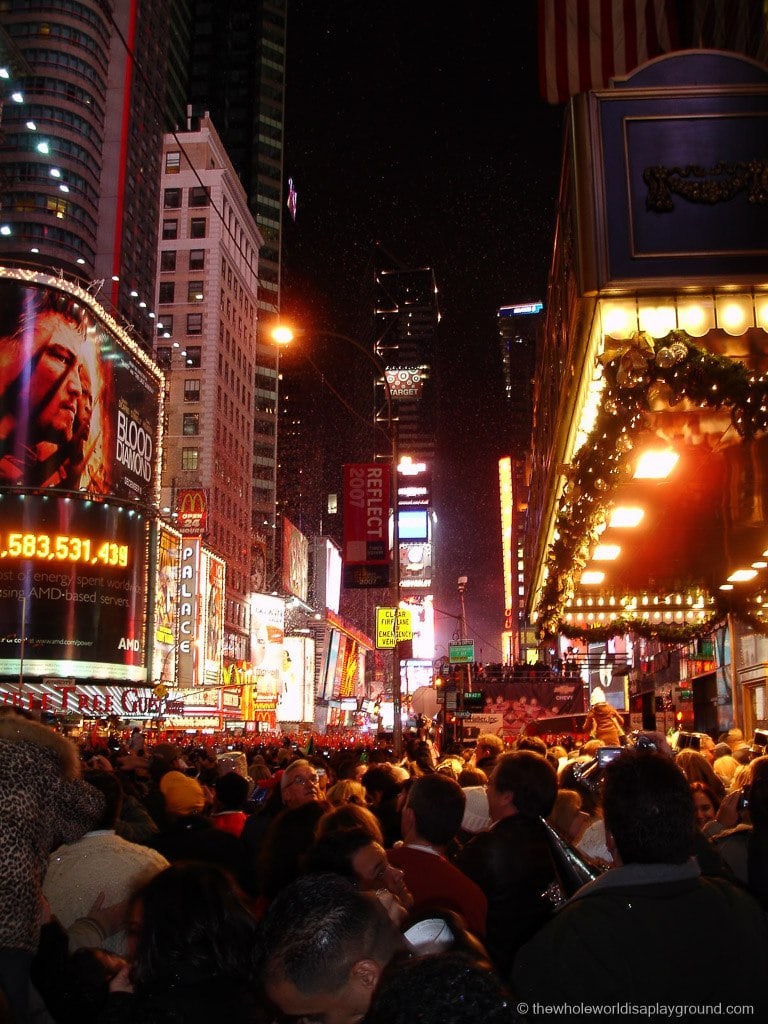