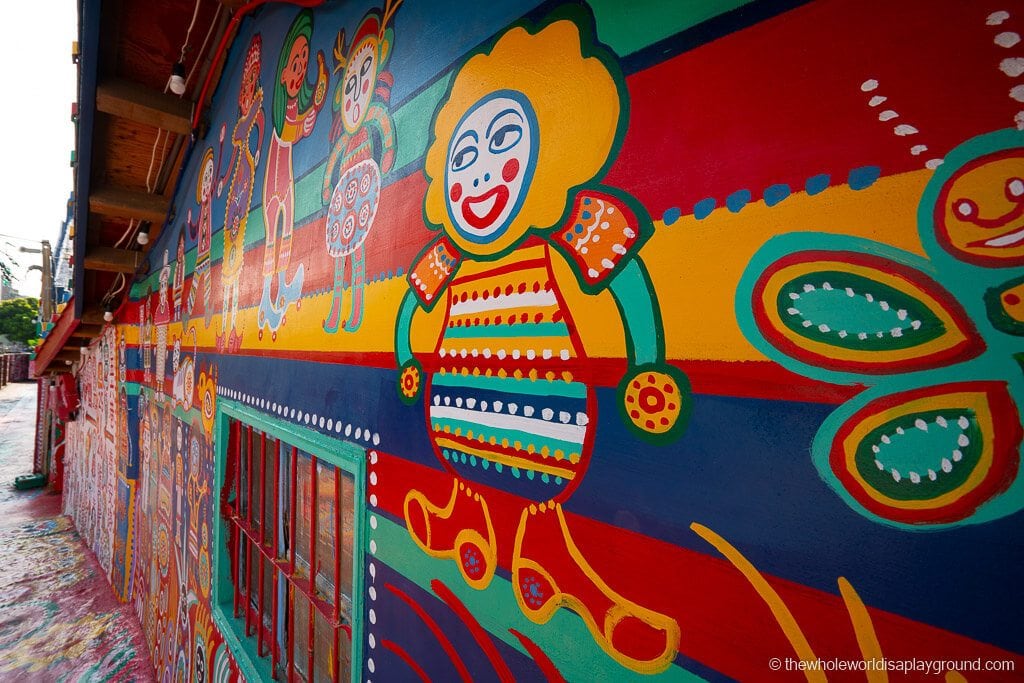 Rainbow Village is a tiny settlement in the Nantun District of Taichung which is famous for its vibrantly painted houses and streets. The quirky village is one of the most colorful spots in Taiwan and is a really fun place to visit.

Created by ‘Grandpa’ in the quest to save his village from demolition, the inspiring story behind the creation of Rainbow Village is as uplifting as walking through the tiny village so full of colour. We wanted to share all the details from our visit including how to get to Rainbow Village and our chance meeting with Grandpa!

The inspiring story behind Rainbow Village is as uplifting as its colourful streets. Originally named Caihongjuan Village, it was a low cost village built for veteran soldiers in the city. 1,200 houses were built in the village and, as time passed, the area became more desirable. Developers wanted to buy the properties and demolish the village but one of the residents, Mr Huang, did not want to leave his home.

He began painting his house with images of comic characters and animals in vibrant colours in protest and his neighbours requested he paint their homes as well. The story of Grandpa trying to save his settlement gained traction and the remainder of the village was saved. Just 11 of the original houses remain and the settlement is now known as Rainbow Village.

Mr Huang, or Grandpa as he is known, is the man behind Rainbow Village. Mr Huang fought in the Republic of China army and fled to Taiwan in the 1940s when he was housed in the village. Now aged 96, he still resides in the village today and continues with his painting. Grandpa often makes an appearance in the village shop and presents visitors with copies of his artwork.

We were fortunate to meet Grandpa during our morning visit and it was lovely to meet him in person!

How to get to Rainbow Village

Rainbow Village can be visited while in Taichung, or as a day trip from Taipei.

How to get to Rainbow Village from Taipei

The most popular way to travel between Taichung and Taipei is by the Taipei High-Speed Rail (THSR). The journey takes around 40 minutes from any of the major stations in Taipei (Taipei Main Station, Banqiao and Nangang station).

How to visit Rainbow Village tip: make sure to check the timetable and take the quickest train with a 40 minute journey time. Some of the trains make stops and can take up to 2hours.

The trains are super-fast and frequent. You can book your tickets in advance at discounted prices on the Klook app – check prices now!

After disembarking the train, Rainbow Village can be easily reached by taxi/Uber, walking or bus from the Taichung High-Speed Railway Station:

We rented a car and drove through Taiwan which we have detailed in our Taiwan itinerary. We drove from Taipei to Taichung and visited Rainbow Village by car during our stay in Taichung. Parking is available at the entrance to the village. Navigating Taiwan by rental car is relatively easy and we highly recommend renting a car if you are comfortable driving.  We rented our car through RentalCars.com and secured a great price on an Avis rental – check rental car prices here!

Taiwan itinerary tip: An International Driving Permit is mandatory when renting a car in Taiwan so make sure to get an IDP in your home country before departure if you are planning on driving a rental car.

How to get to Rainbow Village from Taichung

Rainbow Village is easily accessible from Central Taichung by taxi or bus:

Rainbow Village is open daily from 8am to 6pm at the time of writing.

How much does Rainbow Village cost?

Rainbow Village is one of the quirkiest things to in Taichung and we loved the colourful village. Some tips for visiting Rainbow Village:

Rainbow Village is a tiny settlement of 11 houses so it won’t take long to see everything. We spent about an hour wandering through the village, admiring the colourful paintings and taking photos.

Visit early in the morning

If you want to capture the best photos (Rainbow Village is hugely popular with Instagrammers!) aim to arrive for opening. The village gets very crowded when a tour bus arrives. When we visited, the first tour arrived about 30 minutes after opening.

Visit on the weekday

Visit on a weekday or early in the day if you can. Rainbow Village tends to get crowded on weekends and in the afternoon. It also gets really hot in the village on sunny days so we were glad to escape early!

Keep a lookout for Grandpa and meet him if he’s around the village!

Light snacks and drinks are sold in the village. If you like coffee, make sure to buy one: it comes in an awesome Rainbow Village cup!

Souvenirs, such as umbrellas and prints, are sold in the village shop. We picked up some awesome stickers for our travel journal.

2 thoughts on “How to visit Rainbow Village in Taichung, Taiwan”