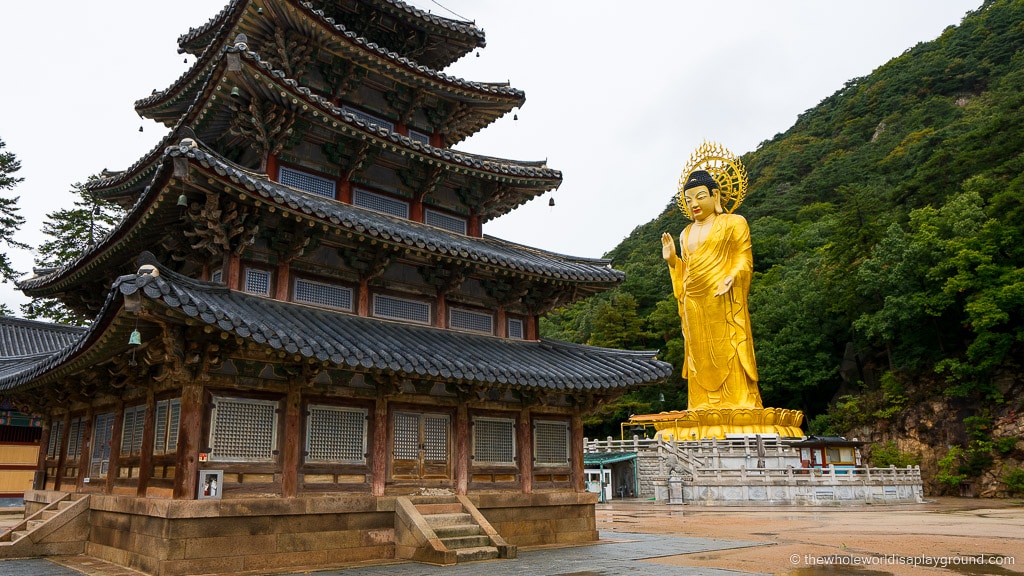 Renting a Car in South Korea

The best and easiest way to explore South Korea is by car. Once you leave the major cities like Seoul, having a car is a huge advantage and allows you to easily visit some incredible places which are not easily accessible via public transport. Our rental car allowed us to visit Korea gems such as the Hahoe Folk Village, the stunning mountain temples of Haeinsa and many other hidden treasures dotted around the country.

Renting a car also saved us money as we were able to fly to Jeju Island from Busan rather than Seoul and the fares were cheaper. If you are planning a trip to Jeju check out our tips for renting a car on Jeju. Having a car also meant we could also save money on hotels by staying just outside towns and cities as we toured the country.

Similar to most countries, it’s worth booking your rental car well in advance for South Korea.

We recommend using RentalCars.com to reserve your car. We’ve always found them to have a great selection of cars and very competitive prices. You’ll be doing a lot of driving in South Korea so we recommend choosing a larger, more comfortable car if possible.

We’re huge fans of road trips and have driven rental cars in almost 50 countries so we have a lot of experience renting cars in foreign countries – check prices now!

One-way rentals are very expensive and quite difficult to arrange in South Korea. We opted to pick up and return in Seoul, parking our rental car in Busan Airport airport during the time we were on Jeju Island. Although we had to drive an extra distance to return the car to Seoul, the cost-saving on the car rental was significant.

Renting a car in Jeju: We rented a separate car in Jeju as taking the car ferry is prohibitively expensive and very time-consuming.

3 | Use public transport in Seoul

We spent a week exploring Seoul before picking up our rental car and heading south to explore the rest of the country. There are a number of pickup depots in the city and we found the rates cheaper than the airport as it avoids additional charges such as airport pickup charges.

Car parking is limited and expensive in Seoul so we wanted to avoid parking there for an extended period of time. In addition, traffic in Seoul (especially at peak times) is horrendous, so try to avoid it.

Renting a car in South Korea tip: we kept our rental car for a few days on our return to Seoul before leaving South Korea but rarely used it. Instead we preferred to walk or use public transport.

4 | Drive on the right-hand side of the road

South Koreans drive on the right-hand side of the road, similar to the US and Europe.

You will need an International Drivers Permit (IDP) in order to rent a car in South Korea. Not all agencies make this clear when you book your car, however this is mandatory and you will need to get one from your home country that issues your licence before you travel. It is usually required when you pick up the rental car so don’t forget it!

An IDP is actually a very simple document: it is really only a translation of the origin country licence into a standardized format with multiple translations.

We recommend purchasing a SIM card with data when you arrive in South Korea. We always find having mobile data invaluable and extremely useful for navigating in the rental car. It also meant that we could research places to visit when we were on the road.

We used the KT Olleh sim card and picked it up at the airport on arrival in Seoul. It’s cheaper if you order in advance with Klook – click here to order now!

If you have more than one device and don’t want to get separate sim cards you should consider renting a 4G Wifi portable hotspot. They’re great if you need to connect more than just your phone while on the go – click here to order now!

We weren’t really sure what to expect before driving in South Korea but we found driving there extremely safe. The roads are of excellent quality, the high number of speed cameras means there is almost no speeding and, aside from the traffic in the cities, drivers are pretty relaxed.

We didn’t encounter any problems during our time on the South Korean mainland or in Jeju.

Google Maps doesn’t work in South Korea so you’ll need to use an alternative like Maps.me, Waze or Naver maps.

Most rental cars have really good sat nav built-in and you just need to ask the rental car staff to change the language to English. Trust us on the asking, trying to change your car language from Korean to English takes around 25 minutes!

Tips for renting a car in South Korea: We rented a Hyundai i40 and it had one of the best sat nav systems we’ve ever used. It was pretty hard to take a wrong turn with it, even at very complicated junctions!

When you plan to rent a car in South Korea make sure to allow a budget for parking costs. Free parking is pretty much non-existent in Seoul and the other major cities like Busan or Daegu.

Try to book hotels that have parking included, or at least discounted, in the room rate.

There are plenty of multi-storey car parks in South Korea’s cities and there is usually a good selection of paid on-street parking. Make sure to but parking tickets as there are lots of car park inspectors roaming the streets.

Renting a car in South Korea tip: One really useful accessory most cars in South Korea have are small, bright-coloured (usually blue) pieces of foam on the outer rim of all car doors. The purpose of the foam is to avoid damaging other cars when you open your car door in the typically small car spaces.

As you’ll likely pick up your car from Incheon Airport or Seoul city you’ll be introduced to the traffic in South Korea cities pretty quickly!

Outside of peak hours, the traffic is manageable. However in peak traffic, the congestion in Seoul is some of the worst we’ve encountered so try to minimize hitting any of the cities during morning or evening rush-hours

While travelling outside the cities the road system in South Korea is world-class, with the majority of roads being toll roads.

All expressway roads linking the cities are tolled.

It’s likely that you won’t get a toll tag to use on the expressways. Instead, you’ll need to pay cash or card at each toll. Toll tag users can use the blue lanes marked as Hi-Pass lanes. However in a rental car you need to avoid the Hi-Pass lanes at all costs as you won’t be able to pay the toll.

Some of the tolls are a fixed price while others will be pay per distance, i.e. you will take a ticket at a booth when you enter the toll road and pay when you exit.

As always, adhere to the speed limits. We’ve driven in over 50 countries and there were more speed cameras in South Korea than any other country we’ve visited! They can be fixed or average speed cameras and feature frequently. We recommend learning how to use the rental car cruise control and making use of it everywhere!

Renting a car in South Korea tip: The on-board car sat navs ( we had a Hyundai i40) have accurate speed limits so once you pay attention to your sat nav and adjust the cruise control you’ll be fine. There are also lots of speed signs indicating when the speeds change.

There were lots of fuel stations in South Korea. Fuel is quite cheap and credit cards were accepted at all fuel stations where we filled up. Most station attendants put the fuel in the car which is super useful!

Most cars in South Korea are automatic which means driving is very easy. Our rental was a basic saloon and had lots of extra features extras like reversing cameras,  electric seats, and an amazing sat nav built-in.

A South Korean car rental likely won’t come with a spare wheel. However, there are lots of garages so getting a puncture fixed shouldn’t be an issue. Make sure to have the emergency contact number of your car rental company in case you need assistance.

The main destinations and road signs are in English and Korean and exits are numbered similar to the USA.