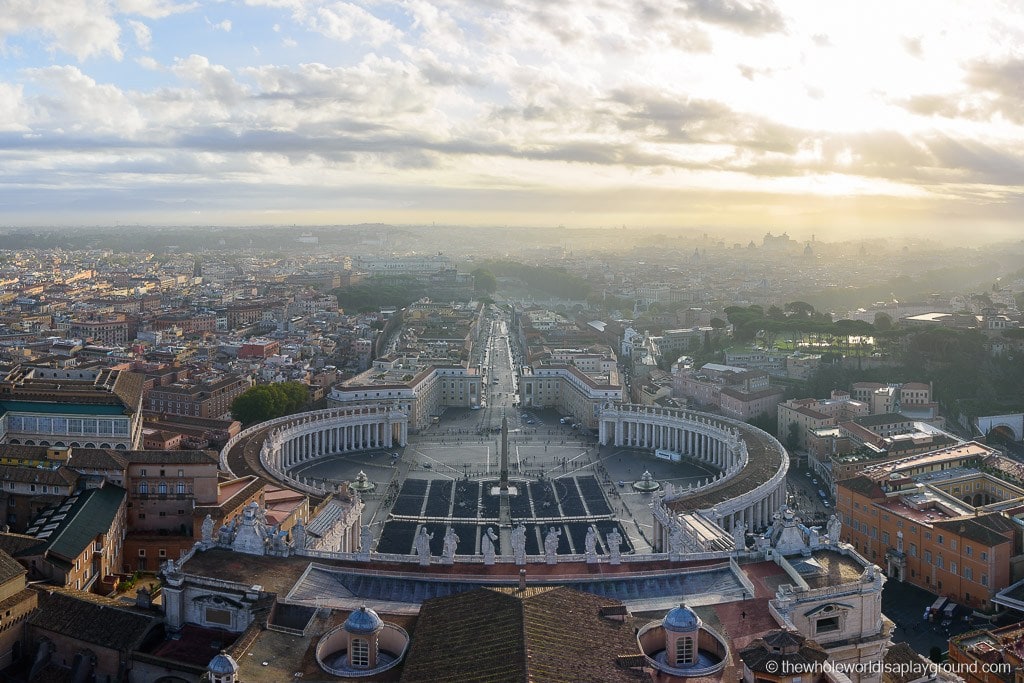 Rome is full to the brim of secret sights and surprises and we made it our mission to find the best of its hidden gems! Here’s our guide to 10 of the best and unique things to see in Rome!

From the truly amazing views of Aventine Hill to the spiral staircase in the Vatican, Rome is packed with secret and unique things to see. We’ve put together some of the best that we’ve found from our many trips to Rome.

1 |  Peek through the keyhole on Aventine Hill

Imagine standing in one country, looking through a keyhole across another and into a third. That’s exactly what you can do at the Knight of Malta gate on Aventine Hill in Rome where a tiny, nondescript keyhole adorns a green wooden door at the top of hill. The secret is that the keyhole lines up directly with the beautiful, tree-lined priory garden and centres on St. Peters Basilica in the Vatican. It’s hard to imagine that the view was a beautiful accident when building the doorway and gardens but either way it’s one of the most unusual and stunning viewpoints we’ve ever seen.

Where to Stay in Rome

Rome centre is a relatively compact city and we highly recommend staying in the city centre. It’s easy to walk to everything, especially when the crowds are less in the mornings and evenings. Our favourite Rome hotels are:

25,000 visitors make the trip to see the Vatican every day but few are aware of it’s most spectacular hidden gem. It’s possible to climb to the very top of the Copula, otherwise known as St Peter’s Dome, and be rewarded with sweeping views across Rome and the Vatican. It’s a breathtaking (literally!) 551 steps to along narrow sloping walkways and spiral steps to reach the top although it is possible to take an elevator and pass the first 200 of them!

There is a guided tour available that includes the climb to the dome of the copula. The tickets are worthwhile as you will also get access to the crypts, Michelangelo’s Pietà or the Bascilica without any lines – check prices now!

Let’s face it, most Rome Churches are spectacular but St Mary’s has a quirky addition that makes it stand out – a sundial was built along the Meridian Line crossing Rome and everyday between 11:54 am to 12:14 am the sun shines through a small gap in the ceiling and casts its light on the line. Don’t forget to look up: holes in the ceiling trace the passage of the stars!

4 | Discover ancient Egypt at the Pyramid of Cestius

A 2,000-year-old ancient pyramid is the last thing we expect to stumble across in Rome but, alas, we hadn’t taken a wrong turn to Egypt! Built between 12 and 18 BC the 120 foot pyramid was constructed as a tomb for a wealthy Roman with an Egyptian fascination. Standing at the meeting point of two ancient Roman roads the towering pyramid is in stark contrast to its surroundings!

The legendary 17th Century Italian artist and one of the fathers of Modern painting, Caravaggio had a checkered lifetime which included the murder of a man in a bar brawl. His genius overshadows his tumultuous history and some of his finest works are on display at the Church of San Luigi dei Francesi where a trio of incredible paintings surround the altar: The Calling of St Matthew, The Inspiration of St Matthew and the Martyrdom of St Matthew. It’s incredible to see the masterpieces in their natural habitat and the church has free entry.

6 | Test your honesty at La Bocca della Verità, the Mouth of Truth

Mind you hands at the Mouth of Truth! The first century marble face is thought to be from a fountain or a manhole cover. Legend has it that if one tells a lie with their hand in its mouth then it will be bitten off.

7 | Be mesmerised by the spiral staircase in the Vatican Museum

The enchanting spiral staircase in the Vatican museum is guaranteed to hold your gaze and have you reaching for your camera to capture its perfection. It’s made up of two staircases: an upward and a downward staircase in a double helix and they combine to create a mesmerising effect.

The Vatican museum can get insanely busy at peak times so we recommend reserving a fast-track ticket before you go. We recommend the skip-the-line ticket as you’ll get into the museum more quickly and avoid the crazy long general queue – check prices now!

If you’re looking for a last minute ticket (we’ve all been there), then don’t worry. There is an optional last-minute ticket (it’s a little more expensive but worth it) that will get you priority access to the Vatican Museums and the Sistine Chapel. These tickets are definitely worth it as the general queues into the Vatican Museums are some of the longest in Rome – check prices now!

8 | Pass through the Holy Door at the Basilica

Every 25 years a hidden Basilica door sealed with bricks is struck three times with a silver hammer and opened by the Pope. The towering door is a stunning construction depicting scenes from the Bible and, as a mark of the Jubilee year, the door will remain open until November 20th 2016 and will be then be resealed.

9 | Watch a beautiful sunset over the Rome rooftops

Like many cities Rome is best appreciated from the sky and the many rooftop bars and restaurants are hidden gems with incredible skyline views. Our favourite is the Le Cupole Bar at the Grand Hotel De La MInerve overlooking the Pantheon. Sip a cocktail while watching the sunset for a perfect evening in Rome.

10 | Feel the magic at Porta Alchemica

A magic door stands among the ruins of Villa Palombara on Esquiline Hill where Roman Alchemist Massimilano Palombara lived in the early 1600s. Intriguing inscriptions decorate the door: ‘three are the wonders: God and man, mother and virgin, the one and three’ and ‘the dragon of the Hesperides watches over the entrance of the magic garden, and without Hercules Jason would have not tasted the pleasures of Colchis’. Legend has it that if the inscriptions are recited in the correct order the person will pass through the door to another dimension!

Check out our list of the best photo locations in Rome here.

2 thoughts on “10 Rome Secret Sights: Hidden Gems You Must Visit”