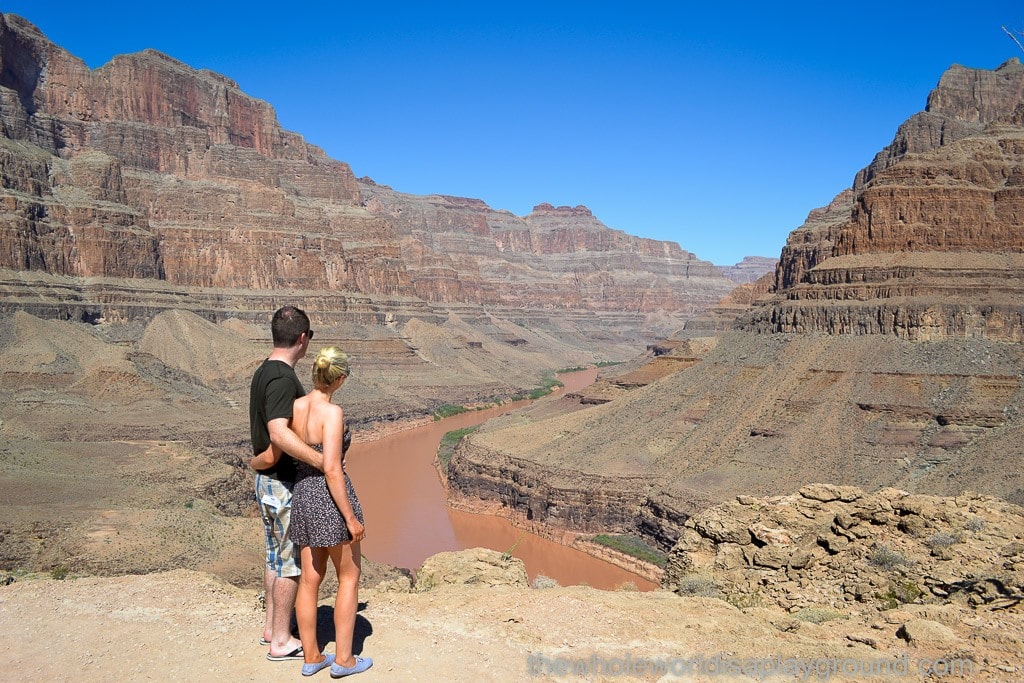 The prospect of a trip to the spectacular Grand Canyon resulted in extremely high excitement levels in thewholeworldisaplayground hotel room! So much so we were up and at it at the crack of dawn, no mean feat during a stay in the hard partying Las Vegas strip! 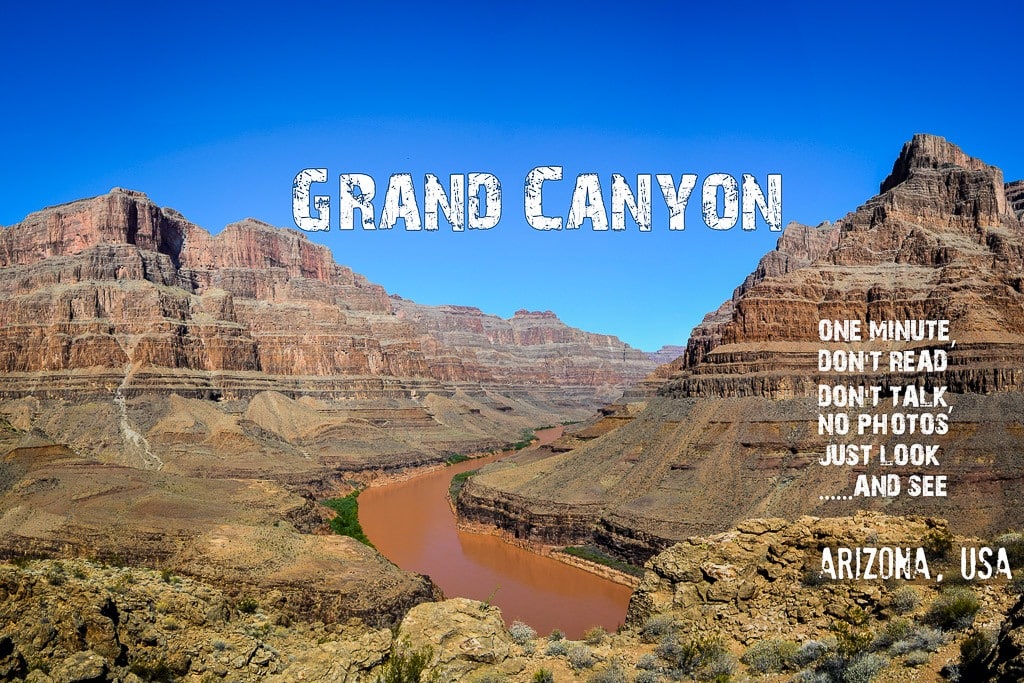 The morning started off fabulously with the arrival of a stretch limo to take us to McCarran airport for our helicopter ride to the Canyon. We opted for a Grand Canyon picnic tour with a 45 minute scenic flight over Lake Mead, Hoover Dam and the Colorado River before descending 3,200 feet and landing in the Canyon.

A limo. A helicopter. A natural wonder of the world. It was shaping up to be a good day! 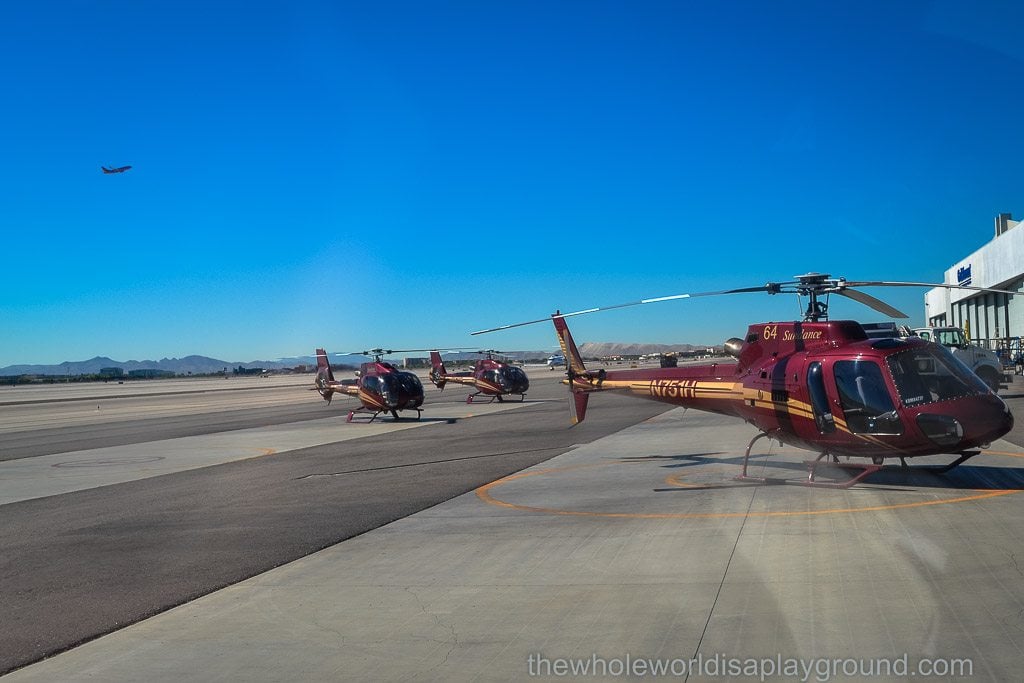 Having checked in, watched the safety demonstration and been weighed (yes, weighed. Something to look forward to after a few all you can eat Vegas buffets!) we were ready to board our helicopter and take to the skies!

The helicopter holds 6 passengers and we were seated depending on our weights. I got extremely lucky and scored a front row spot next to the pilot. The best views are up front, followed by the window seats at the back but it really is luck of the draw based on the weight distribution of the group. 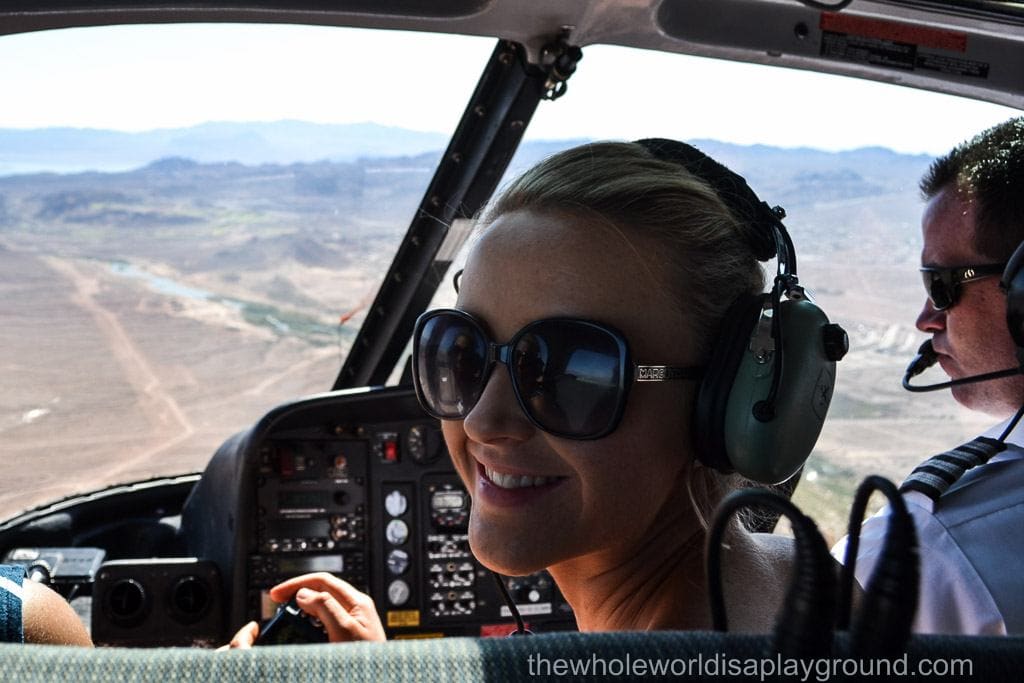 We took off over the strip and the pilot gave us a running commentary on the Nevada countryside.

It was amazing to see the sparkling blue waters of Lake Mead in the middle of the desert terrain. The massive lake is at the junction of the Mojave, Great Basin and Sonoran deserts and was formed when the Hoover Dam was constructed. 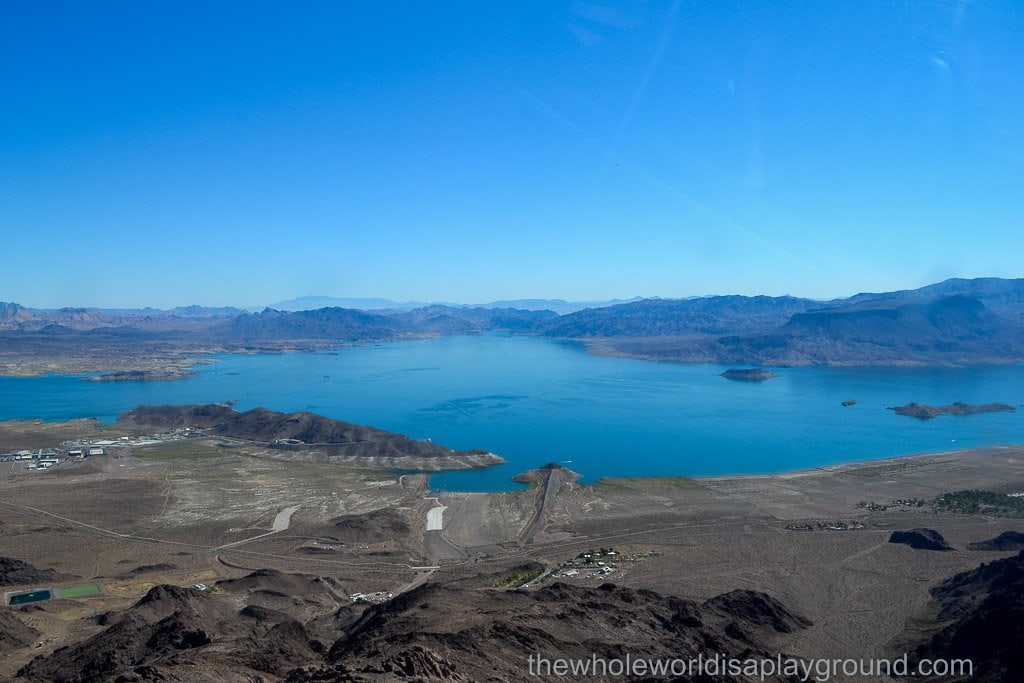 Next up was the magnificent concrete arch of the Hoover Dam which, at its time of construction in 1935, was the largest dam in the world and considered an engineering marvel. It was incredible to think of the monumental task the workers undertook to complete the dam and its role in supplying water to millions of homes.

It’s hard to convey just how big the Hoover Dam really is but the fact that it is the same height as a 60 storey building should give a good indication.

The Hoover Dam also marks the border of Arizona and Nevada and my inner geek rejoiced at the prospect of crossing a state line! Two states in one day? Bonus! 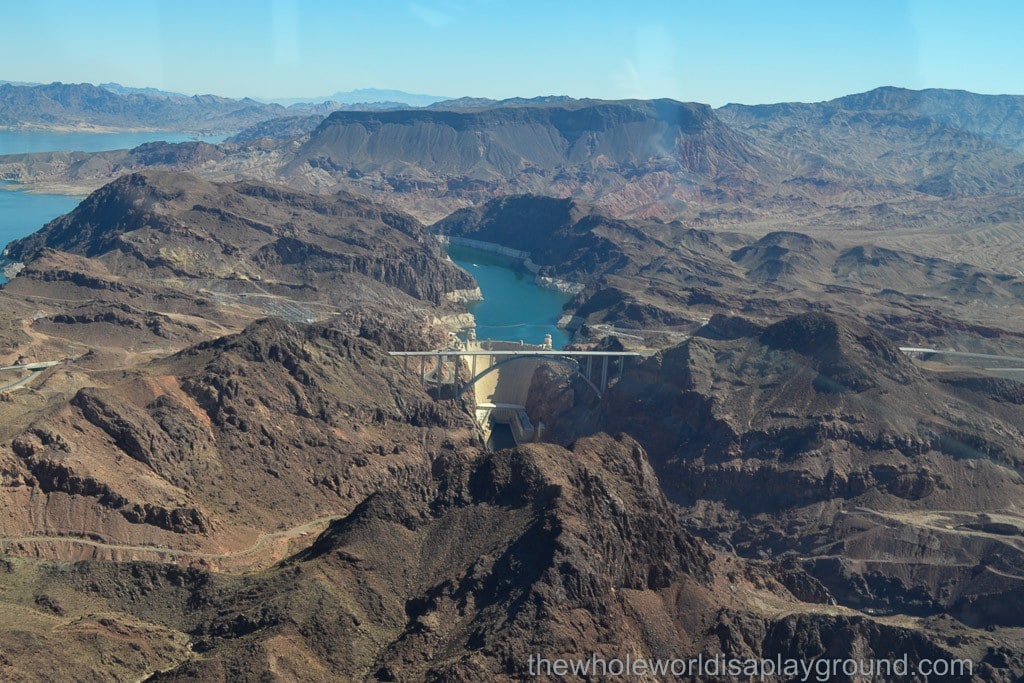 As the Grand Canyon came into sight it seemed strangely familiar yet much more magnificent than a picture can ever portray.

I was struck by sheer size and the millions of years of history right in front of me. Some parts of the canyon are thought to have been carved by the Colorado River up to 70 million years ago (this travelling is definitely good for making me feel young!). The vivid colours of each layer were remarkable in the morning sun.

It was at this point it became evident the Grand Canyon is so much more than just the massive hole in the ground I had thought I was going to see! I was most definitely awe-struck! 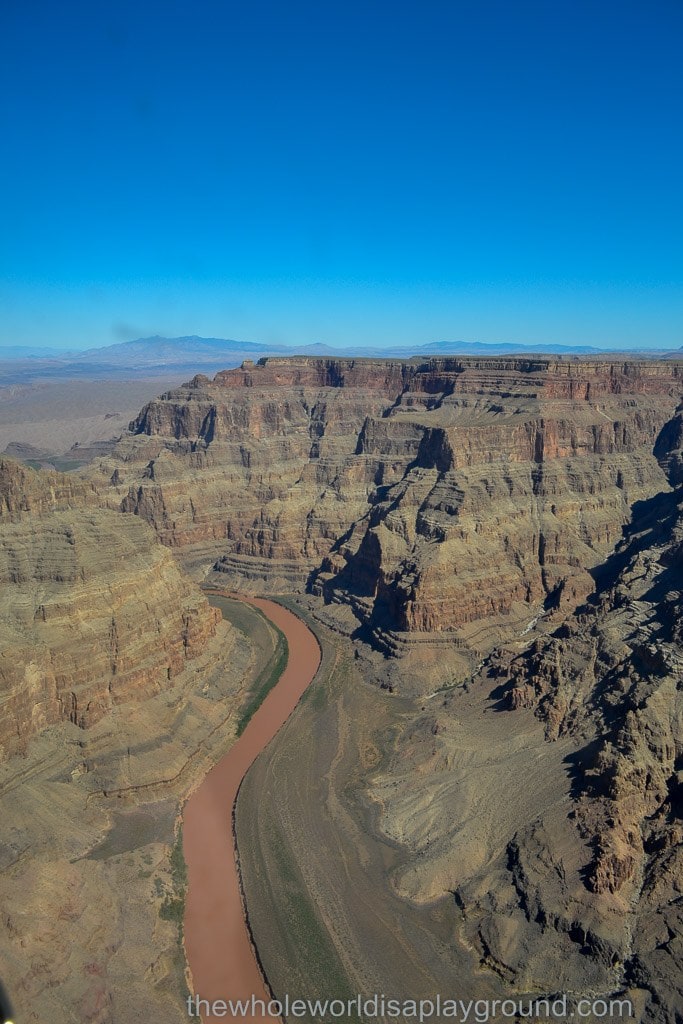 The flight into the Canyon was spectacular as the helicopter soared between the Canyon Walls to the very fitting sounds of Wagner’s Ride of the Valkyries (think Apocalypse Now!). Entering the canyon was the absolute highlight of the day.

It’s all very dramatic and the bird’s eye view presents a perfect opportunity to experience the massive scale of the Grand Canyon and the Colorado River. I felt like we were in a movie scene! 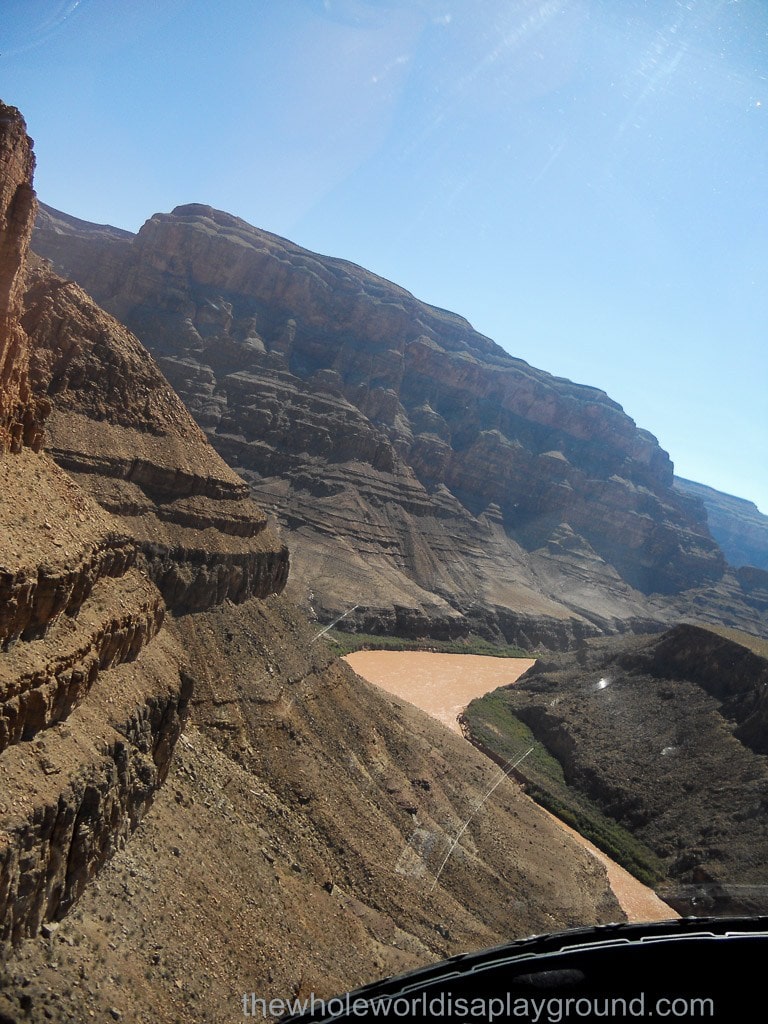 While we wandered around appreciating the spectacular views our pilot set up our picnic lunch and we enjoyed sandwiches, pasta, cake and fruit accompanied by a champagne toast. It was so idyllic and incredible to think we were sitting at the bottom of the Grand Canyon overlooking the Colorado river and surrounded by millions of years of history. 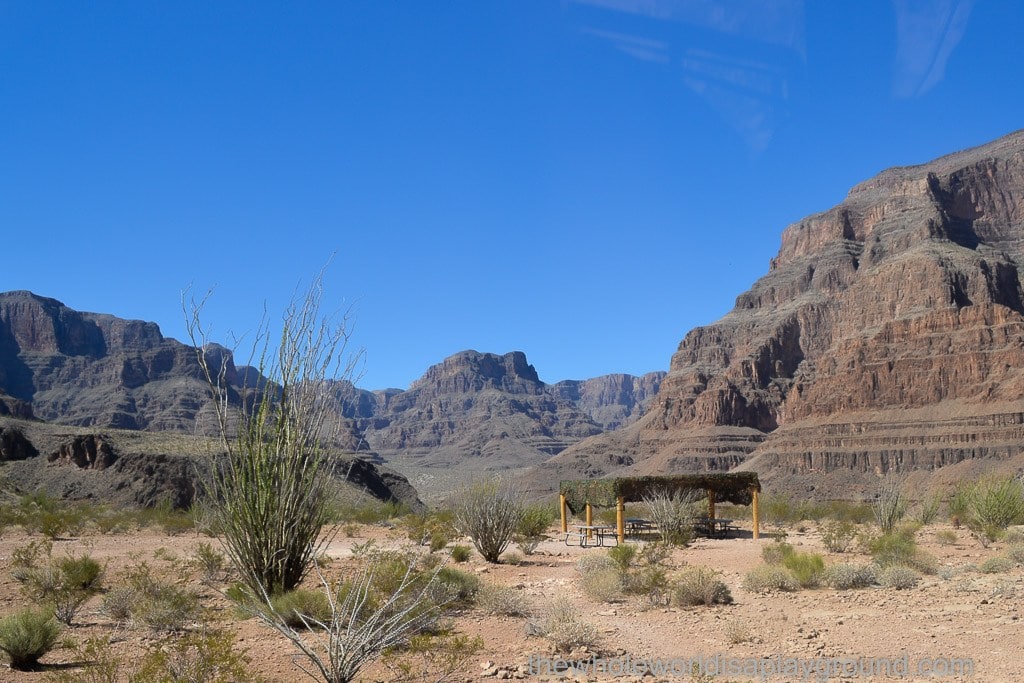 Having spent some time marvelling at the magnificence of the Grand Canyon (and snapping a million or so pictures!) we boarded the helicopter for the flight back to Las Vegas. The views of the river, the desert and the canyons along the way are spectacular and it was wonderful to sit back and enjoy them.

It’s not just the Grand Canyon that’s best viewed from above. The trip finished with a fly by over the Las Vegas Strip, an attraction in its own right. We caught a glimpse of all the landmark Vegas hotels including New York, New York, MGM Grand and the Luxor Pyramid. 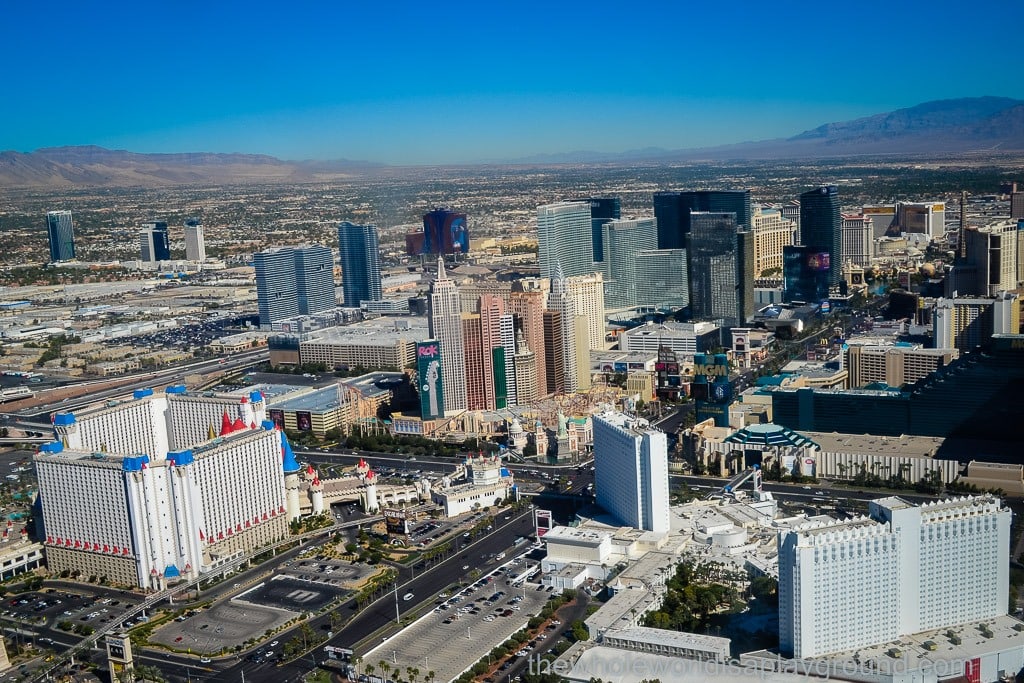 The Strip looked awesome from the helicopter and, like everything in Vegas, is larger than life! 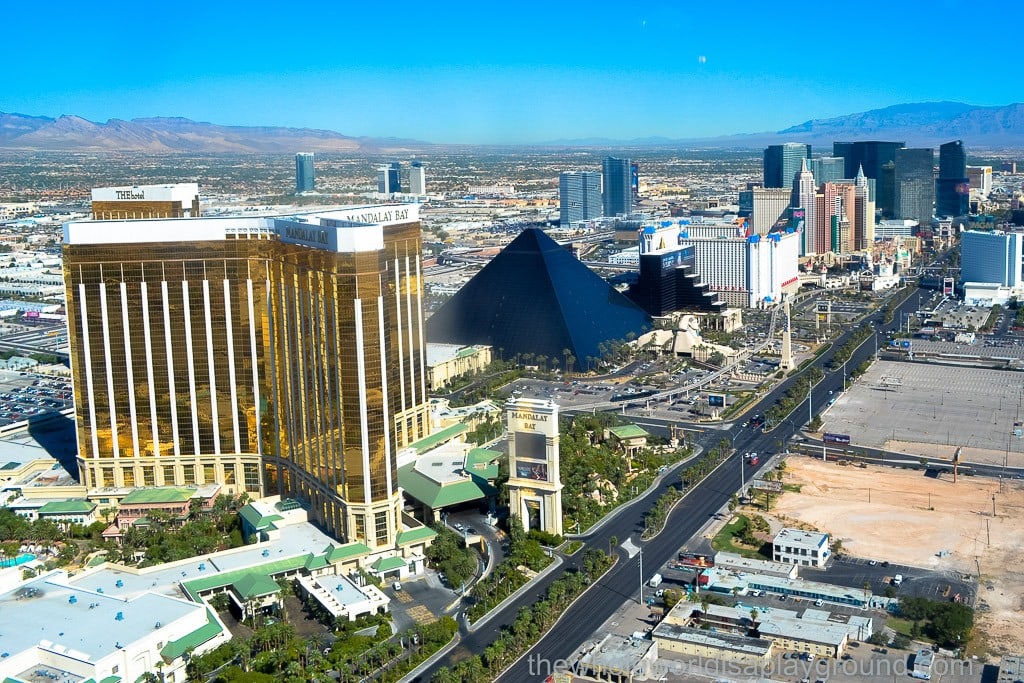 The trip ended with one last treat as we headed back to our hotel in a limo from the airport and we were lounging at the pool with a cocktail before the afternoon was out. Not a bad morning’s work!

Guide to the Grand Canyon from Las Vegas:

The Grand Canyon has 3 rims which are hundreds of miles apart.

Why a helicopter tour?

We chose a helicopter package with limousine transfers departing from McCarran airport for our Grand Canyon tour. Here are our reasons why: 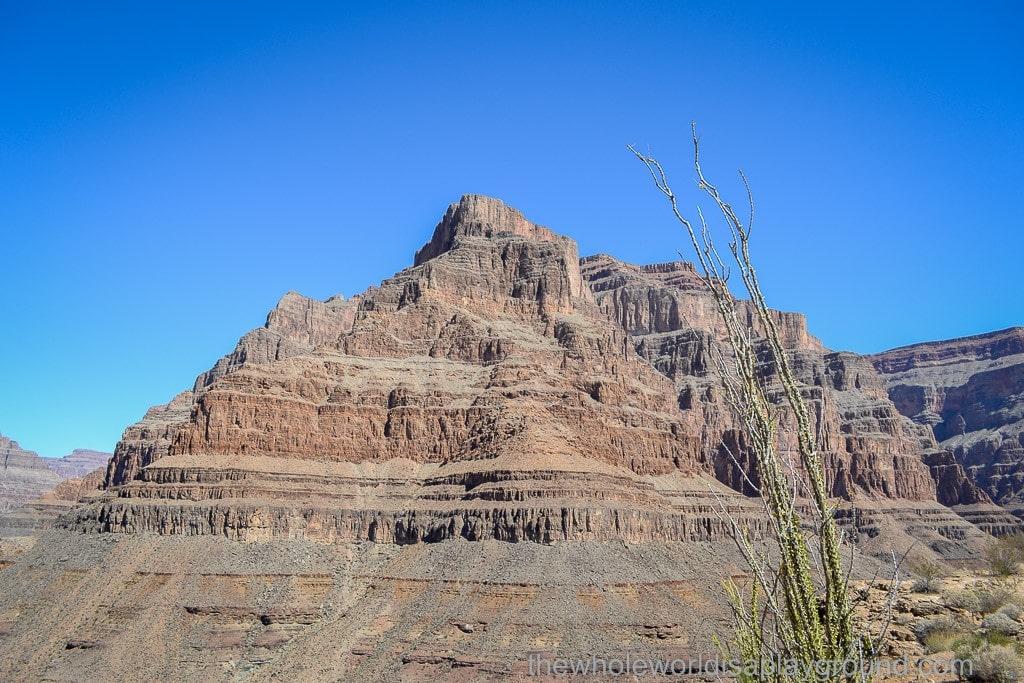 At the Grand Canyon:

And enjoy! The Grand Canyon is an incredible sight to behold and an excellent day trip option from Las Vegas.