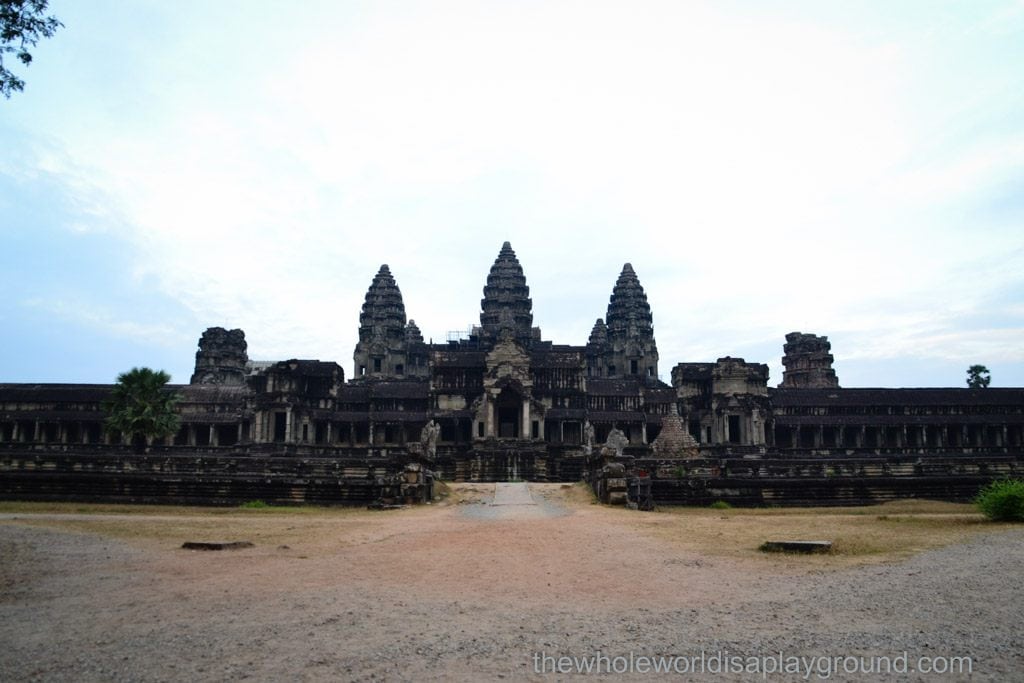 Watching the sunrise at Angkor Wat is an iconic travel experience but it still took three days of gentle persuasion from the husband before I was ready to attempt an early morning jaunt to the temples. Most things that involve a 4am start, a torch and a dark jungle are not cool with me but he persisted and I relented and suddenly there was a tuk tuk driver sitting outside our hotel in the middle of the night. We were ready to roll!

Tuk Tuk to the Temples

The sunrise trip to Angkor Wat is a road well travelled and the journey from Siem Reap to Angkor was filled with a steady stream of travellers all hoping to capture a magnificent sunrise over the temples. For some reason on the sunrise run the tuk tuk drivers morph into racing car drivers jostling for pole position at every turn. I’ve decided they were probably just eager to get back to bed, who can blame them?!

We opted to enter via the quieter East gate entrance and wait there for the big event. I’m not sure what I was expecting, maybe some floodlights to lead the way, but complete darkness and alone on a dust track with only a tiny torch beam came as a massive surprise to me! I was terrified!

We had some time to spare before the main event and I was more than a little unnerved by the strange sounds echoing around us. And the eyes. Little eyes peering out of the bushes and trees. It’s safe to say I spent the majority of the time hopping on one foot and urging the sun to rise very soon!

The temples are out there somewhere. Not scared at all! 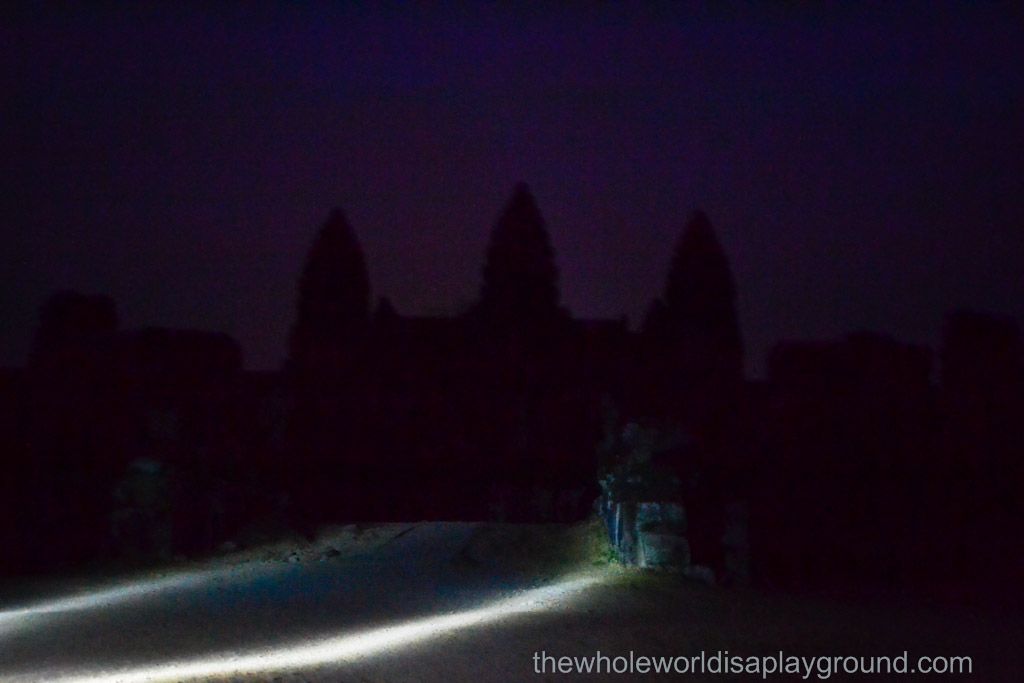 Finally, the sun began to rise and we were treated to some beautiful shades of blues and purples over Angkor Wat as the majestic temples were illuminated on the horizon. We were the only ones on the East Side when dawn broke and it was amazing to have the place to ourselves and watch the sunrise. 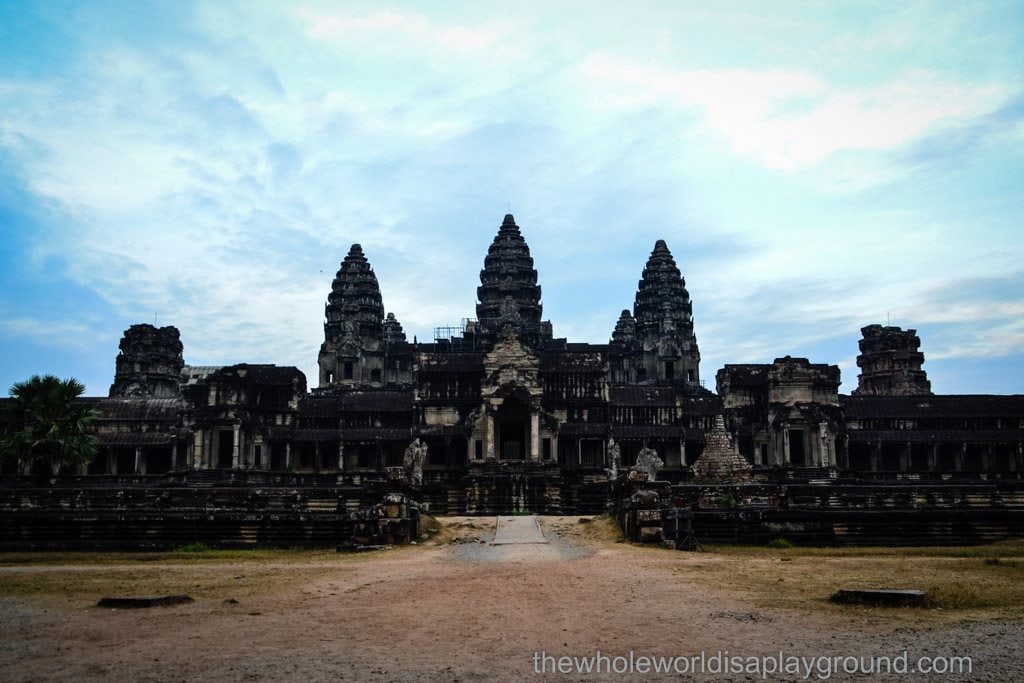 The popular sunrise watching spot is on the West Side of Angkor Wat and, not wanting to miss out on the experience, we decided to take a peek before the sun rose any higher. As we crossed over we were met with a wall of cameras and people congregated around the lotus pond. Despite the fact that it is the world’s largest religious monument it never occurred to me how many people would actually show up for sunrise. 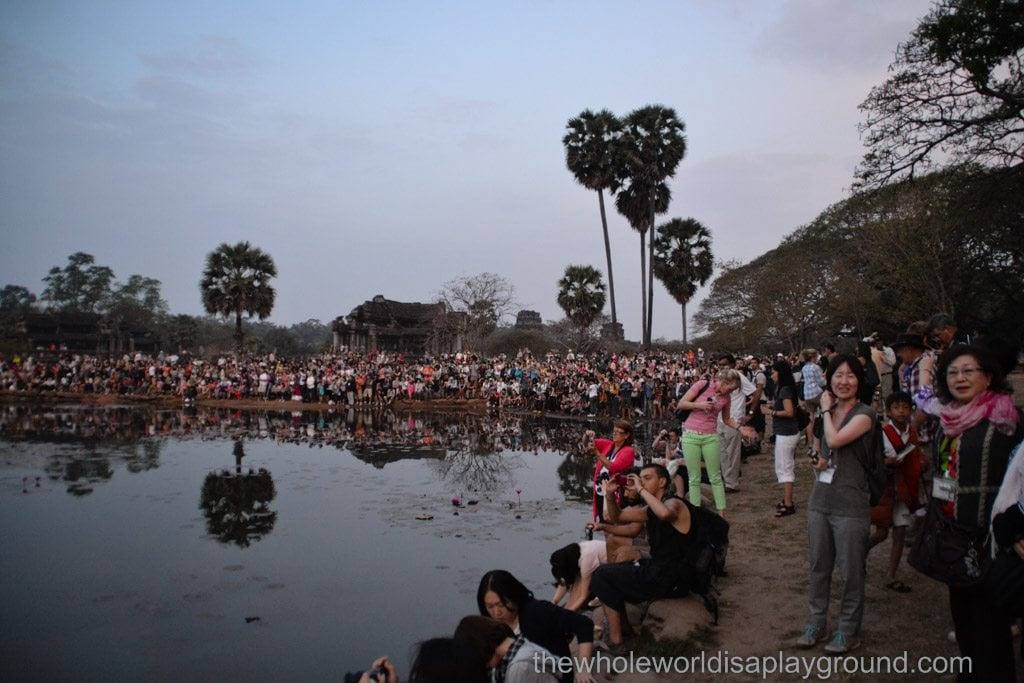 I indulged in a spot of people watching and the husband enjoyed his photography while we waited for the sun to come back into action. As we waited, I developed a slight obsession with the stunning pink lotus flowers on the pond. With the temples illuminated in the morning sunshine and the light reflecting on the lotus pond, we had a lovely ‘wow, we’re watching the sunrise at Angkor Wat’ moment! 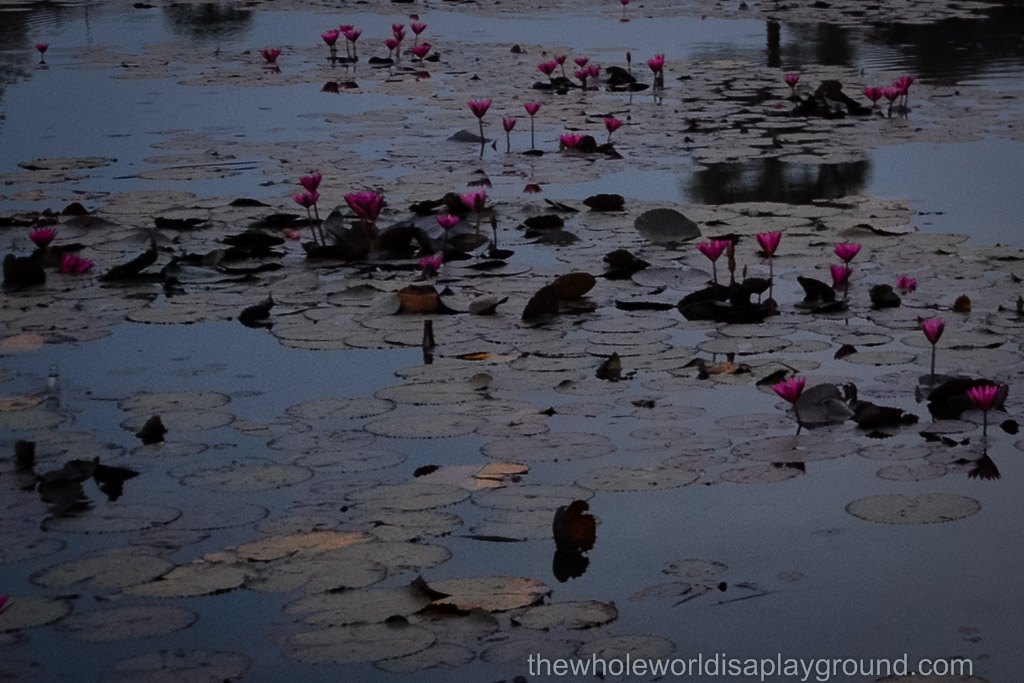 The temples in the morning sun: 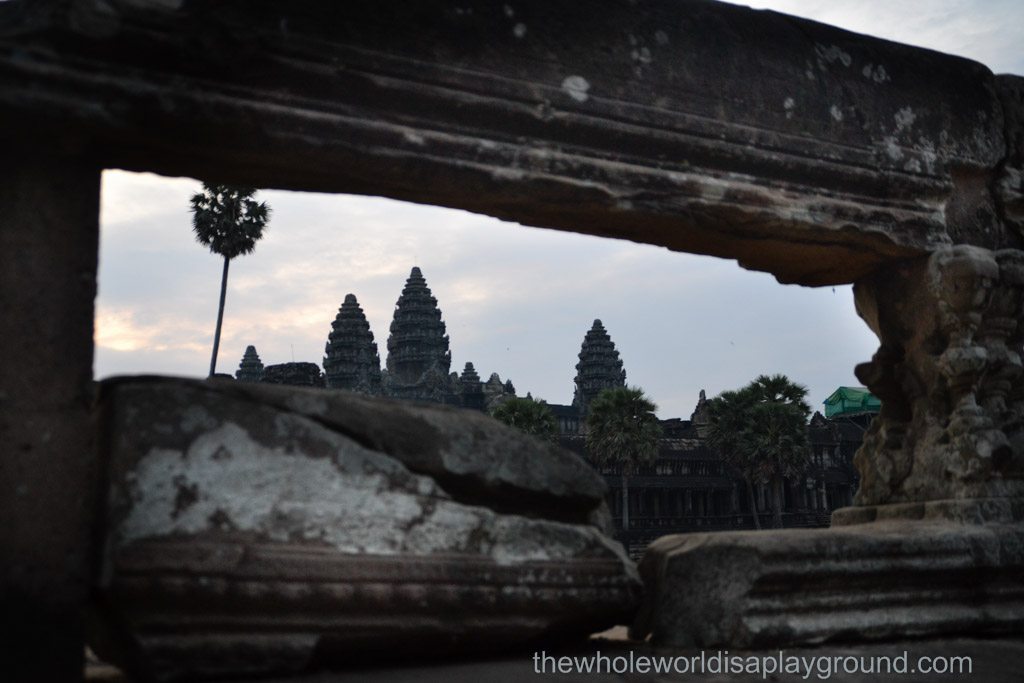 Suddendly,  we were rewarded with a beautiful sky filled with red, purple and crimson hues and the classic Angkor Wat silhouette reflected in the Lotus Pond. This was the moment everyone had been waiting for and there were a lot of collective ooohs and aaahs from the crowd. And camera flashes. A lot of camera flashes! It was absolutely mesmerizing. And the funny thing? The 4am start didn’t seem like such a hardship after all! 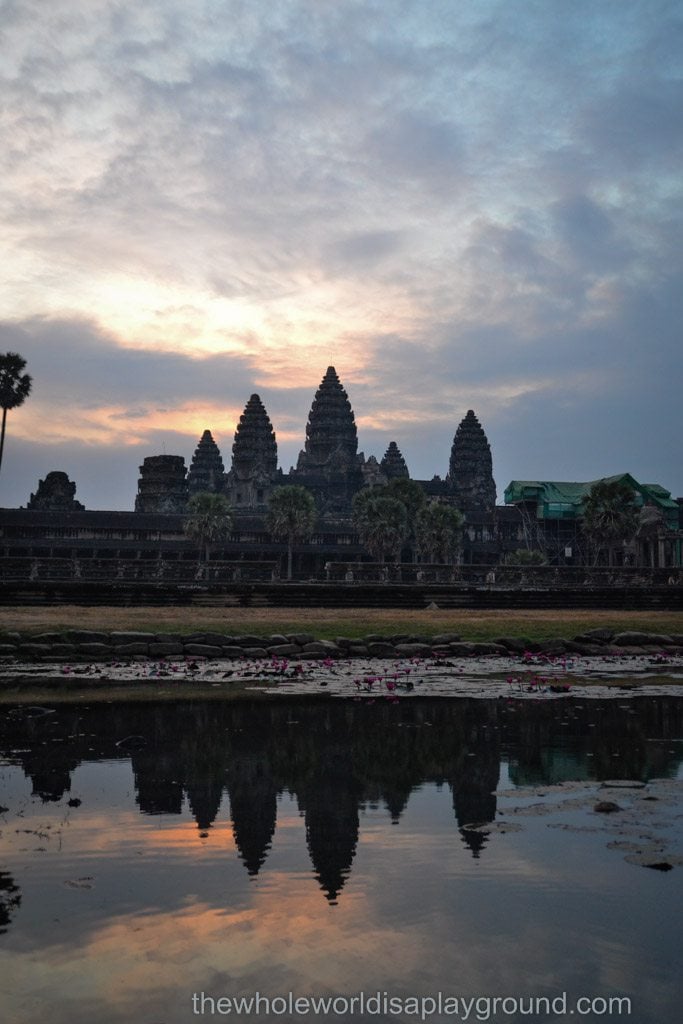 Within moments of the sun rising the massive crowd dispersed and we headed into the inner sanctum of Angkor Wat for a little more temple admiration before calling it a well deserved day and relocating to the pool!

Tickets can only be purchased at the main entrance which is situated on the road to Angkor Wat. If your first visit is for the sunrise leave extra time to pick up a ticket or pick up a pass the evening before. One day passes purchased after 5pm are eligible for use the following day.

Best place to watch the sunrise: The West and East sides are magnificent in their own way. We had the place to ourselves on the East Side and it was wonderful to watch the sunrise away from the massive crowd. The West Side is magnificent and, on a good morning, you’ll be rewarded with the stunning classic silhouette of Angkor Wat and the reflection in the lotus pond which is unbeatable!

For more on Cambodia, check out these Cambodia travel tips to help you plan your trip. 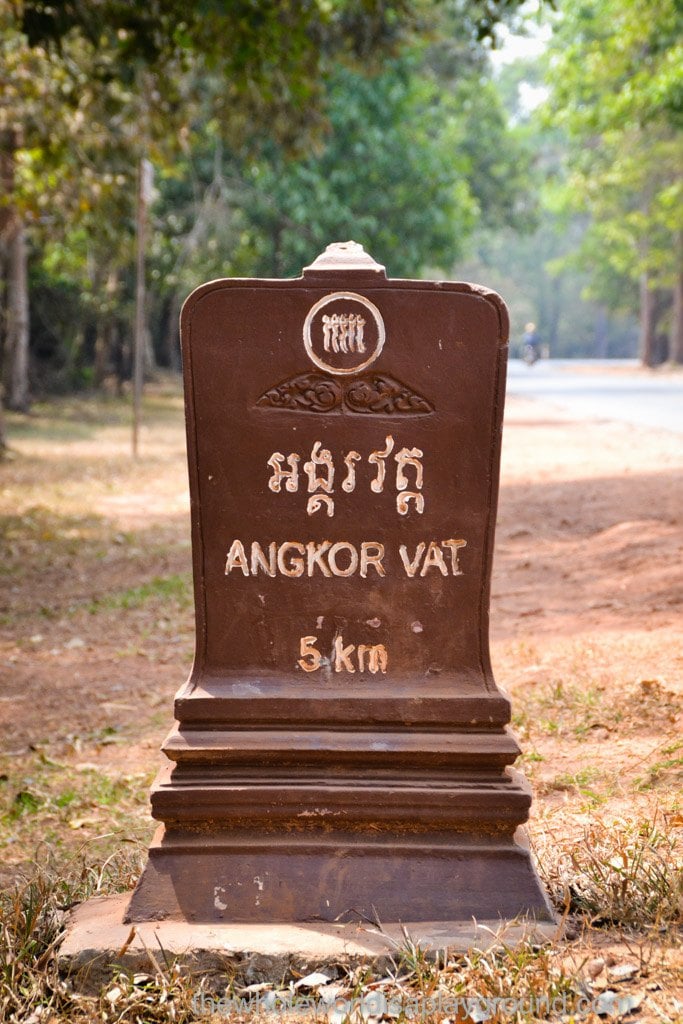 2 thoughts on “Sunrise at Angkor Wat: a 5am jungle visit searching for the temples!”