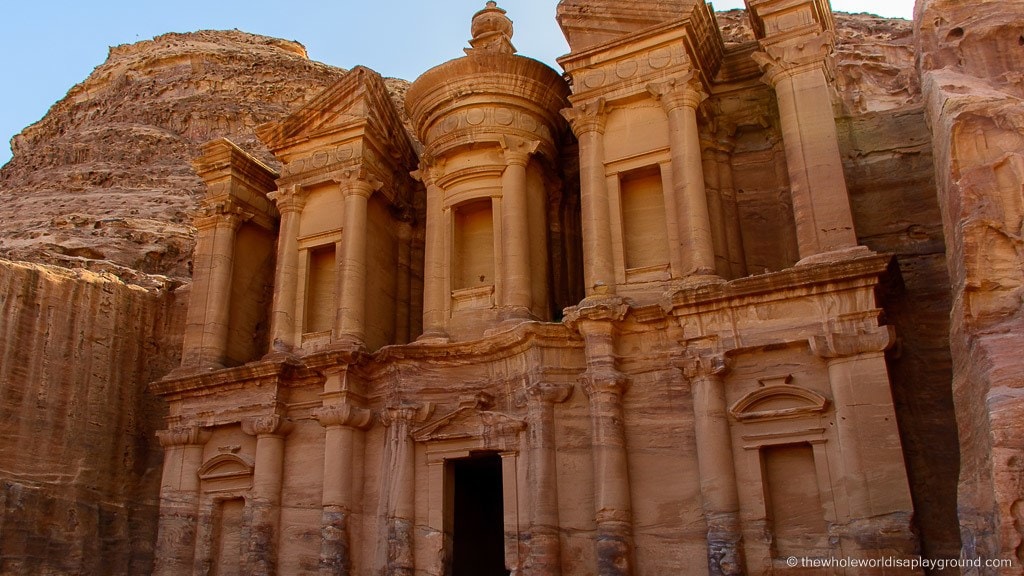 The ancient city of Petra, surrounded by the town of Wadi Musa, was carved into the rock face by the Nabataean civilization and is one of the most incredible sites we’ve ever visited. Home to sites including the iconic Treasury, the Siq and the Monastery there are lots of things to do in Petra as well as the town of Wadi Musa. After exploring Petra as part of our our Jordan itinerary we’ve put together our sightseeing guide to Petra and Wadi Musa: it’s our guide to the best things to see and do in Petra and Wadi Musa. Enjoy!

Located in the south of Jordan, Petra is an ancient city which was carved into the rock face by the Nabataean civilization, a nomadic Bedouin tribe who roamed the Arabian Desert and who established Petra as a major trading hub. It became the capital of the Nabatean around the 6th Century BC but was hit by a major earthquake in the middle of the first century before being abandoned by all but the Bedouin who inhabited the caves and tombs of Petra and a few of whom remain today.

It’s a Jordan icon and the Treasury is an iconic symbol. The city was immortalised in Indiana Jones and the Last Crusade as the lost city in Indiana Jones’ hunt for the holy grail. Petra is a designated UNESCO World Heritage Site and was named one of the New 7 Wonders of the World.

Wadi Musa is the town surrounding Petra and serves the tourists who flock to the ancient city with its array of shops, restaurants and hotels.

Where to stay in Petra

How to get to Petra

The easiest way to get to Petra is by rental car. Renting a car in Jordan is the best way to explore the country plus driving is relatively easy in the country. The roads are very good quality and fuel is cheap. Having your own car gives you the flexibility to travel at your own pace a see places that are simply not possible on group tours or public transport – check out our tips for renting a car in Jordan for more information.

We’re huge fans of road trips and have driven rental cars in almost 50 countries so we have a lot of experience renting cars in foreign countries. Book your car now with RentalCars.com, where you will find the best rental car prices – click here to book now

Things to do in Petra

1 | The Treasury at Petra

Best things to do in Petra tip: If you have time be sure to make the hike to the viewpoint above the Treasury which is accessed by following the path around the Royal Tombs. Keep left of the tea shop as you approach the later stages of the hike and ask the staff to point you in the right direction. The view and the pics are absolutely worth the hike!

The impressive theatre was built into the rock of Petra during the first century. Only the facade remains of the tombs visible at the back of the theatre as they were destroyed to allow construction in the theatre.

5 | The Royal Tombs at Petra

The Royal Tombs consist of the Urn, Silk, Corinthian and Palace Tombs and each took their name from the tombs decor. The Urn Tomb is the most distinctive and was named due to the urn adorning its facade. The Silk Tomb neighbours the Royal Tomb and takes its name from the colour of the rich sandstone.

The Corinthian Tomb is next and, although badly damaged, resembles a small version of the Treasury. It takes its name from the Corinthian-style columns and facade. Finally, the Palace Tomb is said to resemble a Palace. It is three stories high and the widest of the Royal Tombs.

6 | The High Place of Sacrifice

Located at the very top of a trail, the High Place of Sacrifice is the most accessible of the dozens of Petra’s High Places.

It is thought the altar was used for animal sacrifices and this is supported by the drains which would have carried blood down the valley. It’s an 800 step climb and the views are incredible over Petra below.

7 | The Street of Facades

The Street of Facades is lined with impressive Nabatean tombs with large facades which were carved into the southern cliff face immediately after the Treasury.

Visit Petra tip: Petra by Night is not included in the standard ticket admission to Petra and only runs on Monday, Wednesdays and Thursday nights. The tour takes around 2 hours and departs at 8.30pm from the Wadi Musa entrance to Petra.

Read more about our visit to Petra by Night!

Things to do near Petra

Little Petra, a much smaller and quieter version of the main Petra site, has buildings carved out of the sandstone rock. It’s a nice alternative to Petra when you want to explore somewhere quieter and off the beaten track.

While it lacks the headline buildings of Petra it’s still worth a visit and a highlight is the Nabatean painted interior of the Painted House which has managed to survive the test of time.

10 | Admire the views of Petra from afar

There are some incredible views of Petra from the surrounding hilltops. Our favourites were the sweeping view of the valley from a spot between the Movenpick Hotel and Little Petra and the view of the Petra Mountains from our hotel, the Marriott Petra – check prices here!

Occupying a 2000-year-old Nabataean rock tomb, the Cave Bar in Petra is considered the oldest bar in the world. Sipping a cold drink in an ancient cave really is the perfect end to those perfect Petra days.

For more reading on Jordan

Leave a Reply to Taste of France Cancel reply