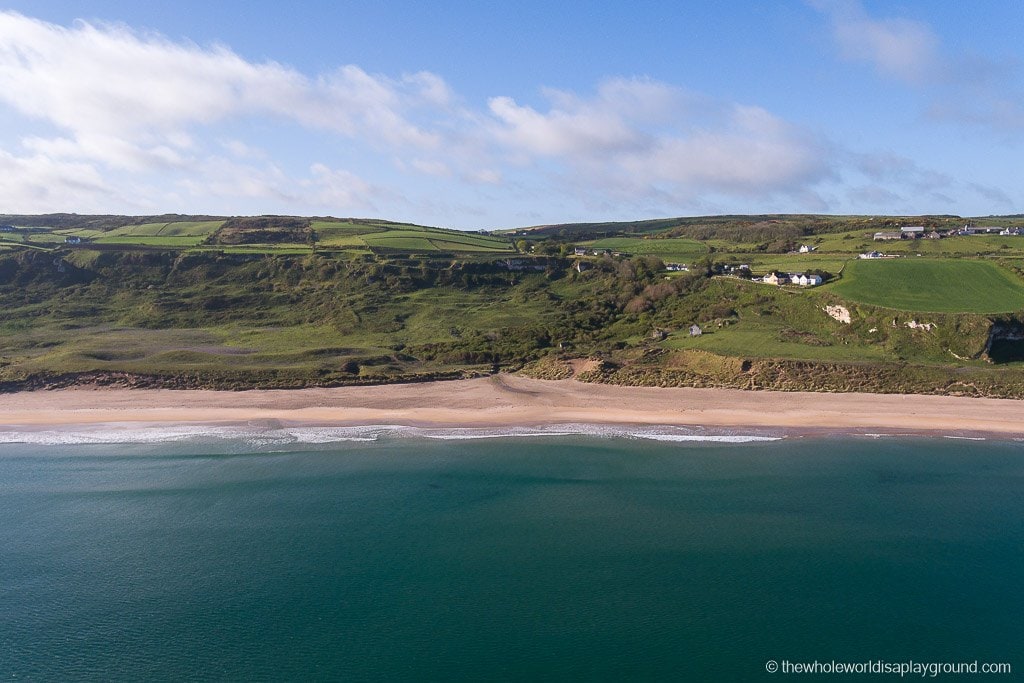 The Causeway Coast, located along the north Antrim coast of Northern Ireland, is truly one of the world’s best roadtrips and is filled with incredible sights and fun things to do. With a weekend to explore the incredible scenery, enjoy the delicious food and get lost in this magical part of the world we set to work to discover everything the Causeway Coast had to offer. Here’s what we got up to! 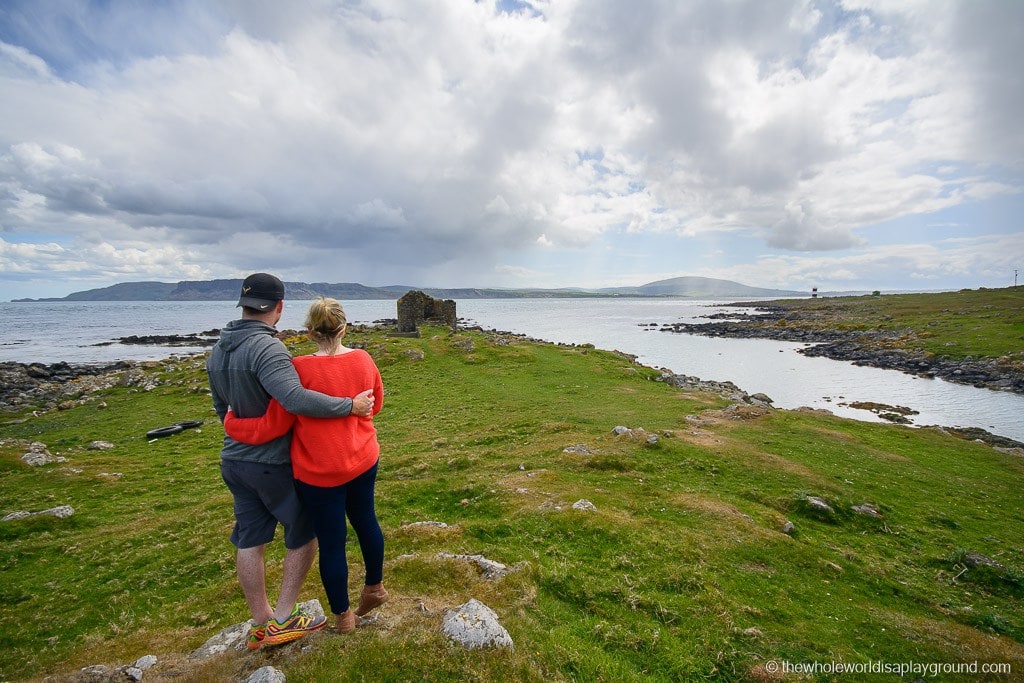 A weekend on the Causeway Coast

Having left Dublin mid morning we arrived in Bushmills, a tiny village on the Causeway Coast most famous for its namesake Bushmills whiskey and home to the oldest distillery in Ireland, a few hours later. As we drove to Antrim we had two of the iconic Causeway Coast sites on our mind: the Giant’s Causeway and the Carrick-a-Rede ropebridge. From Bushmills it was a short jaunt to the legendary Causeway, a 60 million year old collection of hexagonal stones reaching out to the sea and the perfect spot for an afternoon walk against the stunning backdrop of coast and nature. Legend has it the columns are the remains of a causeway built by giants, a theory which we were happy to go with! The adrenaline inducing Carrick-a-Rede rope bridge, which combines a 1.5 mile coastal walk and a rope bridge crossing to the tiny island of Carrickarede, was next on our list and we took a well earned break in the evening sunshine of Carrickarede!

Causeway Coast tip: the overspill car park at Carrick-a-Rede was the setting for the Game of Thrones scene in which King Renly set up camp in The Stormlands during Season 2 and the tournament in which Brienne of Tarth was introduced took place.

We checked into our hotel for the weekend, the lovely Roe Park Hotel Resort. After a delicious dinner in the hotel’s Coach House we relaxed in our stunning bedroom suite. This 4 star hotel was the perfect base to explore the Causeway Coast and, together with its lovely rooms, is well equipped with a spa, swimming pool, golf course and great food options. 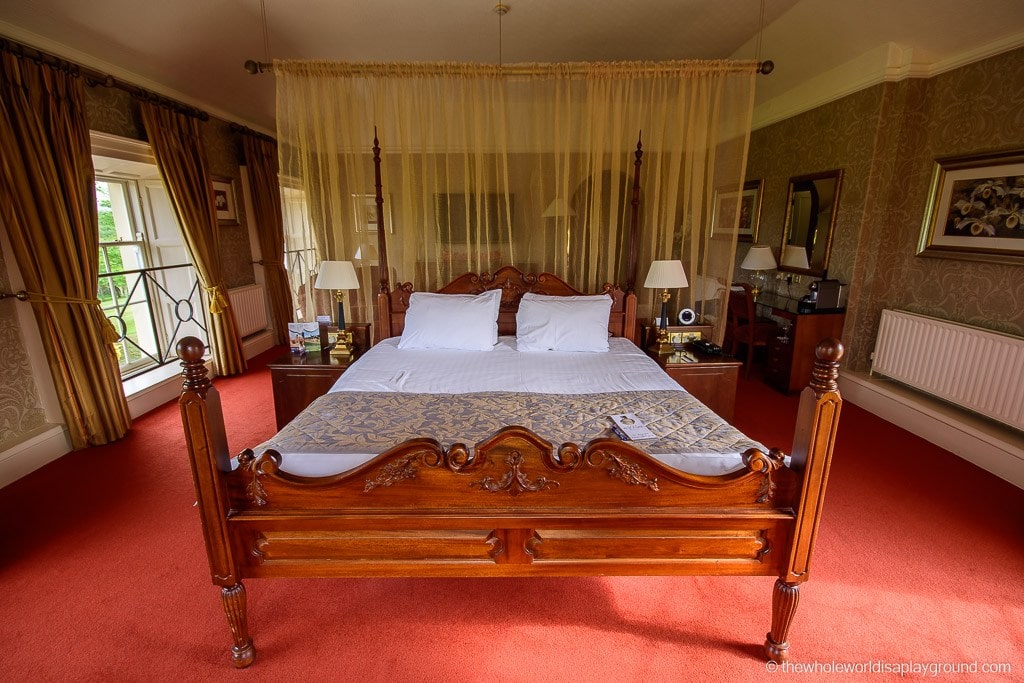 We set out Saturday morning to explore the western part of the Causeway Coast. Our first stop was Binevenagh Forest Park, a sprawling forest that sits atop Binevenegh mountain. The panoramic views from the summit stretch for miles across Lough Foyle and are simply stunning. En route we checked out the statue of Manannán Mac Lir, the mythical Celtic sea god, which watches over the entrance to Lough Foyle.

From there we made our way to Downhill Strand, an 11 mile stretch of beach which perfectly encapsulates the beauty of the Causeway Coast. Cars can park up on the beach and it was so much fun to grab a spot beside the ocean and feel the sand beneath our feet. We spied Mussenden Temple, perched precariously on the clifftop above Downhill, from the beach below and made our way up top to explore. Mussenden Temple is in the beautiful Downhill Demense, an 18th Century estate built for Earl Bishop, guarded by the impressive Lion’s Gate.

A combination of sea air and lots of walking meant we’d worked up an appetite and we popped into Ballymaclary House where we were welcomed with a warm fire and a delicious lunch which we followed up with some awesome cake treats!

From there we took a little detour to the Dark Hedges, one of our favourite places on the Causeway Coast. The imposing avenue of beech trees were planted over 200 years ago and became a Northern Ireland icon after featuring in Game of Thrones as King’s Landing. Stormy weather has taken its toll on the trees over the years but they’re still an incredible sight to behold. We wrapped up our sightseeing with a walk through Limavady’s Roe Valley Park and enjoyed the tranquility of an evening walk meandering along the river. The park is home to the Leap of the dog Statue, which, legend has, represents a wolfhound who leapt across the river to deliver the message that the clan ruling Limavady in the 17th Century were under siege!

A three course meal was required to round up the day and we headed over to the Lime Tree, one of the best restaurants in Limavady. where we feasted on amazing local produce, fresh fish (we’re still talking about the fish stew) and, the star of the show, an amazing sticky toffee pudding for dessert!

Rathlin Island, the most northern point in Northern Ireland, has been on our bucket list for years and, when we awoke to blue skies and sunshine, we knew we were going to have a perfect day for exploring the Island. Rathlin is the only inhabited offshore island in Northern Ireland and is home to 140 people. It’s accessible by ferry from the mainland and we disembarked at the harbour after a gentle crossing on the Rathlin Island Ferry. Our first stop was the bird sanctuary which was teeming with birds and we spied some adorable puffins through the on site telescopes provided to spot the wildlife.

Lunch was calling and we popped into the island’s Manor House for some Sunday treats. Fish was again the star of the show which was not surprising given our proximity to the coast!

We spent the rest of the afternoon exploring Rathlin in the sunshine. The simplicity of the island, the wildlife and the slower pace of life felt like we were taking a most welcome step back in time and when it was time to depart we didn’t want to leave.

A short ferry ride later and we were back on the mainland ready for one last jaunt along the Causeway Coast. No visit to the coast is complete without a stop at the picturesque Ballintoy Harbour for both the ice cream and the views. The Harbour is another Game of Thrones filming location and was the setting for Theon’s return to the Iron Islands. Venturing a little further from the Harbour towards White Park Bay we spotted the fantastic Elephant Rock, so called because it looks like an elephant! Obviously! The rock was another coastal fave for us!

White Park Bay and Dunluce Castle were our final sightseeing stops of the day before we wrapped up the weekend with a delicious meal in Tartines at the Distillers Arms in Bushmill where the fish and chips main stole our hearts and sealed the deal on a perfect weekend road trip!

1 thought on “The Causeway Coast: a weekend roadtrip!”