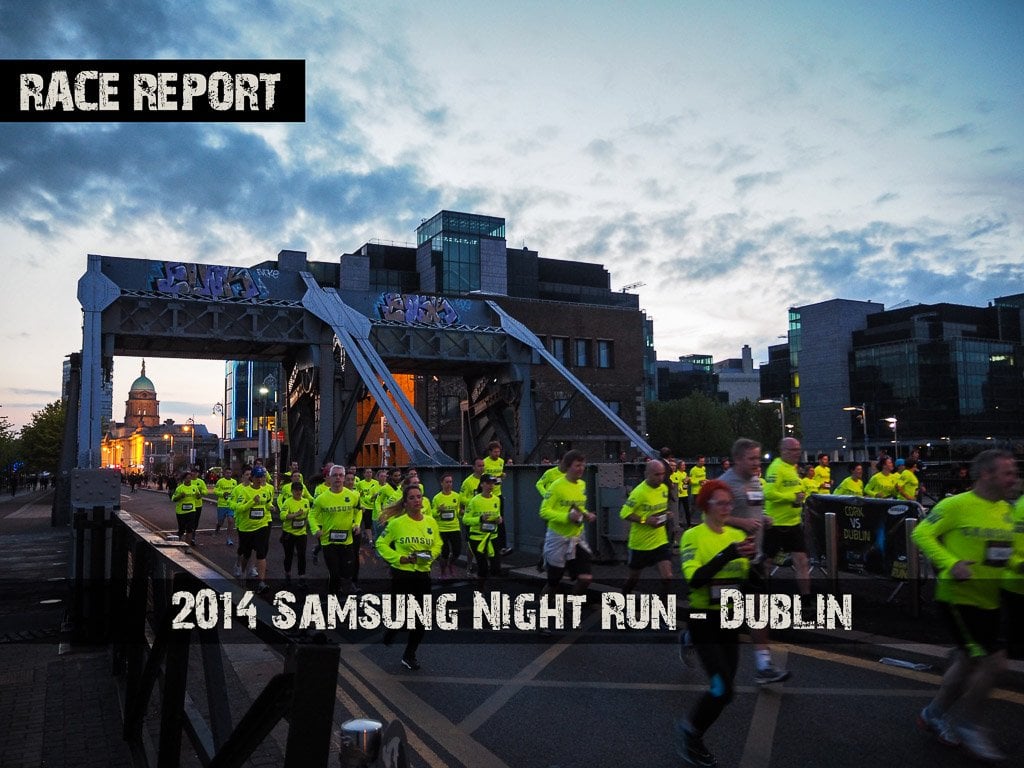 After a slightly indulgent end to the year and a self-imposed running hiatus since the New York marathon in November, I needed a race to aim for to ease into the 2014 running season.

I was quite taken with the neon yellow t-shirts pictures in the promotional materials and so I signed up for the 10k Samsung Night Run in Dublin! The opportunity to tear along the Dublin Quays at night with a few thousand runners sounded like great fun and the perfect motivation to hit the streets and get back to training.

The race took place on one of those cracking sunny spring days when Dublin looks its finest. I was feeling pretty energetic after heading out for a round of golf earlier in the day (complete with the requisite golfers tan) but I’m not sure the 18 holes helped with the 10k run! 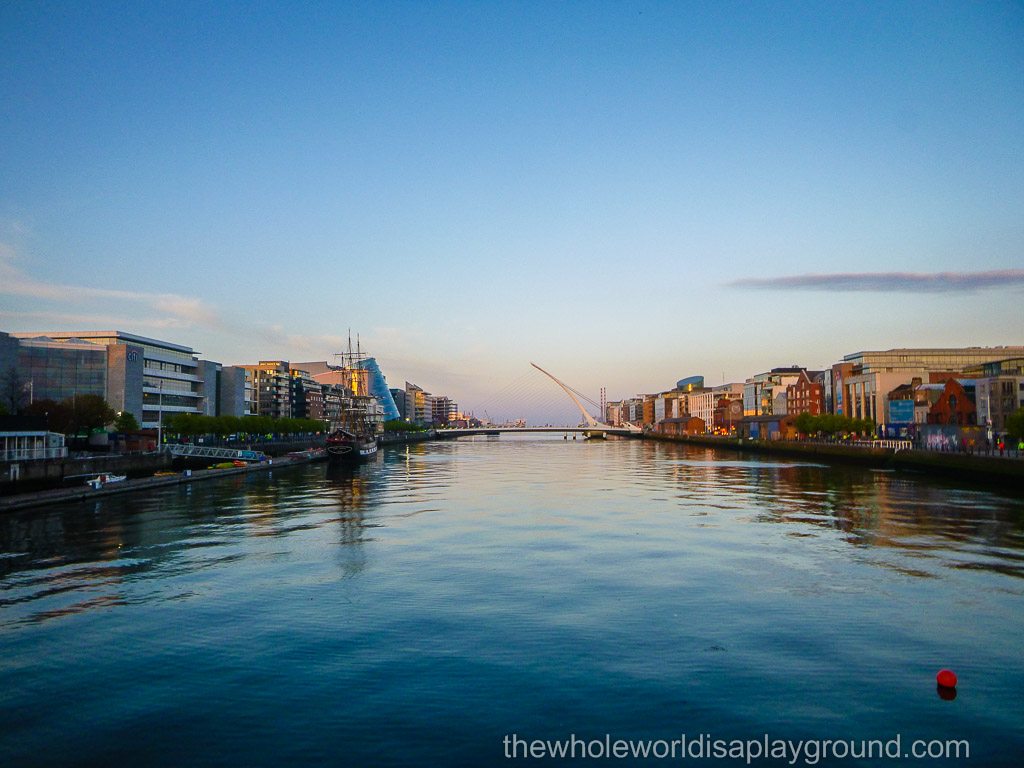 Elaine, the wifey, was coming along to cheer me on so we headed over to the Quays to soak up some of the pre-race atmosphere and warm up. The Quays were awash with a sea of yellow jerseys and the DJ was playing some high energy tunes to get the crowd hyped up. 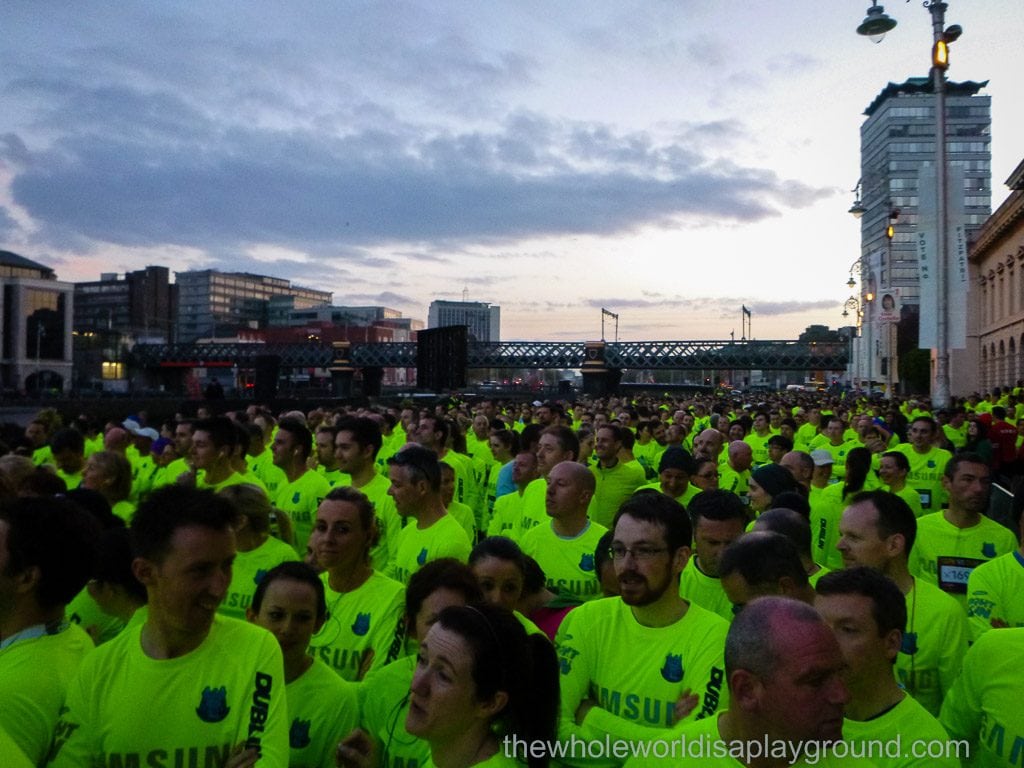 I wasn’t planning to push myself too hard during the race as I’d been out of action for the previous month due to a slight fracture in my toe (very annoying) and this was my first run since the injury. 18 holes of golf and no training are not exactly my ideal race preparations but I was looking forward to checking out the route and getting some kilometers under my belt!

The start line was situated at Custom House Quay and, after my usual pre-race routine of a warm up and a bathroom call (for those who like to know this kind of stuff: there were lots of portable toilets so queuing wasn’t a problem), I headed over to the race corral at around 8:45pm. The corrals were filling up and I wanted to grab a good position and chill out before the starting gun.

The run was held in Cork on the same night and billed as a battle of the cities, with the city with the quickest average race time winning, and there was some friendly banter with Cork over the life feed. 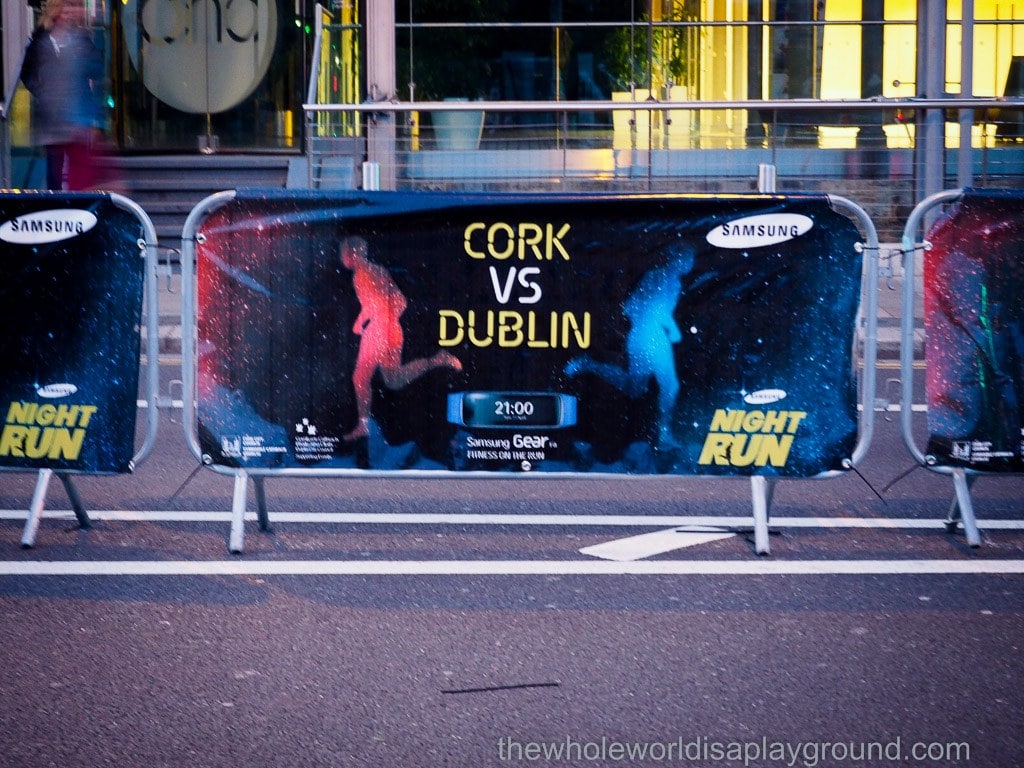 After a few more fun tunes from the DJ and some inspirational stretching warm-ups over the PA, the starting gun sounded and we were away. 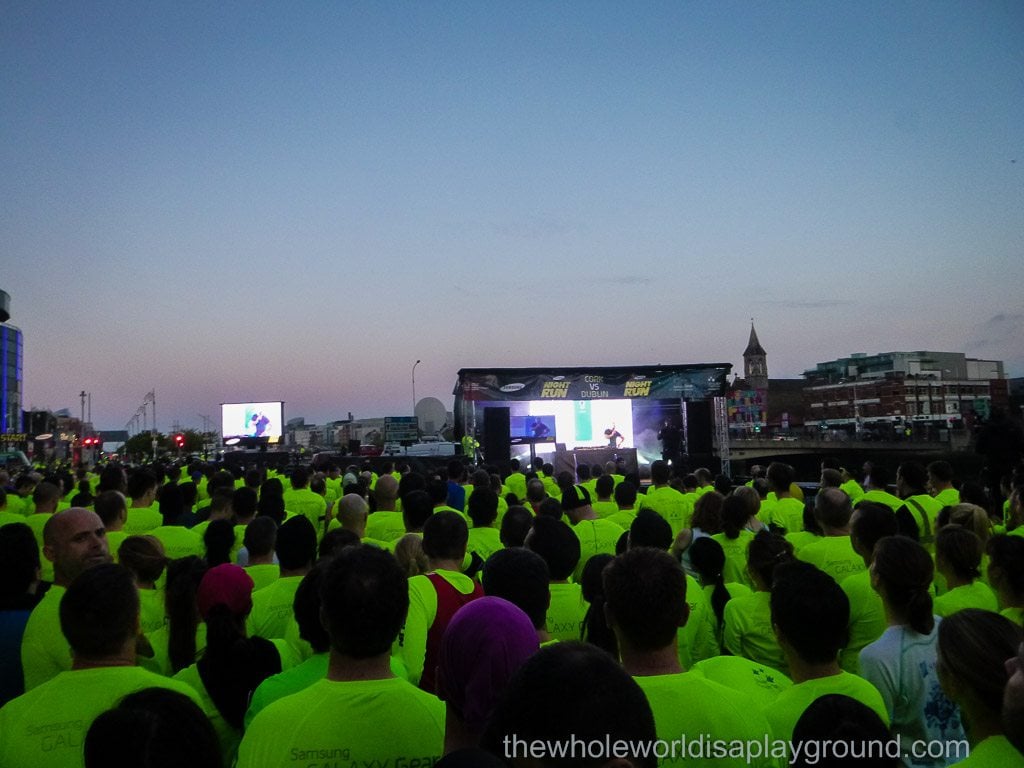 The 2014 route kicked off at Custom House Quay and finished on North Wall Quay, crossing the Samuel Beckett bridge twice in between. It sounds more complicated that it was! Given the city centre route, it was inevitable that there were lots of twists and turns but it was relatively easy to navigate with the roads closed to traffic during the race. 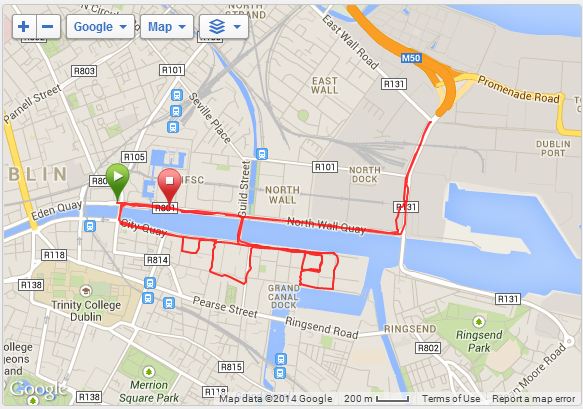 After signing up, I was a bit disappointed to learn that the route had changed from the previous year and no longer included O’Connell Street. It turned out to be alright on the night and it was still a beautiful run along the Quays.

The race kicked off at late dusk and the sun was setting over Dublin as the runners set off from Custom House Quay. The Quays looked surreal as thousands of luminous yellow runners streamed across the iconic Samuel Beckett Bridge. 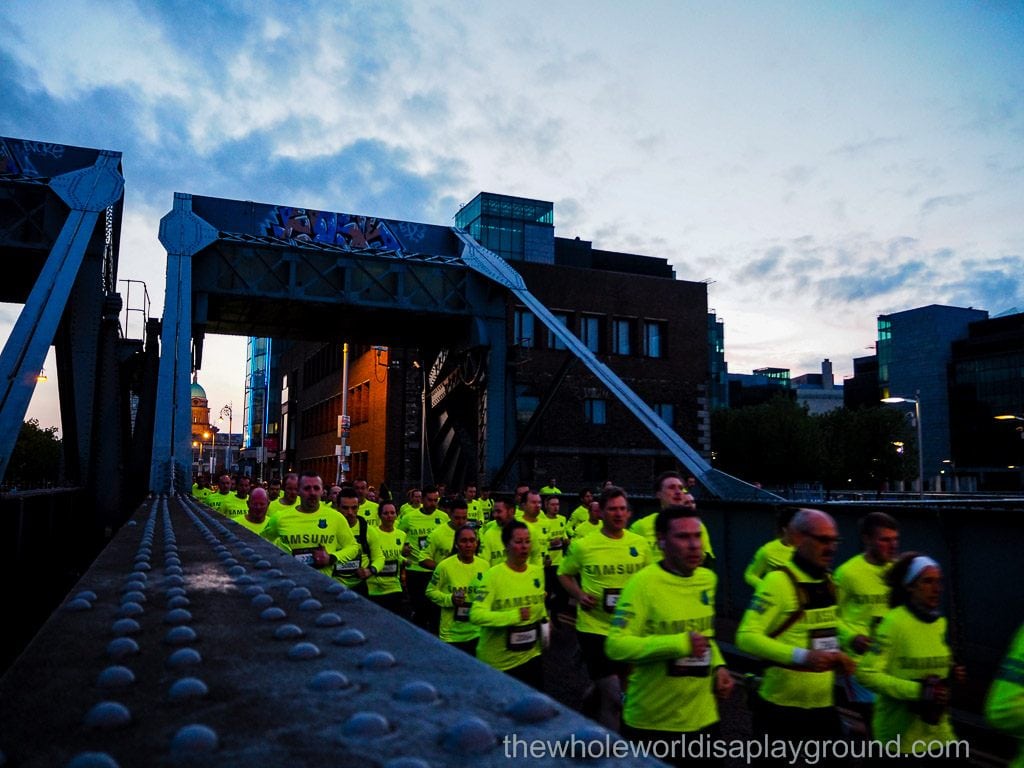 As with most races, the runners took off at a pretty intense pace for the first mile or so and, I have to admit, I did get caught up in the atmosphere and ran the first mile much faster than I should have. Given my injury and lack of training, I knew I wasn’t aiming for a personal best so I took my time to enjoy the race and appreciate the sights along the route.

After the first hectic mile, I started to slow down a bit. One advantage of carrying a camera is that I can slow down to catch my breath under the pretense of taking a photo!! 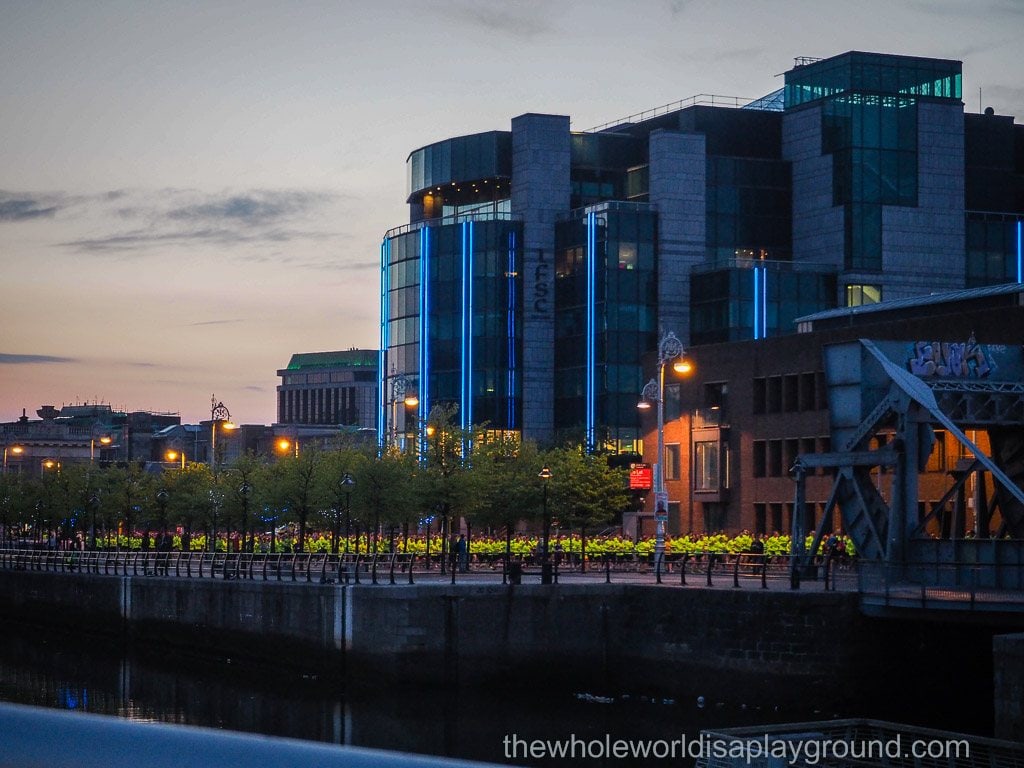 After crossing the Samuel Beckett Bridge we did a quick loop into Grand Canal Dock before crossing back and heading out to Dublin Port and the O2. This was a quiet section of the race with few supporters to keep the spirits up and, after a turnaround at the port tunnel, we headed back along the quays towards Custom House and the supporters. 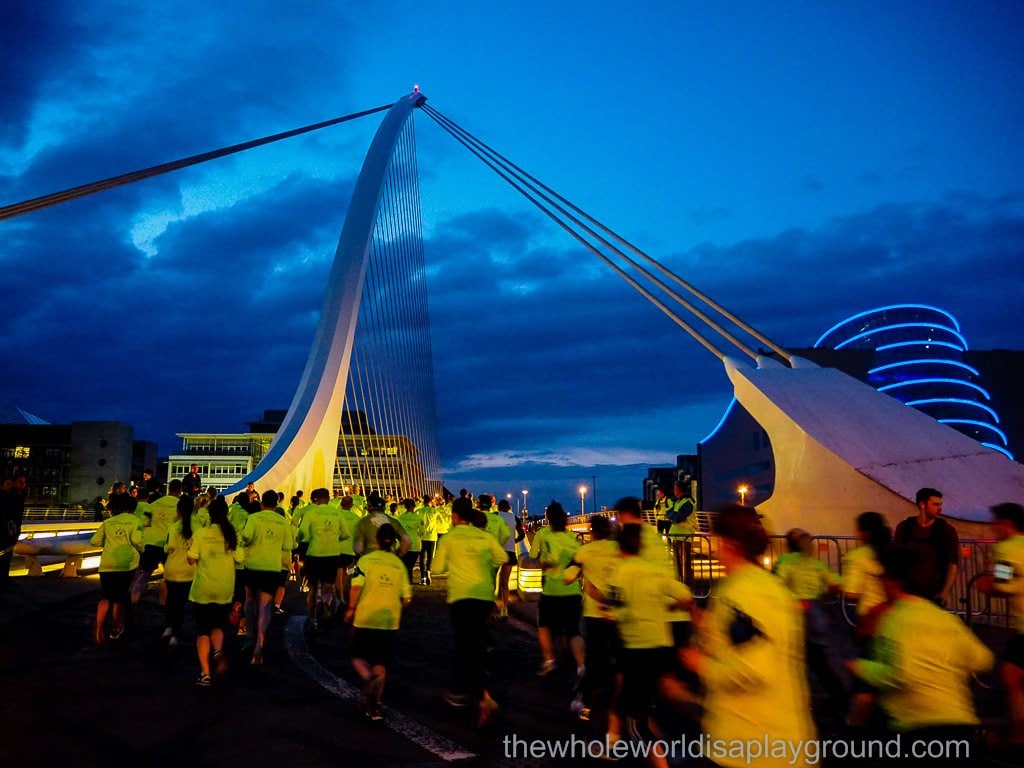 The route the turned onto the south side of the city at Talbot Street bridge and zig-zagged back along the quays to Grand Canal Dock.  After a few more cleverly disguised photo/rest breaks the finish line came into view on the North quays and the 10k was complete. 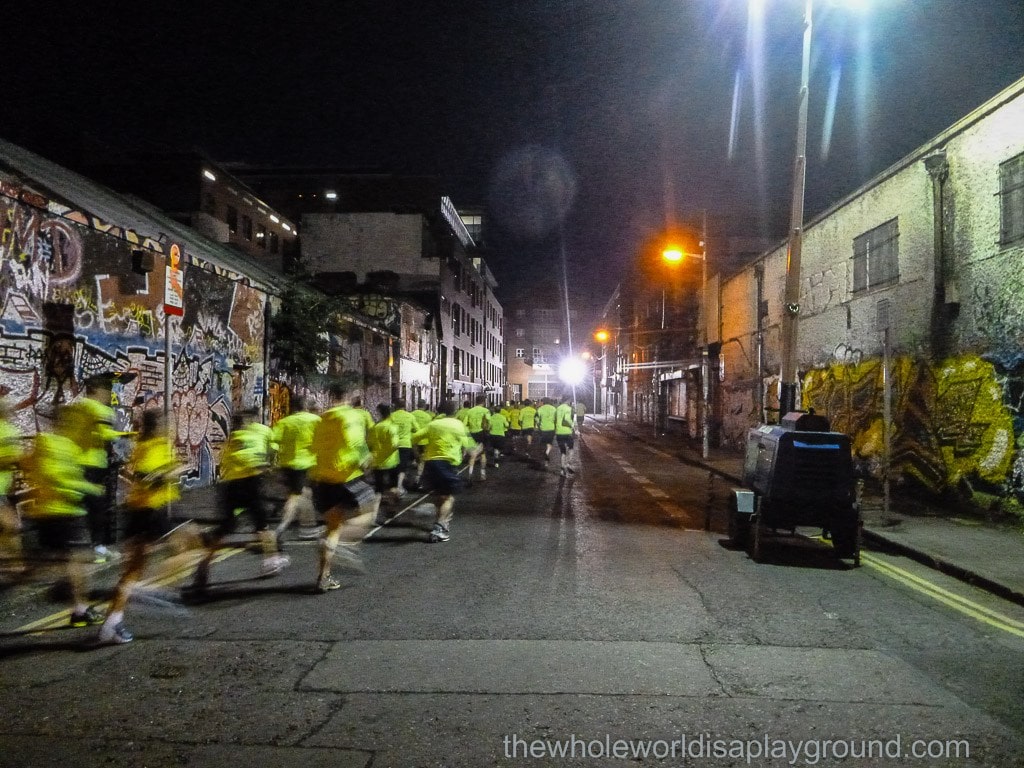 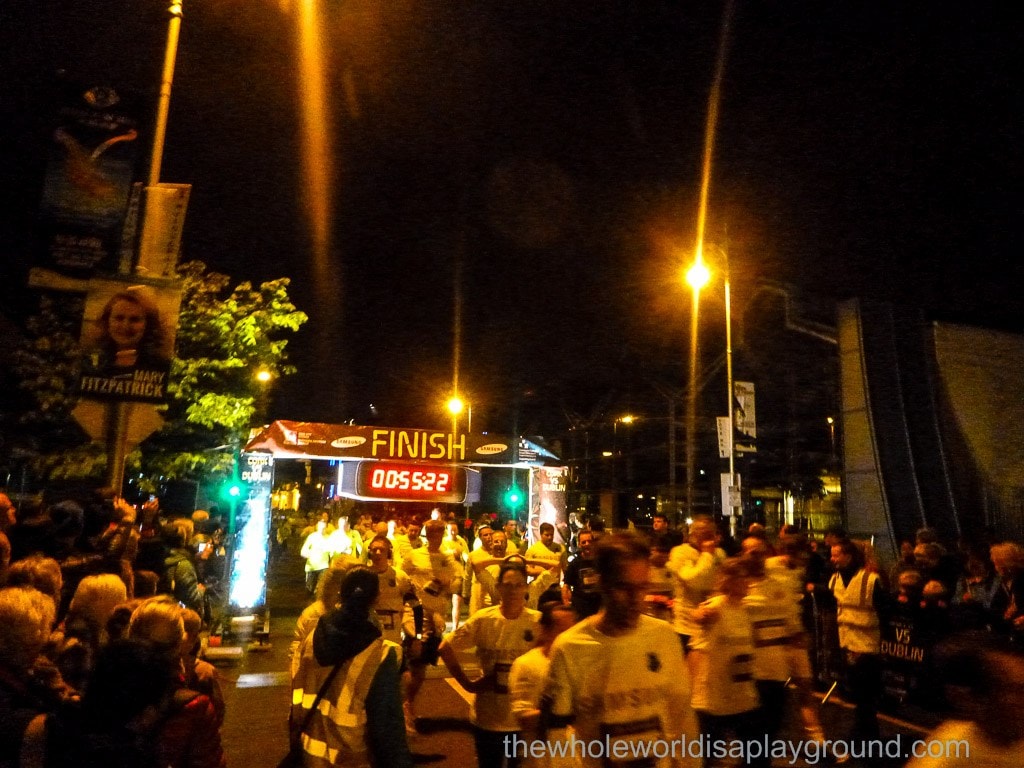 After some water and the receipt of a snazzy race medal, I managed to locate the wifey and the car and head home for some well-deserved Sunday evening pizza and couch action! 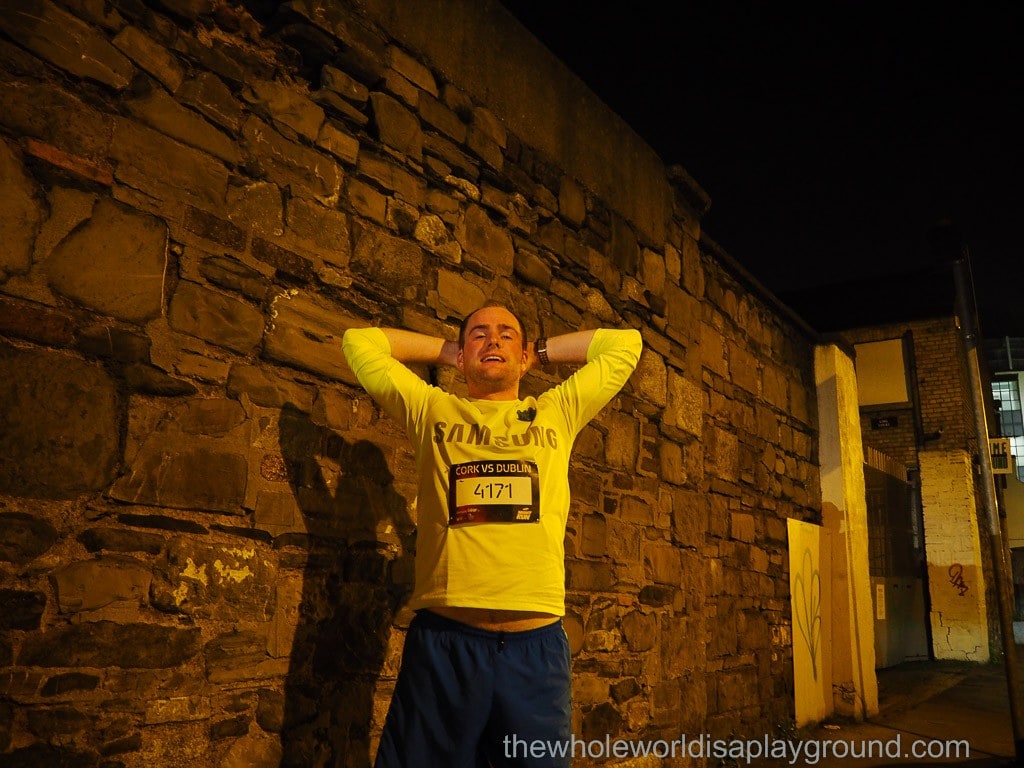 Most of the darker portions of the course were well lit by street lights and some additional spot lighting in places but I still needed to be observant of the contours of the road ahead. There were parts of the road that were quite rough with dips and bumps, which during the day would be absolutely fine, but in the pitch black could cause the occasional trip or fall. I did see a few people go down but there was nothing serious from what I could tell. It’s a definite help to have run in the dark before hand as it meant I was more alert to the obstacles on the road!

Overall the race was great fun and well worth the €31.50 entry fee. Given the large field of 7,000 runners in Dublin City Centre I thought it was very well organised and executed. I’d read complaints online about over-crowding on the route in previous years but, in my opinion, the  start of the race was staggered well and I had plenty of personal running space throughout the race. It was an amazing opportunity to run through Dublin at night without any traffic and see the city from an entirely different perspective.

The only real swag in the goodie bag was the luminous yellow Samsung Night Run running  top which I’ll definitely use again. 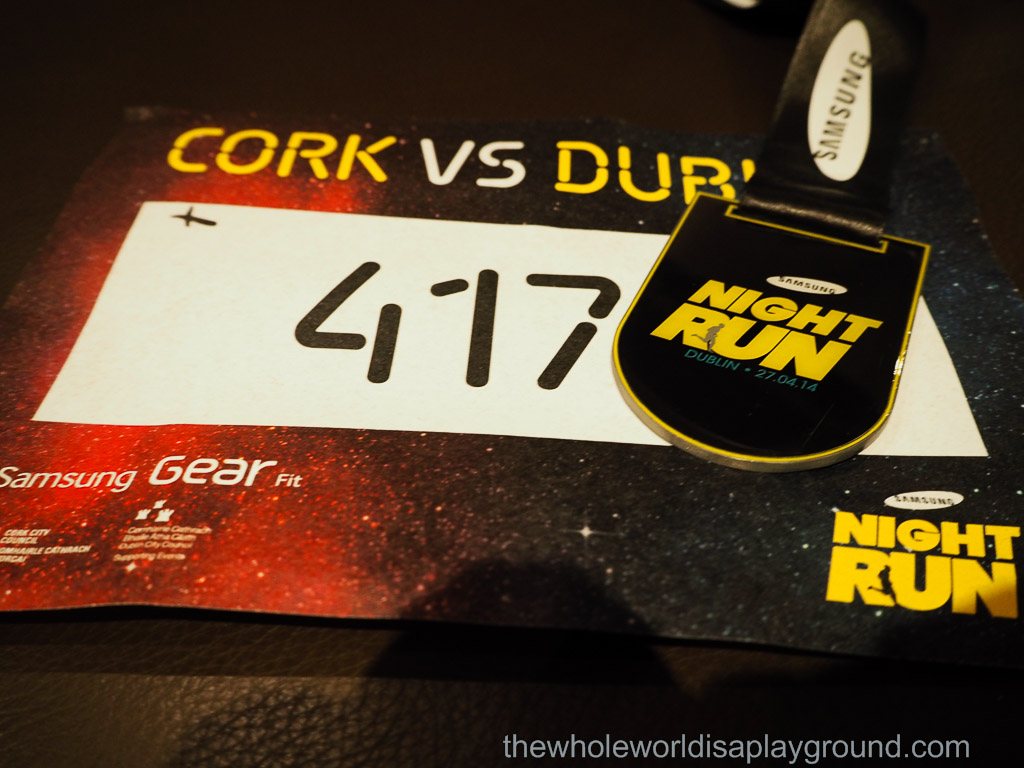 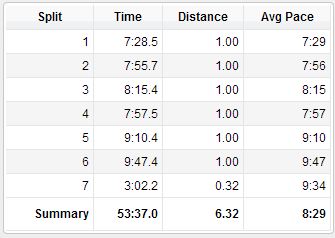 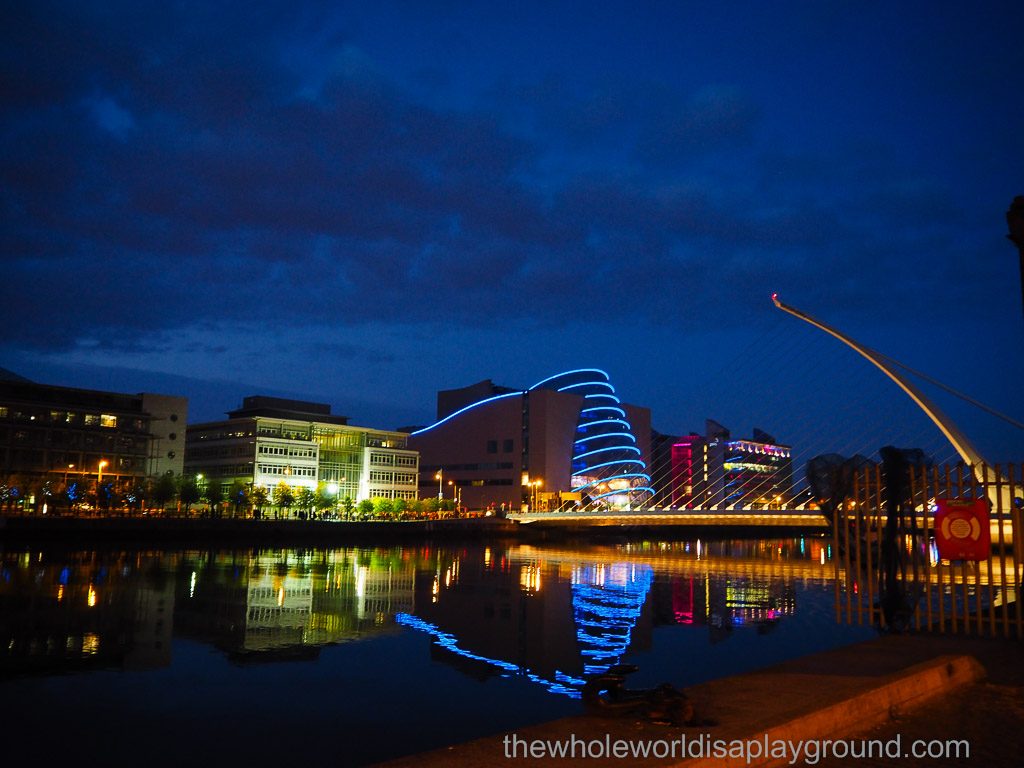 Race Pick Up: Race pack collection was from the sports centre in Trinity College Dublin on Friday, Saturday and Sunday. 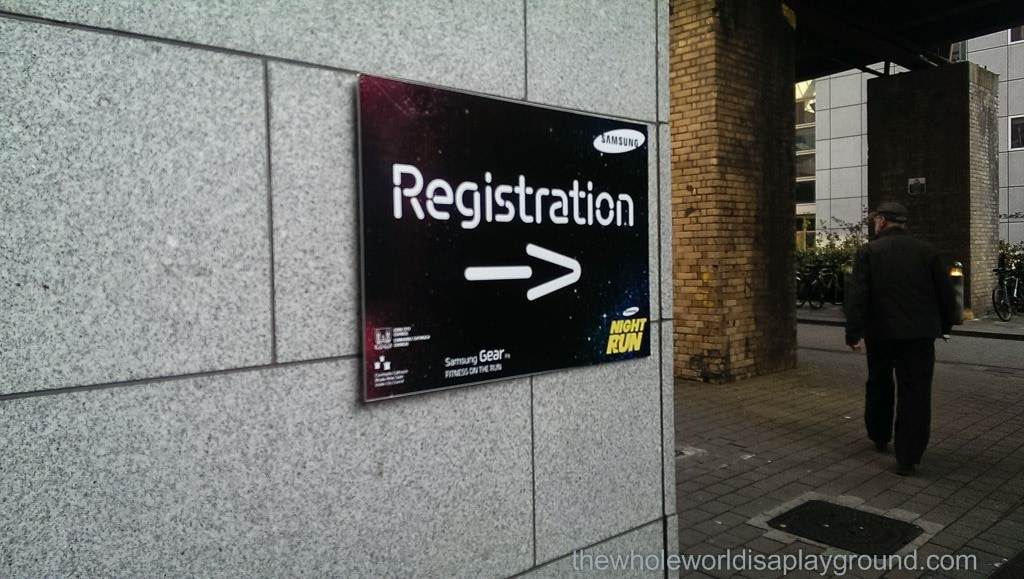