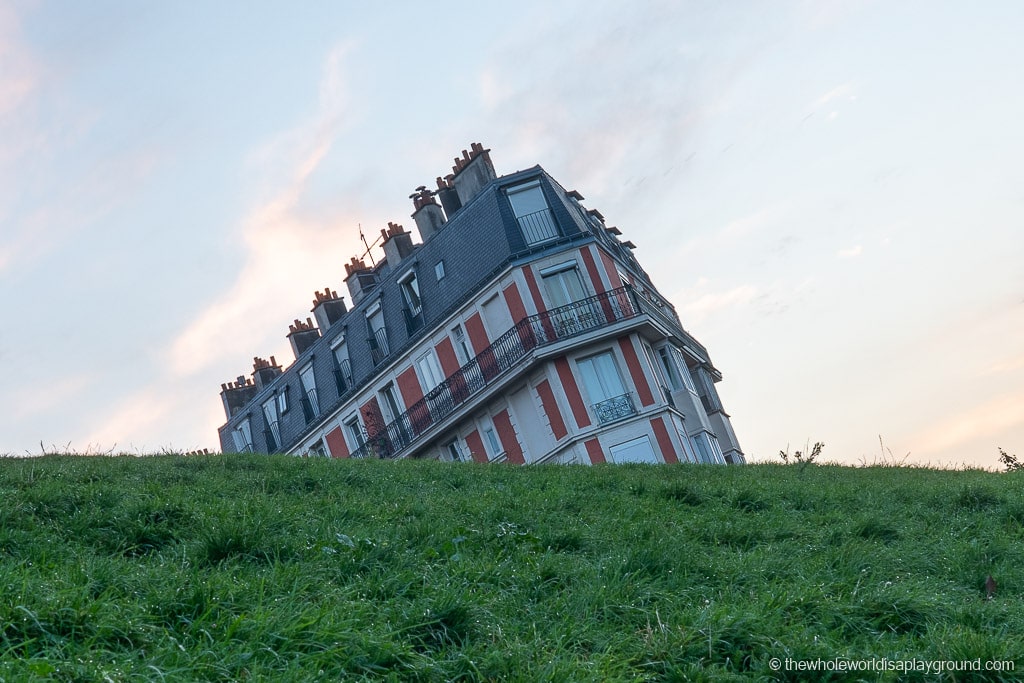 While planning our recent trip to France we came across a curious photo of a ‘Sinking House’ in Paris and we were instantly intrigued! The house, which appears to be sinking into the ground, has become a popular stop for a fun photo in Paris.

After visiting ourselves, we wanted to share all the details of the intriguing Sinking House in Paris, including where to find it and how to capture the famous photograph of the house appearing to sink into the ground.

What is the Sinking House in Paris?

The Sinking House is a house in Montmartre Paris that, if photos are to be believed, looks like it’s sinking into the ground!

The house sits on Butte Montmartre, the highest natural point in Paris, and the topography of the hill and the position of the house combine to create an awesome optical illusion of a Sinking House in Paris!

Where is the Sinking House in Paris?

The building in question is located in the hilly Montmartre district of Paris, close to the stunning Sacre Couer Basilica. Due to its location right beside the Sacre Couer many visitors to Paris will actually walk right past the view of the sinking house and never actually see it.

As you climb the steps to the Sacre Coeur, there is a small grassy bank on the right of the steps and the Sinking House is located behind the grassy bank. It’s quite easy to miss the house as it’s pretty non descript and only visible from this set of steps.

Map of the Sinking House in Paris

We’ve made this map to show exactly where to stand to see the best view of the sinking of Montmartre.

How to get to the Sinking House in Paris

There are a number of ways to get to the Sacre Couer and the viewpoint of the sinking house.

You can also take the funicular train that runs alongside Square Louise Michel (the gardens in front of the Sacre Couer) as it’s a steep climb via the steps from the bottom!

Another great option is to use one of the bike-sharing networks that are popular in Paris. We used the Lime bikes on a recent visit to Paris and they worked great – we downloaded the Lime App onto our phones and then scanned the QR code on the bikes when we wanted to rent!

So, just to be clear…is the house actually sinking?

As you have probably realised by now, no the house isn’t actually sinking! The illusion of the sinking building is simply a trick of the camera. By taking the photo at a certain angle or editing the image later it makes it look like the building is sinking into the ground!