Having travelled with our drones for almost a year we wanted to share our tips and advice on carrying a drone to new countries, through airports and on airplanes and capturing the best possible footage on your travels. Travelling with a drone has opened up so many new possibilities for us as photographers and travel writers and has given us the ability to take videos and photos from new and unique angles. Our drone is now a travel staple and we’ve successfully navigated deserts, waterfalls, jungles and highways: here’s our guide and tips for travelling with a drone so you can do it too!

1 | Know and respect the drone laws

Drones are becoming more and more popular and, as a result, are attracting new rules across the globe. Drone laws are evolving in individual countries and knowing and understanding what drone use is allowed can be complicated. It’s your responsibility to know and abide by the local drone laws: not doing so could land you with a huge fine or liability for causing injury or damage. A good site for checking updates to laws is here but be aware that drone laws can change quickly so make sure to google any updates to laws before you travel

Tips for travelling with a drone: to give you an example of how drone laws can vary our recent travels have seen the following laws: drone use is permitted in Namibia but only outside of national parks, it is strictly forbidden and enforced in Botswana while simply owning one in Egypt is enough to warrant arrest! 2 | Travel with your drone as carry-on luggage

Drones are expensive and fragile so we avoid checking in our drones unless the airline rules require it: Emirates, for example, require drones to be transported in check in luggage. The lithium polymer batteries are a legitimate fire risk so be sure you follow the airline rules regarding their transportation as there are typically restrictions on the number of batteries and where they should be stored in your luggage. We use a fireproof charging bag for additional safety, like this one for the DJi Mavic Pro.

3 | Invest in a portable drone

The DJI Mavic is the most compact drone for travel and is the easiest to transport. We use both a DJI Phantom 4 and the DJI Mavic and, although the Phantom 4 is our favourite for footage, it’s the Mavic which accompanies us on trips requiring air travel or where baggage is restricted! The Mavic has many advantages: it folds into a small package, it’s a lot quieter than larger drones meaning it’s discreet and the DJI software is the best on the market which reduces the likelihood of a crash. While we take the Phantom 4 wherever we can the Mavic never leaves our side!

Travelling with a drone will likely mean your carry on bag will now become your drone bag so it’s essential to invest in a good bag. I usually carry the Mavic in my camera bag, a LowerPro Pro Tactic 450W and I recently picked up a smaller dedicated case which is great for throwing the Mavic into any bag. Depending on the trip we’ll bring it in one of these three cases:

For the Phantom 4 we use either the case it came with or our LowePro Protactic 450.

Our DJI Mavic Pro and Phantom 4 average around 20-25 minutes of flight time per battery and it takes about 1 hour to charge a drained battery. Extra batteries are essential to avoid losing flight time!

One extremely useful item to pack while travelling is a car inverter for charging the drones in a car. We use this one which sits in the cup holder of the car and charges a drone in the same time as a wall outlet. Don’t leave home without one of these. 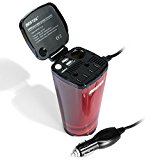 6 | Be friendly to airport security!

One of the biggest potential headaches you will face while travelling with drones is airport security. Be polite, offer to show them the drone and batteries when passing through screening and answer any questions they have.

Tips for travelling with a drone: It often helps to take the drone batteries out of your bag and put them in a separate security bin. This reduces the chances of delays as the large batteries can get flagged inside your bag.

Neutral density (or ND) filters are a must for your travels! Most drones have fixed aperture leaving ISO and shutter speed to achieve a balanced exposure – in bright sunlight, as the shutter speed increases, the footage quality decreases and can be shaky and filters will be your lifeline! These are simply a must have if you’re serious about drone video. The best filters we’ve used are made by Polar Pro:

Check out our other must-have drone accessories here

8 | Be friendly to spectators!

Drones are a relatively recent travel addition and inevitably attract a lot of attention. It’s a great chance to chat to the locals: we’ve found that most people are simply curious and want to see a drone in action. So be nice, say hello, offer to take their photo or video. Worst case you’ll make some new friends and followers.

Tips for travelling with a drone: try and be mindful to others when flying a drone.  There’s nothing worse than ruining a romantic sunrise with the buzz of a drone!

Most drone laws prohibit flying above people and, as a general rule of thumb, you should avoid flying over people, especially in places where crowds are gathered. Not only is this a common courtesy to personal privacy, you’ll also be liable if the drone causes injury to anyone. Drones can run into difficulty at any time and there is no way to guarantee that it won’t crash so avoid taking risks. Before you send a drone up in a new place it’s important to have a plan for your flight. This will allow you to capture the footage you need and it also reduces the chances of crashing the drone and allows you to be more efficient. Take note of any large objects, trees, power lines or buildings and make sure to stay clear of them. Google Earth and the Photopills (Android / iOS) app are great for planning done flights.

Magnetic Interference is one of the major issues which you can encounter when flying a drone in a new destination: it occurs when radio signals interfere with drone communications. The DJI drones all warn of magnetic interference before taking off so if you see this message do not take of – this caused us to crash our Phantom 4 drone on our first flight in Namibia! The best way avoid interference is to fly far away from any large antennae or industrial areas and, in order to avoid any crashes, make sure you have lots of wide open space for the flight so you can recover from any lost signal.

11 | Maintain line of sight and learn to fly manually

Direct video streaming from the drone is fantastic as you can see what your drone sees and can fly in first person mode. However, the video signal can die, and trust us…it does happen! This is where maintaining line of sight comes in: if you can see your drone you can manually recover and bring it home. If you can’t see it you’re in trouble! Keep your eyes on the drone at all times! 12 | Be aware of animals and wildlife

Animals, especially dogs and birds, really don’t like drones as the sound is stressful for them and can easily scare them. Make sure to keep a safe and respectful distance from them. The same goes for safari although many companies already ban the use of drones while on game drives.

Tips for travelling with a drone:Be very wary of larger birds such as seagulls, which will try to attack the drone if you get too close – not good for the bird or the drone!

13 | Be careful in cold weather

Consumer drones are only designed to operate in temperatures above freezing so be careful if you’re visiting a cold country. If a drone gets too cold the drone can interpret this as being out of battery will literally drop from the sky. Be careful! Tips for travelling with a drone: in cold weather make sure to keep your batteries warm as the cold will run the charge down. We find the best place to keep batteries is in the inside pocket of your coat where it’s nice and toasty.

14 | Take advantage of the best times to shoot

The best time for taking images in general is early in the morning, just after sunrise, or late in the evening, just before sunset and the same applies to drones too. Not only will you get the best light for shooting but you’ll also benefit from having very few people around.

Flying a drone is a lot of fun but it does take additional time to setup a flight and capture footage. Allow extra time at a location for setup and flying or you might run out of time and miss the experience of your location: don’t let technology override actually being present in these incredible travel destinations. It’s relatively easy to crash a drone and the first casualty is usually the propellers as it is easy to damage them. Always carry a few extra propellers and some basic repair tools for your drone.

Tips for travelling with a drone: A basic repair kit (duct tape and a small screwdriver) and some extra propellers can have your drone back up in the air quickly after a minor crash. Priceless!

Flying a drone is a lot of fun so do remember to enjoy yourself when travelling with one!

11 thoughts on “17 Tips for Travelling with a Drone”