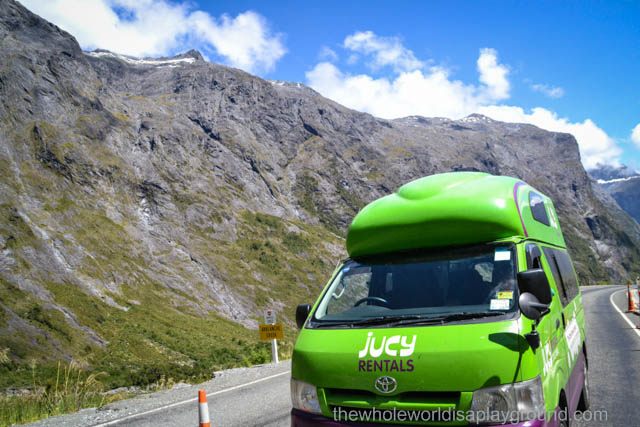 After researching all the places we wanted to hit on our trip we decided on a rough itinerary before we left.

We had prebooked the Interislander ferry with Jucy when we were booking our camper van and had allowed two weeks in the North Island and five weeks in the South Island. As we there in the summer we were advised to prebook the ferry to make sure we could cross on the day we wanted. There were a lot more places we wanted to see on the South Island so we allowed ourselves an extra few weeks to explore.

Aside from booking the ferry we decided to take each day as it came and enjoy it!

After picking up our campervan at Auckland airport we headed straight up to Bay of Islands. From there we headed down to Matamata, taking a detour to Waipoua Forest and then into Auckland on the way. The next night was spent in Waitomo before we headed down to Wellington via Lake Taupo for the ferry.

Check out where we stayed on the North Island here.

After getting off the ferry in Picton we stayed in Pelorus Bridge, then Maupa before making our way to Marahau to explore Abel Tasman. We were lucky to experience beautiful weather for this part of our trip so we decided to take advantage of the sunshine and head up to Golden Bay for a few days. From there we made our way down to Punakaiki and Lake Hawea. The weather was looking good for Milford Sound so we set off in that direction stopping overnight in Te Anau.

We had heard brilliant things about Arrowtown from other travellers on the campsites so we spent a couple of nights there on the way back from Milford Sound before making our way to Lake Tekapo. Akaroa was another recommendation from other campers so we made an unscheduled stopover and ended up extending our stay! This took us to the end of our trip and it was time to hit Christchurch for a night before our flight to Asia.

Check out where we stayed on the South Island.

With the spectacular scenery on offer New Zealand is an amazing country to drive around. Be safe and enjoy!