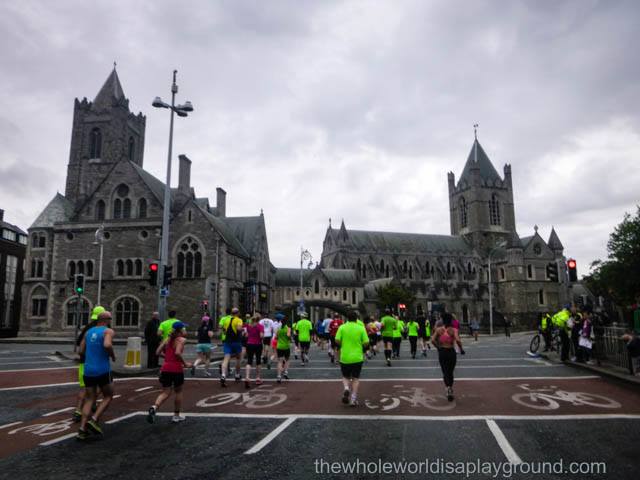 I discovered a new word today when we ran the Dublin Rock ‘n’ Roll Half Marathon. Sightrunning. As in sightseeing while running. I didn’t know it had a name but I’m feeling bang on trend right now as I’ve been sightrunning for years!

Running is a big part of my travels. It’s a great way to explore a new destination and helps me keep fit and stick to my daily routine. 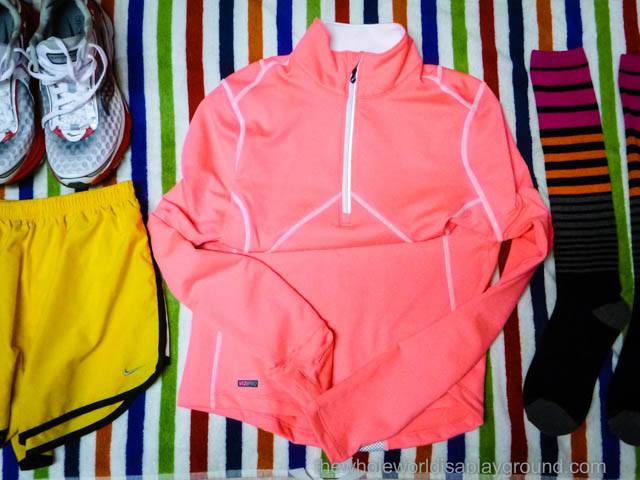 We were planning a weekend trip to our old playground, Dublin, Ireland. We went to college in Dublin and lived there for almost 10 years so it’s a second home to us. It’s a fantastic city bursting with historical landmarks, wonderful people and not forgetting the abundance of the legendary ‘craic’. I’m getting misty eyed just thinking about it! It’s been a few years since we made it back to Dublin and we were excited to see the city through the eyes of a visitor.

With our training for the 2013 New York marathon in full swing we were conscious of squeezing in a 13 mile run at some point over the weekend. It just so happened that our trip coincided with the inaugural Rock ‘n’ Roll Dublin Half marathon, a 13.1 mile race with live bands at every mile and a route taking us past some of Dublin’s most iconic landmarks. Perfect for a spot of sightrunning!

With the music blaring and the party atmosphere in full swing, we set off from St Stephen’s Green, one of Dublin’s most famous parks and immortalised in James Joyce’s Ulysses. It’s a perfect for a spot of people watching (my favourite past time!) or for lazing around on a sunny day.

I’ve spent many a happy lunchtime in the tranquil surroundings of the park. Heck, I almost got proposed to in Stephen’s Green but it turned out he was just tying his shoe laces! 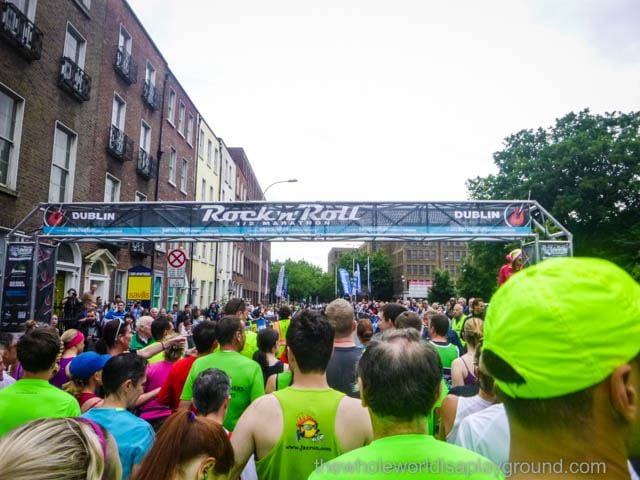 We passed by Christ Church Cathedral, one of the oldest buildings in Dublin, which was founded c1028. It houses one of the oldest medieval crypts in Britain and Ireland and contains the mummified remains of a cat and a rat trapped in the organ while chasing each other in the 1860s.

The next port of call was the Quays, running alongside the River Liffey and past the Guinness Storehouse at St James Gate Brewery. The Guinness Storehouse is one of the top tourist attractions in Ireland and is the home of the world famous Guinness  drink and the Gravity Bar with 360 degree views of Dublin.

I was tempted to nip in for a quick pint of Guinness and skip the rest of the race but it seemed a bit cheeky less than 2 miles in. Best to persevere for another while, sure in Dublin there’s a bar on every corner if the urge got too much!

I wasn’t too excited to arrive at the gates of Phoenix Park. Don’t get me wrong, it’s an amazing park with everything you could want for a day out, but there’s a 2 mile uphill drag that just keeps giving. Luckily there was plenty going on in the park to distract me from my tired legs.

The idea of the Rock ‘n’ Roll race series is to inject some fun into running by infusing it with music. There were some great bands in Phoenix Park blasting out my favourite songs and creating a fantastic atmosphere. 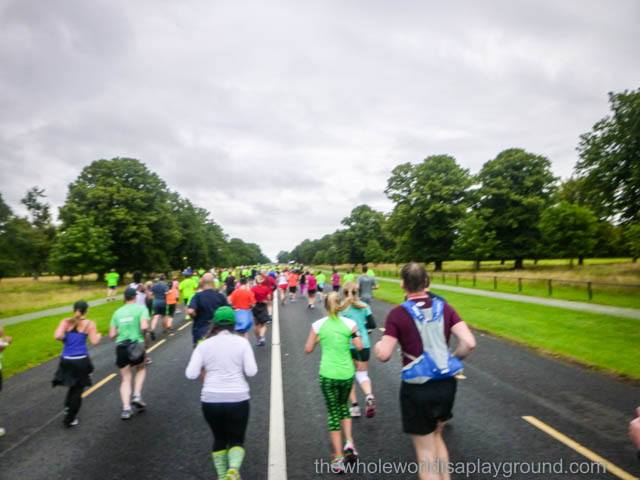 The park is one of the largest enclosed recreational spaces within any European capital city.  It’s home to Dublin Zoo, Áras an Uachtaráin (the official residence of the President of Ireland) and Farmleigh House (an official State guest house for visiting heads of State and dignitaries).

There’s also the Wellington Testimonial (a testimonial to the Duke of Wellington who is believed to have been born in Dublin), the Papal Cross (erected for the Papal visit of Pope John Paul II in 1979) and the Phoenix monument (with a Phoenix bird rising from the ashes).

We caught a quick glimpse of Dublin Castle as we were nearing the home straight. The Castle was the seat of British rule until 1922 and is now a major Irish government complex used for events such as the inauguration of the Irish president. 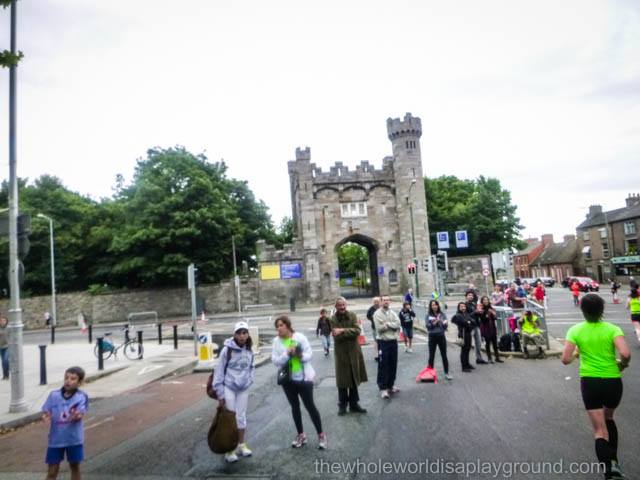 It wasn’t just the city’s finest sights that were on show on race day, there were some fantastic outfits among the runners. A special mention must go to the runner who appeared to have just stepped out of the set of Baywatch and I had the pleasure of the below view for a significant part of my race! All part of the fun!

It was one final push past the stunning National Concert Hall to the finish line and back to where we started at St Stephen’s Green.

13.1 miles completed, a whistle stop tour past some of the finest sights in Dublin listening to some great Irish bands along the way. What more could a girl ask for?!

A bit of bling of course! And a t-shirt! This is one of my favourite race medals and a gorgeous Ireland inspired t-shirt to add to the collection.

As we were participating in an organized race we followed the 13.1 mile race route. It’s possible to take in most of the sights on a shorter run out and back to Phoenix Park or to adjust the route to include places such as Trinity College and Temple Bar. 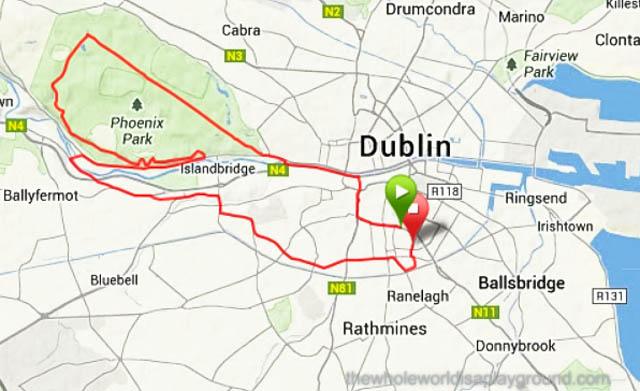 The inaugural Rock ‘n’ Roll half marathon took place on Monday August 5 2013, with 6500 athletes from 52 countries.

We picked up our race pack at the expo in the DoubleTree Hilton the evening before the race. We were staying in the hotel so it wasn’t too much of an inconvenience to wander downstairs! Our goody bag included a pack of Tayto, some blister bandages and a few leaflets with discounts.

The race was well organised and the starting corrals seemed to work well from where I was, mid pack. The route was relatively flat with a bit of a long uphill drag through Phoenix Park but otherwise nothing too hilly. The atmosphere was fantastic, the other runners were great craic and the bands along the way were a welcome distraction! Water was served in cups during the race and water bottles were provided at the end. Energy gels were provided at the water station at mile 7 and at the finish line.