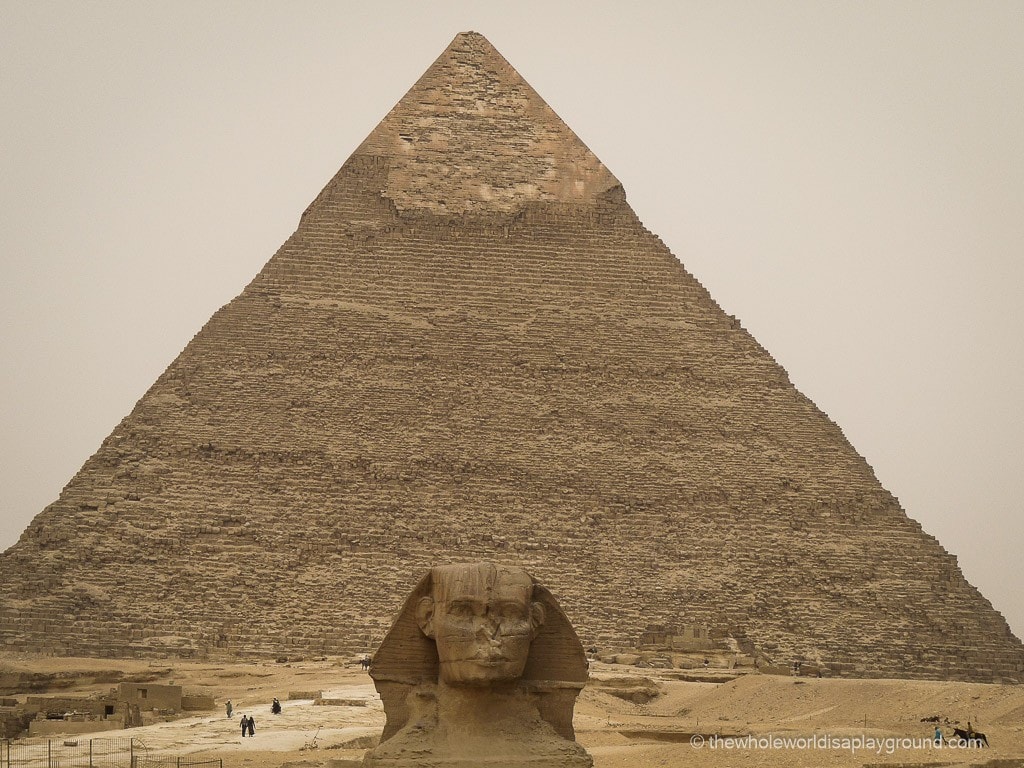 In thewholeworldisaplayground house our trips usually come about like this: casually flick through a travel book and spot an amazing site somewhere random in the world that we’ve wanted to see forever, decide that visiting said site is the best idea we’ve ever had and that we HAVE to go, book flights on a whim and figure the rest out later! It’s worked for us so far and the Egyptian pyramids were no exception!

An Ancient Wonder of the World and a UNESCO World Heritage Site? Don’t mind if we do! 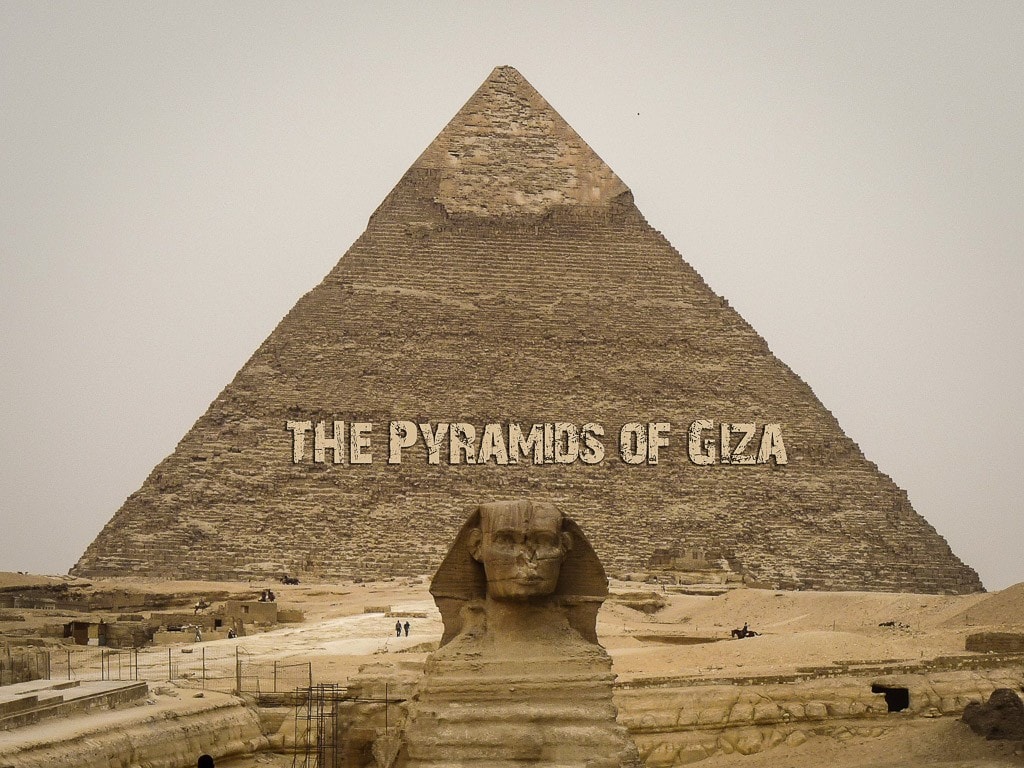 The Pyramids of Giza

The anticipation of visiting the pyramids had me up and ready to roll at 6am! It’s a running joke between us that flights and sightseeing are the only things guaranteed to have me bouncing out of bed at dawn so I don’t like to disappoint! Cairo is a huge city and a tour of the sights involves covering quite a vast area so we opted for a driver to take us around.

Our first stop was the Pyramids of Giza, Egypt’s most famous pyramids. I was expecting the pyramids to be in a secluded desert location so it was a big surprise when we turned a corner of a Giza suburb and there they were!

As we approached the pyramids we were blown away by their size and amazed that they had survived over 4,500 years on earth! I’m always a little emotional when we make it to an iconic site and to see the pyramids up close and personal was overwhelming! 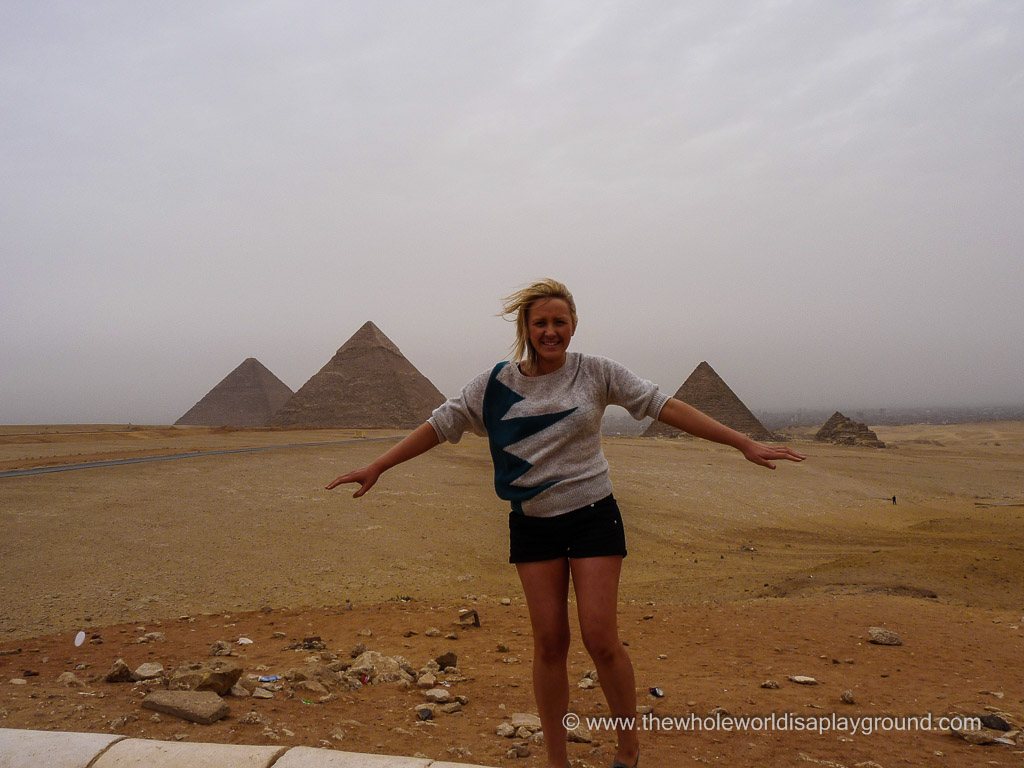 The Giza complex is made up of six pyramids and the Great Sphinx.

Our first stop was the Great Pyramid which is the oldest and largest of the Pyramids at Giza and is the only one of the Seven Wonders of the Ancient World to remain intact. The pyramid is huge, it’s like a mountain! It’s incredible to think that each block had to get to Giza through manual labour. No mean feat given that some of the blocks were almost as big as me! 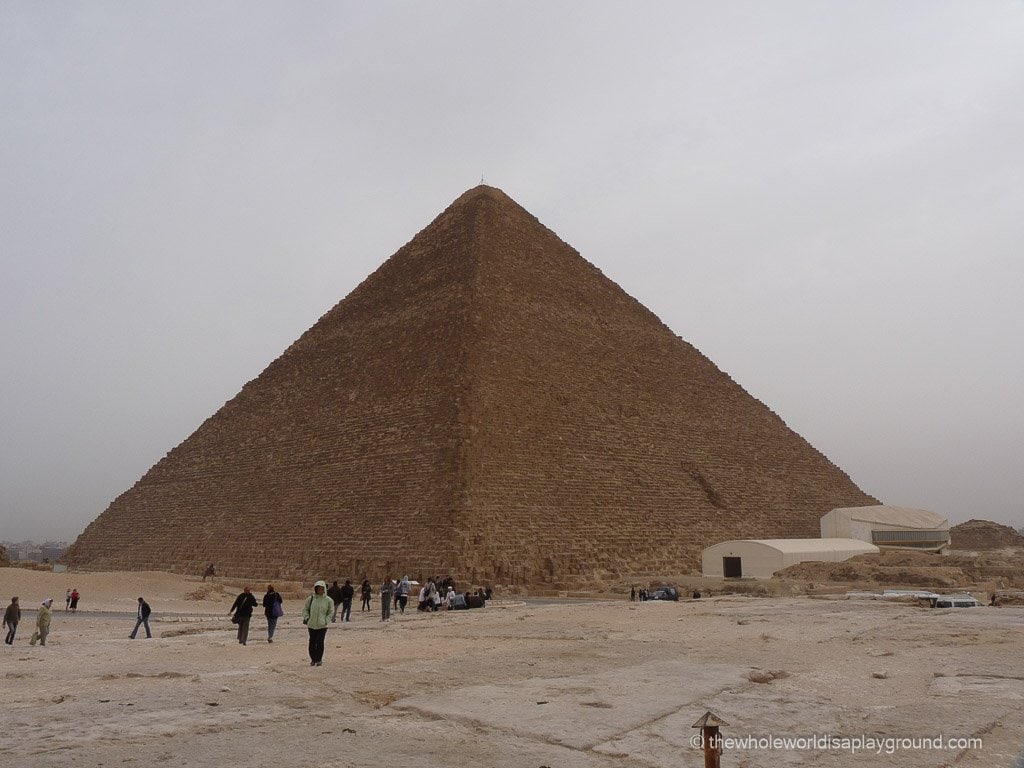 The Pyramid of Khafre: 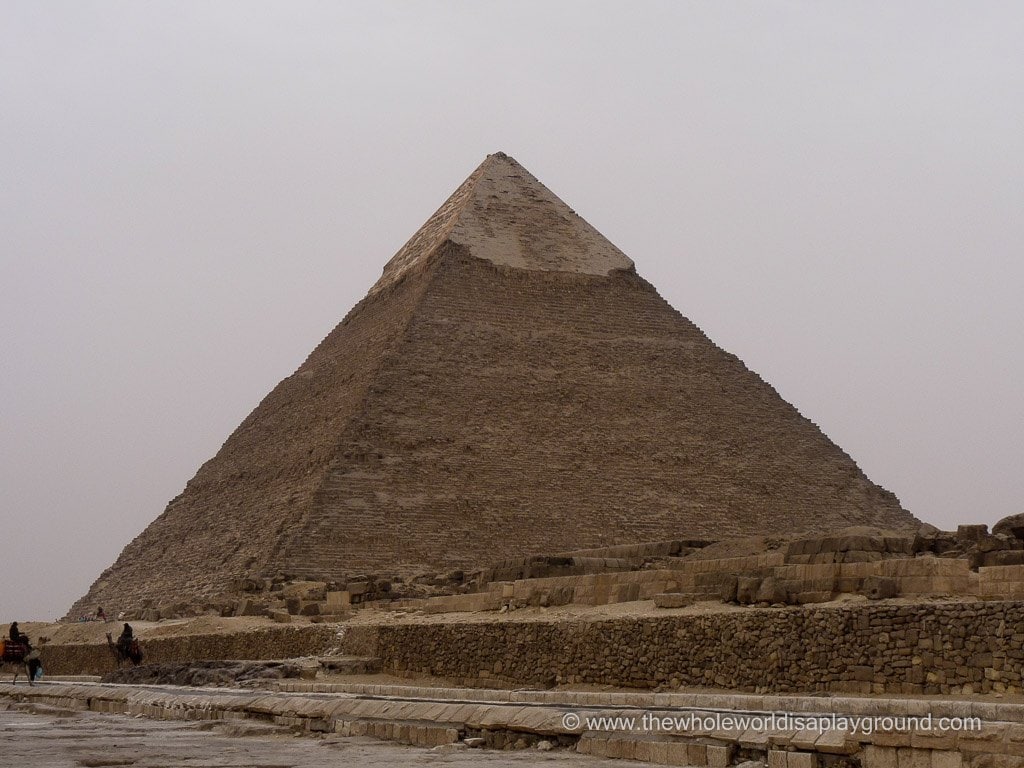 Feeling small beside the giant blocks of the pyramid! 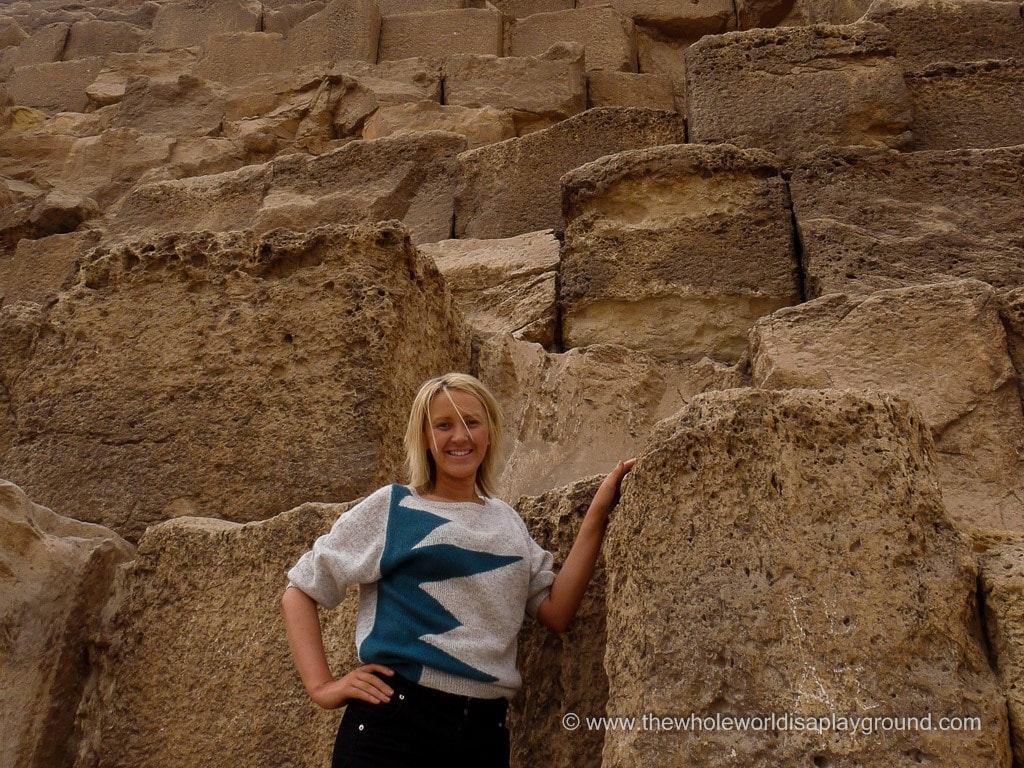 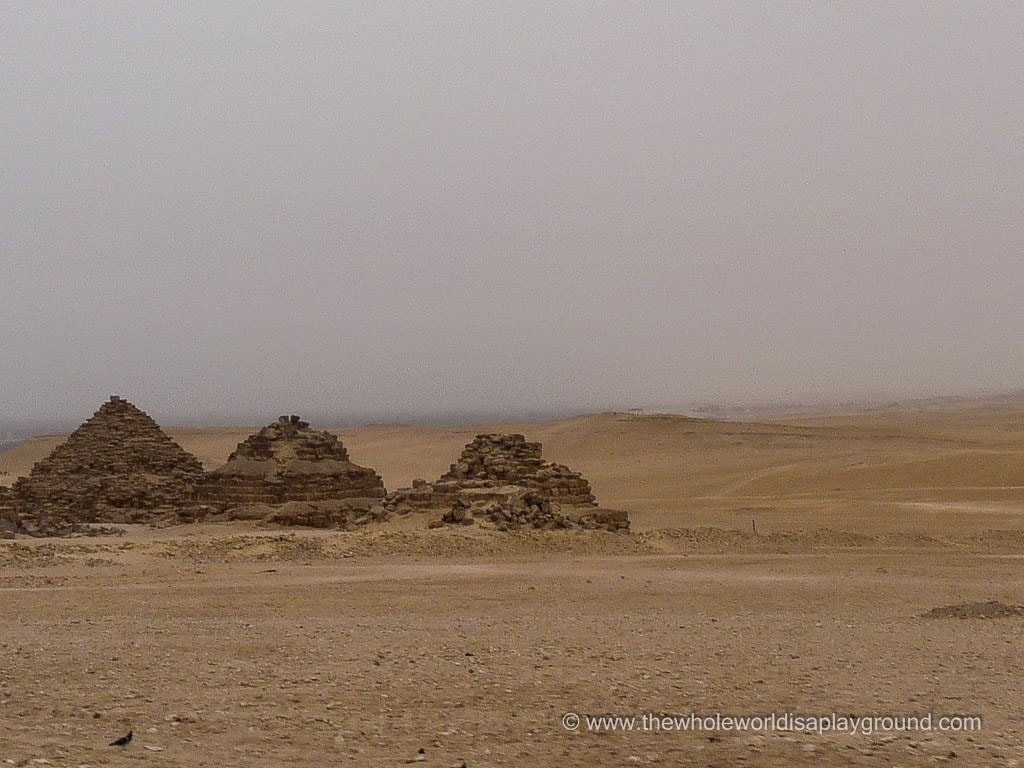 Fast food with a view: KFC and Pizza Hut opposite an Ancient Wonder of the World! 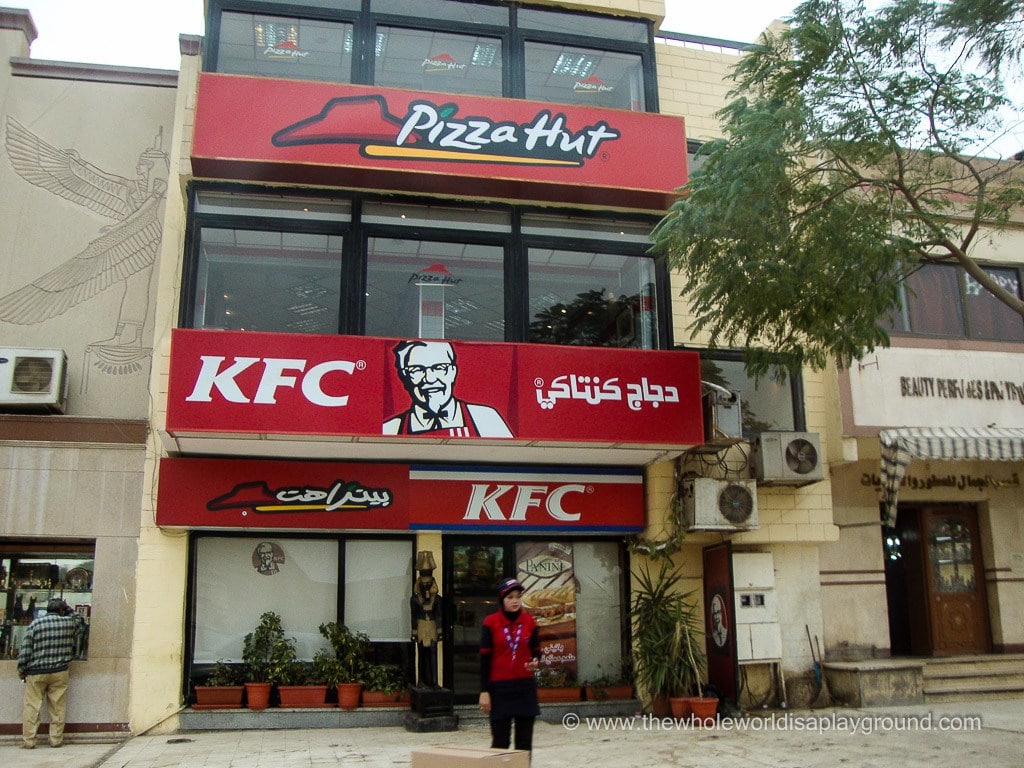 We checked out the pyramids from the outside but it is possible to enter the Pyramids of Khufu and Khafre for an additional fee if the urge takes you!

The Pyramids of Giza are one of the world’s greatest sights and it’s incredible to stand face to face with thousands of years of history. Seeing something so incredible was overwhelming and I was a little bubble of happiness for the rest of the trip! The pyramids are a once in a lifetime experience and we had an amazing time at both Giza and in Egypt!

Surviving a trip to the Pyramids!

Visiting the pyramids is a full on assault to the senses! The site is obviously hugely popular and there are busloads of visitors and a huge number of hawkers. We managed to make it through relatively unscathed by not engaging with anyone but it wasn’t easy!

You and I and all of the people! The Pyramids of Giza are a star attraction: 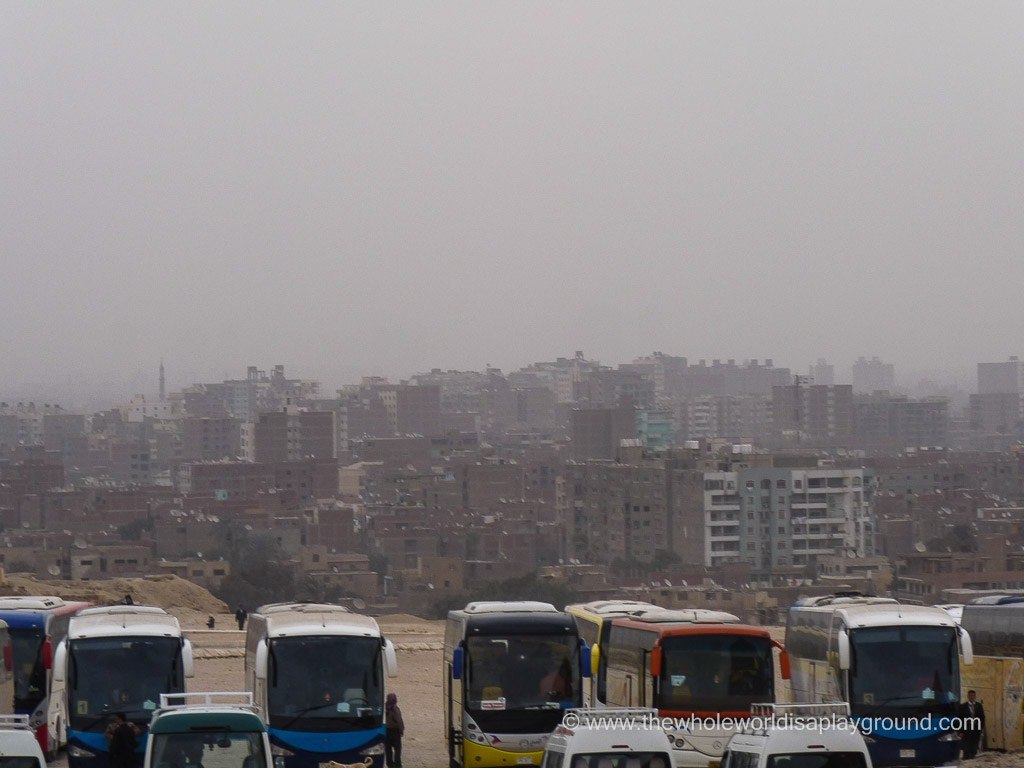 My rules are, in no particular order:

Most of all, enjoy the experience and embrace it for what it is. I promise you’ll be amazed by the techniques the hawkers use and they’ll give you plenty of giggles along the way!

Show me the money! I’m sure I paid at least a dollar to pose with this guy! 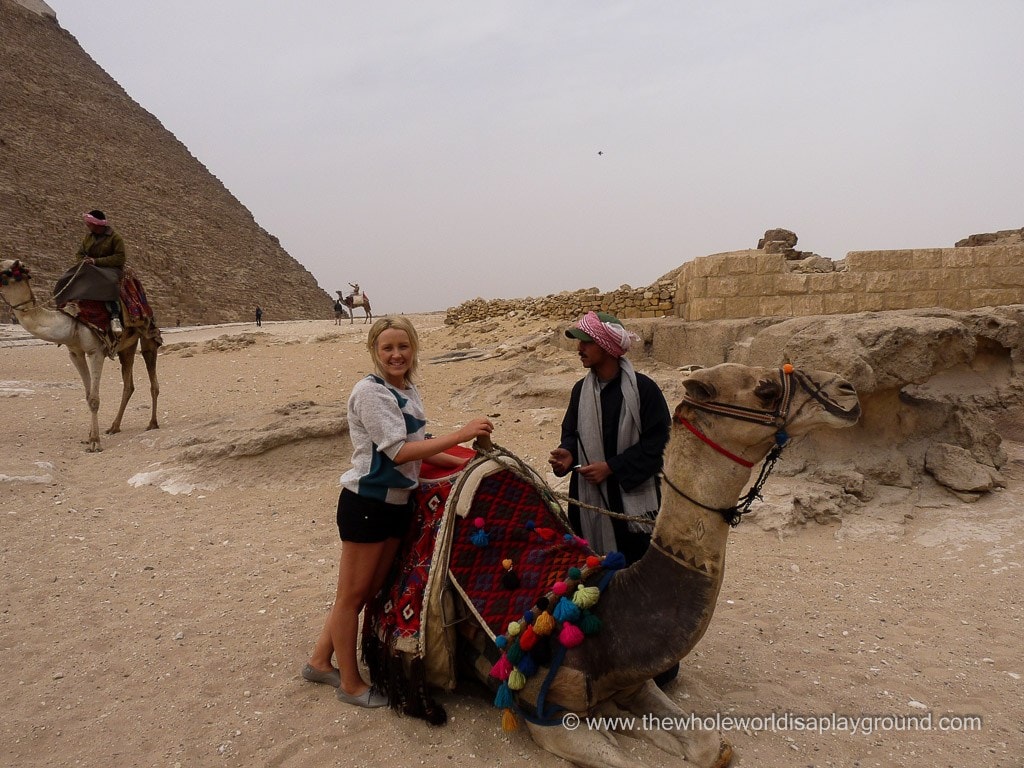 Location:  The Pyramids of Giza are located 25km southwest of Cairo city centre. 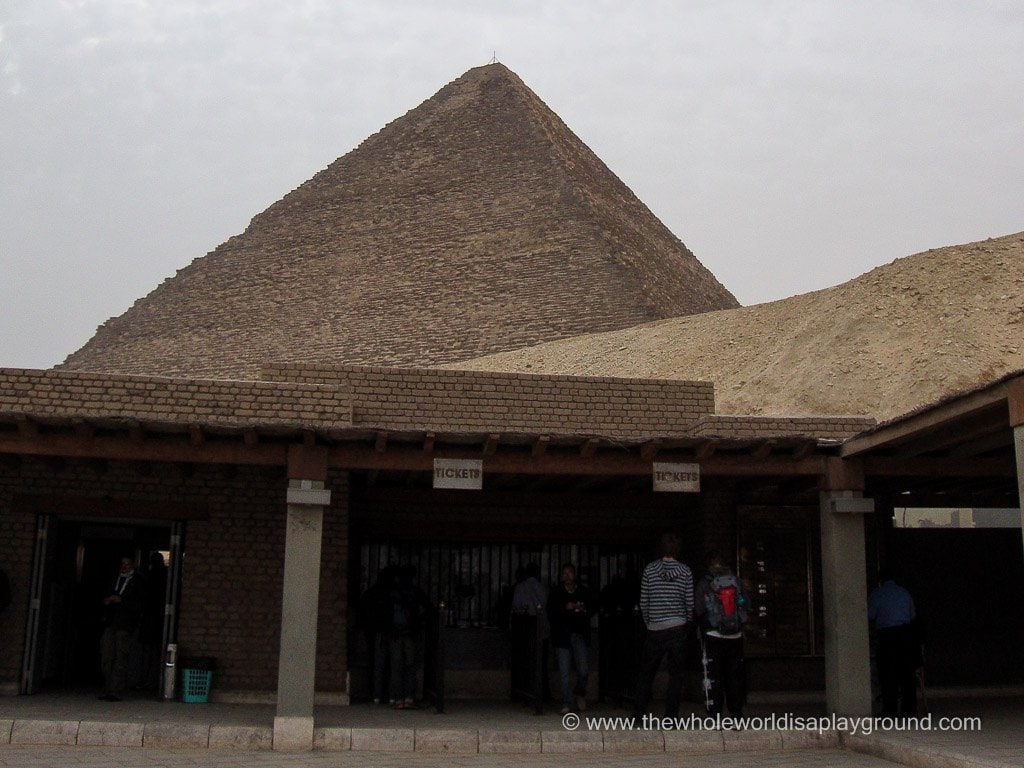 3 thoughts on “The Pyramids of Giza, Cairo, Egypt: a real life Wonder of the World!”