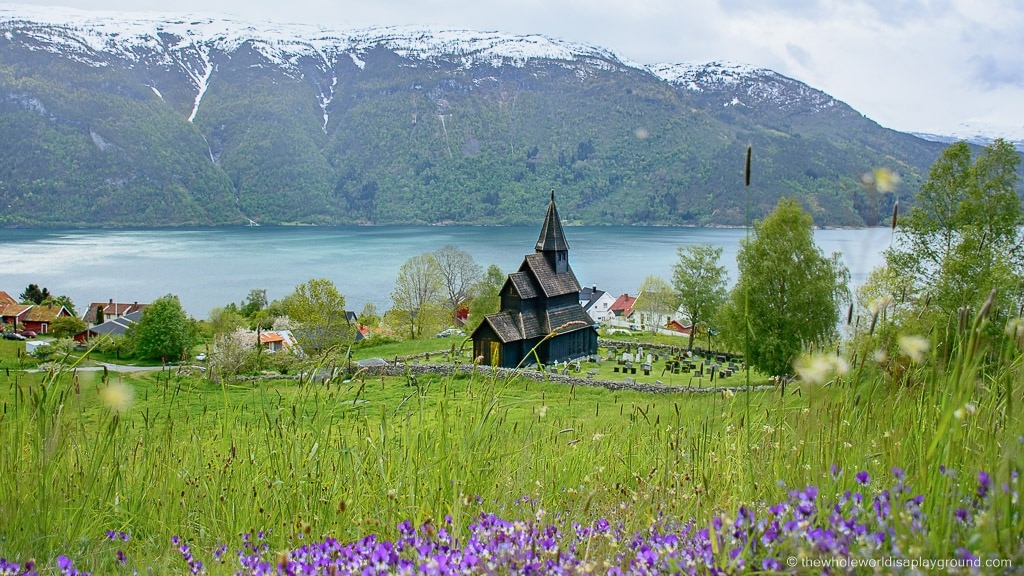 
The UNESCO World Heritage Sites in Norway and the year they were inscribed are:

Time seems frozen in the secluded mining town of Roros. The medieval style town was founded in the 17th Century when copper ore was discovered in the area and the colourful narrow streets and wooden buildings are a designated UNESCO World Heritage site. The UNESCO site includes Roros Mining Town and its industrial-rural cultural landscapes.

UNESCO Norway: Keep an eye out for the UNESCO statue in Roros – it’s among the best UNESCO signs we’ve come across on our travels

28 medieval wooden Stave churches are scattered across Norway and Urnes, tucked away on the shores of the Lustra Fjord and only accessible by car ferry, is inscribed as a UNESCO World Heritage site due to its outstanding example of traditional Scandinavian wooden architecture. It is one of the most beautiful Stave churches in Norway and the serene setting overlooking the fjord is breathtaking.

Located in the scenic city of Bergen, the old quarter of Bryggen is a cluster of stacked wooden buildings originating from the 12th Century which line the city’s waterfront. The wooden alleyways are quaint and inviting and house a mix of boutiques, restaurants, bars and museums. The old wharf is a UNESCO World Heritage Site designated due to its importance to trade and the 62 preserved buildings which remain.

As well as the UNESCO site of Bryggen there are lots of things to do in Bergen and it’s a great place to visit.

The Vega Islands are an archipelago of 6,500 islands, reefs and skerries off the western coast of Norway, just south of the Arctic circle. It is one lesser known of the 8 Norwegian UNESCO sites, likely due to its relatively remote location. One of the key reasons for the UNESCO inscription is the fact that the fishermen and women have inhabited these inhospitable islands in a sustainable way for over 1,500 years. Many of the old traditions are still visible: from the air-dried fish to the traditional fishing boats that were dotted around the many inlets on the island.

Part of the West Norwegian Fjords, Geirangerfjord and Nærøyfjord are among the world’s deepest and longest fjords and are two of the most iconic of Norway’s sights. Surrounded by towering snow-capped mountains the size and scale of the majestic fjords are truly mesmerising. The fjords were designated a UNESCO World Heritage Site due to their exceptional natural beauty in part due to the cavernous walls that rise high above and below the Norwegian Sea.

The UNESCO listed Struve Geodetic Arc is one of a chain of 34 survey triangulations which make up the UNESCO Site. We’d been chasing them around Europe for at least a year and finally managed to tick it off our list close to Vilnius in Lithuania. The Arc passes through 10 countries and represents the first accurate measurement of a long segment of a meridian, stretching over 2,820km. The survey helped establish the size and shape of the planet.

The Rjukan–Notodden Industrial Heritage Site is located in Telemark county in a landscape of mountains, waterfalls and river valleys. The site was created to protect the industrial landscape around Lake Heddalsvatnet and Vestfjorddalen Walley which contains a manufacturing plant producing artificial fertilizer from nitrogen in the air. Designated a UNESCO World Heritage Site in 2015, it stands out as an example of a new global industry in the early 20th century.

Norway’s only prehistoric World Heritage Site, the Rock Art of Alta contains more than 6,000 carvings bearing the traces of a settlement dating from 4,200 BC to 500 BC. The carvings are thought to represent the culture of those who created them and the UNESCO designation recognises the contribution of the paintings and engravings to aiding our understanding of the environment and the human activities in the area in prehistoric times.

If you are planning a Norway visit, check out our Norway itinerary which allowed us to visit 5 UNESCO World Heritage Sites