Angels Landing is an iconic Zion hike and the trail draws thousands of hikers every day. Although the views from Angels Landing itself are incredible, it is the challenging, dangerous and utterly compelling final half mile of the hike that makes this trail remarkable. After navigating the winding West Rim switchbacks and the famous Walter’s Wiggles, the last part of the trail sees hikers scrambling along chains on a narrow rock ridge surrounded by a 1,400 foot drop on either side.

For those of you planning a trip to Zion National Park we wanted to share our experience and tips for hiking to Angels Landing. 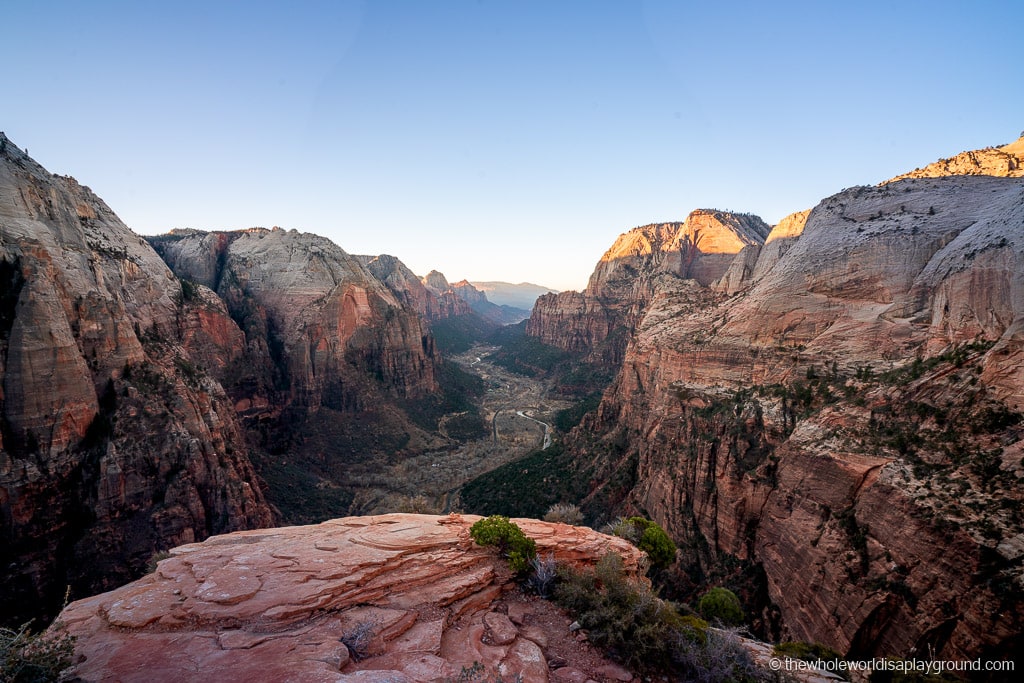 Angels Landing is a popular trail in Zion National Park beside the town of Springdale, Utah. The park is home to the tallest sandstone cliffs in the world and they soar over the Virgin River and the Zion Canyon valley floor.

Angels Landing got its name in 1916, when, exploring the park with three friends, Fredrick Fisher declared that ‘only angels might land on it’ when seeing Angels Landing for the first time.

A combination of the adrenaline inducing trail and the spectacular views of the Zion Canyon from Angels Landing make it one of the best hikes in Zion National Park.

We have put together this map of the Angels Landing trail which includes the main parts of the trail.

How to Use this Google Map: Click on the grey star at the top of the map and this map will be added to your Google Maps account. You can then view it on your phone or computer in Google Maps by clicking on the menu button, going to “Your Places” and selecting this map. We use these maps all the time as you can set out your itinerary ahead of time and quickly reference the saved maps.

Where to stay in Zion

With limited accommodation in the park itself visitors to Zion typically stay in Springdale, a small town next to the south entrance. The Springdale Shuttle connects Springdale to the Zion Visitors Center and the Zion Shuttle so it is just as easy to stay adjacent to Zion and there are more food options in the town.

Angels Landing is a strenuous 5.4-mile hike with steep switch backs, a shaded canyon and an adrenaline inducing final ascent on the Hogsback, the impossibly narrow spine which leads up to Angels Landing.

The views of Zion Canyon are remarkable but the real reward comes from having conquered one of the most extraordinary and dangerous trails in the US. 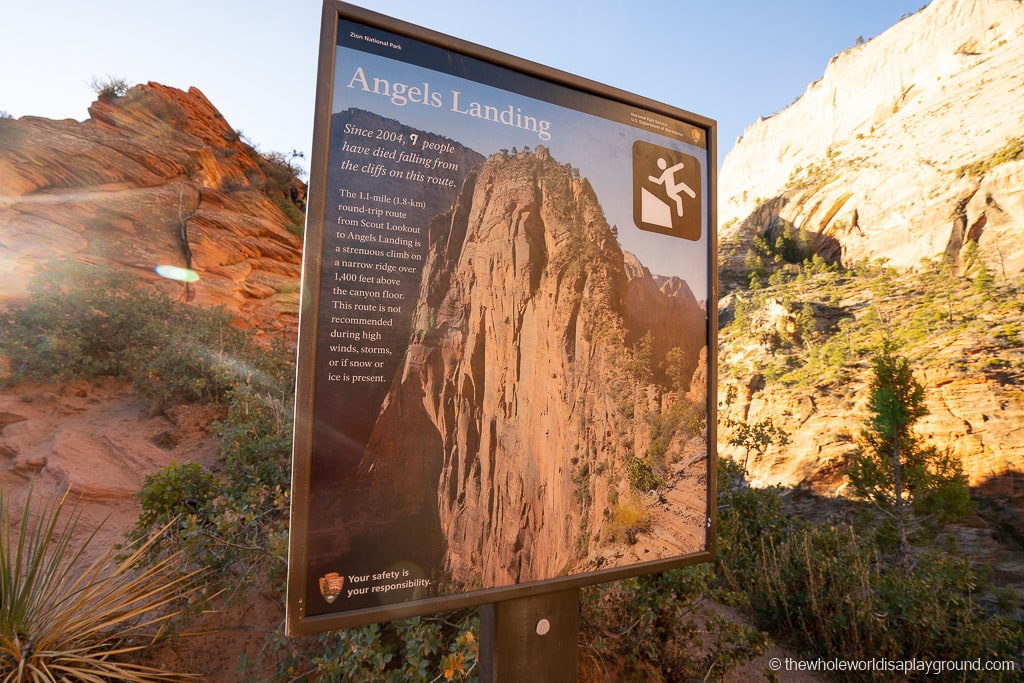 Angels Landing tip: Angels Landing is not for the faint of heart. It should not be attempted by those who struggle with heights or younger kids (up to at least pre-teen depending on hiking competency). The final half mile of the trail from Scout Lookout includes exposed ledges, scrambling along chains and 1,400 foot drops on either side of the narrow ridge leading to Angels Landing. Huge crowds flock to the trail on busy days making it even more challenging. While the hike is manageable, it is dangerous and there have been fatalities on the trail.

The hike to Angels Landings starts at the Grotto, stop 6 on the Zion Shuttle, and follows the West Rim Trail for the first 2 miles to Scout Lookout before branching off to the Angels Landing trail which is the last 0.5 mile stretch of the hike.

After crossing the Virgin River the trail splits into the West Rim trail and the Kayenta Trail. The Kayenta trail leads to the Emerald Pools while the West Rim leads to Scout Lookout and the spur trail to Angels Landing. The iconic Angels Landing rock comes into view almost immediately, jutting over Zion Canyon. 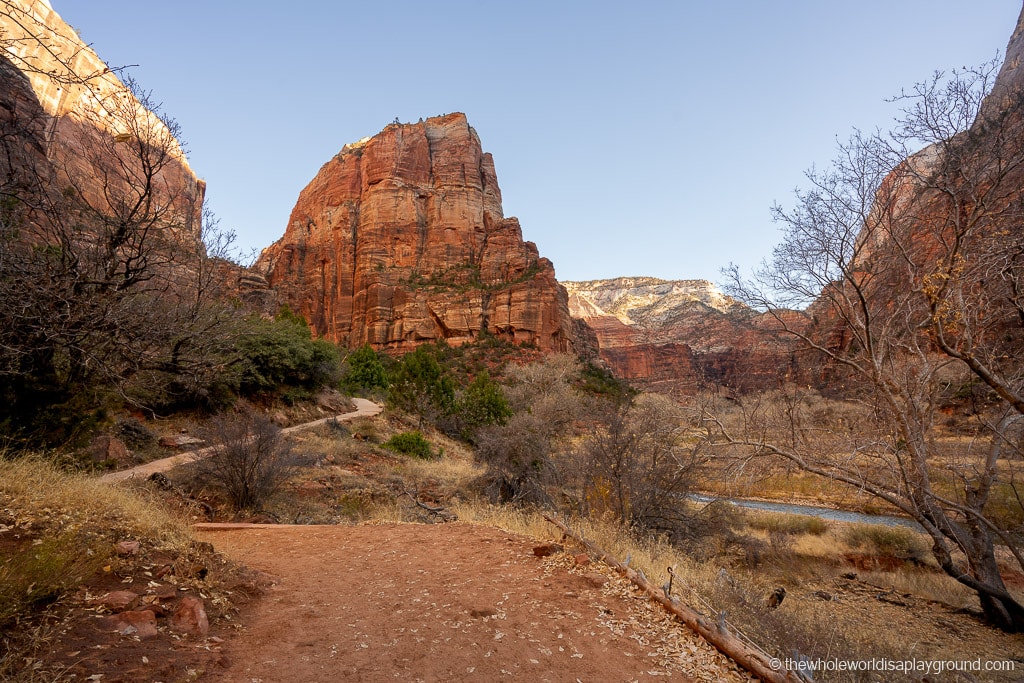 Angel Landing towers over the trail enticing hikers to its summit

As the trail starts to climb up toward the lengthy West Rim switchbacks the views of the park below start to really open up. There are some beautiful viewpoints along this section of the trail before entering Refrigerator canyon.

Angels Landing tip: There are exposed rock ledges on this part of the trail but the path is wide. 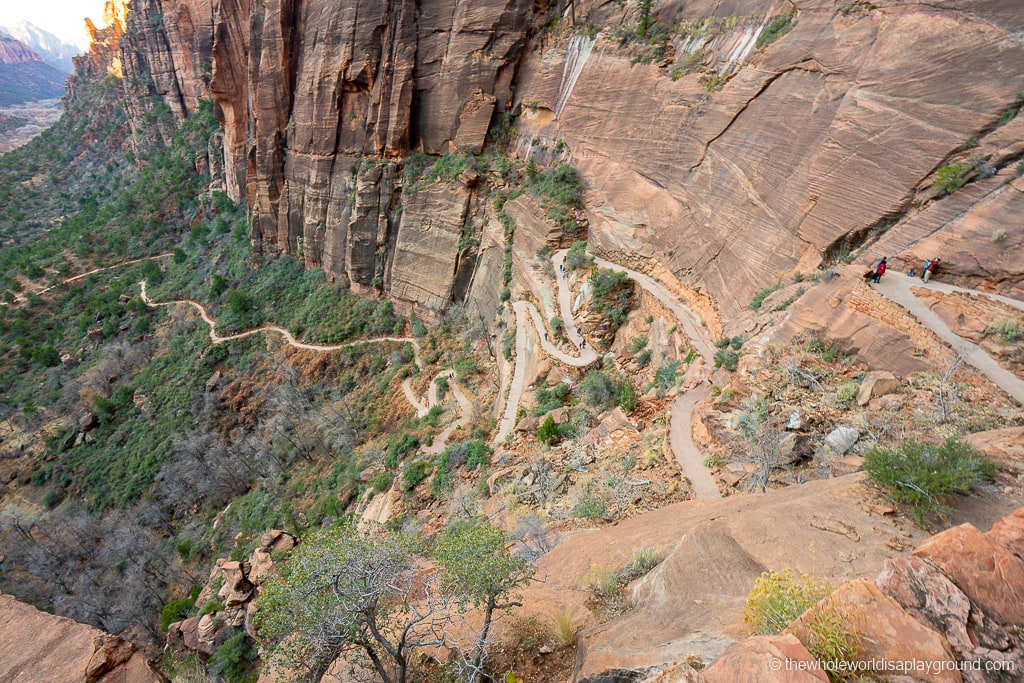 After the switchbacks the trail levels out and leads into a narrow canyon known as Refrigerator Canyon, aptly named due to the cool breeze and shaded paths in the canyon.

Angels Landing tip: Refrigerator Canyon offers the only shade on the entire Angels Landing Hike so it’s a nice break after the climb up the switchbacks 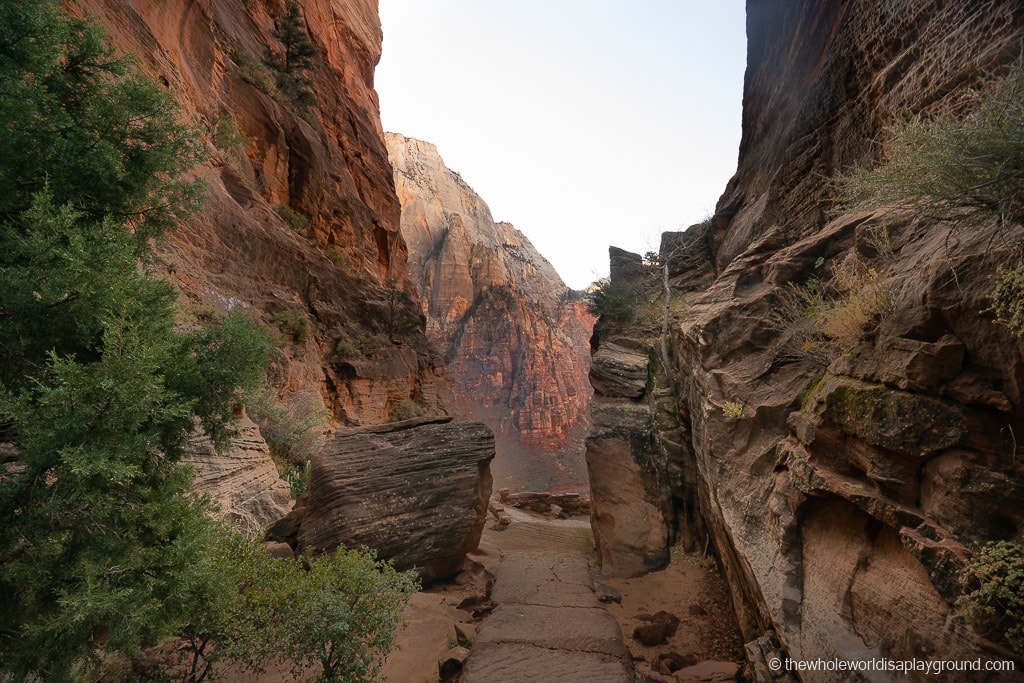 The view from Refrigerator Canyon out to the valley

Refrigerator Canyon leads to one of the most iconic sections of the Angels Landing hike, Walter’s Wiggles. Walter’s Wiggle are a series of 21 short but steep switchbacks. The switchbacks were completed in 1926 in order to provide easy access to the Angels Landing and West Rim trails. They were named after Zion’s first Superintendent, Walter Ruesch, who was responsible for their construction. The dizzying switchbacks are a relentless test of stamina and an incredible part of the trail. 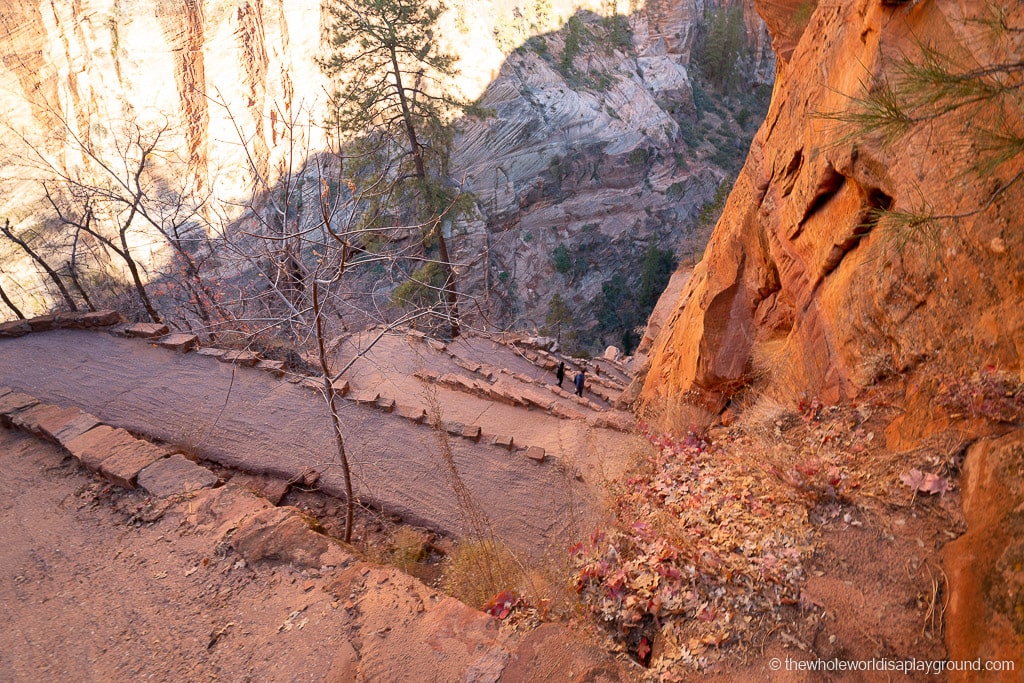 After reaching the top of Walter’s Wiggles you will arrive at Scout Lookout. There are some great views of the Canyon from the lookout: Big Bend, the recent rockfall which closed Weeping Rock, the Virgin River and the incredible rock formations surrounding Zion Canyon are all visible from Scout Lookout. 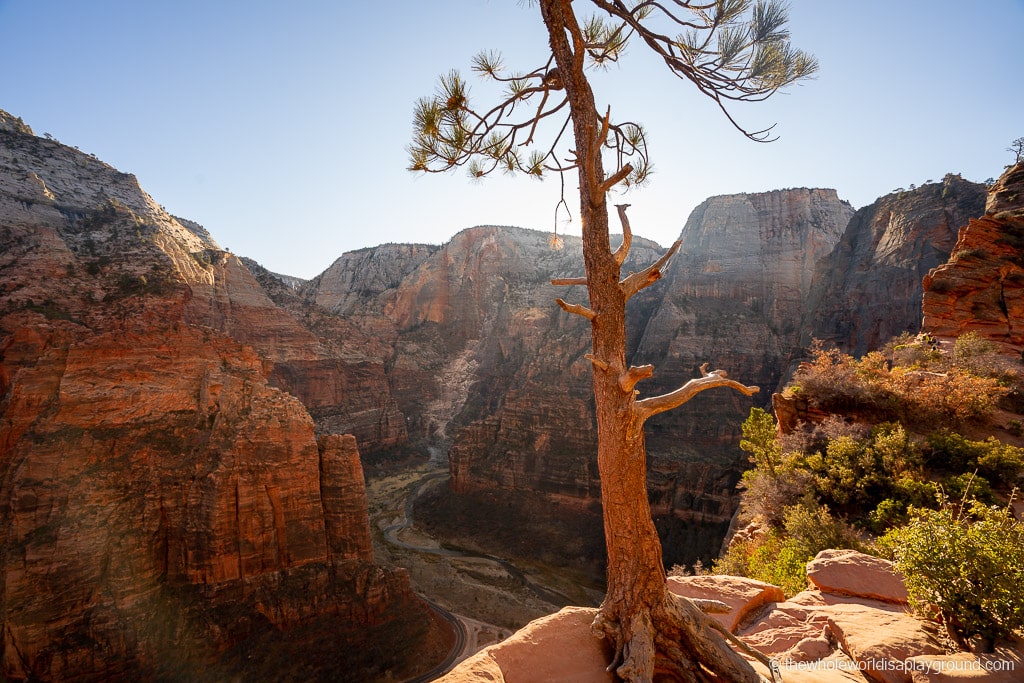 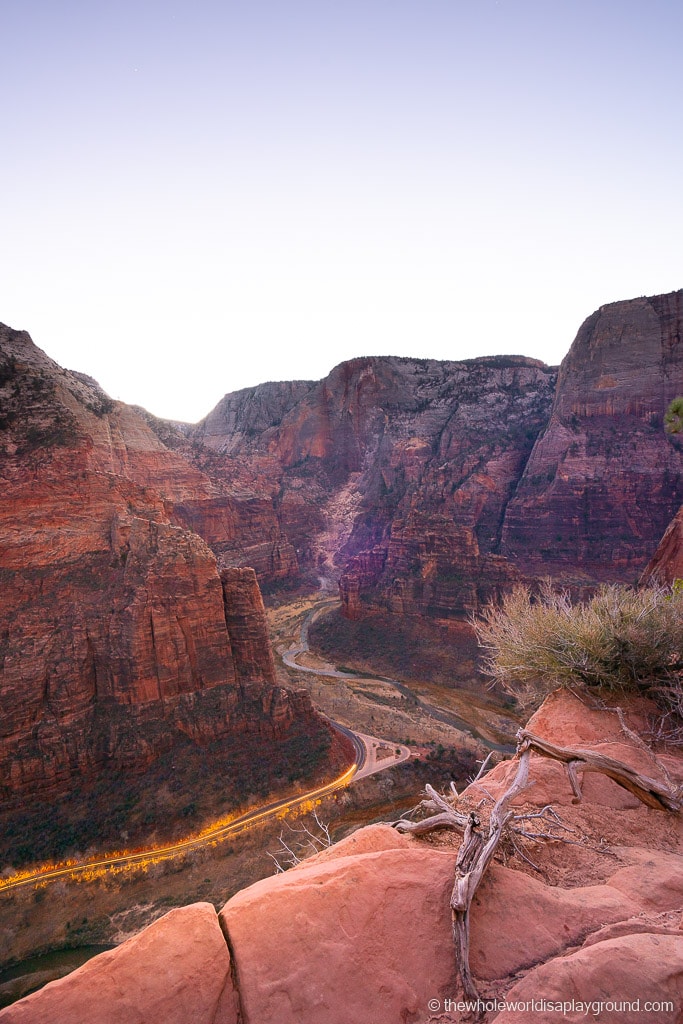 The views from Scout Lookout 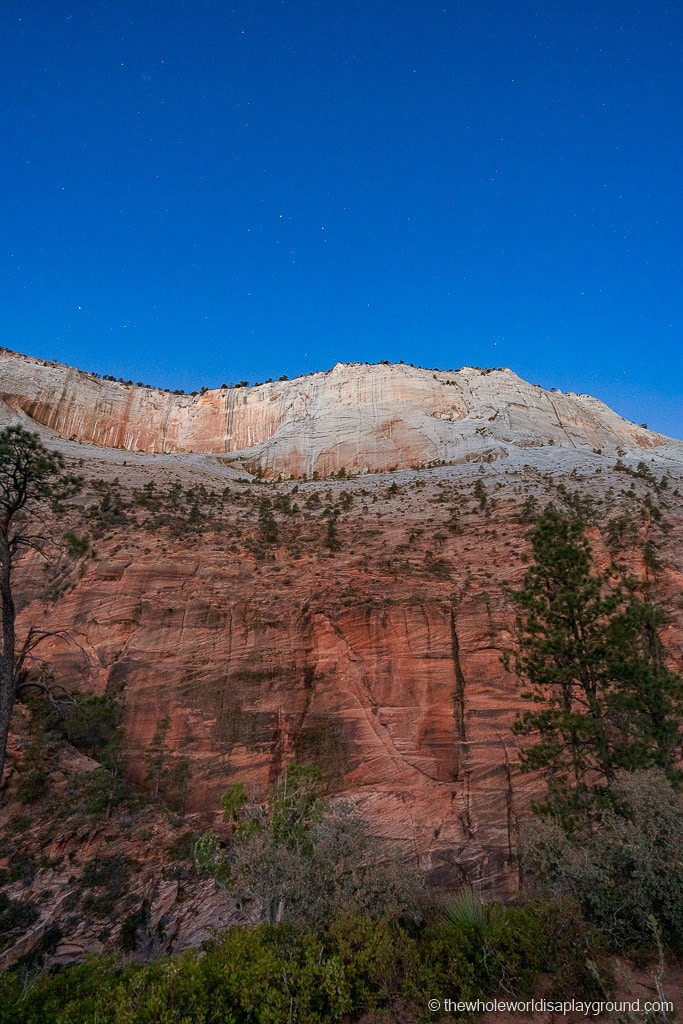 The views across the canyon are remarkable

The spine of Angels Landing looms in the distance, enticing hikers to continue on the trail. 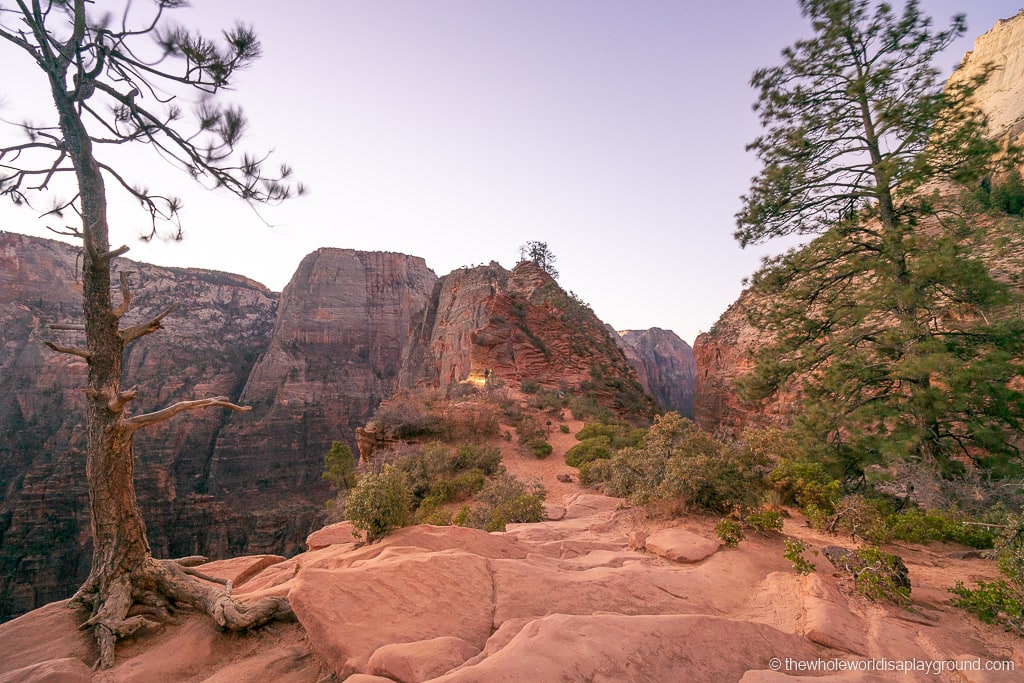 Angel Landing tip: If your hiking group is a mix of Scout Lookout and Angel Landing hikers, a good plan is to assume it will take an extra 1 to 1.5 hours to hike to Angels Landing and make it back to Scout Lookout. If you want to make the descent together then venture further out on the West Rim trail while you wait. On our most recent visit to Zion Elaine continued along the West Rim with our young kids while I made the final approach to Angels Landing and we met up to hike back to the Grotto together after about 90 minutes.

After Scout Lookout it is a relatively straightforward hike across the saddle until you reach Hogsback. Hogsback is the steep, narrow section with chains which has massive drops on either side and is often referred to as the spine. At some points it is just a few feet wide.

Angels Landing tip: you really need to be comfortable with heights and exposed edges as one wrong step here could be fatal. 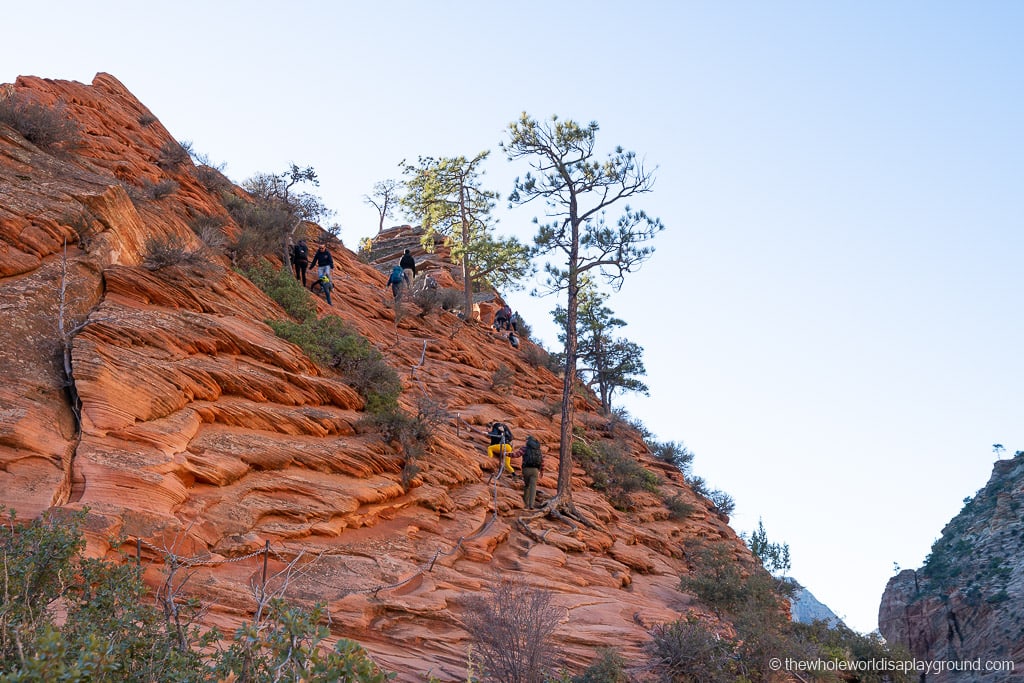 The start of the spine after Scout Landing

After the initial scramble up from Scout Landing, hikers are introduced to the Angels Landing chains and exposed ledges. 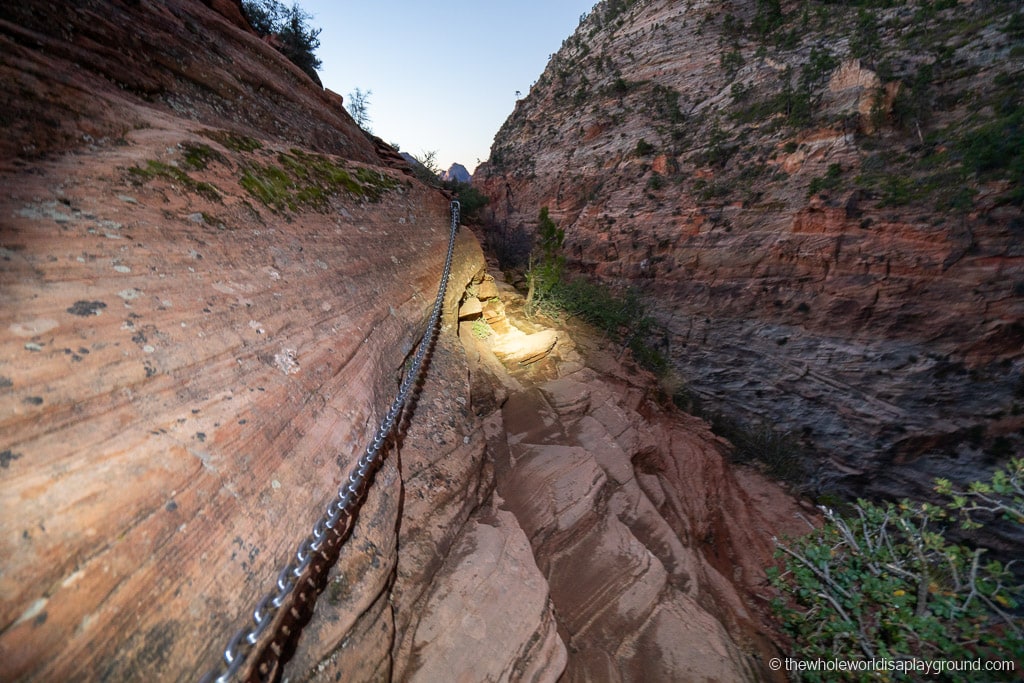 Parts of the trail have 1,000 foot drops into the canyon

The trail narrows and becomes a single track which weaves from one side of the spine to the other as hikers make their way up to Angels Landing. 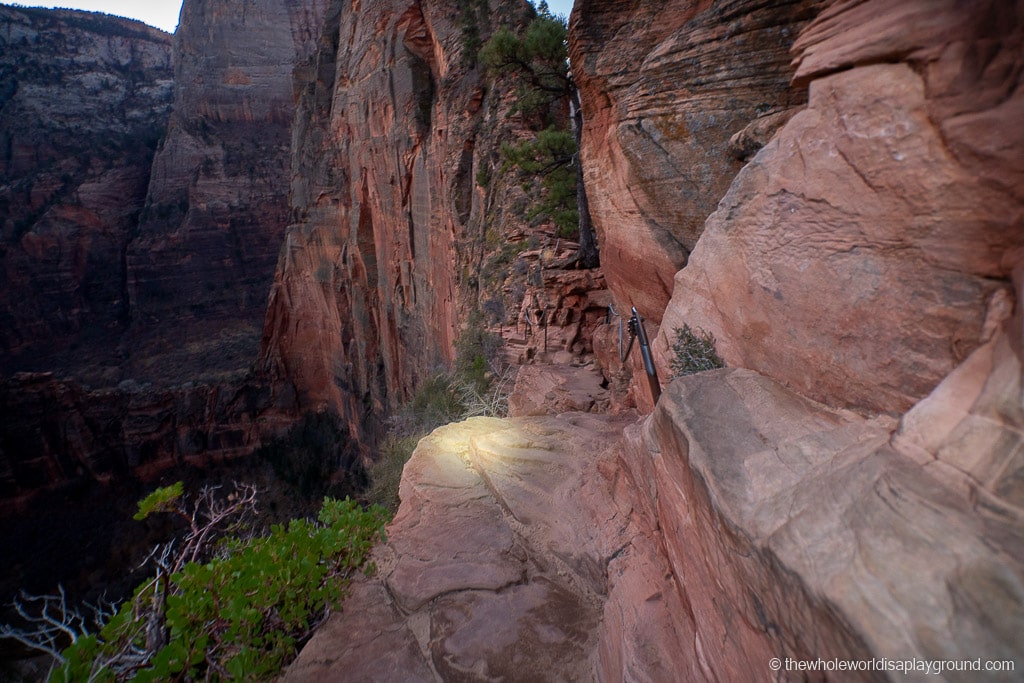 I hiked this section very early in the morning and the quiet trail made for an incredible experience. On my descent, the trail was busier and the chain sections were really busy. It was much slower coming down as a result. 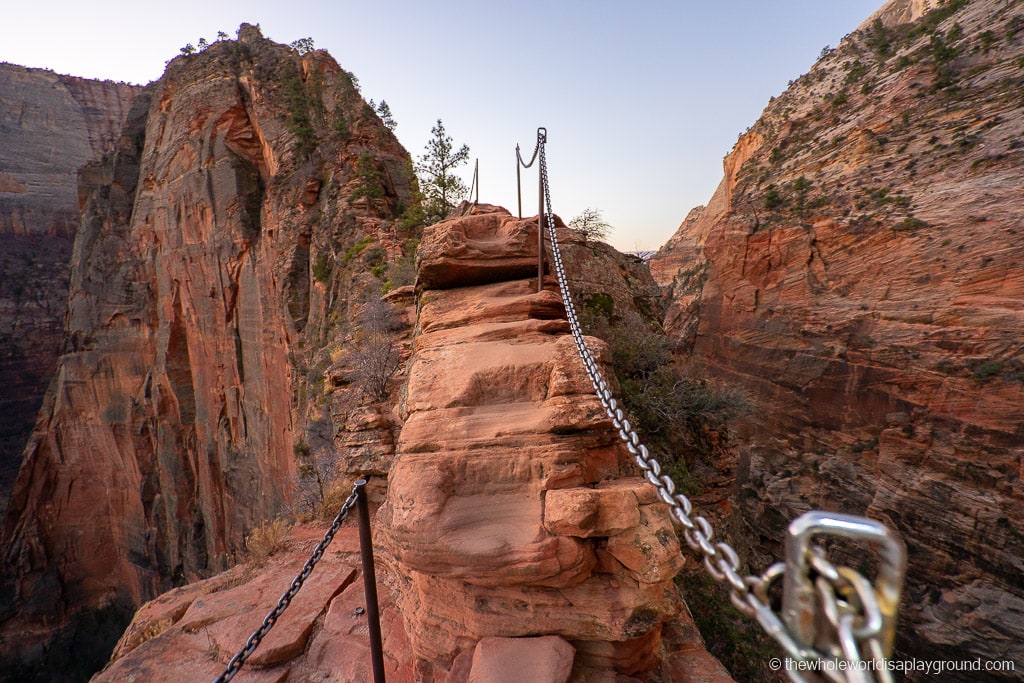 The narrow sections of the spine are incredible! 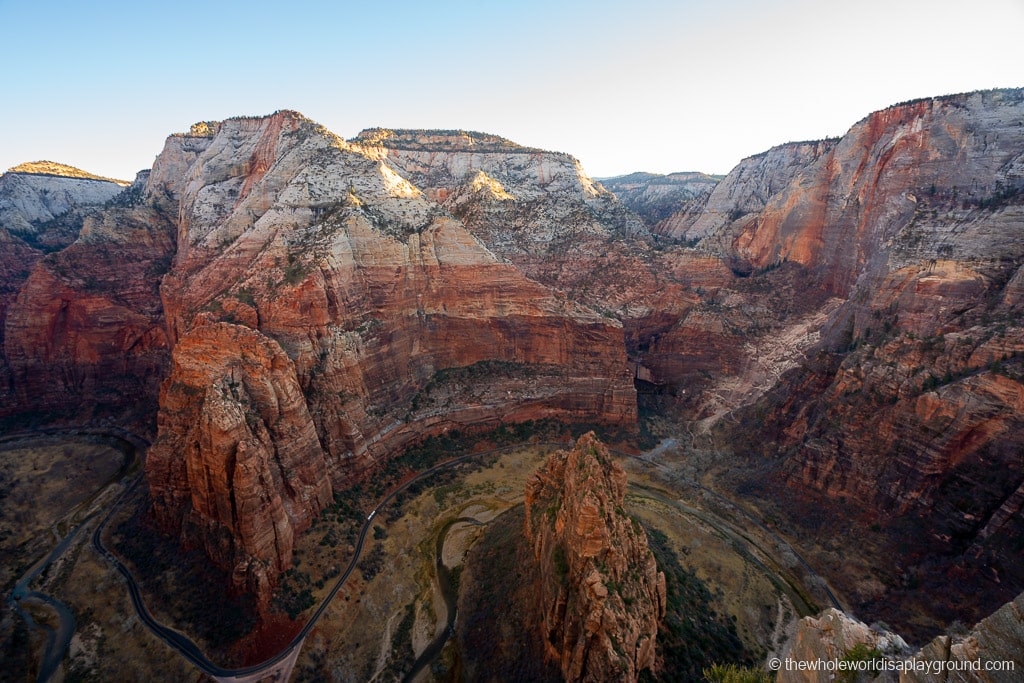 The views of Big Bend from the spine are spectacular

Chains have been bolted into the rock to assist hikers in navigating the steep sandstone rock on the Hogsback spine safely. As well as being strenuous, the chains are often one of the most time-consuming parts of the trail: at most points on the chains only a single hiker can safely navigate and this creates bottlenecks. 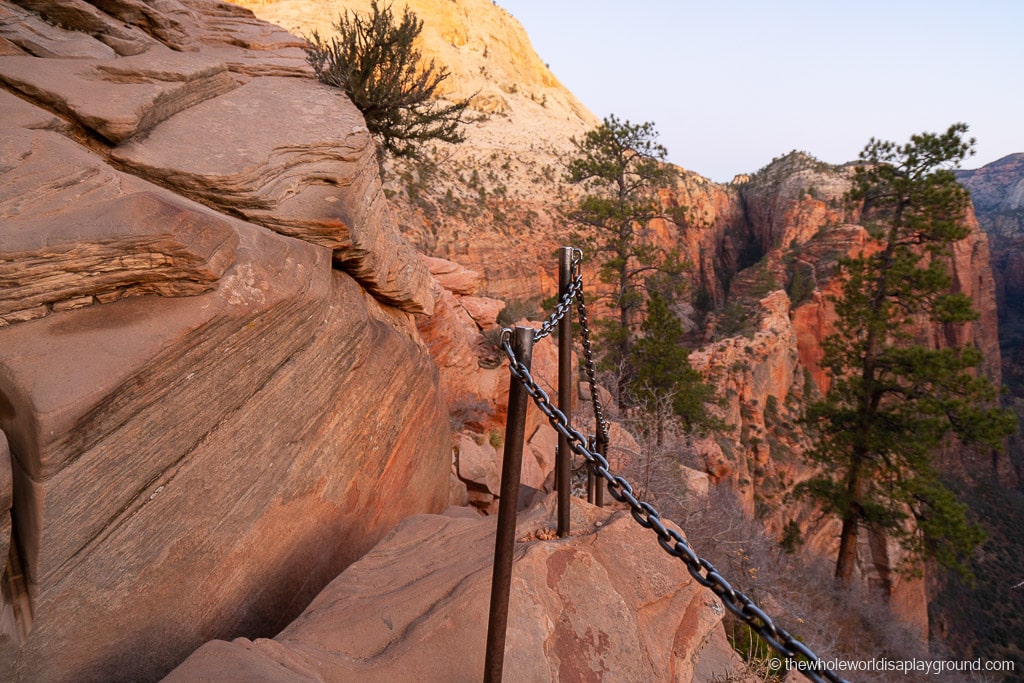 Angels Landing tip: the sandstone is really slippery when wet so the trail should be avoided after rain. If you are hiking in winter, we highly recommend throwing a pair of YakTrax in your day bag. YakTrax are hiking spikes that you clip onto your hiking trainers or boots and give you extra grip on wet or icy ground. We used ours on all our winter hikes in Utah and found them amazing. 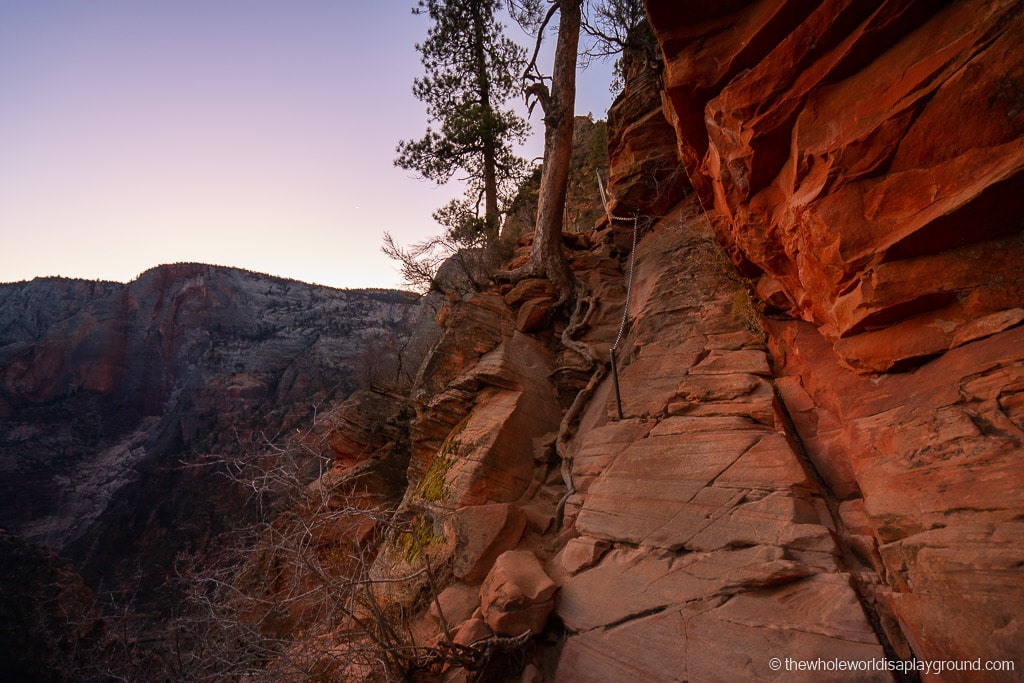 Navigating the chains on Angels Landing

The narrow section of the spine the trail widens as hikers scramble up towards the summit of Angels landing. 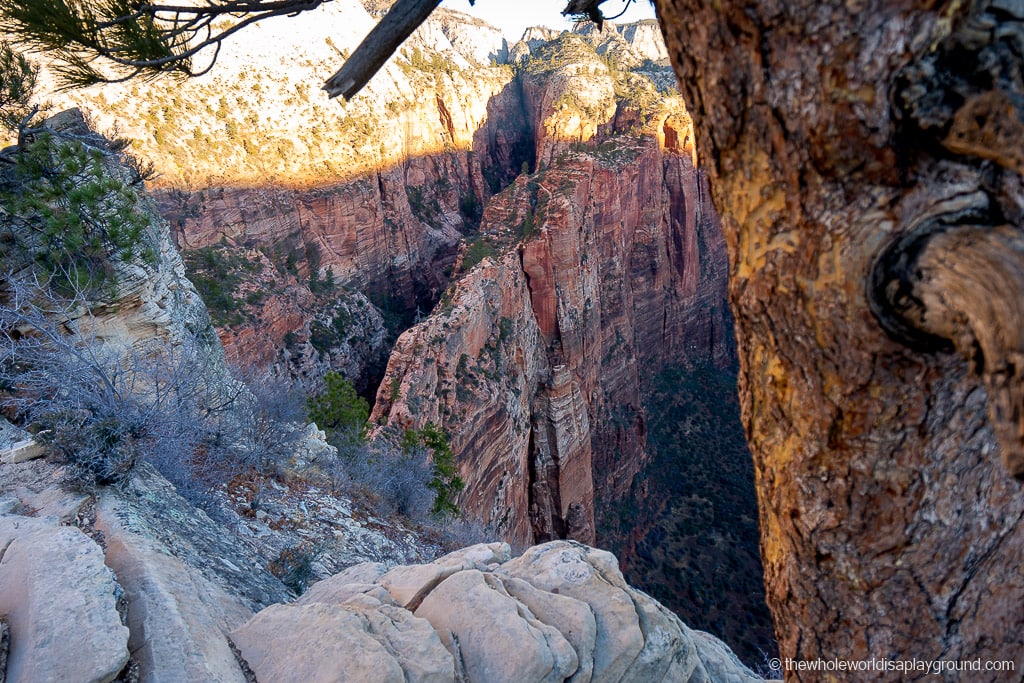 After conquering the Hogsback, the final part of the trail is known as the Landing where hikers are rewarded with breath taking views over Angels Landing. Angels Landing is at 5,790 feet elevation and the panoramic views of Zion Canyon are incredible.

The incredible view from the summit of Angels Landing

There is no doubt that Angels Landing is a difficult trail that requires extreme care, especially on the final half mile ascent to the Landing.

At some points the Hogsback spine narrows to a few feet, and at times, hikers have to pull themselves up parts of the trial and stand aside for passing hikers. There is a 1,000 foot drop into the canyon on either side of the spine so one wrong step can be fatal.

However, the hike is very manageable when conditions are good and hikers take extreme care on the trail. Thousands of hikers successfully complete the hike to Angels Landing every day. That is not to say it is not without its dangers. There have been deaths recorded on the trail: the National Parks Service have noted 9 accidental deaths on Angels Landing. 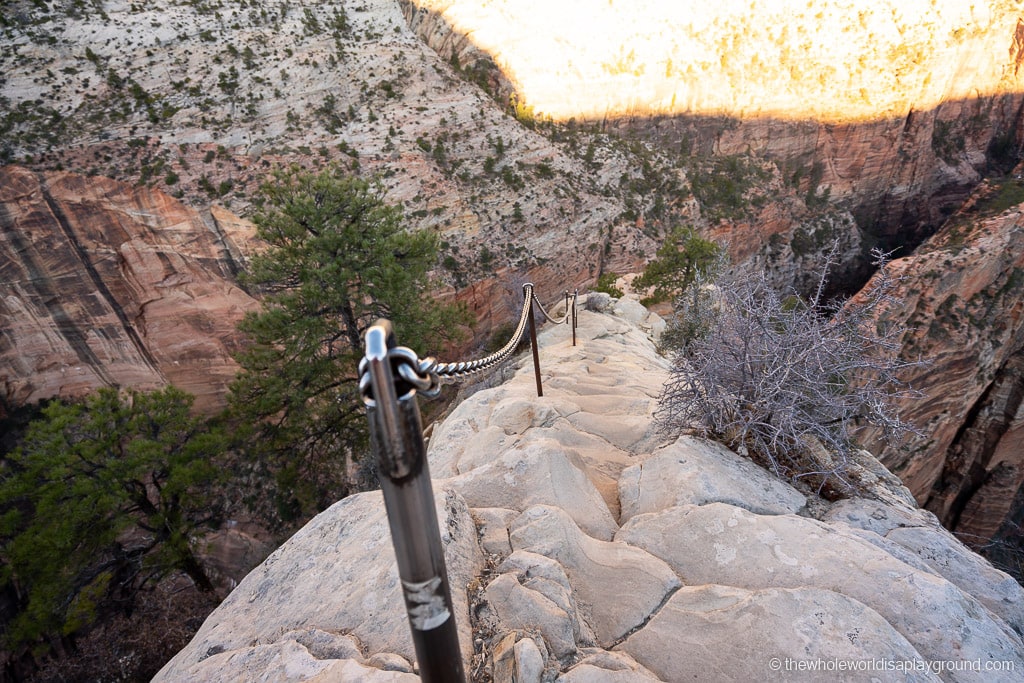 Extreme care is needed on the Angels Landing trail

Angels Landings is one of the most difficult hikes in Zion National Park and should only be attempted with older kids (probably at least teenage years) who are competent hikers and have no issues with heights. However, kids of all ages can make it as far as Scout Lookout.

Angels Landing tip: we took our 2 year old and 9 month old to Zion on our most recent trip. I did the Angels Landing hike: Elaine and the kids accompanied me to Scout Lookout and they explored a little of the West Rim while I went up and back to Angels Landing. We wouldn’t recommend attempting the full Angels Landing trail with kids in a hiking backpack.

Angels Landing tip: On our last visit, I started the Angels Landing hike around 2 hours before sunrise so most of the hike up Scout Lookout was in the dark. It was an incredible and surreal experience. 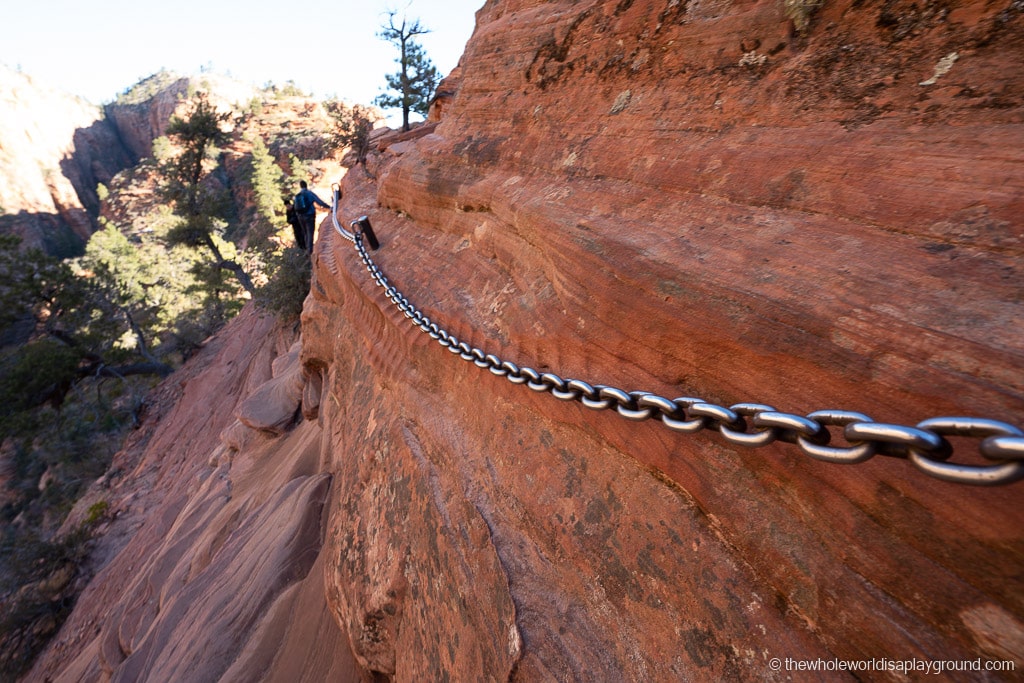 Hikers need to be comfortable with heights when attempting Angels Landing

Zion National Park is home to some iconic hikes and we love exploring its trails. Some great hikes in addition to Angels Landing are: 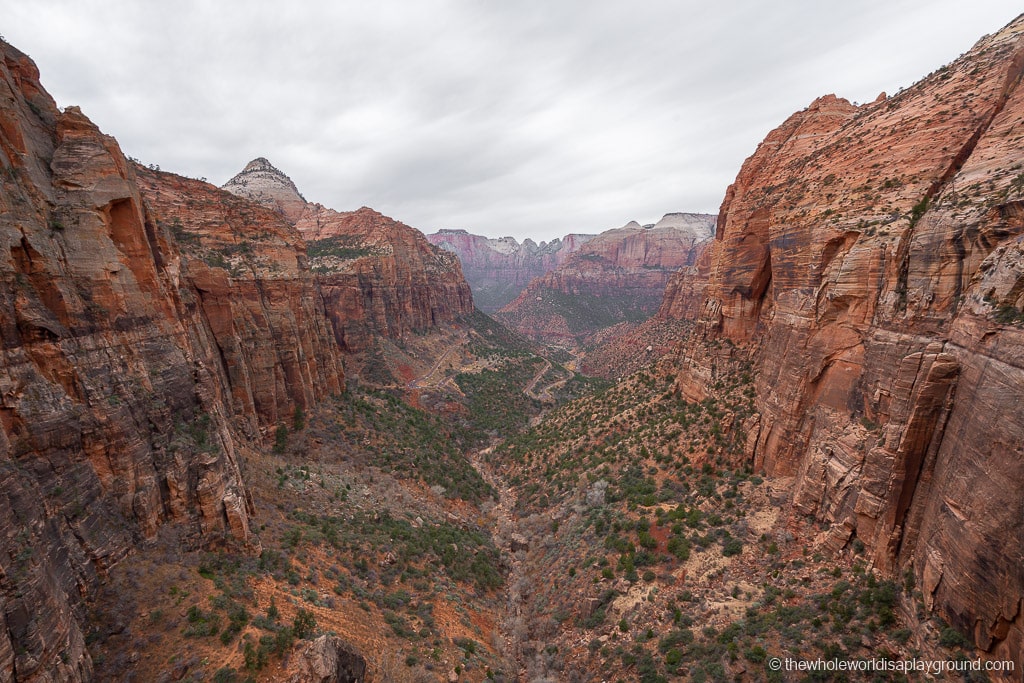 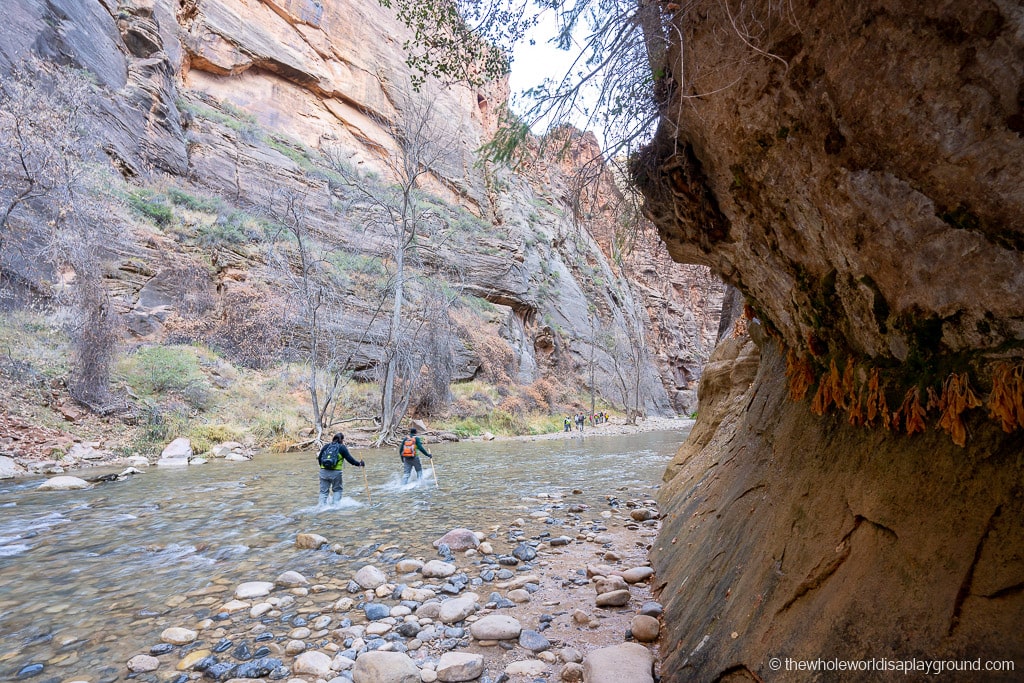 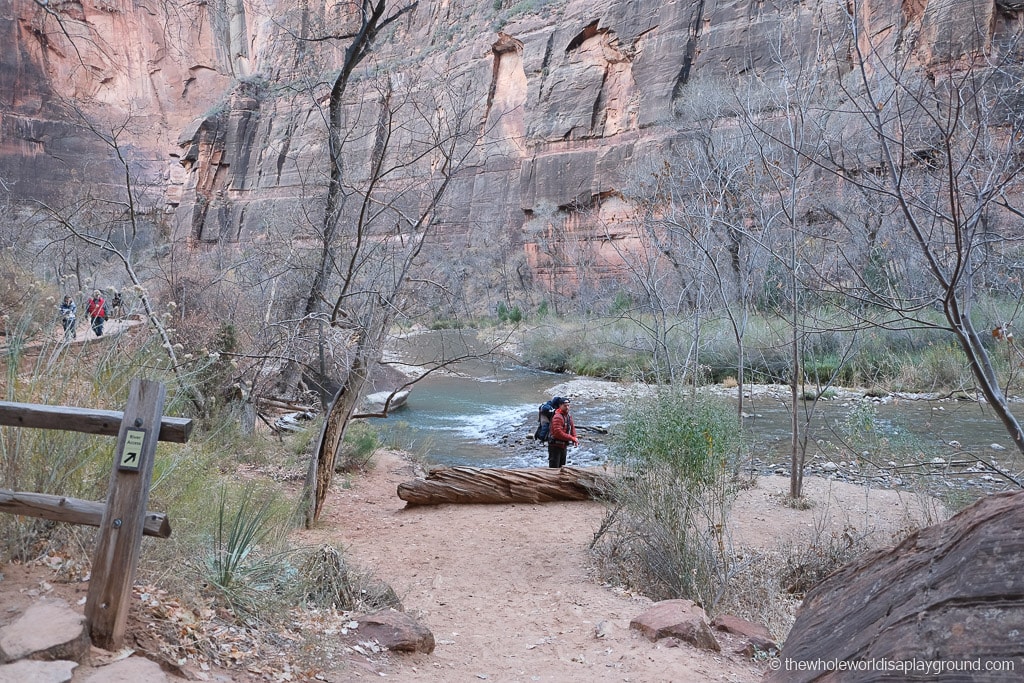