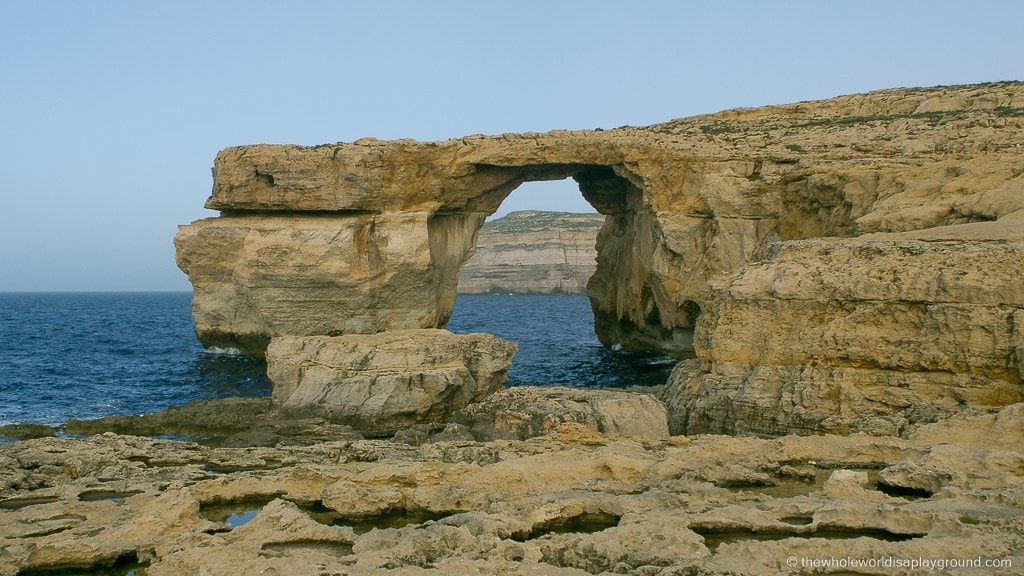 For a tiny island there are a surprising variety of fun and interesting things to do in Gozo. We loved its prehistoric temples, beautiful beaches, dramatic coastline and compelling history. After exploring Gozo during our visits to Malta, we’ve put together our sightseeing guide to Gozo: it’s a guide to our 9 best things to do in Gozo and the best sights on the island. Enjoy!

Best Things to do in Gozo

From the UNESCO listed Temple of Ggantija to the beautiful Wied il-Mielah Sea Arch, these are our favourite things to do on Gozo.

Check out our Malta itinerary to plan these sights into your Malta trip.

Gozo has a long history: it was first settled around 5500BC and its people began to build and carve in stone creating temples, statues and burial complexes by 3600BC. The two prehistoric temples of the Ggantija Temple complex in Gozo are described as the oldest free-standing monuments on Earth, dating further back than Stonehenge and the Egyptian Pyramids. With stones weighing up to fifty tonnes used in the construction of the prehistoric temples the gigantic Bronze Age structures were believed to have been built by giants. Together with five temples on the Island of Malta the Temples of Ggantija were declared a UNESCO World Heritage Site and are listed as the Megalithic Temples of Malta.

Read more about the UNESCO World Heritage sites in Malta.

2 | Take a boat tour of the islands

One of the most popular ways to visit Gozo is on a boat sightseeing cruise from Malta. There are many available and the most popular is the full-day Bugibba cruise which includes the islands of Gozo, Comino and the Blue Lagoon. You’ll have 3 hours to explore Gozo as well as time at the Blue Lagoon and the crystal lagoon during the summer months – check prices now!

The Ghasri Valley is a picture-perfect narrow creek that begins at Ta’ Dbieġi Hill, passes by traditional farmhouses and winds down to meet the sea between narrow cliffs through a winding inlet. The waters are turquoise blue in the creek and it is the perfect spot for a cooling swim in the sea. The valley is popular with divers and snorkelers due to the underwater caves as well as sunbathers who congregate on the secluded and tiny pebble beach.

Malta’s national shrine to the Virgin Mary, the Basilica is dedicated to the Blessed Virgin of Ta’ Pinu and is one of the most visited places in Gozo. It became a place of pilgrimage when, in 1883, the Virgin Mary is said to have spoken to a local woman and the painting from which the voice is said to have come still remains in the church today. There have been many miracles attributed to the church and inside walls and cabinets are filled with offerings including helmets, baby clothes, photos and plaster casts.

The Basilica is an architectural masterpiece and dominates the surrounding countryside. On the hill opposite, 14 marble statues representing the Stations of the Cross lead to its summit and make for an enjoyable walk.

Things to do in Gogo tip: make sure knees and shoulders are covered when visiting the church.

Dwerja Bay was home to Gozo’s most famous sight, the Azure Window, before the sea arch succumbed to the elements and collapsed into the sea after heavy storms in 2017. Even in the absence of the Azure Window, Dwerja Bay is still worth a visit today. The Bay is home spectacular sights including Fungus Rock, the Dwejra Tower, the Inland Sea and the Blue Hole and was the setting for a key scene from Season 1 of Game of Thrones.

When exploring Dwejra Bay make sure to check out:

Gozo things to do tip: Dwerja Bay was the setting for one of the most memorable Game of Thrones scenes from season 1, the Dothraki wedding feast between Khal Drogo and Daenerys Targaryen on the coast of Pentos in Episode 1, ‘Winter is Coming’. Although the Azure Window featured heavily in the episode it is still possible to visualise the wedding scene across the beautiful landscape.

Located in the village of Xaghra, the Ta’ Kola Windmill was built in 1725 and is one of Malta’s few surviving windmills from the Knights’ Period. The windmill is now a museum and the round tower is surrounded by rooms including the miller’s living quarters which have been restored. Entrance is included in the ticket price to the close by Ggantija Temple complex and it’s an interesting glimpse of days gone by.

Victoria, or Rabat as its known to locals, is the capital and the heart of Gozo. The Citadel, which dates back to the Middle Ages, is its main attraction and the fortress is visible from all over Gozo. The first fortifications were built in 1500 BC and some parts of the Citadel are remarkably well preserved: the Courts of Law and the Governor’s Palace are still used as Gozo’s law courts and the cathedral is a highlight. The views are stunning and the narrow streets and steep walls a step back in time.

Gozo is surrounded by beautiful waters and, if you need some beach time, Gozo has some idyllic swimming spots. Ramla Bay is Gozo’s only sandy beach option and Hondoq Bay, Xwejni Bay and Qbajjar Bay are nice swimming spots.

Gozo things to do tip: if you stop by Ramla Bay make sure to visit Calypso Cave which overlooks the beach. Calypso Cave is believed to be the cave Homer refers to in `The Odyssey’ where Calypso kept Odysseus as a prisoner of love for seven years.

The salt pans on Gozo’s north coast are an interesting site. A checkerboard of square blocks is cut into the limestone rock and the pans are filled with salt water. The water evaporates leaving the natural sea salt which is harvested over the summer months. A local man, Leli, tends to the salt pans and sells the sea salt to visitors to the site.

For more on Malta travel:

Check out our other Malta articles which include: