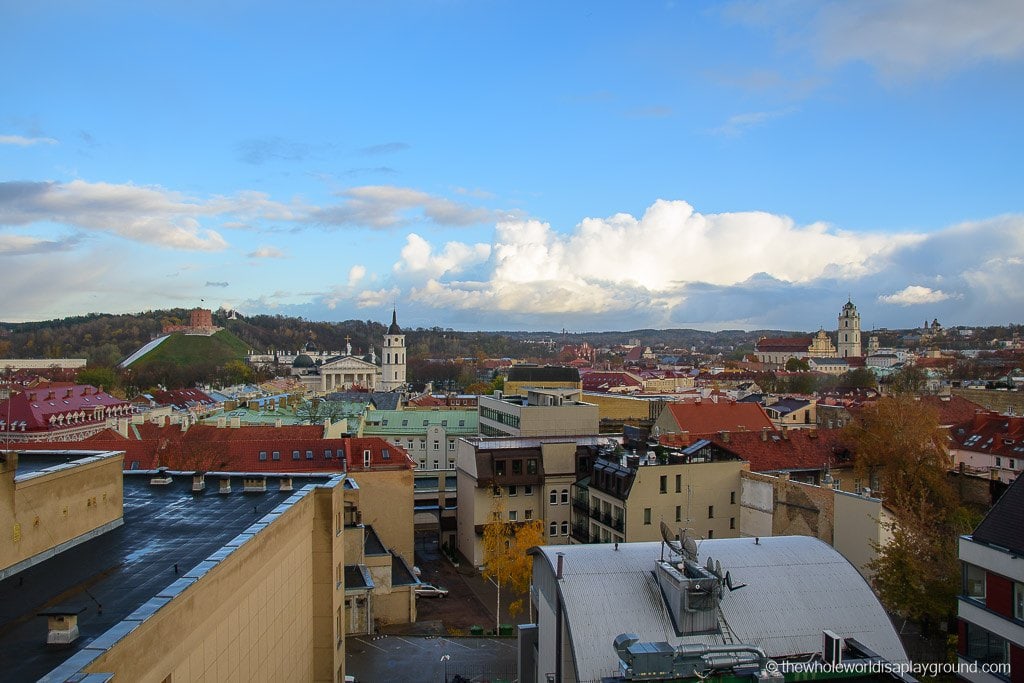 With its stunning architecture, sprawling Old Town and compelling history Vilnius is a Baltic gem. The Old Town, Europe’s largest, features at the top of every list of things to do in Vilnius and houses many of its best sights. Low prices and a laid back Eastern European charm make it the perfect weekend destination and we loved our time in the city. Here’s our lowdown on the best things to do in Vilnius to help you plan your trip! 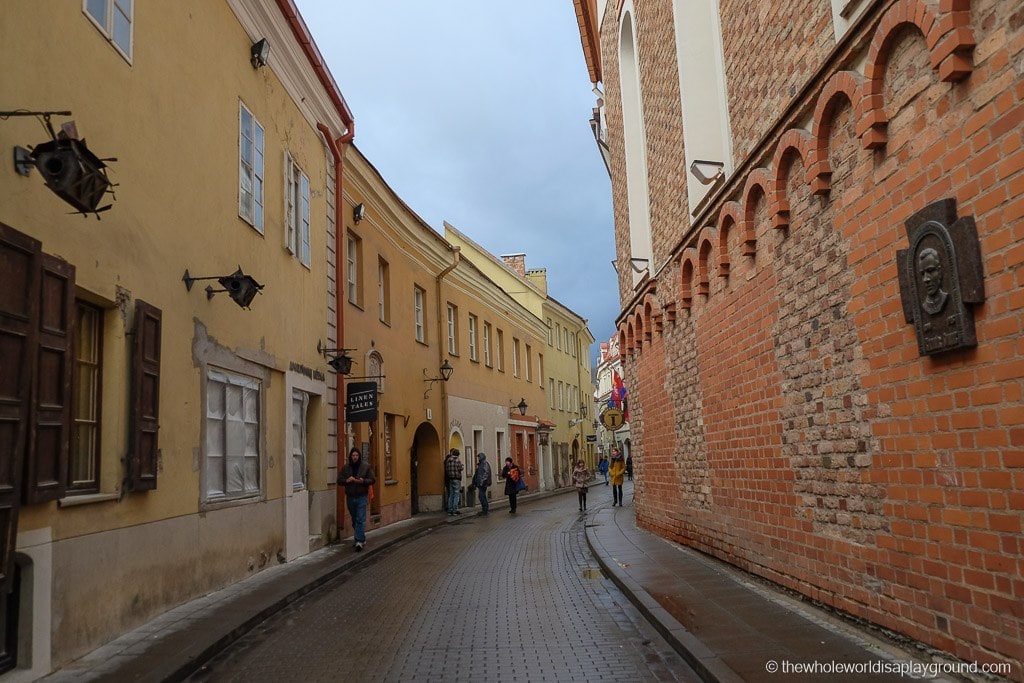 The UNESCO World Heritage inscribed Old Town of Vilnius is filled with historical buildings, winding cobblestone streets and quaint bars and restaurants. Its picturesque streets are packed with history and beautiful architecture. Exploring the Old Town and soaking up the atmosphere is one of our favourite things to do in Vilnius! 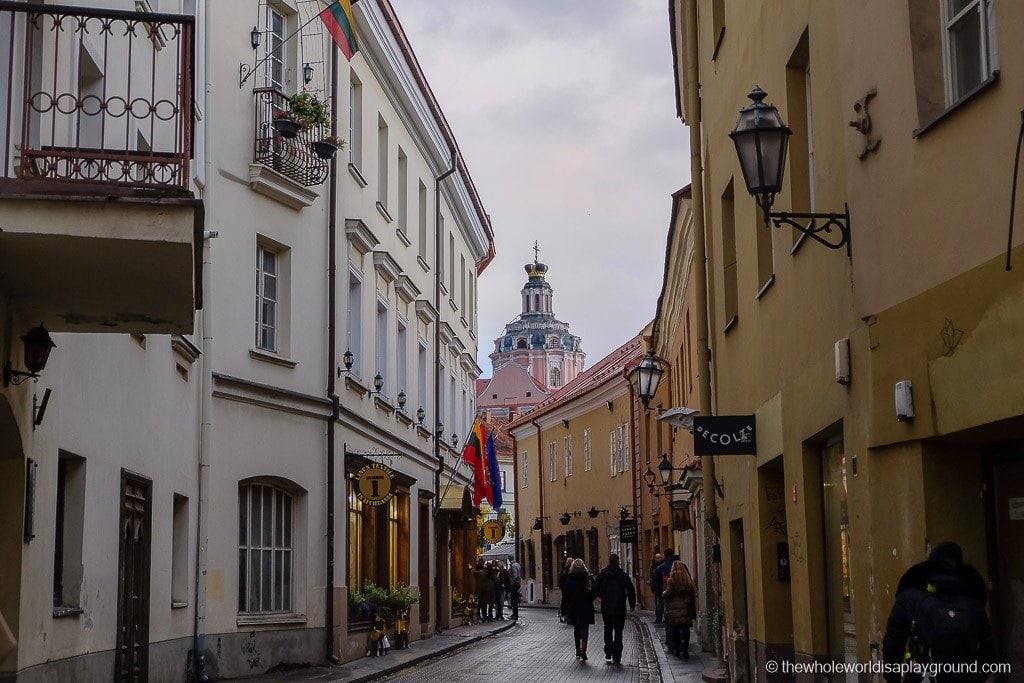 We recommend staying as close to the old town as possible as this will give you the best opportunities for exploring this beautiful part of Vilnius.

Things to do in Vilnius Old Town

Many of the best things to do in Vilnius are located within its Old Town.

The official residence of the President of Lithuania, the Classical style Presidential Palace is located in Daukantas Square. The grand building has housed bishops and governors and has received many high profile visitors including Napoleon Bonaparte within its walls.

Vilnius sightseeing tip: it’s possible to visit the inside of the Palace when advance reservations are made 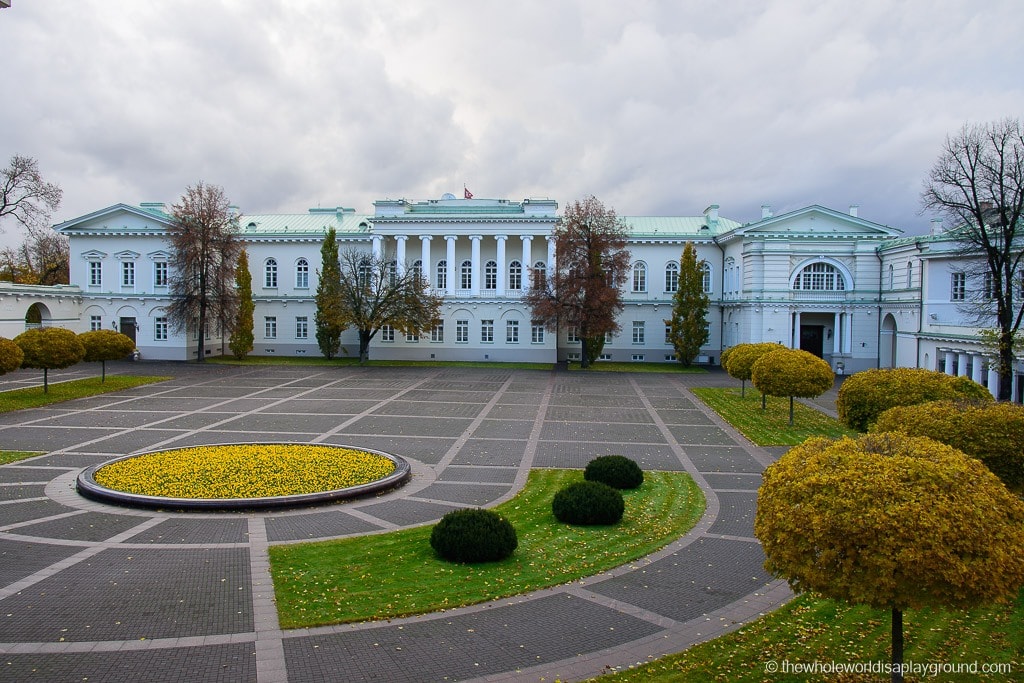 Built in the early 16th Century, the Gate of Dawn is the only surviving gate from the five which made up the original city wall. The Gate of Dawn houses a small chapel with a painting of the Blessed Virgin Mary and is visited by pilgrims all over the world in honour of the miraculous powers it’s said to hold. 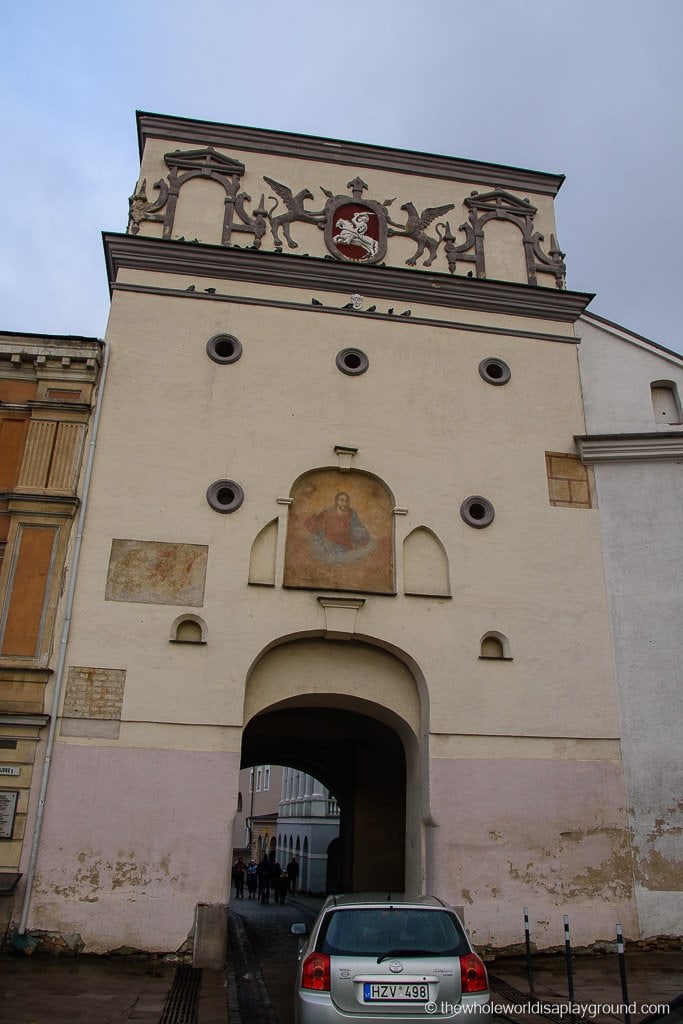 The Old Town is filled with beautiful and historic buildings and our favourites were Vilnius Cathedral, the Town Hall and the Palace of the Grand Dukes of Lithuania. 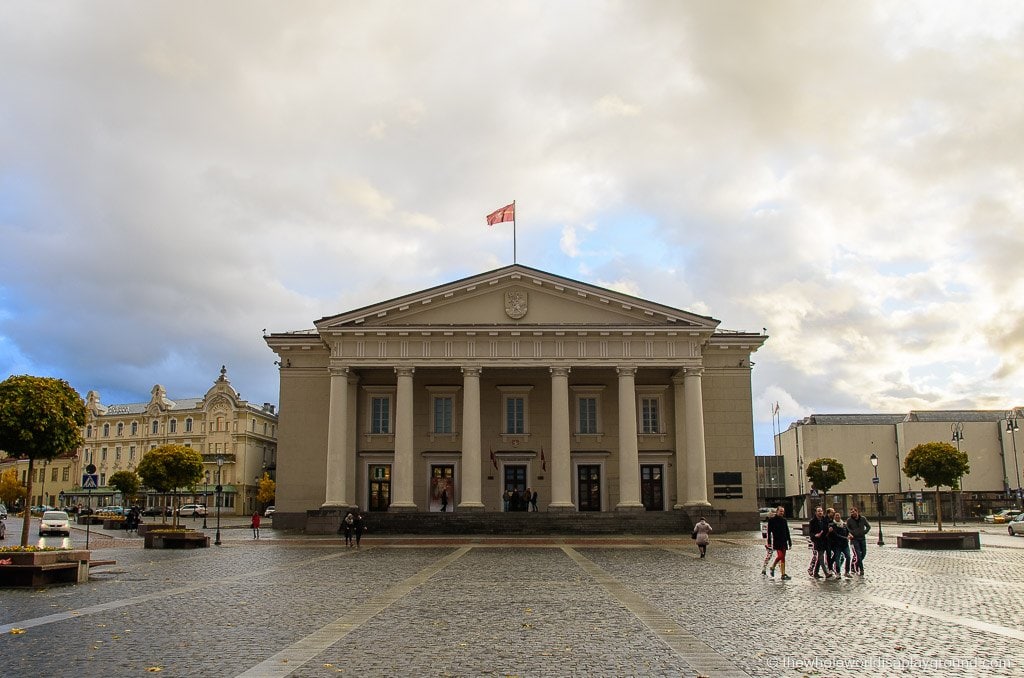 One of the quirkiest sights in the Old Town of Vilnius, the bronze statue depicts a naked lady riding a bear! 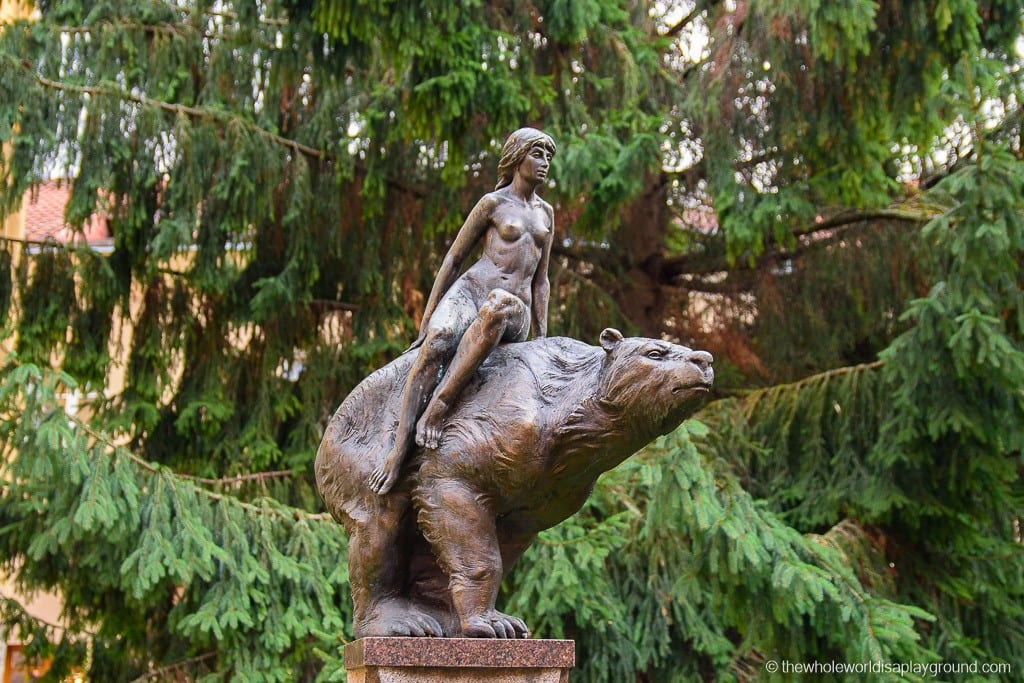 6 | The Church of Saint Anne

On the right bank of the River, the Church of St Anne is a Gothic masterpiece. It is one of the most famous Old Town landmarks contributing to its UNESCO World Heritage status and has survived over 500 years. Legend has it that Napoleon was so fascinated by its beauty that he wanted to take the Church back to Paris in the palm of his hand. 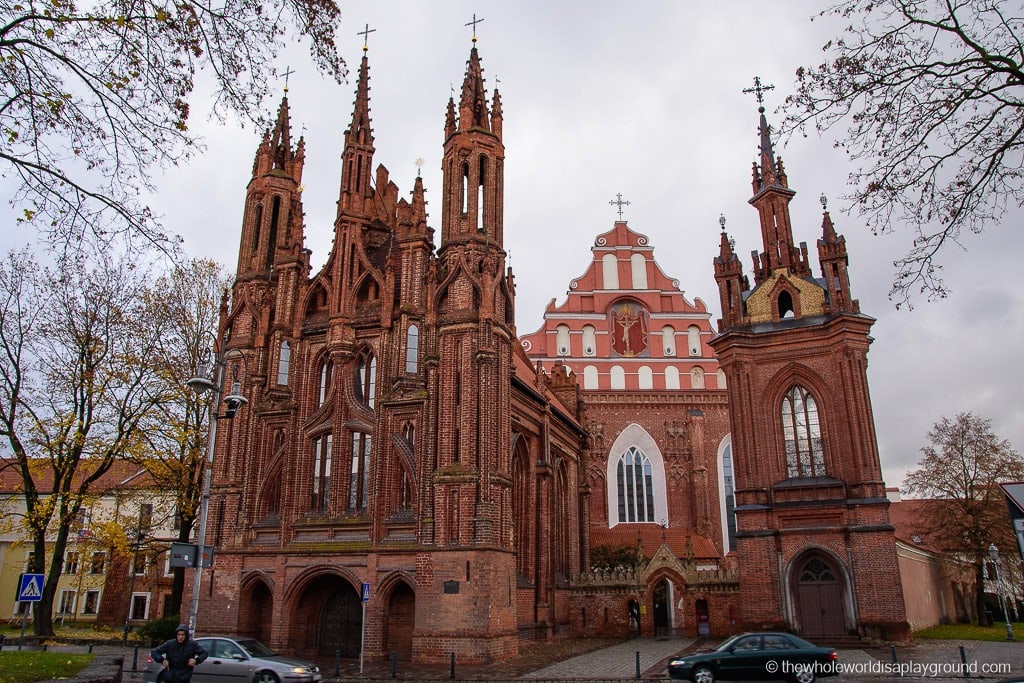 The Museum of Genocide Victims is located in a former gymnasium which became the headquarters of the Gestapo during the Nazi occupation in 1941 and offers a glimpse into the city’s dark past. The building was later used by the KGB and over 1,000 prisoners were executed in its basement and the cells are the same today as when the KGB left them upon leaving Lithuania in 1991.

Alumnatas Courtyard boasts both spectacular views of the Presidential Palace and an elephant statue propping up a chess board! 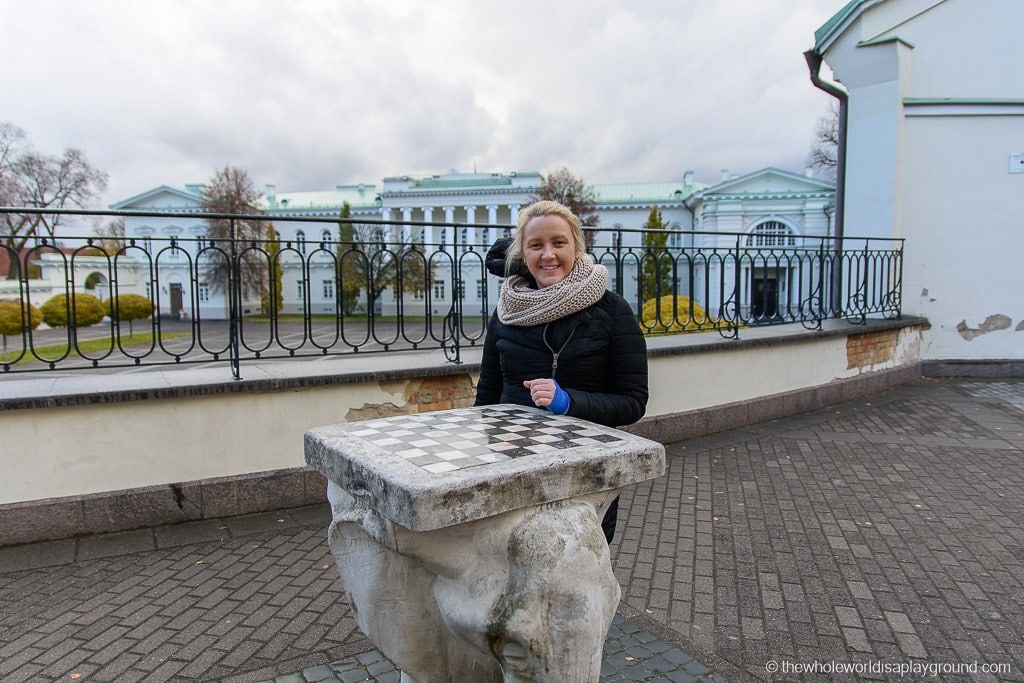 9 | The Old Town bars and restaurants

The cobbled streets of Vilnius Old Town house a fantastic collection of quirky bars and restaurants. Our favourites were the amazing Bambalynė, a mix of off licence and chilled out Lithiuain beer bar located in a cosy cellar and the atmospheric Bistro 18 which served excellent food at a reasonable price. 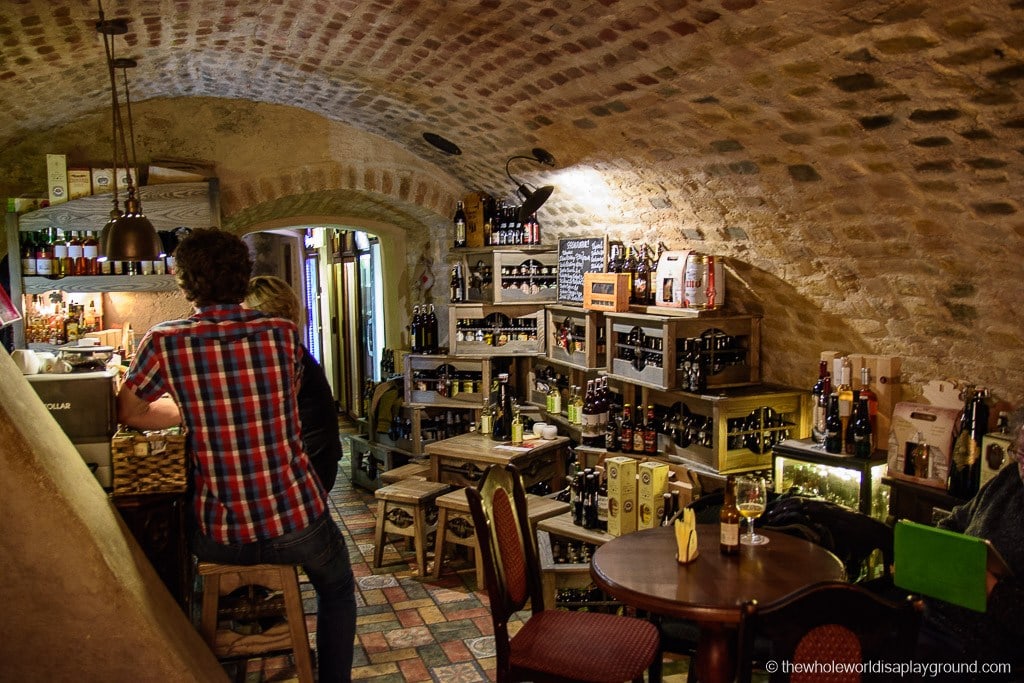 Pilies Street is the oldest street in Old Town and boasts beautiful architecture as well as lots of little shops and stalls selling their wares. The nearby Stikliu Street was once the heart of the Jewish Quarter but has since been filled with boutiques and artisan studios. 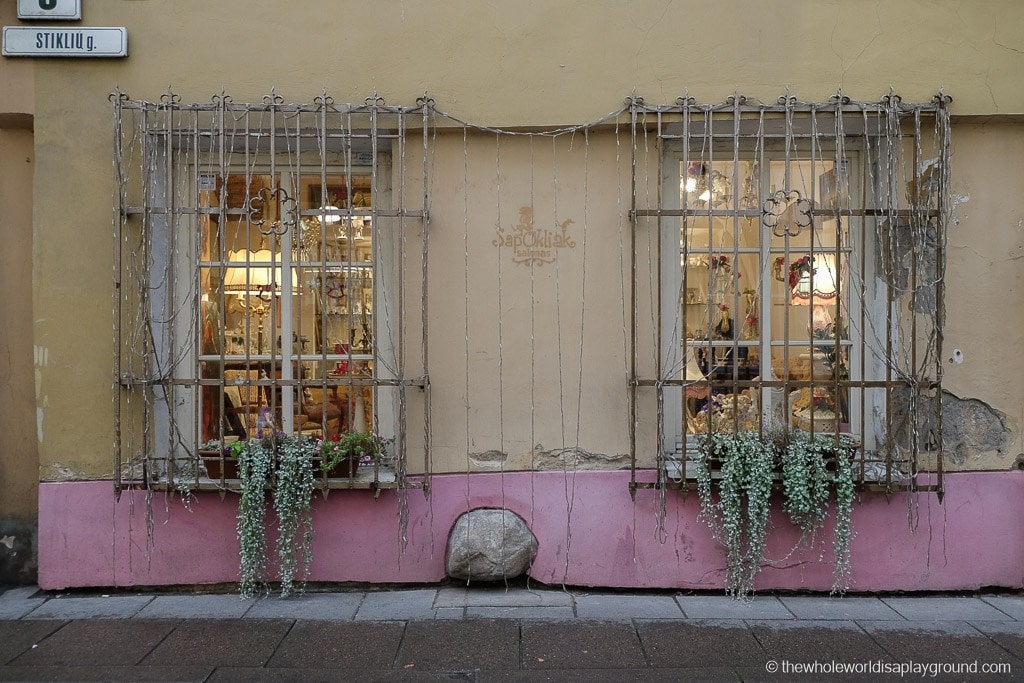 A symbol of Vilnius, three magnificent white crosses sit high on a hill above the city. According to a legend, in the 14th Century seven Franciscan friars were beheaded on top of the hill and the crosses were placed there by monks in the early 17th Century to pay tribute. It’s a steep walk to the top of the hill but the panoramic views of Vilnius make it worthwhile. 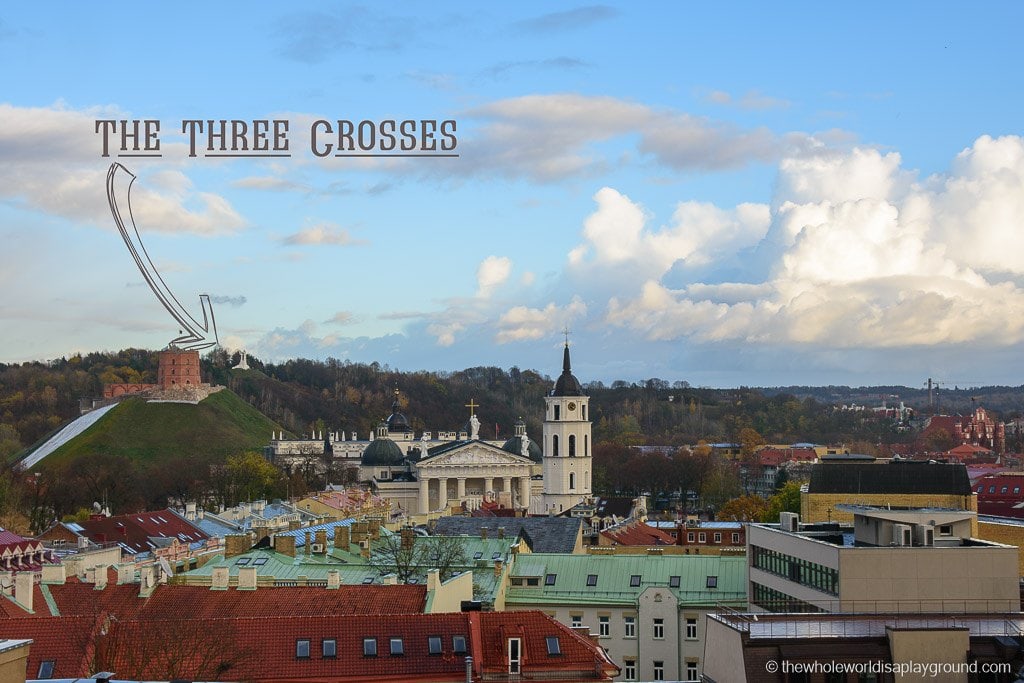 Gediminas, the Grand Duke of Lithuania in the early 14th Century, is said to have built the castle following a dream that he should build a city on the site of an earlier hunting location. The castle, perched atop a hill, boasts great views of the city. 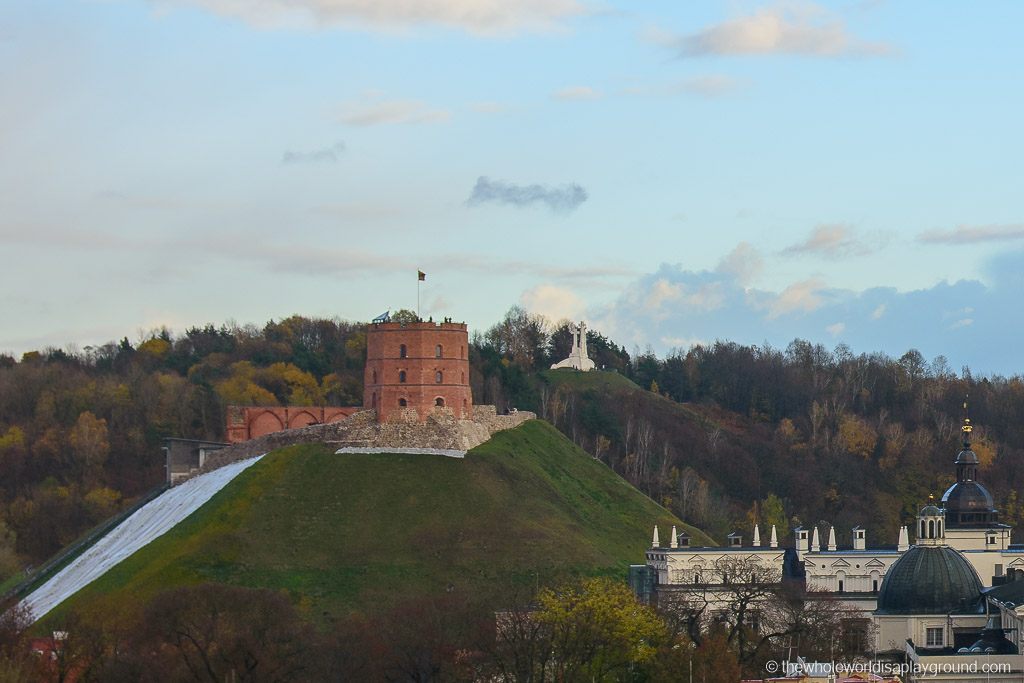 Standing at almost 327 metres, it is the tallest building in Lithuania and houses a revolving observation deck which provides views across the city. 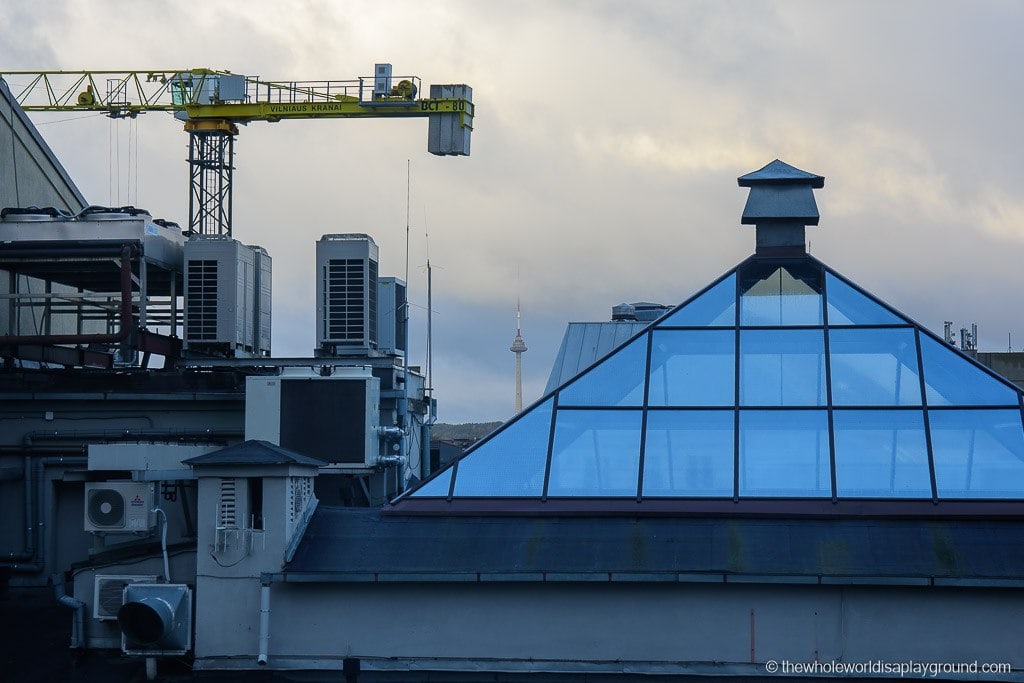 The infamous Ninth Forth stands in the grounds of the heartbreaking Kaunas Fortress about one hour from Vilnius: it was once used as a prison and a stopover for prisoners being transported to labour camps and, later, as a place of execution during the Nazi occupation of Lithuania.  Ninth Fort has now been transformed into a poignant memorial to a very dark history of Lithuania and a 100 foot tall monument dominates the grounds.

There are many heartbreaking sights: the museum houses a beautiful stained glass memorial which tells the sad fate of those who were brought to the site, a bullet ridden wall stands alongside a plaque stating ‘there near this wall Nazis shot and burned people in 1943-1944’ and an exhibit details the last moments of Romas Kalanta, a student who perished after setting himself on fire protesting against the Soviet regime in Lithuania. 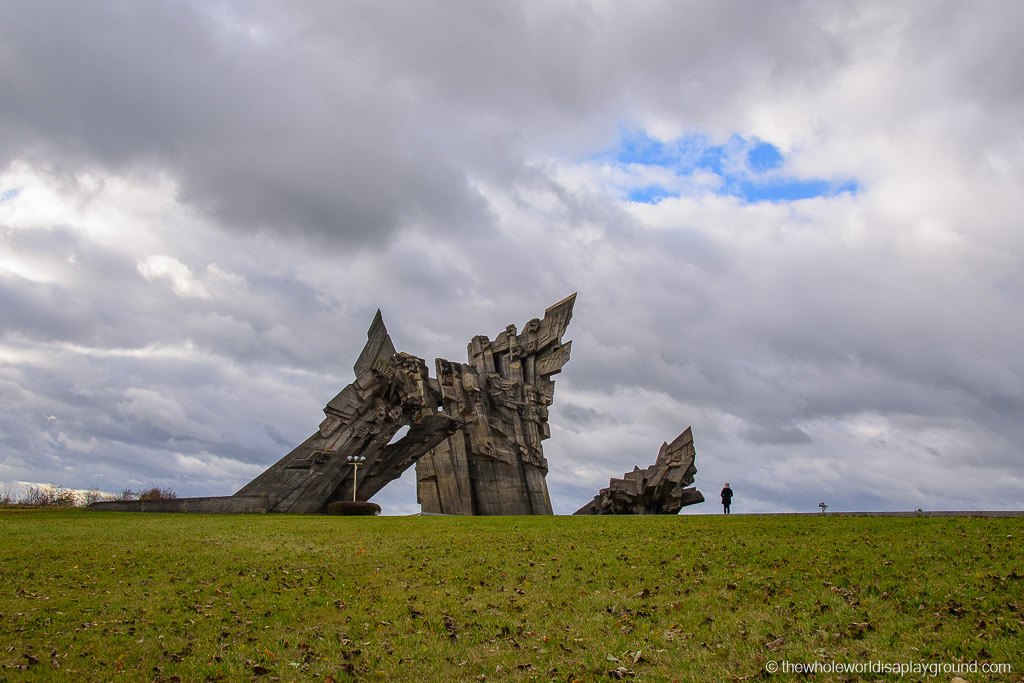 We took a detour to the UNESCO listed Struve Geodetic Arc, one of a chain of 34 which make up the UNESCO Site. This is one of the three points in Lithuania and is located in Meškonys about 30 minutes from Vilnius. We’ve been chasing them around Europe for a year and never managed to tick one off our UNESCO obsessed list! 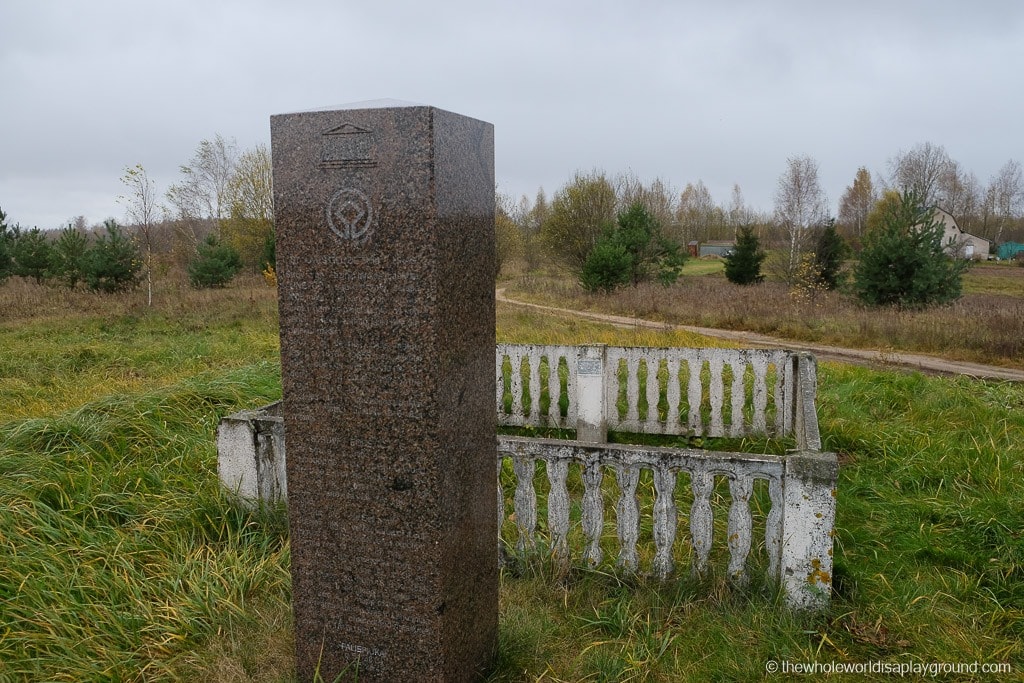