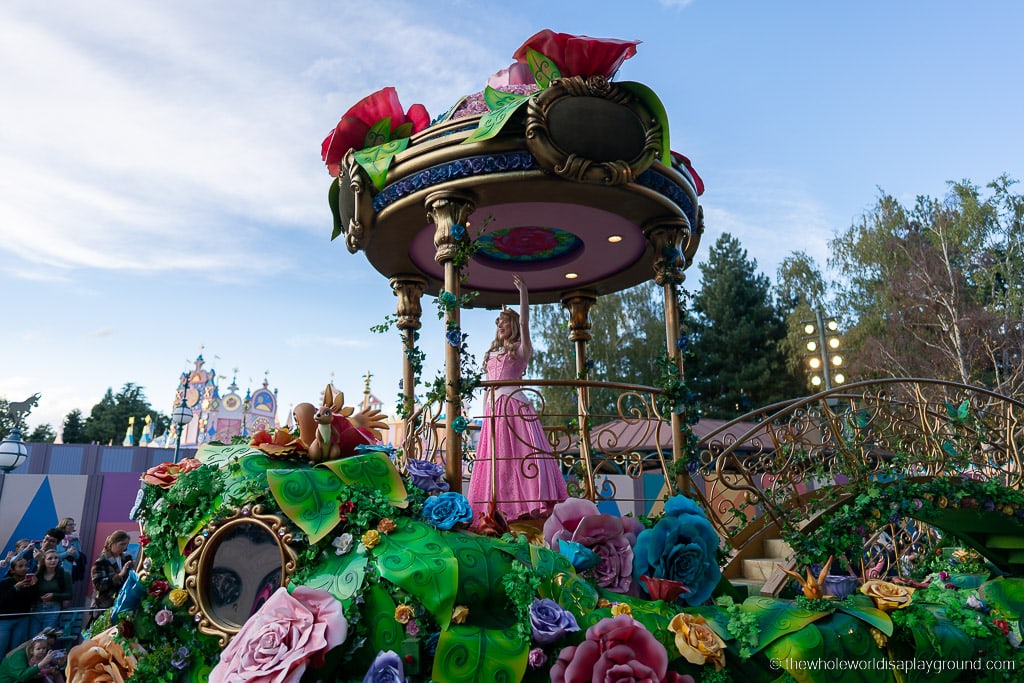 Auberge de Cendrillon, or ‘Cinderella’s Inn’, is the setting for princess dining in Disneyland Paris. It is an absolute must for princess fans and it’s one of the hottest reservations in the park. During Princess Dining guests are treated to meet and greets with 3 or 4 of the Disney Princesses and Cinderella’s mice, Suzy and Perla.

The princess dining is set in a beautiful dining hall with Cinderella’s Carriage residing in the courtyard outside. We were really impressed with the entire 3 courses of French food and the wonderful princess-themed desserts. Our kids enjoyed the fruit cocktail, the Mickey Mouse-shaped toast accompanying the salmon starter, the pasta main and the Cinderella surprise for dessert.

Many of the young guests wear prince and princess costumes for their Royal dining – we picked up some lovely (and relatively inexpensive) outfits prior to travelling. Our 5-year-old was adorable in his Prince Charming costume (check prices here!) as was our 3-year-old in her Rapuzenel dress (check prices here!). You can also purchase dresses in the park but I didn’t spot any Prince Charming costumes.

As of November 2022 (prices were updated on 29/11/2022), Princess dining costs €95 for adults and €50 for children – read more about Princess Dining on the official Disneyland Paris website here!

How to reserve princess dining at Auberge de Cendrillon

Princess dining is hugely popular and reservations can be hard to come by. There are two ways to book princess dining:

Guests staying at a Disney hotel onsite: Reservations open 12 months in advance for guests who reserve a Disney hotel and tickets package (and have paid the balance in full) – we book all our trips through the official website disneylandparis.com and add our princess and character dining at the time of booking. Along with Extra Magic Hour and the easy walk to the parks from the onsite hotel, this is one of the best perks. We’ve stayed in all 5 of the onsite hotels – if you are planning to stay onsite click here to read our guide to the best Disneyland Paris Disney Hotels.

If you have already reserved your hotel you can log into your account at disneylandparis.com and add princess dining in extras)

Other guests: Park guests staying outside of the Disney hotels (or those who reserve room-only rates, for example through booking.com) will have access to princess dining up to 1 months in advance on the app. During busy periods, it is often booked up well in advance of this although you might get a late cancellation.

Disney Princesses at Disneyland Paris tip: The Princess Pavillion is one of the most popular meet and greets in the park and the wait time generally hovers around 90 minutes to 2 hours.

There are some incredible theatre shows at Disneyland Paris and some offer the chance to see Disney Princesses live on stage – both Mickey and the Magician and Frozen: a Musical Invitation feature some of the most popular Disney princesses.

Mickey and the Magician

Belle, Cinderella and Elsa feature in the spectacular Mickey and the Magician alongside other popular characters including Olaf from Frozen, Lumiere and Beast from Beauty and the Beast, and Rafiki from Lion King.

Frozen: a Musical Invitation is a must for Frozen fans. Anna invites guests to help her surprise Elsa in this interactive show and the small theatres make for an intimate setting. It’s lovely to see the Frozen Princesses and sing along to the biggest hits (note: Let it Go is sung in French so it might be a challenge to sing along!) – check out Frozen: a Musical Invitation on the official DLP website!

The Disney Princesses star in some of the biggest parades at Disneyland Paris:

The princesses can also feature in the seasonal parades and currently star in MIckey’s Dazzling Christmas Parade.

If you want to catch a glimpse of the characters as they make their way to meet and greets, dining and live shows then you need to know about this secret spot in Disneyland Paris.

Located close to Small World and Pizzeria Bella Notte, there is a set of gates which is the location the daily parades start from. Some Disney characters also use this entrance as they travel through the park.

If you are lucky and chance upon it at the right time, you might spot a Disney Princess as they make their way to Princess Pavillion or are en route to the princess dining at Auberge de Cendrillon. The princesses are really friendly and, while they don’t have time to stop to chat, they will wave at guests as they pass by.

Other Princess-Themed Experiences at Disneyland Paris

As well as seeing the Princesses, there are a few other Princess related things to see and experiences at Disneyland Paris:

The spectacular Sleeping Beauty Castle is the icon of Disneyland Paris.

Painted in 14 shades of pink, the castle is home to a 90-foot-long dragon in the dungeon and the beautiful La Galerie de la Belle au Bois Dormant (Sleeping Beauty Gallery) on the upper floor. There is also a Christmas shop in the Castle which is open all year round.

The Sleeping Beauty Gallery, with its stained glass windows and tapestries illustrating the famous fairytale, is unmissable.

Both Disneyland and Walt Disney Studios have a face-painting station where guests can have their faces painted in a variety of Disney and Marvel-inspired themes. There are some excellent princess options which add a really special touch if your kids are dressing up for Auberge de Cendrillon or the Princess Pavillion. The face painting artists are extremely talented and our kids were spoiled with lovely compliments from cast members they met throughout the day.

Face painting is located at:

Take your prince or princess for a photo in front of Cinderella’s Carriage. It is located in the courtyard of Auberge de Cendrillon and makes for an awesome backdrop.

La Chaumière des Sept Nains, or The Cottage of the Seven Dwarves, is a magical Fantasyland shop with decor inspired by Snow White and the Seven Dwarves. The store is full to the brim of princess themed merchandise – we spotted an abundance of princess dresses, dolls, soft toys, playsets, souvenirs and accessories on our most recent visit.

10 | Princess for a day (currently closed)

The 5* Disneyland Hotel is currently closed for refurbishment. Prior to its closure, the hotel hosted ‘Princess for a Day’ makeovers for children aged 3 to 12. The package included hair, make-up and a photo, with the option of upgrading to the purchase of a princess dress.

Disney Princesses at Disneyland Paris tip: the Disneyland Hotel is due to reopen in 2024. Princess face painting (see number 8) is a cute alternative in the meantime.

In 2021 and 2022, Disneyland Paris hosted World Princess Week in celebration of the Disney Princesses and Frozen’s Queen Anna and Elsa.

Guests were treated to a Royal Promenade featuring some of the princesses in their classic Princess carriages and the Frozen parade float from Disney Stars on Parade. Aurora was in attendance outside the Sleeping Beauty Castle and there were special Magic Shots, Princess themed snacks and collectable Princess cards.

It is yet to be confirmed if World Princess Week will take place in 2023 or if it will become an annual event, so stay tuned!

Here are some of the most popular questions we get asked about the Disneyland Paris Princesses.

Which Princesses can I meet at Disneyland Paris?

Based on our experiences and from what I’ve read online these are the Disney Princesses you are most likely to see/meet at Disneyland Paris:

Can I meet Elsa and Anna from Frozen at Disneyland Paris?

As of November 2022, Olaf is the only Frozen Meet and Greet in Disneyland Paris – the enchanted snowman hosts his meet and greet in Art of Animation in Toon Studios (Walt Disney Studios).

There are no Frozen Princess Meet and Greets at Disneyland Paris however, it is still possible to see the Frozen Princesses. Anna and Elsa appear in the Disney Stars on Parade and they can also feature in the season Halloween and Christmas parades.

Disney Princesses at Disneyland Paris tip: Frozen: A Musical Invitation is extremely popular so make sure you arrive in good timebefore the performance to secure your seat. Access to the show is included in your park ticket – click here to check out Frozen: a Musical Invitation

Is there a Frozenland at Disneyland Paris?

Not yet! But in exciting news, a Frozen-themed land is under construction at Disneyland Paris. Work is currently underway on the Kingdom of Arendelle and attractions will include an Elsa Ice Castle, Royal Meet and Greets and a Tangled ride.

Is there a Bibbidi Bobbidi Boutique at Disneyland Paris?

Bibbidi Bobbidi Boutique is unique to Disneyland in the US, the Princess for a Day experience at the Disneyland Hotel (currently closed as hotel is under refurbishment) is the closest offering at Disneyland Paris.

Disney Princesses at Disneyland Paris tip: the Bibbidi Bobbidi Boutique in Disneyland Florida offers makeovers for 3 to 12 year olds and guests can have their hair, makeup and nails styled as well as choose a princess dress and accessories.