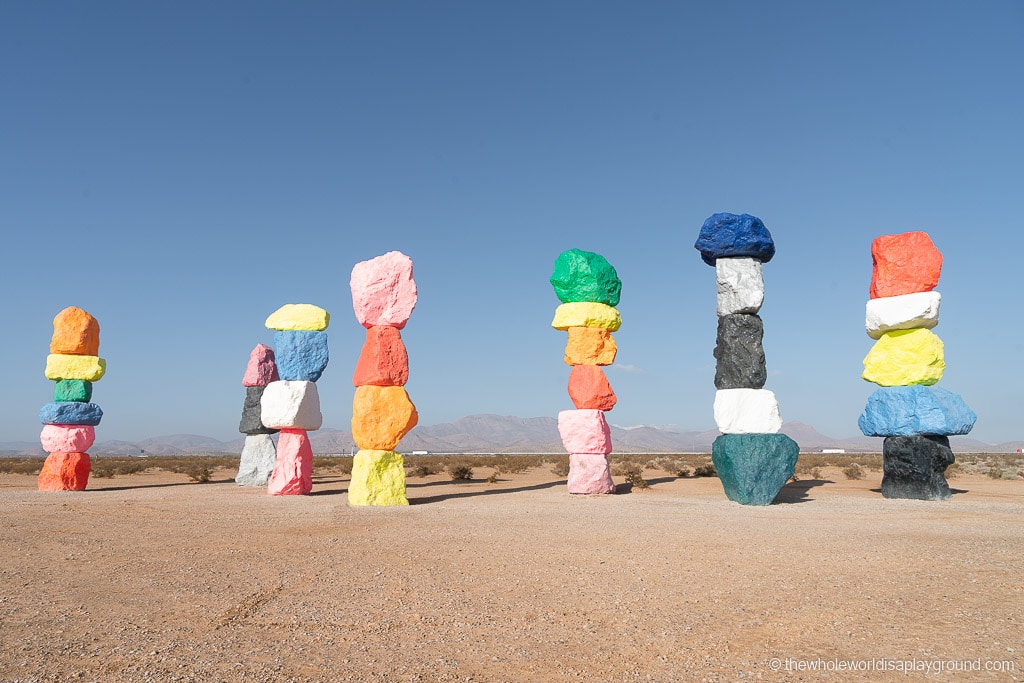 Seven Magic Mountains is an art installation consisting of seven giant towers of stacked neon boulders rising playfully over the surrounding Nevada desert. It was created as a public art installation by Swiss artist Ugo Rondinone and has been a Vegas icon since its opening in 2016.

Seven Magic Mountains is a public art installation by Swiss artist Ugo Rondinone. It is made up of huge colorful neon boulders stacked in seven giant towers which soar over 30 feet above the Nevada Desert.

According to the artist, the Seven Magic Mountains represent the meeting of artificial and natural, the passing highway traffic, and the surrounding mountains and lakes. The locally-sourced boulders were arranged and painted on site.

It’s fun, free and colorful and it’s amazing to see the colorful boulders against the backdrop of the Nevada desert.

Seven Magic Mountains opened in 2016 and was initially considered a temporary art installation. Its ongoing popularity has seen its run extended time and time again. It is currently scheduled to remain on show until the end of 2021 but there are plans in progress to extend its run in the Nevada Desert to 2026.

Visting Seven Magic Mountains tip: we will update our article when the information on the extension is released.

How to get to Seven Magic Mountains

Seven Magic Mountains is located on the South Las Vegas Boulevard, NV 89054 along Interstate 15. It is 22 miles from the Bellagio at the center of the Strip.

We rented a car in Las Vegas using RentalCars.com. We wanted to visit other sights, such as Valley of Fire, off the Strip, and then we continued our journey with a Utah National Parks road trip.

We’re huge fans of road trips and have driven rental cars in over 40 countries. We mostly use RentalCars.com to reserve our car as they have the best selection and prices that we’ve found – check prices here!

Visting Seven Magic Mountains tip: we picked up and dropped off our rental car in different locations (we dropped off in Salt Lake City after visiting the Utah National Parks!) so we paid a small one way rental fee. It’s usually cheaper to rent and return the car in the same location and Vegas car rentals can be inexpensive when demand is at regular levels.

Parking: there is a parking lot adjacent to the Seven Magic Mountains art installation. Parking is free.

Tours which include Seven Magic Mountains

There are some tours departing Las Vegas which visit Seven Magic Mountains. The best options include:

Seven Magic Mountains is open 24 hours a day, 7 days a week. It is only recommended to visit between sunrise and sunset as there is no lighting at the installation after dark.

Avoid visiting during adverse weather conditions as there is nowhere to take cover during rain, wind or storms.

Do I need a ticket to visit Seven Magic Mountains?

Weekday mornings are the best time to visit Seven Magic Mountains. The lighting is good for photos and it tends to be quiet at the site.

Seven Magic Mountains can get extremely busy at weekends and later in the day and, as well as the sun making photographs difficult, it can be hard to get a clear shot without tons of other people in it.

If you catch a good sunset late evening is a magical time at Seven Magic Mountains.

How long to spend at Seven Magic Mountains?

Seven Magic Mountains is a popular photography location and, if you’re an Instagram fan, is one of the best Instagram spots in Las Vegas.

Professional photography equipment including tripods and lighting umbrellas are not permitted at Seven Magic Mountains.

Drone photography was still allowed at the time of our most recent visit. Make sure to check the current rules if plan to use a drone.

Yes, the colorful boulders appeal to all ages and the flat site is easy for kids to navigate. We last visited when our eldest was 2 and he loved running around and guessing the colors of the boulders!

Is there anywhere else to visit close to Seven Magic Mountains?

If you have a rental car, it is relatively easy to add a few stops and make a day of it.

Some of our favorite places to visit nearby include:

Once a thriving mining town, Goodsprings once boasted a population bigger than Las Vegas. Lead, copper, zinc, gold and silver have all been mined in the area. Stop by the Pioneer Saloon which is considered one of the oldest saloons in Nevada. Goodsprings is 20 minutes West of Seven Magic Mountains.

If you are venturing a little further afield, a second ghost town, Nelson in the Eldorado Canyon, is 1 hour East of Seven Magic Mountains.

The incredible Valley of Fire State Park is located 50 miles north of Las Vegas and is a 1 hour 15 minute drive from Seven Magic Mountains. When the park’s red Aztec sandstone catches the sunlight it illuminates the valley and it looks like it is on fire, hence the name Valley of Fire.

Red Rock Canyon is a 35 minute drive from Seven Magic Mountains. Covering almost 200,000 acres of the Mojave Desert, the 180 million year old Aztec Sandstone cliffs have a distinct red color due to iron oxide being present in the rock.

The 13 mile scenic loop can be explored by car and is a great way to experience many of the canyon’s highlights. If you want something more physical, there are 26 hikes and trails. As well as Red Rock Canyon State Park there are lots of National Parks near Las Vegas.