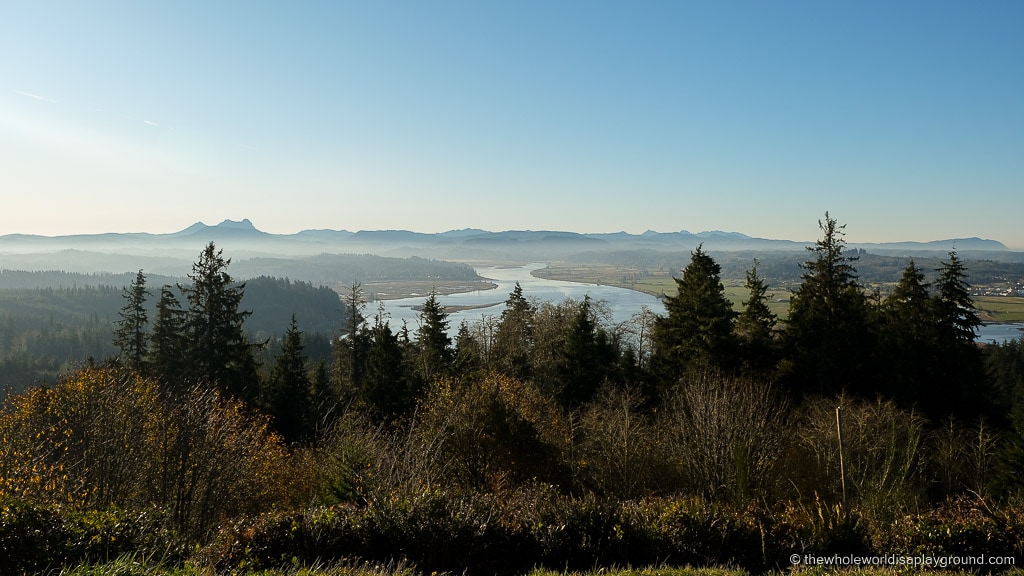 Located at the mouth of the Columbia River and surrounded by nature and history, it’s not surprising that there are lots of fun and interesting things to do in Astoria. From the dizzy heights of the Astoria Column to the quirky downtown Astoria, Astoria is a fantastic stop on any Oregon road trip.

We stopped in Astoria after a fun week in Portland and before we started our road trip down the Oregon Coast. The historic city is an Oregon highlight and these are our 13 best things to do in Astoria, Oregon!

13 Best Things to do in Astoria

From reliving the 80 movie class the Goonies to climbing the Astoria column and wandering through the historic downtown, these are our 13 favorite things to do in Astoria, Oregon! Astoria can also be visited as a day trip from Portland.

The 125 foot tall Astoria Column towers over the city from its vantage point on Coxcomb Hill. The exterior of the tower illustrates significant events from the history of Astoria and Oregon. Inside, a tiny spiral staircase with 164 steps leads to the tower’s observation deck. The panoramic views over Astoria, the magnificent Astoria-Megler Bridge and the mouth of the Columbia River are incredible.

Entry to the column is free but a $5 parking fee is charged upon entry to the park surrounding the Astoria Colum. The park is open from dawn to dusk daily.

Things to do in Astoria tip: the park’s gift store sells $1 gliders and, in keeping with tradition, visitors can send them flying from the observation deck and watch where they go! 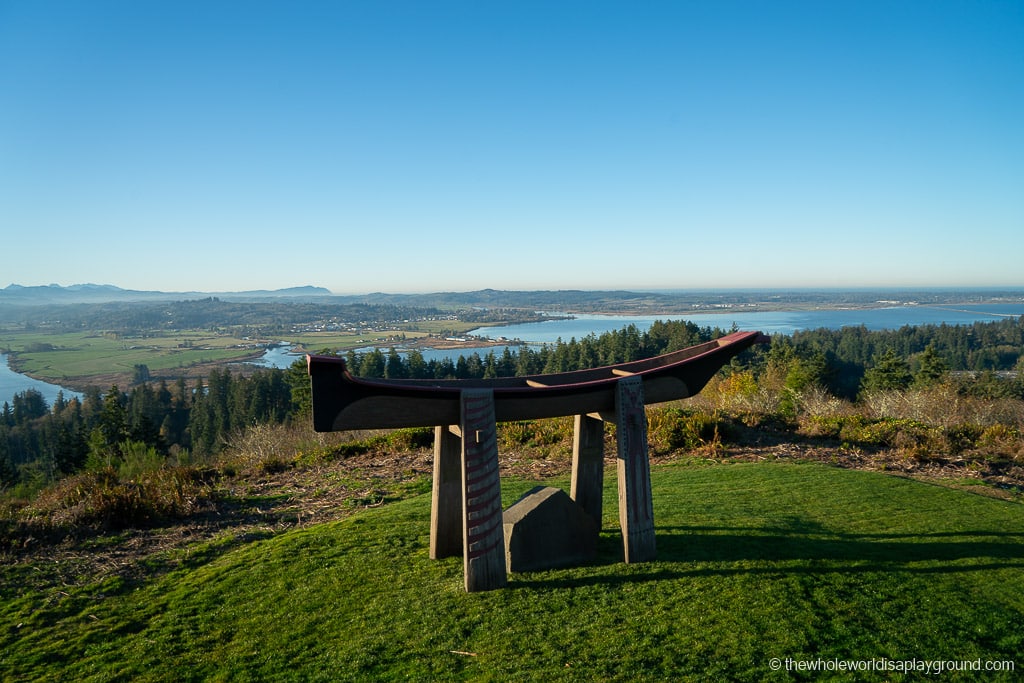 Where to Stay in Astoria

There are a number of great options for anyone planning to stay overnight in Astoria while exploring the Oregon Coast.

The lively open air Astoria Sunday Market runs between May and October and it’s a fantastic way to spend a Sunday afternoon. Vendors sell local produce and crafts and there’s lots of food options as well a music stage showcasing local artists.

If, like us, you are nostalgic for the 1985 movie classic that brought the world the ‘Truffle Shuffle’ then Astoria is going to rock your world! The Goonies was almost entirely shot in Astoria, Oregon and the Goonies filming locations are still instantly recognizable.

Stop by County Jail where Jake was held and the Flavel House Museum where Mikey’s Dad worked. There’s also the Bowling Alley, the Lower Columbia Bowl, where Chunk had the milkshake incident and the nearby Cannon Beach is the spot where the Goonies bike out to in search of the One Eyed Willy’s hidden treasure.

Things to do in Astoria tip: Mikey’s House and Data’s house are still there although they are private properties. Mikey’s house has been hit and miss recently so do respect the owner’s wishes if you decide to visit. We decided to respect the owners wishes and didn’t walk up to the house. You can see the house from the road below

The Oregon Film museum, located in the old Clastop County Jail in Astoria, is dedicated to movies made in Oregon. Astoria is synonymous with the Goonies and other classics filmed in Oregon include Kindergarten Cop and Free Willy. The building was once a working jail and, is instantly recognisable from the Goonies jail scenes! It’s a must for nostaglic Goonies fans and film buffs!

Fort Stevens State Park is also home to the Peter Irdale, the shipwreck of a boat which ran ashore in October 1906 amid strong gales. All the crew were brought to safety and the Captain toasted the ship with the words ‘May God bless you and may your bones bleach in the sands’. The skeleton of the boat remains on the beach 104 years later.

The magnificent Astoria-Megler Bridge connects Oregon and Washington. It is a beautiful addition to the Astoria Skyline and, when crossing by car, offers great views of the Columbia River below. 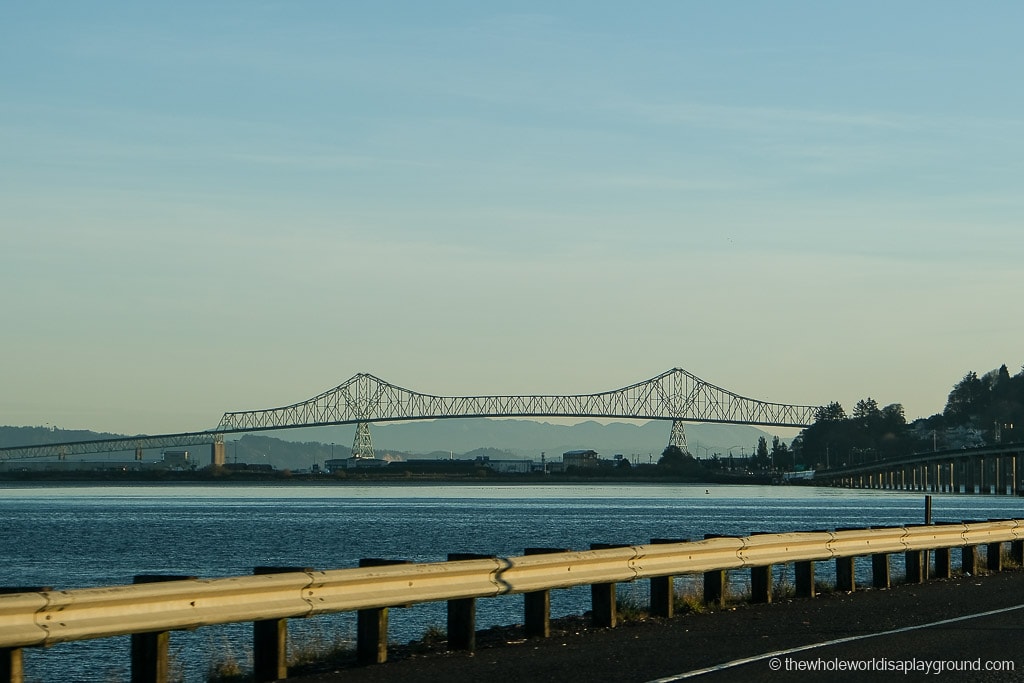 The Oregon Coast is renowned for its rugged coastline and crashing waves and the exhibits in the waterfront Columbia River Maritime Museum offer an insight into its waters. It’s not just for maritime buffs: we really enjoyed our visit and the exhibits!

There are some fascinating exhibits in the museum. Crossing the Bar: Perilous Passage focuses on the Columbia River Bar where the river meets the Pacific Ocean and conditions are treacherous. We also loved the weather exhibit where we attempted to deliver a weather forecast as well as the Coast Guard Rescue Squad. After seeing the Peter Irdale and seeing an actual shipwreck, we were amazing at the museum map illustrating the 50 shipwrecks and loss of life alone the coast.

The historic Columbia, which once served as a floating lighthouse at the Columbia River Bar, is docked outside and a tour of the boat is included in the museum ticket. 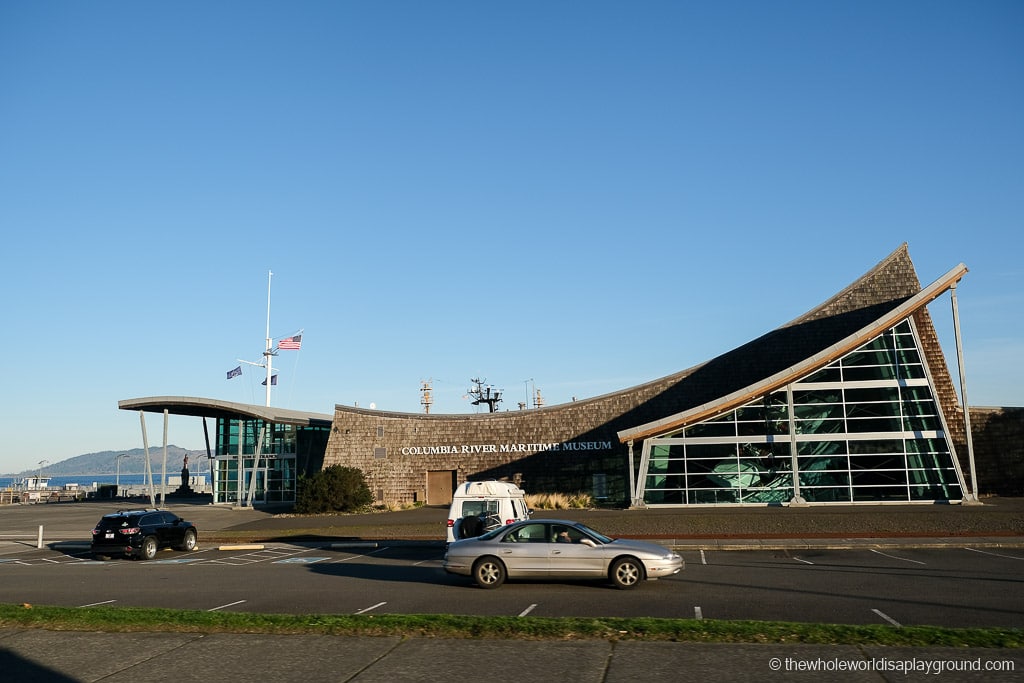 This fish and chip shop has the quirky setting of a fishing boat parked on a patch of grass across from the Columbia River Maritime Museum. Serving up delicious beer battered fish accompanied by chunky steak fries, we declared Bowpicker among the best fish and chips we’ve eaten on our travels and an Astoria must do!

Things to do in Astoria Tip: we managed to grab a spot at the picnic table and enjoyed our fish and chips with a great view of the water. Make sure to bring cash! 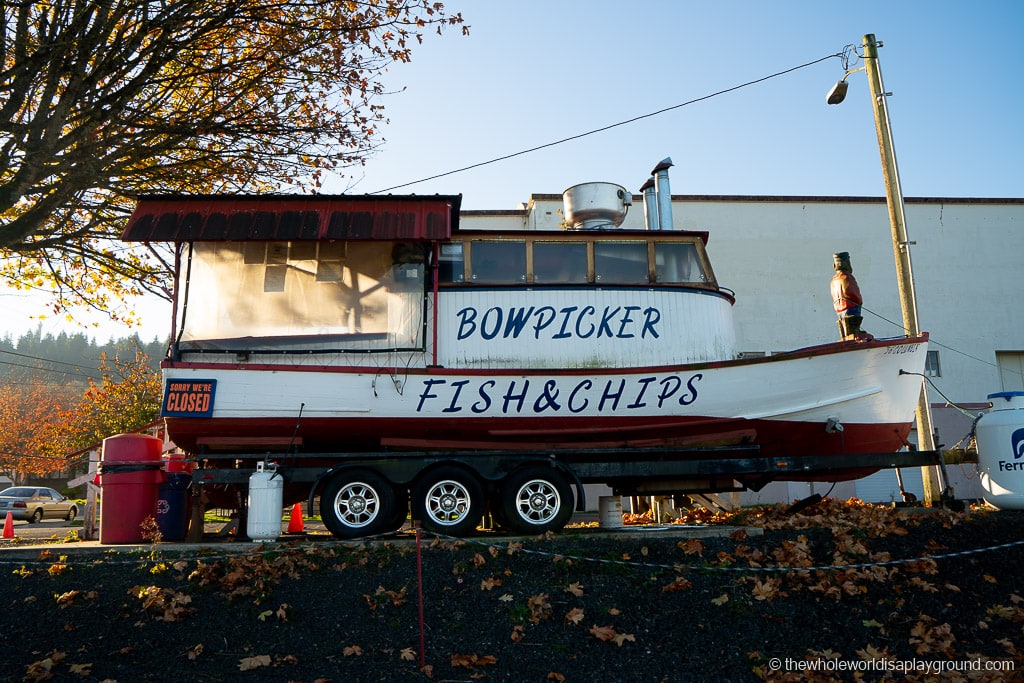 Occupying an entire block in Astoria, the Captain George Flavel House Museum was built by George Flavel. George Flavel was a maritime pilot who is credited with the early passages through the Columbia River Bar which marks the dangerous journey from the ocean to the river. The historic house is filled with period furniture and artefacts and offers a glimpse into the dwelling of a wealthy family in the 1800s. It is one of the best examples of Queen Anne architecture in Oregon and is surrounded by 9 trees which Flavel collected on his voyages. 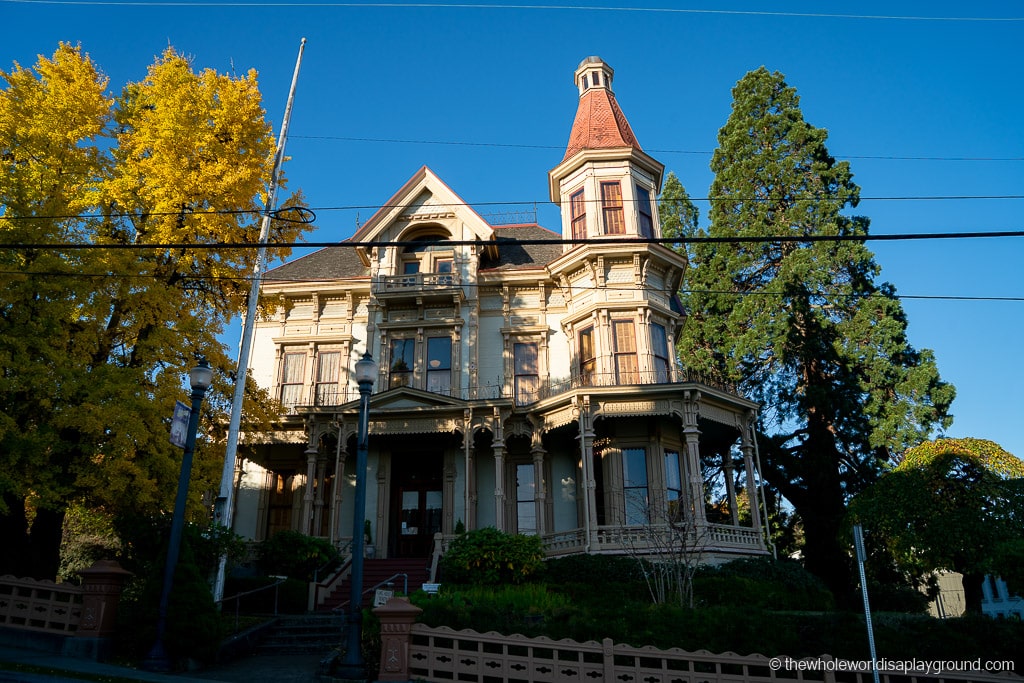 The Astoria Riverfront Trolley, Old 300, runs along the Columbia River waterfront transporting passengers along a 3 mile route which includes the Maritime Museum and shops and restaurants. We had fun spotting seal lions and seals on the dock and catching an up-close view of the Astoria-Megler Bridge.

Things to do in Astoria Tip: if you prefer to stretch your legs, take a stroll along the Astoria River Trail. Part of the trail overlaps with the trolley and passes museums, restaurants and breweries.

The beautiful Cannon Beach is just 40 minutes south of Astoria and is one of the most stunning parts of the Oregon coastline. The relaxed beach town is a fun place to hang out and has lovely restaurants, art galleries and boutiques.

Haystack Rock, a majestic 235 foot sea stack stands tall in the Cannon Beach waters and is a symbol of the Oregon Coast. At low tide, colorful tidepools showcase a world of starfish, crabs and urchin while the birdlife on the rock itself includes Tufted Puffins, Brown Pelicans and Bald Eagles.

Things to do in Astoria Tip: Haystack Rock is protected as part of the Oregon Islands National Wildlife Refuge and it is common to see representatives from the Haystack Rock Awareness Program during low tide. They are there to educate and remind visitors to stay a respectful distance from the marine life and bird life that reside in the area. 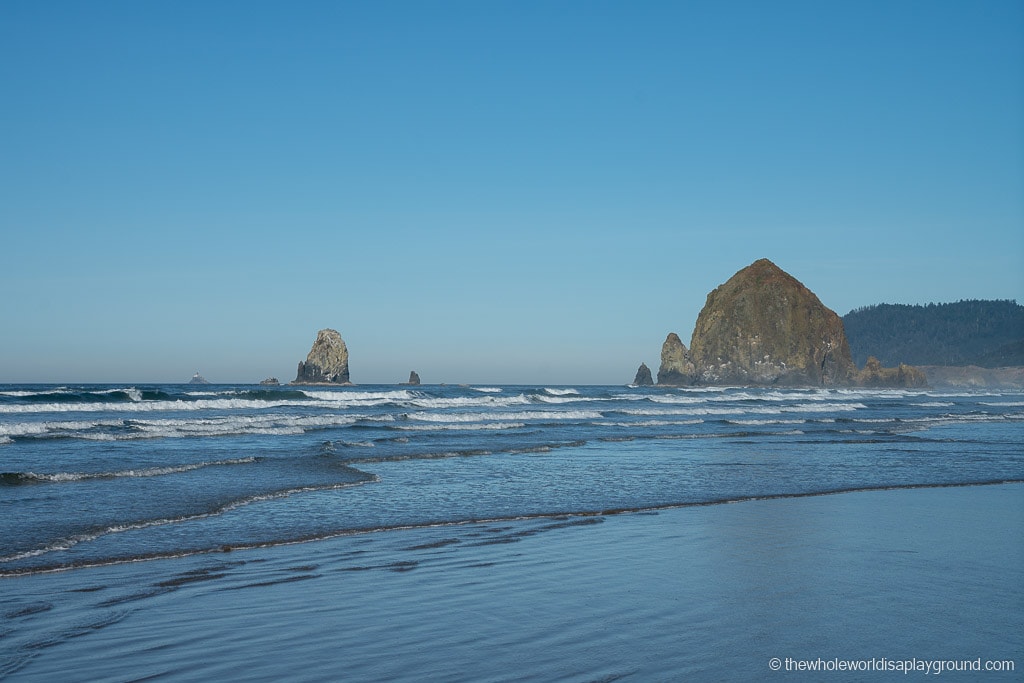 The Lewis and Clark National Historic Park comprises 12 sites along the Pacific Coast which retrace the steps of the 1804 to 1806 Lewis Clark Expedition. The expedition, led by the Corps of Discover, was the first American expedition to cross the western portion of the United States.

Fort Clatsop in Astoria served as a winter encampment for the expedition. A replica of the original fort was created based on the expedition notes and the visitors center shares informative videos and displays.

There is also a 6.5 mile Fort to Sea Trail and a 1 mile Netul River Trail to explore. 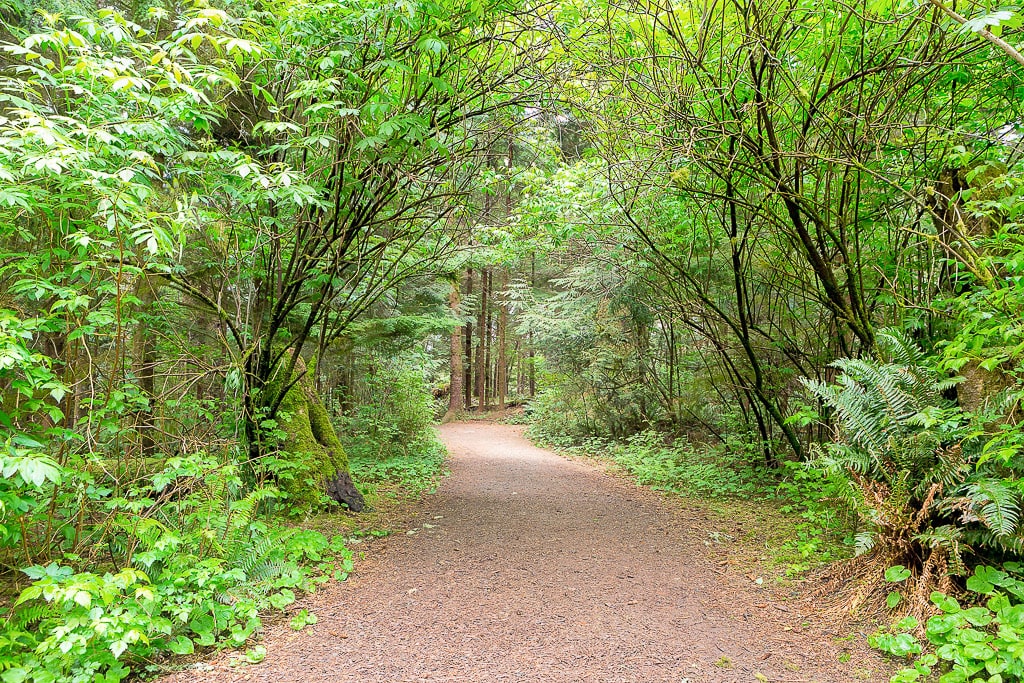 The quirky and loveable beach town of Seaside is just 30 minutes drive from Astoria and is well worth a visit. Arriving in Seaside feels like a step back in time and it is one of our favorite places on the Oregon Coast. Seaside’s beach is one of the best on the coast and the 1.5 mile promenade walk is fun and nostalgic. The main street has lots of independent stores, a shooting gallery, a traditional carousel and an awesome ice cream parlor.