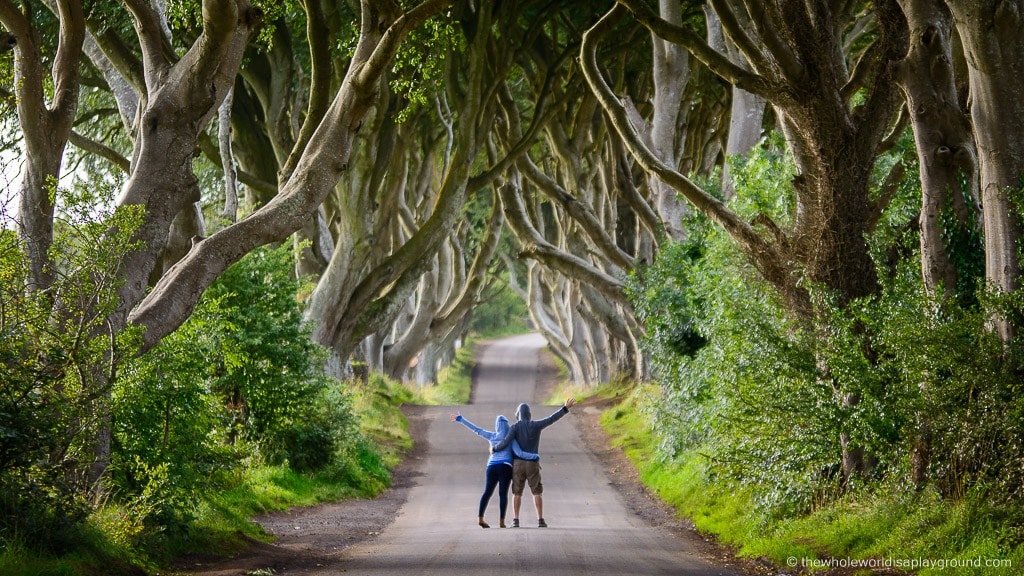 The Causeway Coast, located along the north Antrim coast of Northern Ireland, is truly one of the world’s best roadtrips. Alongside its world famous sites like the Giant’s Causeway and the Carrick-a-Rede Rope Bridge the Causeway Coast is full to the brim of secret sights and surprises and we made it our mission to find the best of its hidden gems! Here’s our guide to 5 of the best and less well known tourist attractions on the Causeway Coast!

Tucked away between White Park Bay and Ballintoy Harbour is the incredible Elephant Rock, a rock formation so called because it looks just like an elephant! Legend has it that the rock formation is the remains of an ancient elephant fleeing a volcanic eruption but we’re inclined to believe it’s the forces of nature at play! Either way, it’s one of the most mesmerising sites on the Causeway Coast.

How to get to Elephant Rock: from Ballintoy Harbour follow the coastal path west towards White Park Bay. After crossing two fences you will find the rock formations, including Elephant Rock, in the sea.


Rathlin Island, the most northern point in Northern Ireland, is the only inhabited offshore island in Northern Ireland and is home to just 140 people. With its fantastic bird sanctuary, the picturesque lighthouses and playful seals in the harbour Rathlin is a real treat. The simplicity of the island, the wildlife and the slower pace of life feels like taking a welcome step back in time and, when the sun shines on Rathlin, there’s few places more beautiful on the planet!

How to get to Rathlin Island: a ferry runs between Ballycastle and Rathlin Island multiple times a day weather permitting. Vehicles are only permitted if staying more than 6 nights or if any of the occupants are blue badge holders but a bus service runs from the ferry to the tourist spots or, if you are feeling energetic, bikes are available to rent!

Where to stay on the Causeway Coast


Located at the end of a secluded road, the ruins of Kinbane Castle are perched on a narrow limestone headland jutting over the sea. The Castle was built in 1547 and the passage of time as well as multiple sieges over the years mean there is little left but ruins. The spectacular views of Rathlin Island and Dunagregor Iron Age fort as well as the sense of history make the climb to the intriguing and picturesque ruins worthwhile.

How to get to Kinbane Head: halfway between Ballycastle and Ballintoy a sign stating no buses marks the entrance to the winding road for Kinbane Head.


With its ancient sand dunes and beautiful coastline White Park Bay is a gem but there’s a secret highlight of afternoons on the gorgeous beach: the local cows leave their green grasses behind the sand dunes and meander onto the beach for a change of scenery! The sight of a herd of cows sunbathing never fails to warm our hearts and it’s always a favourite moment of our visits to the Causeway Coast!

How to get to White Park Bay: White Park Bay is a few miles west of Ballintoy Harbour and the beach is a steep walk from the car park above. If you want to see the cows on the beach they’re most likely to wander down in the afternoon but, given that it’s up to them if and when they want to venture past the sand dunes, sightings are not guaranteed!


Towering 600 feet above the sea, Fairhead Cliffs are Northern Ireland’s highest cliff face and make for a breathtaking coastal walk along the Grey Man’s Path with stunning views of the coastline, Rathlin Island and Murlough Bay. Remote and ruggedly beautiful, the cliffs gained notoriety when they appeared in Season 7 of Game of Thrones.

How to get to Fairhead Cliffs: between Ballycastle and Torr turn onto the Fairhead Road and continue until you come to a small car park owned by a local farmer who kindly lets walkers park on his farm in return for a small fee.

For more on the Causeway Coast check out: