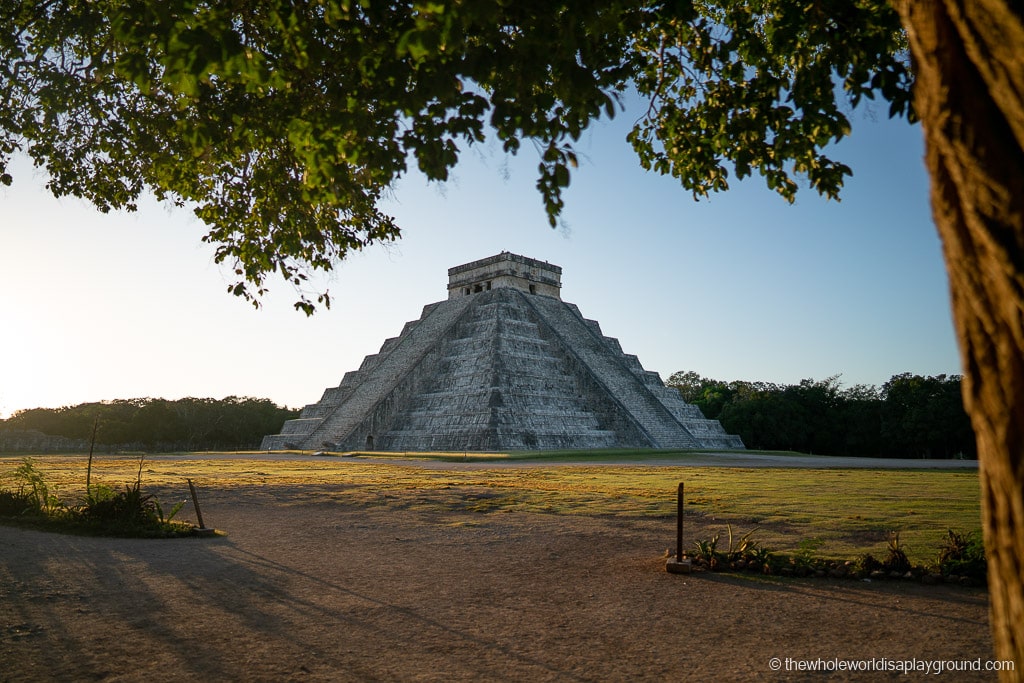 From the ancient ruins in the city itself to the stunning cliffside Tulum archaeological site and the jungle surrounds of Muyil in Sian Ka’an, there are some incredible Mayan Ruins near Cancun. The archaeological sites, which house the remains of ancient Mayan cities, offer a remarkable insight into the Mayan civilization and are a highlight of any Cancun visit.

For those of you planning your own trip, make sure to check out our list of Mayan Ruins near Cancun and add some to your itinerary!

The El Meco, El Rey and the San Miguelito Ruins are located in the resort town of Cancun:

El Meco dates back as far as 200 AD when it emerged as a small fishing village and the site is believed to have been used for maritime navigation. The well-preserved site is home to a 40-foot tall pyramid, El Castillo, which is the tallest archaeological structure in Cancun and, at the time, was considered the lighthouse of the area.

Located in Cancun’s Hotel Zone, San Miguelito was once a thriving city and flourishing maritime community which dates back to the 13th Century. The site is split into four areas: the North, South, and Dragon Complexes and the Chaak Palace Grouping. The South Complex is the highlight with its three-story pyramid.

The excavated ruins of a pre-Columbian Mayan settlement, the site contains 47 structures that visitors can walk among.

For more on Cancun, check out our guide on the top things to do in Cancun.

Mayan Ruins near Cancun tip: El Meco and El Rey are temporarily closed at present. Make sure to check for the latest information on the current opening status if you are planning to visit either site.

Cancun is the perfect base from which to visit some of Mexico’s most renowned Mayan ruins:

The popular beach town of Tulum is home to one of the most famous Mayan ruins near Cancun, the Tulum Archaeological Zone. With a spectacular cliffside location and their vantage point over the Caribbean Sea, the Tulum Ruins are one of the most unique and important sites in the Yucatan. The Mayan ruins date back to the 13th Century and it was one of the last cities inhabited by the Maya people.

There are over 60 restored structures in the Tulum Archaeological Zone. The 13th Century walled city ruins include the Castillo, a castle perched on the cliff edge that was once a watchtower, and the well preserved Temple of the Frescoes with its surviving murals.

Mayan ruins near Cancun tip: a set of wooden stairs close to the Castillo lead down to the tiny Playita Tortuga beach. The beach is protected during the summer months for nesting sea turtles but it is possible to swim at other times of the year.

For more on Tulum, check out our guides to the best things to do in Tulum and the best cenotes near Tulum.

The ancient ruins of Muyil are located in the beautiful Sian Ka’an Biosphere, a UNESCO World Heritage Site just 10km south of Tulum and around 2 hours drive south of Cancun.

Sian Ka’an, the largest protected area in the Mexican Caribbean, is one of the earliest and longest inhabited ancient Maya sites on the east coast. The original Mayan inhabitants named it Sian Ka’an, or ‘Origin of the Sky’, and the reserve is also home to quiet beaches, a coral reef, and an animal population that includes turtles, land crabs, and crocodiles.

Muyil is one of 23 archaeological sites of the Maya Civilisation in the Reserve, with the earliest dating back to 350BC. Its waterways formed an important trade route between the coastal city of Tulum and the interior. The highlight of Muyil includes the towering Castillo, the Observation Tower, and the raised boardwalk which navigates through the lush jungle.

Once the most populated city in the Yucatan Peninsula, Chichen Itza is among the world’s most famous Mayan archaeological sites. The Mayan ruins are a UNESCO World Heritage Site and one of the New 7 Wonders of the World.

It is thought to have been founded sometime between 4th the 6th Century and was one of the largest Maya cities acting as an important center for economic and political activity. There are 26 ruins on the site including El Castillo, the Temple of Warriors, the Great Ball Court and the Observatory. The instantly recognizable El Castillo pyramid is one of the greatest sights on the Yucatan and the nearby Cenote Ik Kil is also spectacular.

Chichen Itza is a 2 hour drive 50 minute drive from Cancun but it is absolutely worth the journey and is one of the most popular day trips from Cancun. A visit to Chichen Itza is truly a highlight of any Yucatan itinerary.

The ancient Maya site of Coba is located 50km northwest of Tulum, a 2 hour 15 minute drive from Cancun.

Coba is considered one of the most important Mayan ruins on the Yucatan Peninsula. Located deep in the jungle, Coba was estimated to have a population of 50,000 at its peak although much of the site remains undiscovered.

The Coba highlights include a bicycle ride through the jungle, seeing Nohoch Mul, Coba’s 137 foot tall pyramid and the tallest Mayan structure in the Yucatan, and a visit to the nearby cenotes: Cenote Tamcach Ha, Cenote Choo Ha, and Cenote Multum Ha make up a series of three cenotes located close to the ancient Mayan ruins at Coba.

Mayan ruins near Cancun tip: until recently it was possible to climb Nohoch Mul, Coba’s tallest structure. It has now been closed off.

There are two sets of ruins in Playa del Carmen, Xaman-Ha and Xcaret:

Also known as Playacar ruins, Xaman-Ha is the ruins of a pre-Columbian Maya settlement in the Riveria Maya town of Playa del Carmen, 1 hour south of Cancun.

The site is thought to have been established during the 13th Century and was an important entry point to Cozumel where pilgrims departed to honor the Goddess Ixchel. It was also an important fishing community on the trade route between Cancun’s El Rey and El Meco and Tulum’s archaeological sites.

Today, three of the original eight groups of structures remain. The ruins are well weathered and the site small but its still impressive to see a piece of Maya history on the Riviera Maya.

Mayan ruins in the Riviera Maya tip: entry to the Xaman-Ha ruins is free.

The Xcaret Eco Park is located a few miles south of Playa Del Carmen and is one of the best things to do in the Riviera Maya. Xcaret is an incredible mix of a water park, cultural attractions, thrill-seeking adventures, and amazing nature.

Originally known as Polé, the ruins at Xcaret date back to sometime between the 15th and 16th centuries when it acted as a ceremonial center for the Mayan people. Similar to Xaman-Ha, it was a departure point for Cozumel and those en route would stop to bathe as a way to purify themselves before continuing to Cozumel to worship the Mayan goddess Ixchel.

Xcaret is an excellent place to spend the day: as well as the ruins there are three underground rivers, an aquarium, a butterfly garden, and boat trips along a paradise river. The cultural attractions include a spectacular evening show, a traditional Mexican cemetery, and reenactments of the traditional Mayan ballgame – check out Xcaret tickets and transport prices here!

Mayan Ruins near Cancun: due to its unique location within the eco park, the ruins at Xcaret are one of the lesser visited Mayan ruins near Cancun. Entry to the ruins is included as part of Xcaret entrance tickets. When we visited previously it was also possible to pay a separate entrance fee to enter only the ruins but you should confirm this is still the case if you are planning to visit independent of the eco park.

Isla Mujeres is a hugely popular day trip from Cancun and, if you take a day trip to the island, you can check out one of the most unique Mayan ruins near Cancun.

Punta Sur is a rocky outcrop at the southern tip of Isla Mujeres and is home to the weathered ruins of Ixchel Temple. Ixchel is the Mayan Goddess of the Moon and the wife of the Sun and was viewed as a fertility goddess. For years Mayan women came to the island on pilgrimage to seek her help.

For more on island life, check out our guide to the best things to do in Isla Mujeres and details on how to get to Isla Mujeres.

The ancient Mayan city of Ek Balam is located 2 hours 15 minutes west of Cancun. It was founded in the 3rd Century BC and its name means ‘Black Jaguar’.

At its peak, Ek Balam is thought to have had 20,000 residents and was operational for almost 1,000 years. There are 45 structures in Ek Balam and the tomb of  Ukit Kan Leʼk Tok’, the ruler of Ek Balam in the 8th century, was discovered in the Acropolis, the largest of these structures. The stucco facade of the Acropolis is adorned with incredible artwork and some wall murals still remain in its rooms. Climbing the 6 level acropolis is a highlight and the views of the surrounding ruins and jungle are magnificent.

The island of Cozumel is just a short ferry ride away from Playa Del Carmen on the Riviera Maya and is another popular day trip from Cancun.

San Gervasio, on the north of the island, is dedicated to the Mayan goddess Ixchel and a stop at both Templo Nohoch Nah and Ka’Na Nah Templo de Ixchel are highlights – the first is was used as an altar for offerings and the second, the largest structure on the site, is thought to have been dedicated to Ixchel.

On the southwest of the island, El Cedral is home to Cozumel’s oldest Mayan ruins which date back to 800 AD and were once the capital of the island.

The site is small and contains only the ruins of a small structure but it is thought to have been an important ceremonial site.